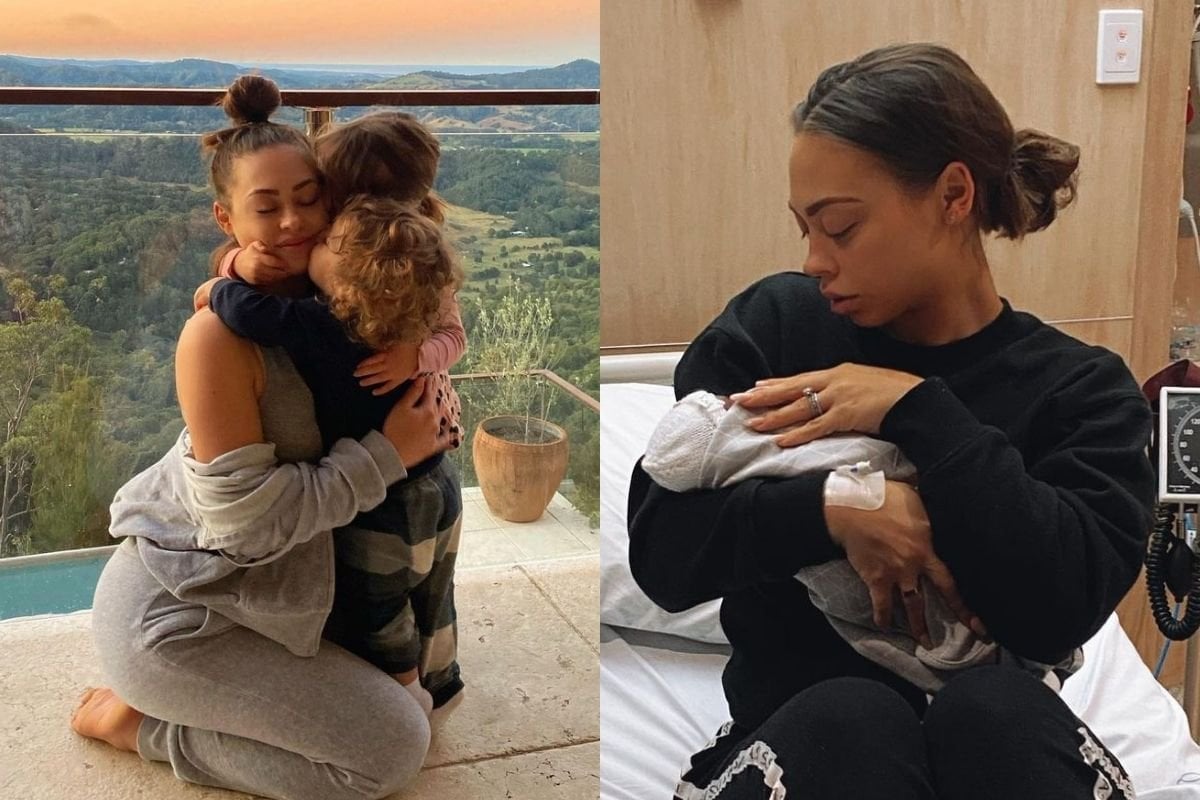 Emilee Hembrow's third pregnancy had been textbook perfect. With zero complications and all signs pointing to a healthy baby, the influencer and mother of two was eager to meet her newest arrival - a boy, who she had named Jamal.

"I had a really healthy, low-risk pregnancy. I've had two other pregnancies that were also really normal," Emilee told Mamamia.

However, at 29 weeks, baby Jamal was stillborn.

Watch: Bree and Evan talk about their stillborn son Archie. Post continues below.

Sharing the heartbreaking news with her 1.1 million followers on Instagram, the sister of fellow influencer Tammy Hembrow posted a drawing of a crying mother with an angel - striking a chord with mothers going through the same thing.

Recalling what she remembers about that day, Emilee describes it as a hollowing and emotionally draining experience - like her soul had left her body.

"It was like an out-of-body experience. It was really numbing because it was just such a tremendous amount of pain. I removed myself from my body so I could just get through it," said explains. "It was a big shock. I just didn't think there was a possibility this could happen."

As a mother to two other young children, Aaliyah and Gabriel, Emilee said it was important for her and her husband to share the news with their children in the most positive way possible.

"My husband was amazing and he kind of talked it through with our two children. Gabriel is quite small, but Aaliyah understands everything. So, my husband explained to her that baby Jamal has gone to heaven."

"At the funeral he had balloons for her to let go up into the air to symbolise this. We explained to her that Jamal is her guardian angel who is always watching over her, and I think the balloons really helped her."

"She now always talks about Jamal being her angel and him looking over us. I think it's important that we shared it in a positive and happy light, instead of putting sadness onto the kids."

On leaning on her family for support.

Since sharing her experience, Emilee said she had been overwhelmed by the support, not only from her family and friends, but the wider community - especially other women who had also lost a child.

"I have a really good family and have had such great support from the community. On social media there were so many people reaching out - it was just amazing the support we had."

"I think that everyone deals with grief differently and I wanted to spend more time with my children and husband dealing with my grief - I wanted them around me 24/7."

"My sisters, my friends, my husband's siblings and parents were all incredibly supportive. We had people cooking every day, cleaning every day - there was honestly just such a great amount of support."

Like many of us, Emilee had no idea just how common it is for families to experience stillbirth.

The fact is that there is still such a deafening silence surrounding pregnancy loss, making stillbirth a very dark and isolating place, that is often shrouded in unnecessary shame and secrecy.

"I think there's definitely a culture of silence around stillbirth and pregnancy loss because often people are too afraid to discuss it," said Hembrow.

"The reality is that six babies are stillborn every day in Australia so it's really common. I wanted to share my story because I feel like the support was something that really helped me grief whereas if I didn't share it, I feel like it could have been really isolating."

Emilee said that sharing her experience on social media and having the support of resources like Still Six Lives, which helps raise awareness around pregnancy loss, helped her grieve.

"It was really therapeutic for me knowing that I was connecting with other women that had gone through the same thing, and helping them know that they're not alone."

"Opening up the conversation around pregnancy loss also helps reduce the risk. If people know the statistics and that it's still happening people will speak about it."

According to the Royal Women's Hospital in Melbourne, A quarter of stillbirths that occur cannot be explained, and half of these happen when the mother is close to full term.

"There's three main things that I learnt from Still Six Lives in reducing the risk of stillbirth. Quitting smoking and avoiding secondhand smoke, monitoring baby's movements and also sleeping on your side after 28 weeks. Obviously not all stillbirths are preventable, but to have this discussion and just know these three things, can help reduce the risk."

"I'm dealing with the Stillbirth Foundation Australia and SANDS - that focus on pregnancy loss. I think it's just really important for women who have experienced this to they know they're not alone and they know there are resources out there to go through this difficult time. It's been a healing process just speaking about it."

On her important connection with her baby.

Emilee said giving her baby a name and building a connection between him and his older siblings is something that was a crucial part of healing and closure.

"Obviously for everybody it's different, but for me I embrace what I knew of him and the moments that I had with him. I know a lot of people do the opposite, but I definitely feel like it helped me heal. I didn't want to close that memory and that chapter and delete it from my life - I just wanted to keep it."

"This is forever a part of me and [will] forever be a part of my life, so I feel like I wanted to continue his legacy."

"Giving him a name, speaking to the kids and having that connection is something that's going to be forever in our lives," she said. "I feel like you don't get closure or you don't grieve as well if you're not doing it that way - but everyone is different, and this is just what worked for us."

The 29-year-old said while she was at first hesitant to hold her baby after giving birth, it's something she will always cherish.

"Hold your baby. That's something I really didn't want to do in that moment - I just wanted to kind of have a C-section, be put to sleep and to kind of erase everything from my mind."

"Even thought it's so difficult - I think it's important to just let yourself feel those emotions and go through the experience. Feel it. Grieve. Take the support from your family. And try to not shut out that whole experience. I feel like if you don't properly grieve and feel it, it will come back in the future."

"So many women and families are going through it, you're not alone. It's not something that should be hidden. Speak about it, share it with your friends and family. Go to the resources online and spread awareness because you can help others. Take the positive from the negative."