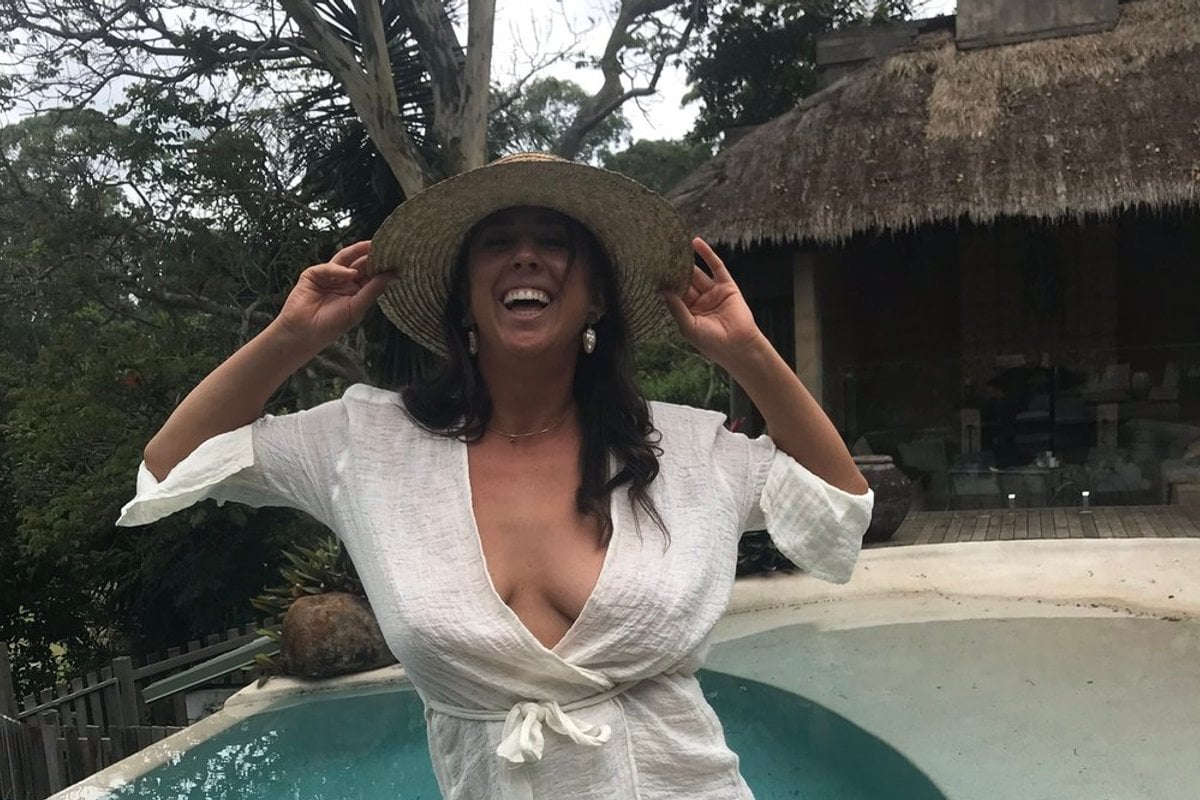 The first time Ellie Sedgwick became insecure about her vulva was when she was in high school. The boy sitting behind her tapped her on the shoulder and handed her a note. The note read: Do you have an innie or an outie?

"That was the first time I realised that mine was maybe different," Ellie tells No Filter host Mia Freedman. "It was the start of my insecurities."

The now 32-year-old, who grew up on the Northern Beaches of NSW, says the beach culture of her childhood and teen years meant that she was possibly more aware of her vulva than other people her age.

"My friend [who had labiaplasty] actually showed her mum and said, 'Why do I look like this?' And her mum said, 'Oh, I did as well. And I don't want you to go through what I did,' feeling like it was not sexy or blah, blah, blah, and she took her and gave her permission [to get the labiaplasty].

"My friend doesn't regret it at all. She's happy with her labiaplasty. But we always laugh and say, 'Imagine if we had all spoken with each other about it'."

Listen to Mia Freedman's full interview with Ellie Sedgwick on the No Filter podcast below. Story continues after audio.

"For me, it was not seeing other vulvas. And then the ones that I did, in Playboy or anything, had been edited and photoshopped. I'm very bisexual, I've never been straight, and so the few girls that I was sleeping with when I was starting to explore had that kind of designer vagina, as they call it. A Barbie vulva."

A "Barbie vulva" was pretty much the description of the first vulva Ellie ever saw - that of her best friend Ella.

"I remember thinking, 'Why does mine not look like hers?' That's what I remember thinking. And then hers looks like a Barbie doll that I'd always played with when I was younger. And I was like, 'Oh my gosh, I've got too much skin down there'. So yeah, let's say that's where a lot of insecurity sat," she says.

"One of the first guys to see my vulva... his brother messaged me, saying that his brother said that my vagina looked like a truck had run over it. And it's definitely... I was really young. I lost my virginity quite young. It was devastating. I just remember sitting there being so insecure. I held on to that comment forever, for sure."

Ellie didn't tell anyone, aside from her sister Nikki, how self-conscious she was about her genitalia.

"The problem is that the vulva is such a taboo topic," she says. "And then I went travelling around when I was in my early 20s around Europe, and I came back. And I remember sitting in the park with Nikki, and I was crying because I'd just slept with someone... I was really upset. I used to do this thing where I would honestly cry with people when I was sleeping with them. It's so sad for the person I was sleeping with because they'd be like, what's wrong with this girl.

"I was just so self-conscious of my vulva. Nikki said to me, 'There's this thing called labiaplasty. And I think you should get it because it's been so long now of you being worried about this part of your body'. And so that's when like my road led down to cosmetic surgeons in Sydney. And it's so concerning. They don't even look at your body. They were just like, 'When can we book you in?'"

A post shared by Comfortable In My Skin (ellie) (@comfortableinmyskin_)

Ellie decided to go to India to get the surgery done because she used to babysit in India on and off for six years and knew the country and culture well.

"I couldn't talk properly [to the doctor]. I called it a liposuction and kept pointing down there," she says, laughing. "So then I ended up in this horrible situation with a cosmetic surgeon in India, who was with a yellow highlighter drawing on my legs because he thought I wanted my legs to have liposuction.

"I was very awkward. I said, 'I mean, like here, not my legs at all'. And so that's when like this hilarious moment happened that I speak about all the time. He went and got a mirror, and he brought it over to my face and made me put my teeth forward and showed me that for the same price as labiaplasty, I could have my jaw line fixed with a chin extension.

"And he was like, 'Everybody sees your face and only people you love see your vulva'... I went in with one insecurity and came out with two."

Yet, the interaction with the doctor did make her think again about why she wanted a labiaplasty. "He said to me, 'Have you seen other vulvas? Because yours is... you know, I don't think you need this surgery'. And I think it's very lucky I was in India. He sort of talked me out of it."

Taking the doctor's advice, Ellie started looking at vulvas. Lots and lots of vulvas. She began photographing women's genitalia and started the movement Comfortable In My Skin, a venture about embracing the body you have.

"A lot of my girlfriends remember me talking about how cool would a book [full of pictures of vulvas] be, and this was years before I started. But they didn't know about my insecurities. And then when I actually did this Facebook post in 2018, saying I'm going to create a coffee-table book and it's going to be called 'Flip through my flaps', and I'm going to photograph 500 vulvas... they were like, 'I remember you talking about this'," she says.

"People went 'Yeah, that would be really cool. I'd love to see what other ones look like'. But then you also had the jokes that were quite nasty."

A post shared by Comfortable In My Skin (ellie) (@comfortableinmyskin_)

After photographing so many vulvas over the years, Ellie is particularly aware of the terminology around female genitalia. Many people still mistake vaginas for vulvas.

"It took me about three years to start saying 'vulva' and then now I cannot not pick up on it. I'm so in tune with it. As soon as someone says 'vagina', it just tingles me. I'm like, it's vulva. And it makes me angry because there's such a big lack of education."

For clarity, Ellie explains that the vagina is the canal inside you and vulva is everything on the outside.

"So many people are using the wrong terms, having no idea. And that's because we're not educated on our bodies, that part of our body. We just missed out on that. There's so much information on penises and everything else, just not vulvas," she says.

"It's a body part. When I started Comfortable In My Skin, my dad said, 'Talk about it like it's a body part because that's what it is'. And when you make things weird and nickname-y, then it makes it feels like you're being naughty talking about it when actually it's just a beautiful part of our bodies, like our breasts. It's something that we should treasure and love and feel connected to. So we should be allowed to talk about it in the right way."

Watch: How well do you know your 'Lady Garden'? Story continues after video.

Ellie uses a lot of humour when talking about vulvas, which can sometimes land her in trouble.

"I have actually made jokes on my social media about calling them 'flaps' and gotten messages from people that I photographed, being like, 'I don't find this funny and if I'm a part of your work, trying to change the narrative of how we joke about vulvas, then I don't want my photos in it if you're going to do that'. Social media is a very tough world. A lot of opinions," she admits.

"I took the post down and I apologised. I mean, I photographed this person and she was so open to me and I said, 'If this personally offended you, I will take it down immediately'. But I do push boundaries a little bit, I think, because I find humour helps. I think you can say funny things as long as you just talk about it. I talk about all taboo topics, and I drop a bit of humour in so that it's comfortable for everyone."

Nowadays, labiaplasty is the last thing on Ellie's mind.

"I am a living example that you can change the way you feel without changing it under the knife."

For more No Filter with Mia Freedman, go to mamamia.com.au/podcasts/no-filter/.

For see Ellie's work on Comfortable In My Skin, go to comfortableinmyskin.com.au/.