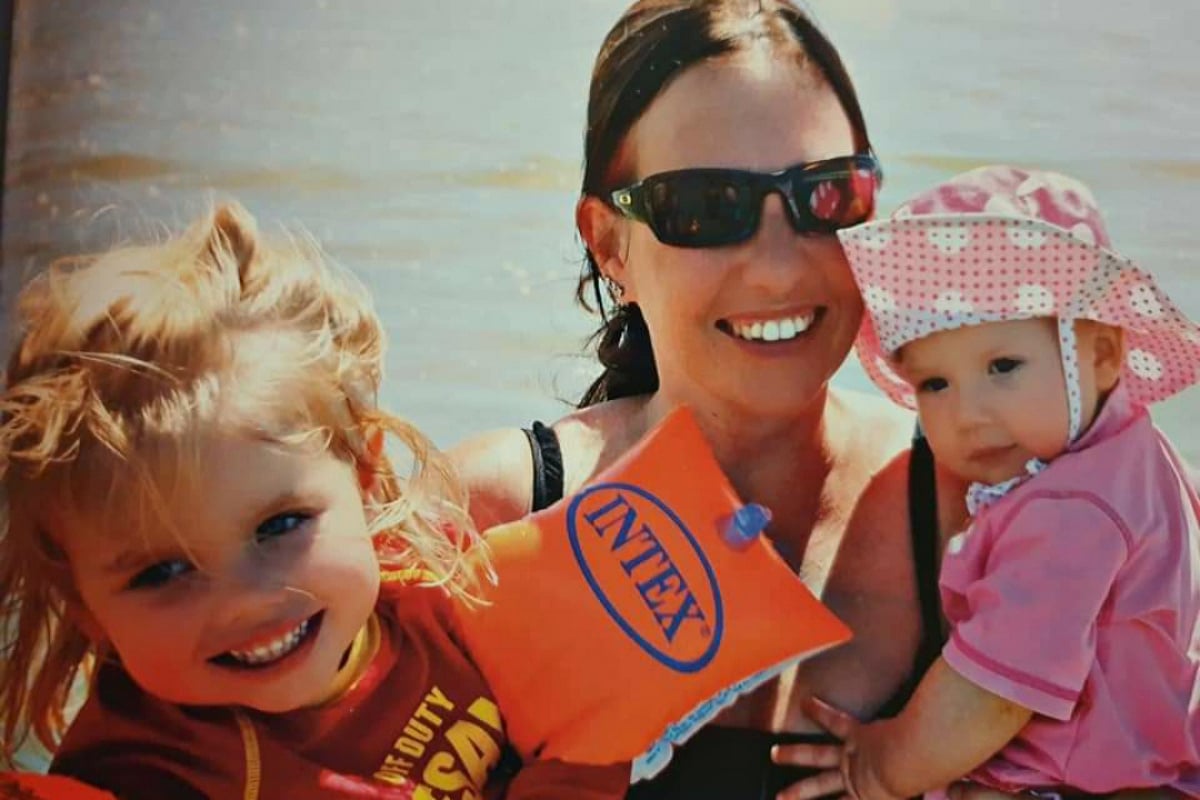 It was seven days before Christmas, 2015. The Underhill family's tree stood tall within their Casino home in NSW's Northern Rivers.

Elle, 4, tore around the house singing carols and pleading to open a present. Her two-year-old sister Elaina, ever her shadow, followed right behind, declaring that Santa was going to bring them a unicorn.

That joy, that anticipation of the holiday, was stolen from the Underhills that December afternoon.

Elle was killed and Elaina critically injured in a crash just kilometres from their home.

The sisters' 18-year-old babysitter had been driving them along the nearby Bruxner Highway when she lost control of her Mazda 323 and collided with an oncoming car.﻿

She and her husband, Steve, were at home having lunch at the time, and the sound sailed over their fence. One siren. And another. And another.

The former primary school teacher checked the local community Facebook page for information. There'd been a crash and possible fatality. One car had been ripped in half. There was a description of that car: a red Mazda 323.﻿

"I looked at my husband and I dropped my fork," Michelle told Mamamia. "I said, 'Get in the car. Something's happened.' On the way, I called the [babysitter]'s mother. She was crying and didn't say anything. So I knew, at that point in time, that it was the girls."

"I jumped out of the car and was running toward the scene when a young fella drove past me and he said, 'Are you the mum?'" Michelle recalled. "He said, 'I'm so sorry. I tried everything I could.'"

Michelle describes the scene in senses. The booming sound of helicopter rotors. The broken glass under her feet as she ran toward the wreckage. Her husband's blood-curdling scream. The smell of petrol on her daughters' hair.

To this day, she still struggles bring herself to fill her own tank. The smell is too much.

"How many people are going to have to die?"

August is Rural Road Safety Month, an initiative of the Australian Road Safety Foundation that aims to raise awareness about the unique dangers of driving on country roads.

"In rural areas, people can become complacent, because it's a road that they've travelled a thousand times," Michelle said. "But we have wildlife, we have high speed limits, and we have roads that are in a different condition to city roads.

"We have all these other factors that — if people become vague, if there's inattention or a distraction — can contribute to a crash."

Yet a recent survey by the ARSF found that one in five drivers confess to being more likely to break a road rule in rural areas.

1 in 5 Australian drivers confess to being more likely to break the law on rural roads compared to city streets & highways. #ChooseRoadSafety pic.twitter.com/g4UxwLjT75

The statistics show the outcome of that recklessness.

Despite rural Australians making up just 16.5 per cent of the population, they account for two-thirds of the national road toll.

There was a time on the day of Elle's death that Michelle thought Elaina, too, had become part of that toll.

Amid the chaotic aftermath on December 18, 2015, there was confusion about the girls' identities. Their parents were told it was their youngest that hadn't survived.

So when Michelle saw that it was her beautiful Elle laying lifeless at Lismore Base Hospital, she feared she'd lost them both.

Elaina had been flown by helicopter 200km to Brisbane Children's Hospital (formerly Lady Cilento Children's Hospital), resuscitated along the way. She was on life support and had suffered injuries to her brain and bladder, a blown pupil, deep laceration on her arm, extensive cuts and bruising, and more.

"She was a mess. The only reason I knew it was truly her was because Elle had painted glitter toenail polish on her the night before," Michelle said. "That's the only way I could recognise her."

"I half expected her to say, 'Mum' or 'Dad'. But her first words were, 'Take me to Elle. I have to go back to Elle.' It was gut-wrenching," Michelle said. "We'd been advised to tell her the truth straight away, so I just said, 'I can't. She's gone. She's dead.' It pretty much annihilated her whole world, her whole being. And it broke my heart, that's for sure."

Elaina, now 7, still bears 21 visible scars from that day. Just as plain to see is how much she misses her big sister.

She recently did a Father's Day project that asked what she'd buy her dad if she had a million dollars. Elaina's answer: "A time machine, so we could go back in time to see Elle again." 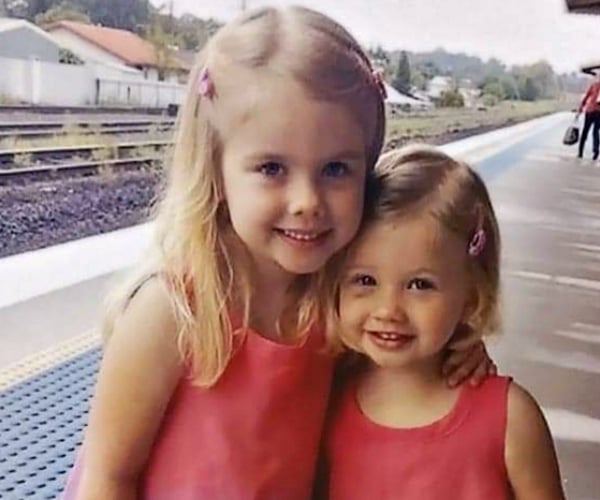 "Elaina often writes little notes to Elle and sticks them around the place, and she'll sit and read a book next to Elle's ashes at home," Michelle said. "She tries to include her in pretty much everything that she does."

Watching their little girl grow is painfully bittersweet. She recently lost a tooth; a little milestone that Elle never lived to reach.

"We are super proud of Elaina, and we will celebrate every success that she has," Michelle said. "We hope that, one day, she gets a licence, she graduates, she gets married and has all those achievements. But we'll forever know that we should have had it twice... And that Elle should be there beside her."

"You have a responsibility..."

The driver of the car — the girls' babysitter — was last year convicted of negligent driving and sentenced to community service and a $1,500 fine. The court process dragged on for three years, complicating Michelle's grieving.

As a family, they talk about Elle often, have her picture around the house, her room as she left it. But their pain has not lessened in the nearly five years since; it just feels a little easier to live with some days.

"Elle's death is not a limited event for us — it's not limited to that day. It continues, it unfolds, day by day," Michelle said.

"Any parent that has suffered the death of a child knows that the entire world changes, forever. Your house isn't as loud or as full of laughter, it has closed doors and family pictures that are emptier — there's a hole where Elle should be." 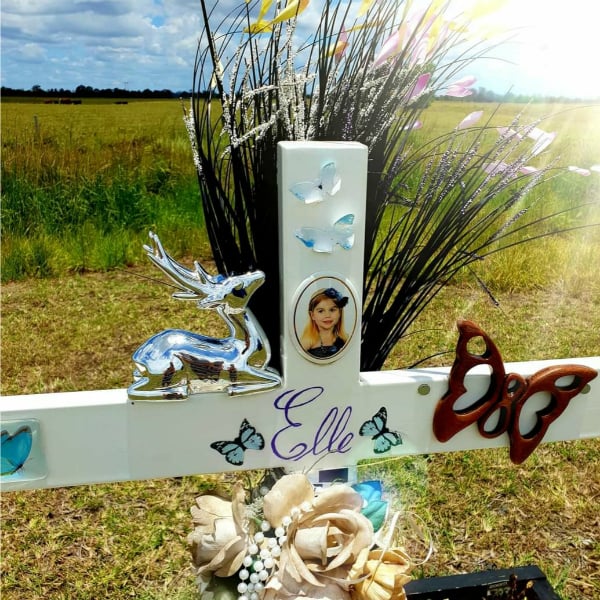 There are little triggers, too; seemingly innocuous events that jolt Michelle into the reality of her loss.

Seeing a family together at the local shopping centre. An ad for a holiday package that's meant for a family of four. Their family Medicare card reissued with her name and reference number erased — "now it just reads: 1, 2, 4."

The ongoing trauma, the lifelong, life-altering consequences of a single moment behind the wheel, are part of what Michelle wants drivers to understand.

She also encourages road users to fit a dashcam, which she argues can be vital in helping authorities piece together what happened in the event of an accident.

"I don't want another family to be sitting around suffering what we're suffering through," Michelle said.

"You have a responsibility to keep yourself safe, your occupants safe and other road users safe. I just I don't know what it's going to take for people to start listening; I don't know how many people are going to have to die.

"Elle is now a statistic, and she shouldn't be."

Reply
Upvote
The pathetic sentence handed to the driver no doubt  would compound their grief.  The parents were not aware of the fact that the babysitter took the girls on a 30km drive into town and the police found that she had rceived a text message 2 minutes before the crash, although the driver denies (of course) of using her phone.
C
cat 2 years ago

Reply
Upvote
2 upvotes
@guest2 the sentence was low because there’s no evidence she did anything wrong. She was under the speed limit, and the car lost traction around a bend because construction workers left loose gravel on it. And getting a message isn’t proof that you were using your phone. There’s no point trying to destroy her life over a tragic accident that could happen to anyone.
<
<deleted> 2 years ago

Reply
Upvote
2 upvotes
@cat  it was a straight stretch of road which can be seen in the photographs of the crash.  The driver in the other car (which collided with hers) said he saw her car drifting towards the middle of the road into his lane.   Any competent driver doing the speed limit would not lose control of their car, ending up with it being ripped apart, because of some loose gravel on the verge.   I can understand the parent's frustrstion with the verdict.
C
cat 2 years ago

Reply
Upvote
1 upvotes
@guest2 it was a straight stretch of road after a curve. And traction is a matter of physics, drivers don’t control that. Gravel, ice, water, oil- any car can lose traction due to any of these, and they cause 3% of all road accidents. That’s what the forensic reports found happened, and that’s what the court found- they tried to pursue higher charges but they couldn’t find any basis on which to do so. I totally get the parents emotion and frustration, but we don’t put people in jail to make other people feel better. Sometimes accidents are just horrible accidents.
Resources
Very Peri
Skin
News
General
Opinion
True Crime
Politics
Sport
Explainer
Entertainment
Celebrity
Reality TV
Movies
TV
Books
Rogue
Royal
Lifestyle
Beauty
Fashion
Weddings
Home
Wellness
Health
Fitness
Travel
Food
Family
Before The Bump
Pregnancy
Baby
Kids
Teens
School
Parent Opinion
Work & Money
Money
Finance
Career
Lady Startup