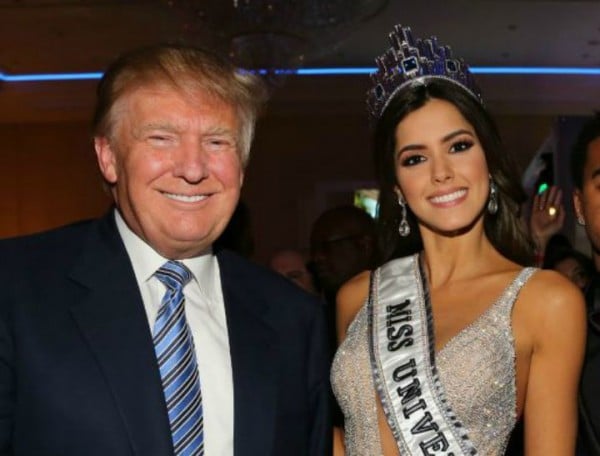 It’s so easy to laugh and shake your head at political correctness.  About the silliness of ‘Baa baa rainbow sheep’ and ‘chalkboard’ for ‘blackboard’ or ‘personal access units’ for ‘manholes’.

It’s also easy to laugh at Donald Trump with his rooster comb over, cock-eyed stare and frothing fury.

But both are smokescreens and concepts about as outdated as a blackboard in the age of interactive smartboards.

Trump, or ‘The Donald’ as he likes to be called, is a bully billionaire who wants to be President of the USA and leader of the ‘land of the free’.  But like many meglomaniacs with massive egos, he has a fragile sense of self and a glass jaw. He has recently shown he can dish out insults and vitriol – but he can’t take them.

At least not from women.

I'll summarise for those who (understandably) looked away at this latest episode:

Republican-friendly Fox news commentator Megyn Kelly got a bit tough with Donald because, well, you know, democracy. In a Republican candidate debate, she questioned him about calling women ‘fat pigs', ‘dogs', ‘slobs', and ‘disgusting animals'. Trump was initially amused at his own joke, saying “only Rosie O’Donnell" (good one, Don!).  But later (as a classic coward, he didn't say it to her face) he criticised Kelly, saying, "You could see there was blood coming out of her eyes, blood coming out of her wherever."

Watch the news report below. Post continues after video.

Donald Trump is now defending himself, saying it's sick to believe his comment meant he was talking about Kelly having her period. He meant blood coming out of her nose. Of course.

Understandably many, including Republican women's organisations, have reacted in horror. But Trump says her question about women and the reaction to his 'blood' comments show political correctness is out of control.  According to the Don, one of the biggest problems in his country is political correctness itself.

I'm no expert, Donald, but I would say the biggest problems in America are nothing to do with political correctness. They are more like spending billions on wars, having a failing education system, not regulating your banks and allowing kids to have guns. Note to Trump: political correctness doesn't kill people. Bullets do.

Let's break it down.  Being political means giving a shit. Donald, if you want to be president you may have to get political. Being correct. Well, you want to be correct, you would think.  Mind you, as a climate change denier perhaps this is not Trump's highest priority. Political correctness is therefore for him, perhaps, a meaningless term.

Implied in Donald Trump's fury at political correctness is that he is a rebel, an outsider, a radical free thinker. Sorry, does being a sexist pig make you are free thinking original? I don't think so. Making jokes about periods is hardly new ground. Many of us have been copping the 'that time of the month' joke for much of our lives. Younger women have had it less - perhaps a triumph of political correctness or at least evolution.

The fact is Donald Trump is the establishment.

Trump's argument about political correctness is about as mature as defending himself against sexism and racism with the excuse that he loves women because he's married three and he owns beauty pageants. Or that he's had a driver and a gardener who was a Mexican.

Trump is a brand who has become a caricature of itself. With an ego as large as his tower, and artifice as broad as one of his golf courses, he is a symbol of superficial, stupid, dumbed-down debate. He is a far greater threat than political correctness

But Trump's no idiot. By using political correctness as a shield, he's pretending to be on the side of those who are his complete opposite. The angry, the powerless, the confused, those who want the world to have simple solutions like building a fence to keep out the Mexicans. Trump is not an underdog being threatened by the power of political correctness. He's a vitriolic, righteous power-loving, celebrity rich guy who feels he's entitled to fool the underdog voters he attracts to become the ruler of the free world.

If Mr Trump is selling himself as a conservative, he should go back to the conservative value of being polite. It's not politically incorrect to be decent, to be respectful and kind. To seek power by refusing to divide people against each other. It's called being a leader.

If you still doubt me, let me leave you with my favourite Trump quote (this is a man who talks about himself in third person):

"Trump is a man who is certain about what he wants and sets out to get it, no holds barred. Women find his power almost as much of a turn-on as his money."

God Bless America if he becomes president. Because I fear the man thinks he's a god. Or at least God's gift to women.

‘BYOT’ and 4 other ways to stay relevant in the workplace.