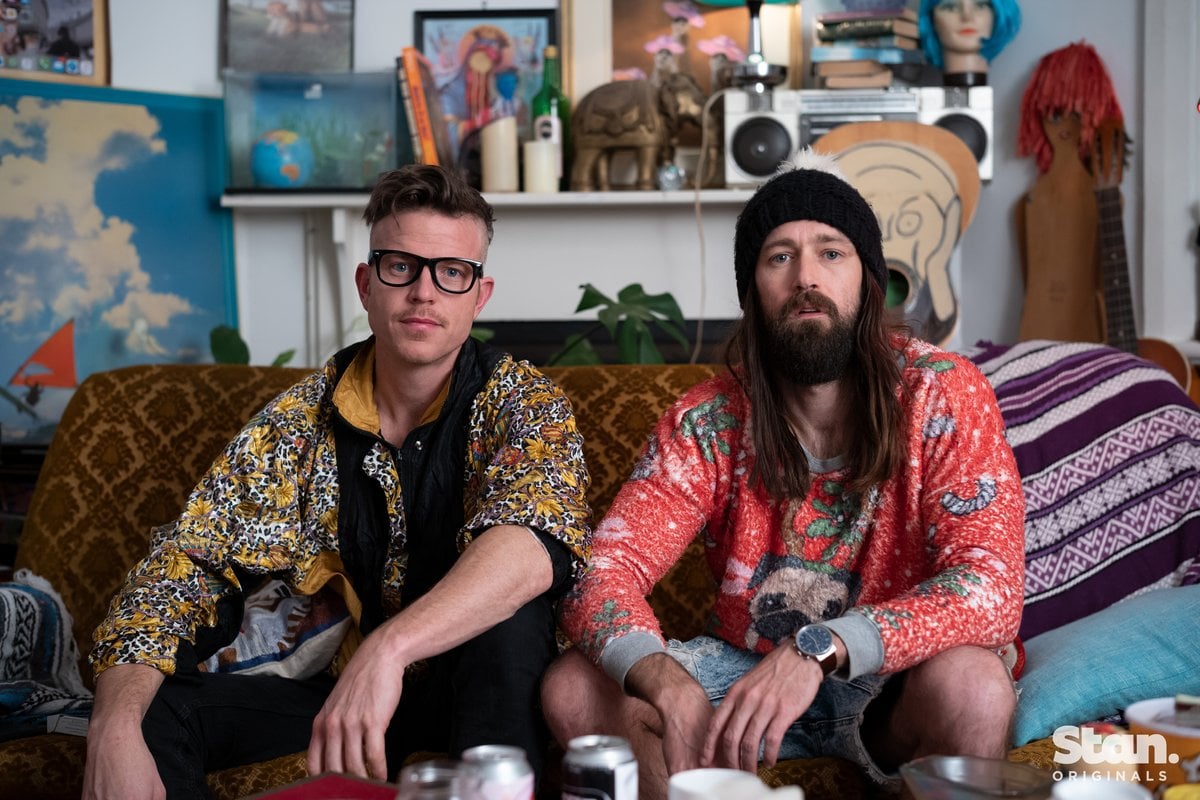 2020 has been tough for us all, but spare a thought for aspiring USBJ's Dom and Adrian, a.k.a The Bondi Hipsters.

They're had a really bad run.

You see, the musical duo (for the uninitiated, USBJ's are DJs who only use... USBs) were due to play at a bush doof when the bushfires hit. They were booked to play a bushfire fundraiser when the floods washed through.

They were going to headline a flood-relief show when the hail storms came down. And then, before their biggest gig yet, the whole country was thrown into lockdowns because of a global pandemic.

Watch: The Dom and Adrian: 2020 trailer. Post continues below video.

Thankfully, documentary maker Gerry had her cameras rolling for all of it, meaning all of this has been captured for a mockuseries docuseries on Stan.

Speaking to Mamamia ahead of the series release on December 13, Dom and Adrian explained that things turned south pretty early into 2020.

After a series of unfortunate cancellations, the biggest blow came when their gig for a panel beating fundraiser at the North Bondi RSL club was canned.

"You know. COVID came along. Apparently."

"What do you mean apparently, Dom?" Adrian chimes in.

"It's not 'apparently'. COVID is a VERY real thing that was the death of thousands and thousands of festivals and multi-media art-bukkake events the world over. Was a God damn tragedy." 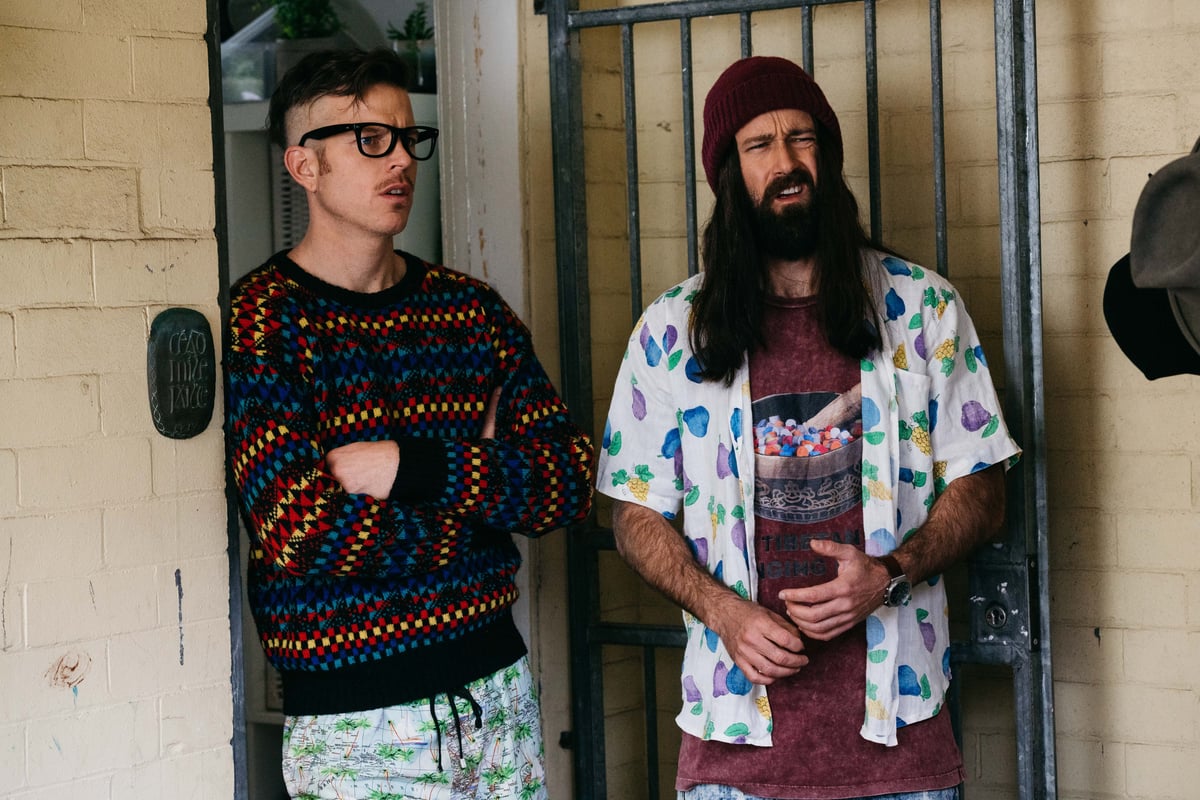 Like many of us, the pair were plunged into lockdown and a life full of COVID restrictions.

"Personally, I found myself getting more grounded. Finding ways to reconnect with what's important," Adrian reflects.

"I learned to make my own biltong, bake my own bread and cook my own cakes using my own yeast from behind my ears. I think that was the best thing to come out of lockdown was realising that I'd wasted so much of my life getting really good at things that would be completely pointless during an apocalypse. And also finding time to focus on myself. Self-improvement."

"I love how people who focus on themselves, or look inwardly, or engage in self-improvement act like they are doing something good for the world," Dom responds.

"It's literally the most selfish thing you can do. How can one be more self-centred than by working on themselves? Give me a break." 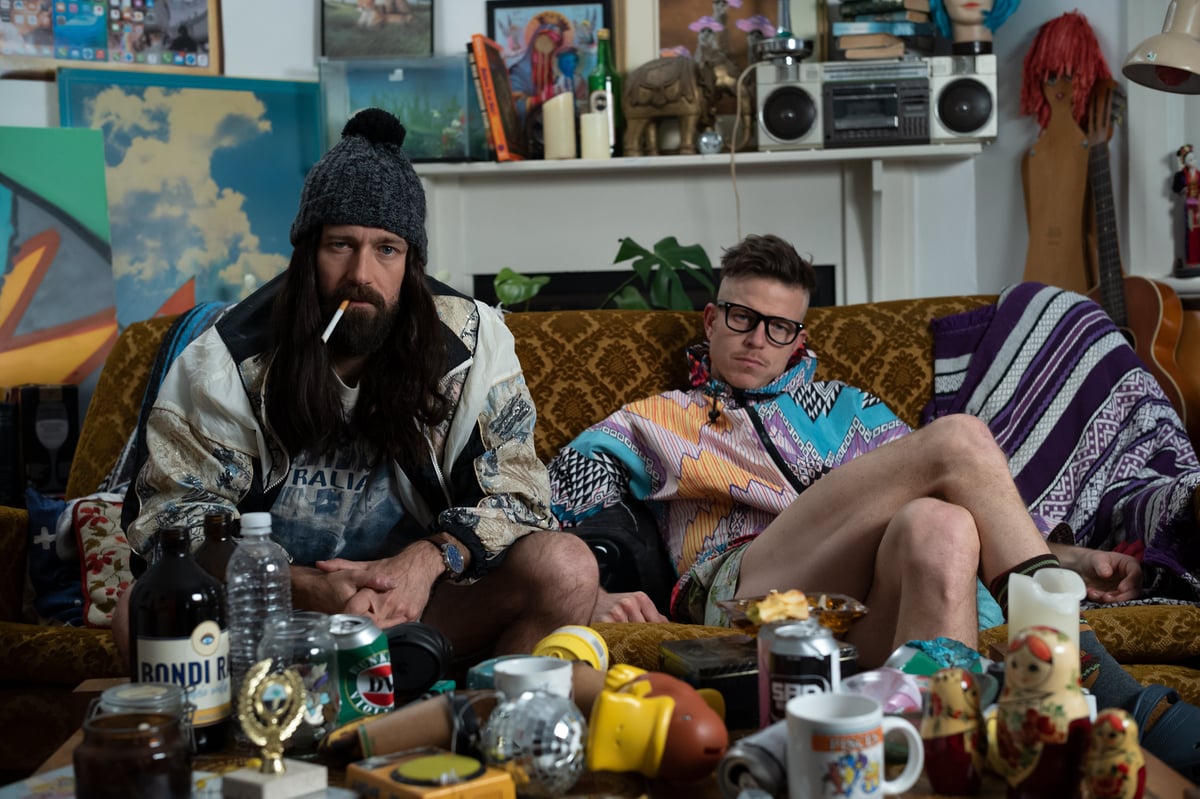 Okay, okay. So what has life in lockdown been like for you, Dom?

"I guess my eyes were finally opened to the hardship faced by people on Centrelink," he says.

"I used to think that was lazy. But f*** me dead, filling out JobSeeker forms was harder than any job I've ever had in my life! Are you serious? I had to renew my driver's license. And to do that I had to get a new passport.

"Then after all that I had to work out whether or not I was a robot, and then click on all the squares with train tracks in them... That was f***ed. Then getting denied for being in the arts, and constantly fighting with my real estate agent over rent-freezes. Then getting evicted, having to move out into a bin, getting collected by garbo's, dumped at the tip, then waking up on that big floating garbage island in the middle of the Pacific Ocean. 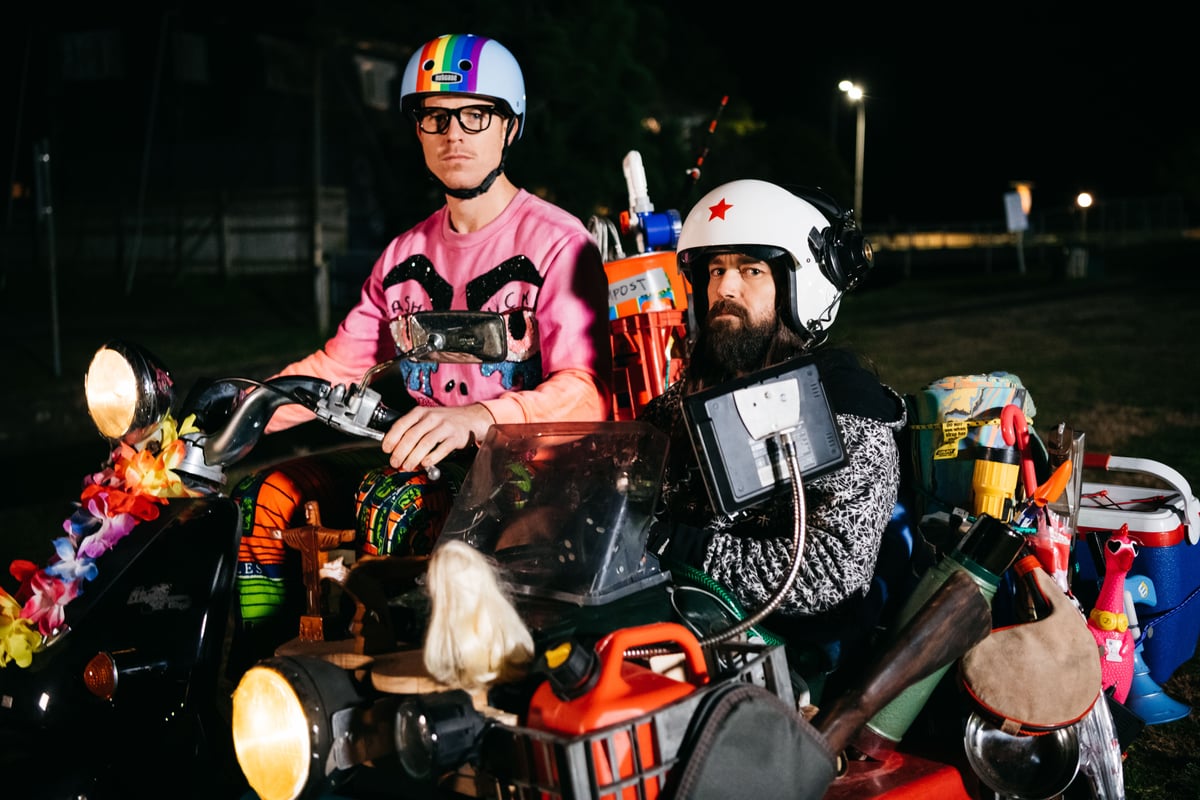 It sounds like this took a bit of a toll. I wonder if the friendship held up okay under such strain...

"Yeah... I'm also looking for a new flatmate, so if you know anyone..." Adrian agrees.

The pair then argue about money, and paying rent on time, and rich parents. Yikes - let's focus on something else, like how their careers would've panned out over the year if it weren't for... absolutely everything.

Dom thinks they'd be "killing it", but as Adrian points out, they actually still are.

With 2020 almost done and dusted, Dom and Adrian see themselves making big moves in 2021.

"[I see us in] maybe Bondi – who knows – this place is losing its edge. Haven't seen a junkie here in years," Adrian says.