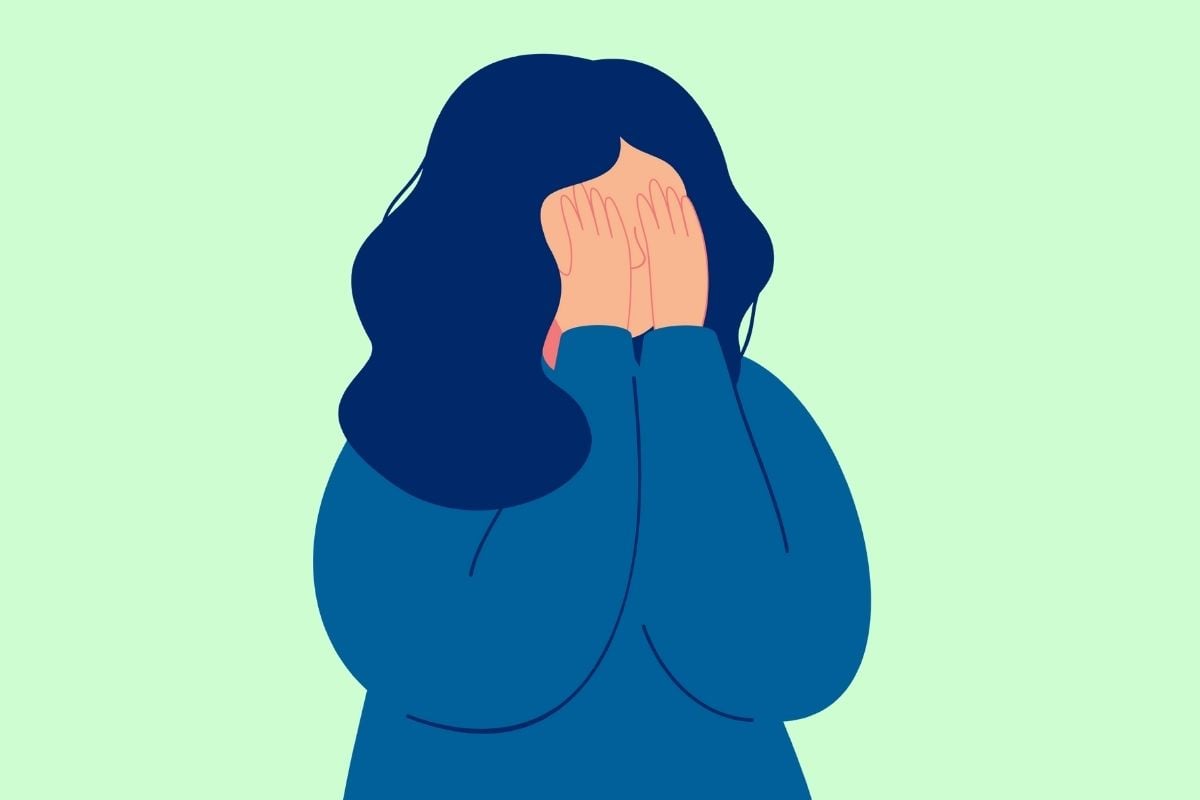 Think of the worst, most embarrassing thing that's ever happened to you. Are you picturing it? It's... bloody uncomfortable to look back on, isn't it?

It might be that time your date completely ghosted you. When you had to do a work presentation, choked up, and had to sit down. That time your skirt rolled up underneath your bag and you flashed a whole bus full of people...

Shame is a universal experience that comes in different scenarios - and we all experience it in some shape or form.

And she's up there with some of the most unpleasant of feels. Painful, in fact. Like, sometimes it's uncomfortable enough to make you feel like you could actually just... disappear.

Watch: How do you tell the difference between feeling sad and being clinically depressed? We asked an expert to give us the lowdown. Post continues below.

What you might not know about shame, however, is that there are some common situations where we're more likely to feel bad about ourselves - and each can affect us in different ways.

To find out more, we speak to psychotherapist Lissy Abrahams and look at everything we never knew we needed to know about shame.

Abrahams explains it like this: "Shame is a universal emotion we feel when we violate social norms. At such moments we feel humiliated, exposed, and small and are unable to look another person straight in the eye."

"We can feel sick to our stomach, red in the face, and we typically want to hide from everyone."

While it's a common emotion that everyone will feel, Abrahams describes it as "an underground emotion" that's "different from other emotions that we can talk about."

"When we feel or reflect on our behaviour that causes us shame, we can become consumed with believing we - as a person - are bad," explains Abrahams.

If you're wondering if this is just the same as guilt - same. But apparently, they're actually two very separate emotions.

While they may seem closely linked, Abrahams said that when we feel guilt, it's our behaviour that is usually deemed as 'bad', whereas with shame, we don’t absorb the 'badness' into our sense of self, as we do with guilt.

Shame goes to a deeper level of the psyche, where there's a more painful awareness of the self. While shame can be felt in many situations, Abrahams said there is something at the core of shame that is always present - a fear of disconnection.

"Leading shame expert Brene Brown hits the nail perfectly on the head in her definition that 'shame is the intensely painful feeling or experience of believing that we are flawed and therefore unworthy of love and belonging.'"

"Her research shows that humans are hard-wired in every way for connection, love and belonging."

While the feeling of shame can be brief and fleeting, it can also be an enduring emotion that can make you feel like you are fundamentally flawed and not 'good enough'.

"Shame can exist wherever we believe we’re flawed, fearing people who are important to us will see us as not up to scratch, and then flick us away," said Abrahams.

"Humans are social animals, as are many mammals. As social animals, we work hard to keep within the bounds of the various communities we belong. We need the feeling of inclusion."

"There’s a reason we do this. We want others to see us in a desirable way and our ego helps us create and curate the image of ourselves that we wish to portray."

"When we behave in a way that’s out of the social norm, it will tap into our primitive fear that others will find out we’re not good enough, or unworthy, or unlovable – and any of these translate to being abandonable. And in our primitive DNA we know that being abandoned by our herd is deadly – just as it is for mammals in the wild."

Meaning? We have to stay on top of our game in order to protect ourselves.

"We even have our ego telling us to behave in certain ways to protect our identity in public. It works hard to prevent us from being cancelled. Shame is why cancel culture is so powerful.

"We can brutally judge someone who mis-stepped too far for our liking as unworthy, cut them down and then ostracise them. We become judge and jury, and feel blemish-free and pure in our self-image, implying 'we’d never behave so poorly'. Social media has fuelled this exponentially."

What are some of the most common types of shame?

According to psychotherapist Joseph Burgo, author of Shame: Free Yourself, Find Joy and Build True Self Esteem, there are four common types of sham, which he refers to as "shame paradigms".

Abrahams describes one-sided love as one of the most fundamentally shameful experiences, "such as a mother who doesn’t love their child, and the child feels inadequate and lacking."

"I see this in couple relationships where partners experience the shame of their partner’s diminishing emotional and sexual connection to them."

Think of that time you weren't invited to THAT party. Or when you were left out of the 'group chat' on WhatsApp or messenger.

"We need to belong to our community or herd as humans have needed to belong to keep alive. It’s primitively wired in our mind and body that we are safer within a group and have more protection in numbers," explains Abrahams.

"Humans on their own in the wild are extremely vulnerable to predators, just like many other mammals. Exclusion is wired into our DNA to symbolise vulnerability and death."

"This shame happens when we feel we’ve stepped out of our norm in public, fearing judgement. My client Rachel had a relationship with a married man at work. They were caught up in what they felt was the loveliness of their affair until they weren’t – his wife found out."

"Months later, she feels shame about her involvement in this relationship and can’t reconcile how she 'as an essentially good person' could end up in an affair. She’s mortified by her actions, worries about what her colleagues think of her, and her mind is consumed daily with thoughts about it."

This type of shame is all about falling short of expectations - whether it's romantically or professionally.

"My client Jerome has a partner who constantly compares him unfavourably to her ex-boyfriend, and he feels diminished and useless," shares Abrahams.

"Gerald wants the world to swallow him up when his partner shakes a finger, deeming him a 'disappointment and embarrassment'," she adds.

"Can you see that in all of these examples, shame is the fear of being perceived as unworthy and abandonable? It’s a primitive fear that there is something’s not right about us and others will see it. We can all have these feelings."

How to learn from shame.

The good news? These are healthy emotions that everyone has - so don't feel like it's just you. For some reason, though - we just don't talk about it, making it really hard for people to deal with.

"We want to hide from it more than any other emotion. It hates being spoken about. We don’t want others to know about this part of us, as we fear their harsh judgments of us as inadequate and unworthy," said Abrahams.

"When we feel shame, we can go to great lengths to avoid people, self-isolate and disconnect from others."

"We also find techniques to disconnect from ourselves, such as finding distractions, or even constructing ego-based stories to try to bolster our fragile ego – such as finding someone to blame, making harsh judgments of others, or minimising our role or responsibility. It’s awful for us to feel we are somehow 'bad' to the core."

Instead of just not dealing with it, Abrahams said when we're feeling shame, we need to do the opposite of what shame wants us to do.

When shame is overwhelming, there are three key things you need to do in order to help yourself learn and move forward.

First off, you need to talk about it and get it out into the open. "We need to expose shame by talking about it with someone who is empathic and understanding. This provides relief," said Abrahams.

"Shame survives alone and in secret. When we do the opposite, it cannot survive. Don’t plaster it on social media but make sure it’s a safe place to talk about it. Many people talk about their shame in therapy."

"As shame happens between people – the best thing we can do is heal it with people. Self-compassion is key because when we’re able to be gentle with ourselves in the midst of shame, we are more likely to reach out, connect, and experience empathy."

3. Gather the learning from the experience.

"If you messed up – decide to do it differently next time. Ask yourself what you learnt from the experience? Has it made you less judgemental and harsh? Can you now see more complexity in life? Do you re-evaluate relationships? Do you understand your history more?"

"There’s always something to learn as we navigate life’s emotional journeys – find the lessons from shame and keep them throughout life."

If you would like to read more from Lissy, check out her e-book on how our ego can impact our relationships.

Can you relate to any of the above situations? Share your thoughts in the comment section below.