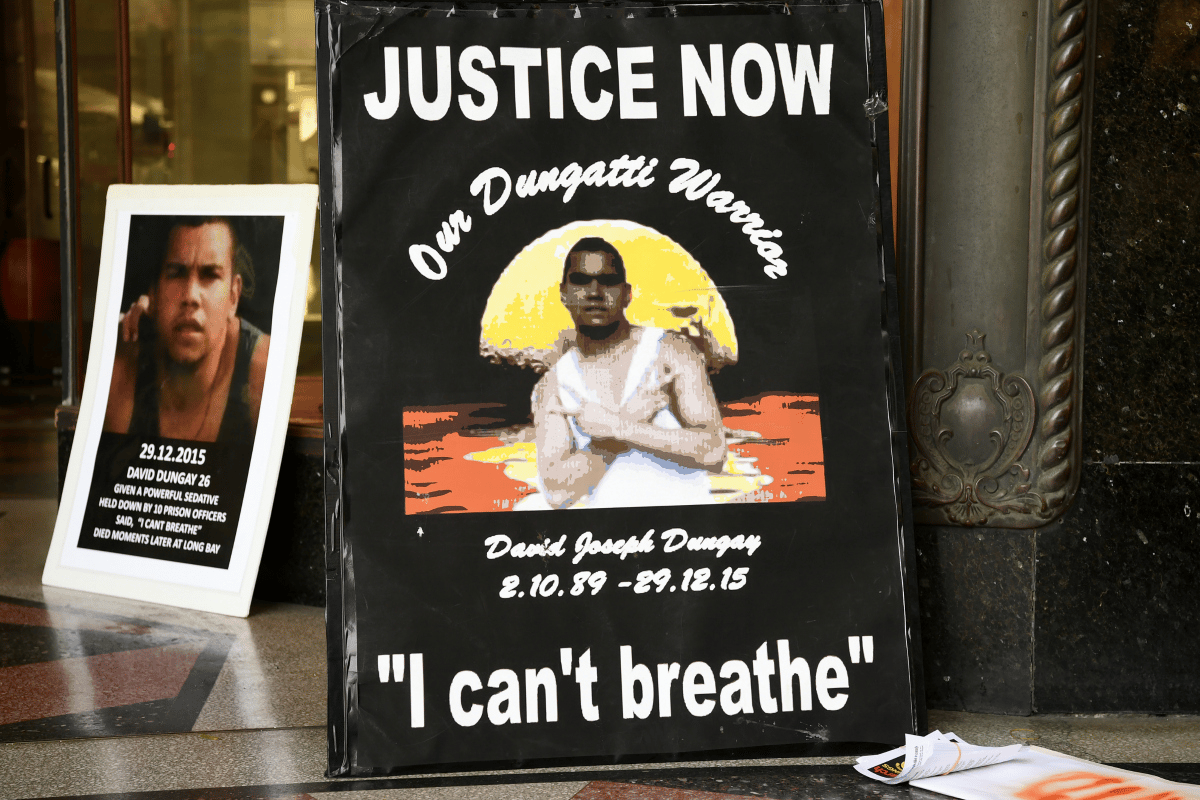 Warning: The article contains an image and the name of an Indigenous person who has died.

Those three words are echoing across the world this week. They're emblazoned across headlines, social media posts, and cardboard signs, as people join the conversation about the May 25 death of Minneapolis man George Floyd.

As captured in the viral phone footage taken by a bystander, the desperate plea was among the last words the African American man uttered as he lay facedown, dying, with the knee of a white police officer pressing firmly on his neck.

Six years ago, those three words were also among the last uttered by black man Eric Garner after New York City police officers placed him in a fatal chokehold.

With these deaths — and plenty more like them — "I can't breathe" has become a catch-cry of the Black Lives Matter movement in the United States, an evocative symbol of the systematic racism that underpins heavy-handed police tactics across the country.

But for the family of Indigenous Australian, David Dungay, the phrase also hits painfully close to home.

David, a 26-year-old Dunghutti man from Kempsey in NSW, died in custody in 2015 after being restrained, sedated and pinned down by five prison guards.

"When I saw the video of George Floyd [dying], I had to stop the footage. It took me straight back to when I first saw the video of my uncle’s death," David's nephew, Paul Silva, wrote in an online post.

"Both men had multiple officers restraining them, pushing them into the ground and ignoring their cries for help, until they took their last breath."

David was just weeks shy of being released on parole when he died at Long Bay Correctional Facility on December 29, 2015.

David lived with schizophrenia and was confined to the mental health ward of the prison hospital at the time.

According to the report, David, who lived with diabetes, became agitated after a correctional officer warned him not to eat a packet of biscuits. (David lived with insulin-dependent diabetes and had returned high blood sugar readings earlier in the day.)

The decision was made to move him to a camera-monitored cell for observation. During the transfer process, which was filmed in line with prison policy, David became increasingly agitated and was pinned down, restrained and medically sedated by a nurse.

Facedown, with the weight of five Correctional Services officers upon him, he cried out, "I can't breathe". It was a phrase he repeated over and over.

Within a matter of minutes, he was unresponsive.

Prison staff and then ambulance paramedics performed CPR, but it was too late. David Dungay was pronounced dead.

Listen: In the wake of George Floyd's death, The Quicky looks at Australia's own shameful record of deaths in custody.

In 2019, NSW Deputy Coroner Derek Lee determined that David died of cardiac arrhythmia, and that "the use of force and restraint" by the officers was among the factors that contributed to his death.

However, Lee rejected a submission from David's family that the officers involved be referred for disciplinary proceedings. He concluded that their actions were a result of "deficiencies in training" and a "misunderstanding of information that was conveyed at the time" rather malicious intent.

No charges have been laid over the incident.

David is just one of 432 Aboriginal or Torres Strait Islander people to have died in police custody since 1991, when a Royal Commission into the issue was finalised.

The Dungay family has vowed to continue their campaign to have someone held accountable for David's death.

"The inquest might be over, but our fight for justice is not," Paul Silva wrote.

"We have had many people, both First Nations and non-Indigenous people standing with us. We can build on that – we need many more to join us.

"We can take inspiration from the United States and get back out on the streets in our own backyard, where there is so much brutality against Black people, too; that’s the only way to get justice."