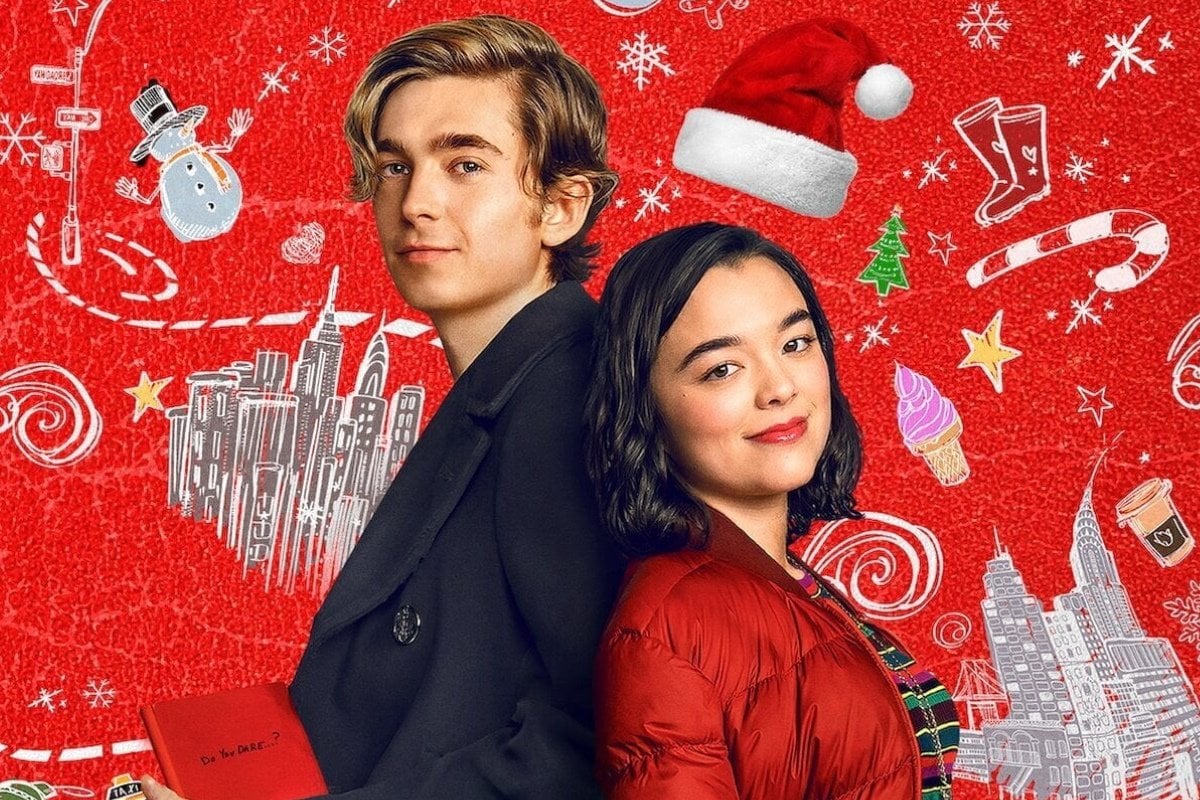 Occasionally a TV show comes along and warms the cockles of my cold, dead heart.

In 2020, that show is Netflix's new Christmas-themed teenage rom-com, Dash & Lily, which is based on Rachel Cohn and David Levithan’s 2010 novel Dash and Lily’s Book of Dares. It's bloody cute and can best be described as Home Alone meets You've Got Mail for teenagers.

The eight-episode series stars Austin Abrams and Midori Francis as New York teenagers Dash and Lily, who are both spending the holiday period without their parents.

WATCH: The trailer for Netflix's Dash & Lily. Post continues below.

Lily, a loner who has never been kissed, spends her days reading books and hanging out with her charismatic, gay brother Langston (Troy Iwata). Langston is determined to bring her out of her depression before Christmas, which is usually her favourite time of the year.

Dash, who hates Christmas, is still reeling from his recent breakup with his ex-girlfriend Sofia.

With Langston's encouragement, Lily leaves a red notebook containing a bunch of literary clues on a shelf in the Salinger section of her favourite bookstore, The Strand.

The pair continue to communicate through the red notebook, sharing their dreams, visiting each other's favourite places, and challenging each other to complete a series of dares.

And, of course, they fall in love before they actually meet in real life.

When they do finally meet in person, it doesn't quite go to plan.

Older viewers will be reminded of classic New York-based rom-coms like You've Got Mail and Serendipity, while the younger audience (who the series is actually aimed at) will get some serious To All The Boys I've Loved Before vibes.

Here's what people are saying about Dash and Lily:

Dash & Lily is cute af on Netflix what the heck. 🥺

Did I just binge all of #DashAndLily? Yes. Yes, I did.

I just binged Dash and Lily and I'm now in love with him?? pic.twitter.com/xfazrNTWku

Oh my god, Dash & Lily is amazing! The casting is perfect, and I love the chemistry between Dash and Lily so much! Also yes for diversity! There's Black, Latino, Jewish, Asian and queer representation. The book is perfect, but so is this series. I need season 2 now! #DashAndLily pic.twitter.com/23MGVfRAjC

So clear your weekend, Dash & Lily is exactly the kind of feel-good, wholesome binge we all need after the garbage fire that is 2020.

You can watch the entire first season of Dash & Lily on Netflix now.