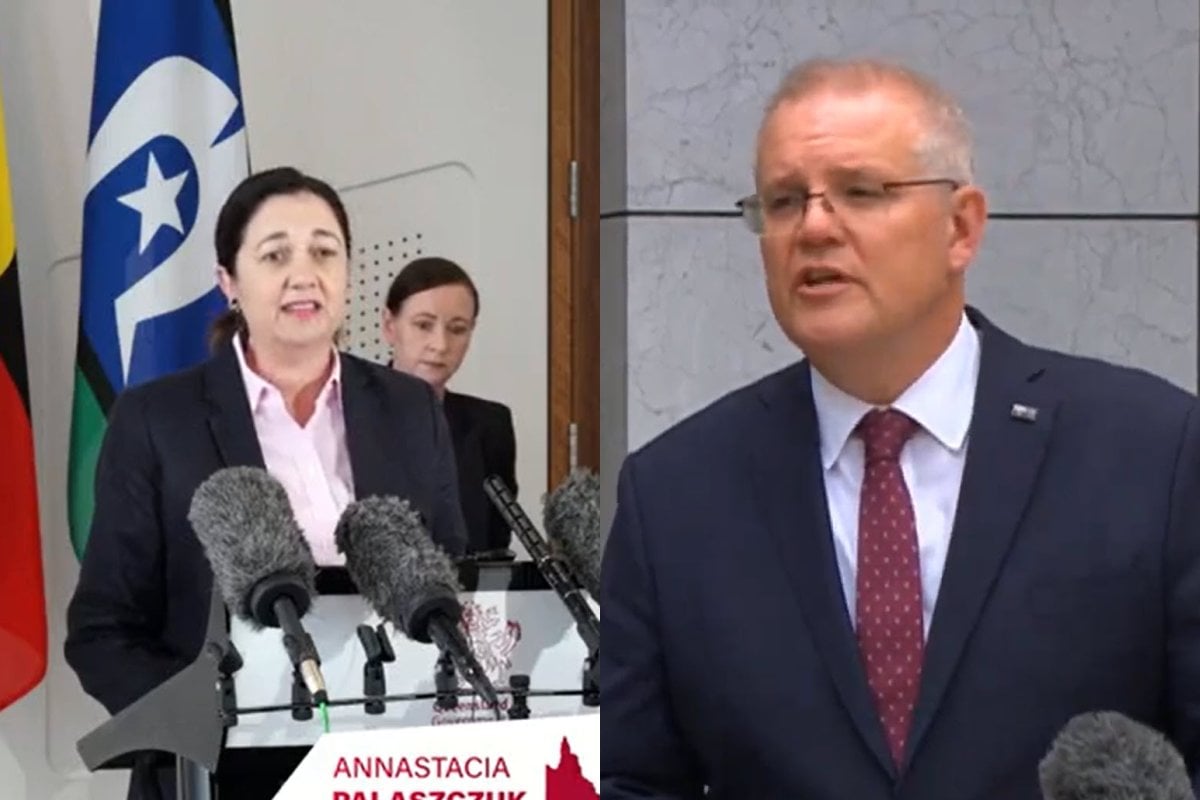 Speaking from Canberra on Thursday, Morrison said vaccination of high priority groups will begin in "mid to late February", earlier than the March timeline previously laid out by his government.

Among the first to be vaccinated will be healthcare workers, quarantine and border workers and aged-care staff and residents.

Morrison said the plan is to have 80,000 people receive the Pfizer vaccination a week, with the goal of having four million people vaccinated by the end of March.

The Therapeutic Goods Administration is expected to grant approval to the Pfizer shot later this month, with other vaccine approvals to follow.

A Brisbane quarantine hotel worker has tested positive for coronavirus.

The worker is a woman who worked at the Grand Chancellor hotel in Brisbane and her infectious period started on January 2, Queensland's Chief Health Officer Jeannette Young said.

"This is in addition to our regular testing with out cleaning staff in hotel quarantine," she said.

"This cleaner did everything right."

Queenslanders are urged to get tested if they have any symptoms.

The state's second new case is a child who travelled from the UK and is in hotel quarantine.

Wednesday had marked 113 days without community transmission in Queensland.

New South Wales and Victoria have both recorded no new locally-acquired coronavirus cases on Thursday, however one person in NSW has been diagnosed in the hours since the state's 8pm cutoff.

Acting Premier John Barilaro said the new local case, which will be included in Friday's numbers, is connected to the Avalon cluster.

This case is a man who resides in the northern zone of the Northern Beaches.

NSW recorded no new locally acquired cases of COVID-19 in the 24 hours to 8pm last night.

Six cases were recorded in returned travellers, bringing the total number of COVID-19 cases in NSW since the beginning of the pandemic to 4,795. pic.twitter.com/jfgLIgnQ6P

More than 27,000 tests were conducted on Wednesday, and six new cases have been detected in hotel quarantine.

Meanwhile, Victoria recorded a 'donut day' on Thursday with no new locally acquired coronavirus cases, as well as none in hotel quarantine, from a total of 32,767 tests.

However, tens of thousands of cricket fans and Boxing Day shoppers are being asked to get tested and self-isolate, following the state's first mystery case in more than two months.

Premier Daniel Andrews said on Thursday genomic testing has linked this mystery case to the outbreak on Sydney's Northern Beaches, but it is still unclear how the man in his 30s acquired coronavirus.

There were 0 cases notified to the department in the past 24 hours. This includes 0 locally acquired and 0 in hotel quarantine. 32,767 test results were received. Thanks - #EveryTestHelps. More later: https://t.co/2vKbgKHFvv #COVID19VicData pic.twitter.com/nB69ayAC4Z

Health authorities are scrambling to find the source, with the man catching the virus after attending the sales at Chadstone Shopping Centre on December 26 and the Boxing Day Test at the MCG the following day.

The news of possible transmission at the MCG has also sharpened anxieties over Sydney's cricket test, beginning today.

Those who go to the SCG need to wear a mask at all times except when eating and drinking, Health Minister Brad Hazzard said on Wednesday.

Sydney Murugan Temple was visited by a confirmed case on New Years' Day between 12.30pm and 1.30pm.

Among the new alerts are also Nostalgia Factor Shop in Kangaroo Valley and Taj Indian Restaurant in Huskisson, on NSW's south coast.

A paramedic, a nurse and a third person are all in hotel quarantine in Perth after coming into contact with a COVID-19 patient who recently returned from the United Kingdom.

The woman, in her 80s, arrived from the UK on January 2 already showing symptoms of the virus and subsequently tested positive.

Genomic testing is underway but it is not yet known if she has the more virulent strain which has caused havoc in Britain.

The woman was initially placed in hotel quarantine, but her condition required a transfer to the Royal Perth Hospital on Tuesday where she is now considered stable.

The second breach occurred when a St John Ambulance officer not wearing PPE was less than 1.5 metres from the woman as she was transferred into an ambulance.

A review of CCTV footage at Perth Airport subsequently found a third person had also gone to the aid of the woman when she first arrived.

That person has returned a negative test for the virus so far and remains in isolation.

Dr Lawrence said the low numbers of COVID-19 in WA were no excuse for complacency and breaches could lead to community transmission.

The woman's case came after WA officials confirmed earlier this week that three people who also spent time in hotel quarantine in Perth had subsequently been found to have had the more transmissible UK COVID-19 strain.

They have since recovered and been released from isolation.

NSW, Victoria and South Australia had all previously recorded cases of the UK variant in returned overseas travellers.

It is believed to be up to 70 per cent more infectious, causing a sharp rise in cases in England and prompting British Prime Minister Boris Johnson to order a new national lockdown until at least mid-February.

In light of the current circumstances, Premier Mark McGowan said he would support a ban on Australians returning from the UK if that was recommended by health officials and proposed by the federal government.

New COVID-19 infections have hit record high daily levels in Japan, Malaysia, the UAE, Norway and Portugal as coronavirus-related deaths spiked in the UK and hospitalisations hit a new peak in the US.

More than 86.3 million people have been reported to be infected by the coronavirus globally and 1,867,781 have died, according to a Reuters tally.

Japan's COVID-19 cases reached a new daily record on Wednesday as the government faced mounting pressure from health experts to impose a strict state of emergency for the Tokyo greater metropolitan area.

New infections in Japan reached at least 6001, a new daily record according to a tally by broadcaster NHK, and Tokyo reported 1591 cases, also an all-time high.

Malaysia's Health Ministry reported 2593 new cases of the virus on Wednesday, the highest such number reported on any day so far since the start of the pandemic.

The United Arab Emirates also broke its daily record of infections with 2067 cases.

Norway had 930 new cases of COVID-19 on Tuesday, the highest daily number on record, according to data from the Norwegian Institute of Public Health.

The daily number of cases in Portugal, a country of just over 10 million people, reached a record high of 10,027 on Wednesday, as officials prepare to approve an extension of a state of emergency to fight a worrying increase in infections.

The UK recorded more than 1000 COVID-19 daily deaths for the first time since April as the government struggles to deal with a new, more infectious variant of the coronavirus.

The country recorded 1041 deaths within 28 days of a positive test for the virus on Wednesday and a further 62,322 new COVID-19 cases, according to official data.

UK Prime Minister Boris Johnson has told MPs that England's recent strict lockdown could last until the end of March in some places.

In the US, more people were hospitalised with the virus than at any time since the pandemic began, as infections and deaths soared across much of the country.

US COVID-19 hospitalisations reached a record 130,834 late on Tuesday, according to a Reuters tally of public health data, while 3684 reported fatalities was the second-highest single-day death toll of the pandemic.

With total COVID-19 cases in the US expected to surpass the 21 million mark on Wednesday, pressure mounted on state and local officials to speed up distribution of the two authorised vaccines from Pfizer-BioNTech and Moderna.