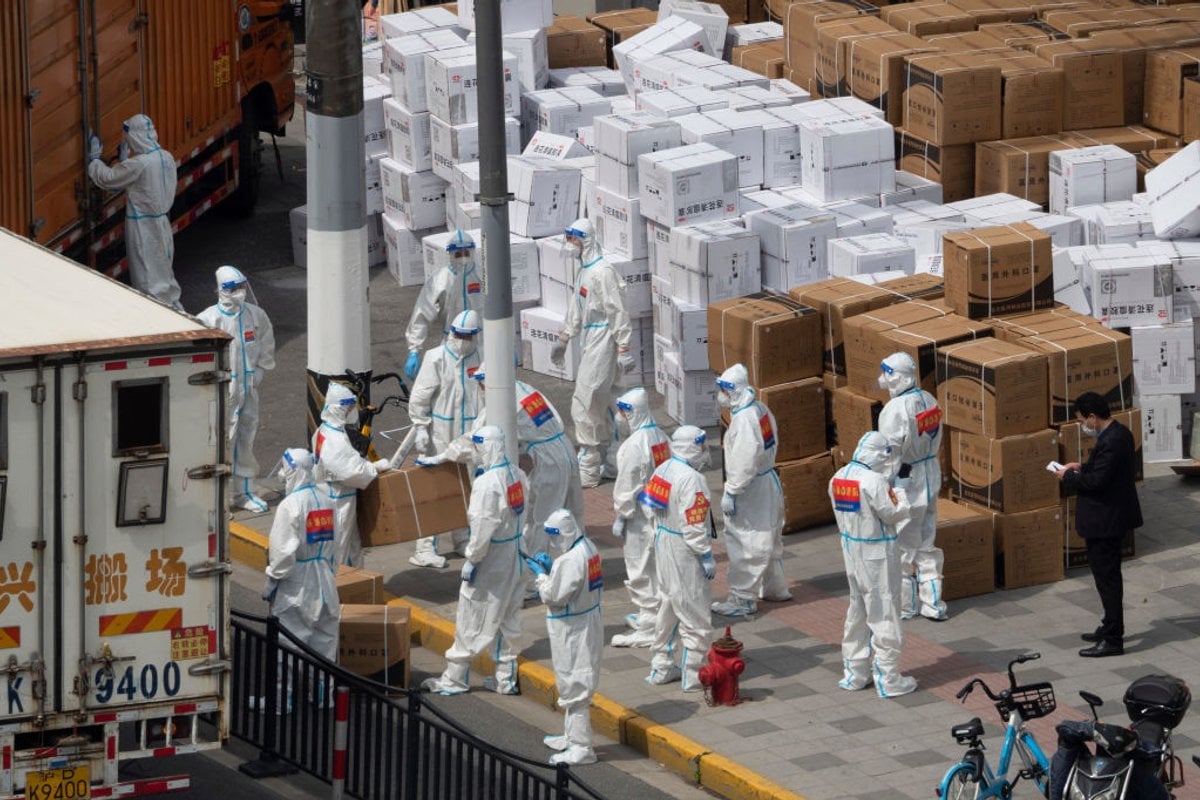 With lockdowns seemingly behind us, it can be a jolt to the system to realise that there are still countries where wide-scale lockdowns are a part of everyday life.

Yet of course, each country has been and is dealing with the pandemic in their own way.

You might have seen some rumblings in your social media feed or caught a headline or two about what is going in Shanghai. Here's a breakdown of what is happening.

What's going on in Shanghai?

Shanghai is China's largest city and its global financial hub. With a population of almost 30 million, it is the most populous urban area in the country and one of the biggest cities in the world.

And now, the whole of Shanghai is in lockdown with over 220,000 positive COVID cases.

This is the first city-wide lockdown it has faced since the start of the pandemic. Previously, to deal with outbreaks, there were smaller localised lockdowns where several hundred residents were confined to their homes.

The reason that Shanghai has not enforced a full-scale lockdown before is likely due to its economic importance. According to the BBC, Shanghai has contributed over three per cent of China's GDP and makes up over 10 per cent of China's total trade since 2018, while its airports are responsible for bringing in nearly half of the protective equipment and medicine needed during the pandemic.

Lockdowns happen. So why are the residents screaming?

In essence, government officials failed to take into account food distribution. With residents under strict orders to stay indoors, with supermarkets and grocery stores closed, the only way people can get food is to have it delivered.

But with many delivery drivers and grocery workers in isolation or in lockdown themselves, there has been tremendous demand and very little supply.

At most risk has been the elderly, who do not know how to properly use the online delivery system, and foreigners who don't speak the language.

According to the Sydney Morning Herald, neighbours are banding together in an effort to get food. They have pooled together large amounts of money to place very large orders, filling up truckloads.

In addition to food shortages, children and parents have been separated from each other if one or the other has been found to have COVID.

According to the ABC, many elderly patients have died in hospital due to lack of care and staffing issues.

Pets have been confiscated and killed. The footage on social media of animals being seized and put to death are too awful to show here.

Beggars have been stomped on and beaten.

Ambulances have driven away from the sick.

In desperation, many residents have been screaming from their windows and balconies.

What the?? This video taken yesterday in Shanghai, China, by the father of a close friend of mine. She verified its authenticity: People screaming out of their windows after a week of total lockdown, no leaving your apartment for any reason. pic.twitter.com/iHGOO8D8Cz

Shanghai's 25 million people under lockdown indefinitely. Chinese social media shows some breaking out of lockdown to protest, chanting: "we want freedom"; "why are you starving us?"
Much of the dissent is censored. Most of videos in our story were erased from the internet @cnn pic.twitter.com/QUHrfqEhiG

Day 22 of my Shanghai Covid lockdown

As we feared yesterday, we have new restrictions

Before we were allowed to leave our building (but not community) to get deliveries - no more; now we are not allowed out of our apartment door

Authorities now say they will ease restrictions after another mass test in China's most populous city.pic.twitter.com/3VlV970kUo

We can't turn a blind eye to what's happening right now in China. We have a special guest from Shanghai coming on the show tomorrow to talk about the despotic Chinese regime, but we can't share his identity, or he might end up like this person... or worse.pic.twitter.com/WUnRaGx33S

#China #shanghai A human tragedy under the closed city of Shanghai The indifference of hospitals and doctors when faced with dying patients seeking advice pic.twitter.com/I3UbasqmC0

In #Shanghai, Covid workers brutalized an old couple, their daughter (in black coat) trying to beg them to stop beating was also knocked down & groaned in agony. pic.twitter.com/mQGDk2NbBB

When will the lockdown end?

There are signs the lockdown in Shanghai has started to ease over the last day or two. Some residents in "lower risk" areas of infection have been let out of their homes, but they are reportedly unsure where they're allowed to go to.

At this point in time, all we can do is raise awareness of what is happening in Shanghai in the hopes that their suffering will ease with increased scrutiny from people - and governments - around the world.

Why aren’t more people talking about what’s happening in Shanghai?

A
arishma.s a month ago

Reply
Upvote
This is very sad and inhumane. Keen to understand what various governments are doing as a response? I mean we are quick to respond to countries that have oil and are in “distress”…
C
cat a month ago