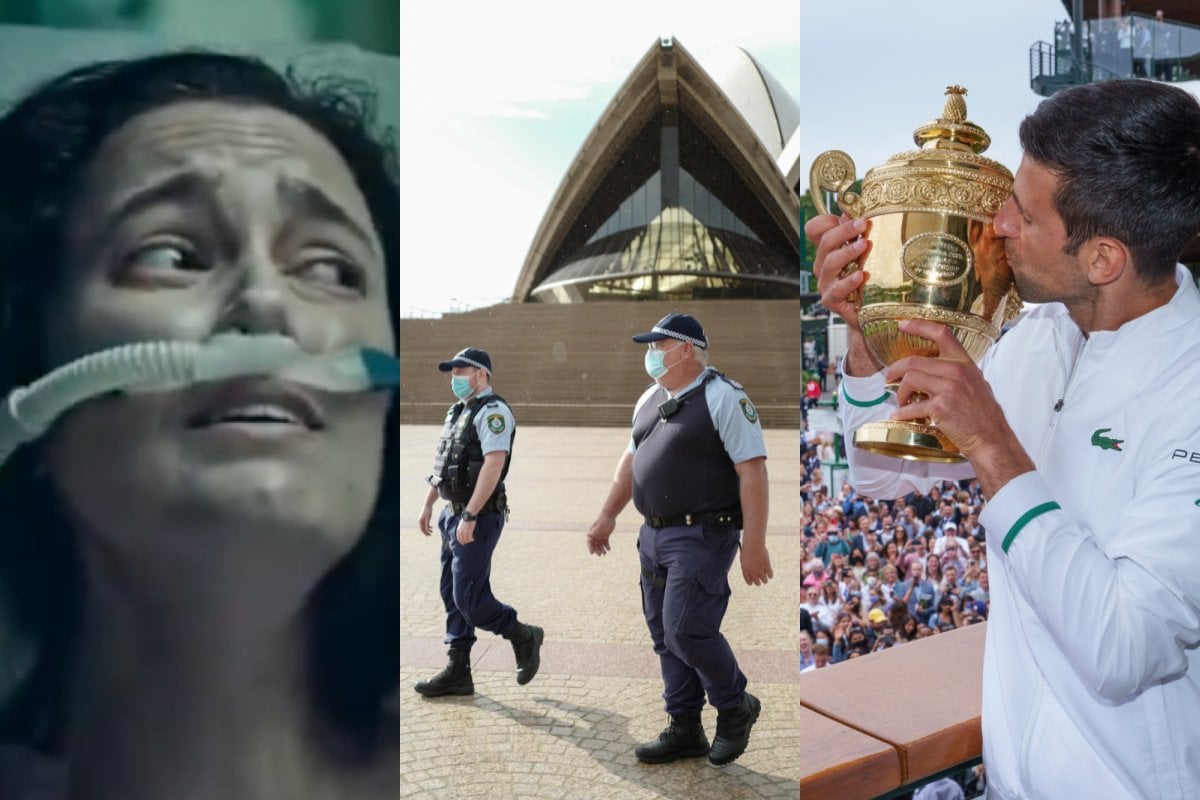 Premier Gladys Berejiklian has issued a grim prediction that daily COVID-19 cases will hit 100 as NSW recorded its first COVID-19 death of 2021.

A 90-year-old southwest Sydney woman died on Saturday, hours after being diagnosed as COVID-positive.

She was a close contact of a locally acquired case and was believed to be unvaccinated.

Sadly, a woman in her 90s from south west Sydney died yesterday at Liverpool Hospital. She was a close contact of a locally acquired case and was tested for COVID-19 on Friday, returning a positive result early yesterday morning.

Her death is the first since the Bondi cluster emerged on June 16, and the first connected to COVID-19 in NSW since a man died in December.

It came as NSW recorded its highest daily total of infections of the current outbreak, with 77 new local COVID-19 cases in the 24 hours to 8pm on Saturday.

Of the 77 new cases, only 32 were in isolation for all of their infectious period.

The premier expects the daily record will not last long, anticipating more than 100 new local cases will be announced on Monday.

The majority of Sydney's cases are still being detected in the south-west; of the 77 cases reported in the past 24 hours, 52 of them come from south-western suburbs. #9Today @vella_lara pic.twitter.com/uCOx6tq6Rw

There are 15 COVID-19 patients in NSW in intensive care, with five on ventilators. Berejiklian has all but confirmed lockdown in Greater Sydney and surrounds - scheduled to end Friday - will be extended.

NSW Police handed out 100 infringement notices on Saturday alone, including 30 related to three large gatherings; one involving 15 middle-aged and elderly men playing cards in a Marrickville home, another five men playing video games together in Merrylands West and a third involving 10 people gathered at a Sydney Olympic Park unit for an 18th birthday party.

A "graphic" COVID-19 advertisement will air on Sydney television screens to highlight the seriousness of the disease.

In the short commonwealth-funded TV ad, a young woman on a ventilator struggles to breathe in a hospital bed as her heart monitor beeps.

She slowly makes eye contact with the camera and gasps for air as a message reads: "COVID-19 can affect anyone. Stay home. Get tested. Book your vaccination."

Chief Medical Officer Paul Kelly said the Australian government had specifically commissioned the ad because of the intensifying outbreak in NSW.

"We are only doing this because of the situation in Sydney and it will be running in Sydney," he told reporters in Canberra.

Vaccine task force leader Lieutenant General John Frewen said it would only run in Sydney, while the "Arm Yourself" campaign would be aired nationwide.

The less-confronting ad shows a series of bare arms with band-aids stuck on to signify they have had the jab.

"We were the best in the world in the campaign against AIDS, we've done drink-driving very well," he told ABC's Insiders program on Sunday.

"But after 18 months if this is the best they can do, they need to go back to the drawing board."

Victoria has effectively shut its border to the entirety of NSW and the ACT over concerns COVID-19 could leak out of Sydney.

The state's acting chief health officer has declared NSW and the ACT will become red zones under Victoria's travel permit system from 11.59pm on Sunday.

Previously both regional NSW and the ACT were listed as orange zones, allowing people from those areas to enter Victoria if they got tested and isolated until they returned a negative result.

The Acting Chief Health Officer has declared that all of New South Wales and the Australian Capital Territory will become a red zone under Victoria’s travel permit system at 11:59pm Sunday 11 July. See full statement: https://t.co/fDt1mkHQcX

But they will soon be lumped in the same category as Sydneysiders and those in surrounding areas, hot on the heels of NSW recording 77 new local cases on Sunday.

"Victorian public health authorities are concerned about the risks of transmission beyond current red zones in Greater Sydney and surrounds, and the potential risks this poses to the Victorian community from people entering our state," the health department said.

After Sunday night's deadline passes, Victorian residents will still be able to return from red zones but must isolate at home for 14 days.

Queensland is rolling out the red carpet to tourists from COVID-19-free states and territories in a bid to breathe life into its ailing tourism sector.

The Sunshine State has $380 million worth of major events planned for the second half of 2021, including a cycling festival, an outback golf tournament, and the TV WEEK Logie Awards.

They're expected to inject millions of dollars into local businesses and support jobs as they draw visitors around the state.

Almost $20 billion has been wiped from Queensland’s once booming tourism industry due to the pandemic.https://t.co/b5FQvu4dBS

"We're encouraging Aussies particularly from Victoria, South Australia and Western Australia to book holidays in Queensland and support our tourism businesses that have done it tough throughout the pandemic," she said on Sunday.

Tourism Minister Stirling Hinchliffe said the closure of Australia's international border during the pandemic had blown a $6 billion hole in the state's visitor economy.

The 'Live! In Queensland' campaign is expected to return 76 per cent more to the visitor economy in the second half of 2021 than the $215 million it did in the first six months of the year.

The extra vouchers requested by tourism operators will be released in Southeast Queensland, with 10,000 more vouchers available on the Gold Coast and 19,000 more in Brisbane, each valued at $100.

A man has been charged with murder over the death of a woman in South Australia.

The 44-year-old woman's body was found on Sunday morning by police inside a home in Mount Gambier.

A man has been charged with murder over the death of a woman in Mount Gambier, South Australia. #9Newshttps://t.co/VimFRpoM8T

A Mount Gambier man, 34, was arrested and charged with murder. He was refused bail and is due to face Mount Gambier Magistrates Court on Monday.

Novak Djokovic has earned a milestone-equalling 20th grand slam at Wimbledon after dousing Matteo Berrettini 6-7 (4-7) 6-4 6-4 6-3 and equal the historic slam tally of his great rivals Roger Federer and Rafael Nadal.

Making it clear on Centre Court as he held the gentlemen's singles trophy aloft for the sixth time that he's not content to keep this as a shared accolade for very long, Djokovic asserted that "an incredible journey is not stopping here".

My team, my family, thank you for everything ❤️ pic.twitter.com/p97F6WpzPV

Asked if he considered himself the best male player of the Open era, Djokovic said: "I consider myself best and I believe that I am the best - otherwise I wouldn't be talking confidently about winning slams and making history.

"But whether I'm the greatest of all-time or not, I leave that debate to other people.

"But I am extremely honoured to definitely be part of the conversation."

Barty to give Olympic gold 'a crack'.

Golden girl Ash Barty is promising to "give it a crack" as she eyes one of the most elusive feats in tennis at the looming Tokyo Olympics.

But fellow former prodigy Jelena Dokic believes not only can Barty reign at the Games but also pull off a rare career grand slam with victories at the US Open and Australian Open as well.

Ash Barty may have realised one dream at Wimbledon but the chance to achieve another awaits in Tokyo.https://t.co/kJo88wwTpE

Next up is the Tokyo Games starting on July 23 with the tennis getting under way from day two.

Asked if she could win gold, Barty said: "I'll give it a crack, like everyone else will be, but I'll certainly be giving it my all."

- British billionaire Richard Branson has climbed his Virgin Galactic passenger rocket plane more than 80 kilometres above the New Mexico desert in the vehicle's first fully crewed test flight to the edge of space.

Branson, one of six Virgin Galactic employees who strapped in for the ride, touted the flight as a precursor to a new era of space tourism, with the company he founded poised to begin commercial operations next year.

- Two firefighters have died as several fires rage in the US West amid searing heat.