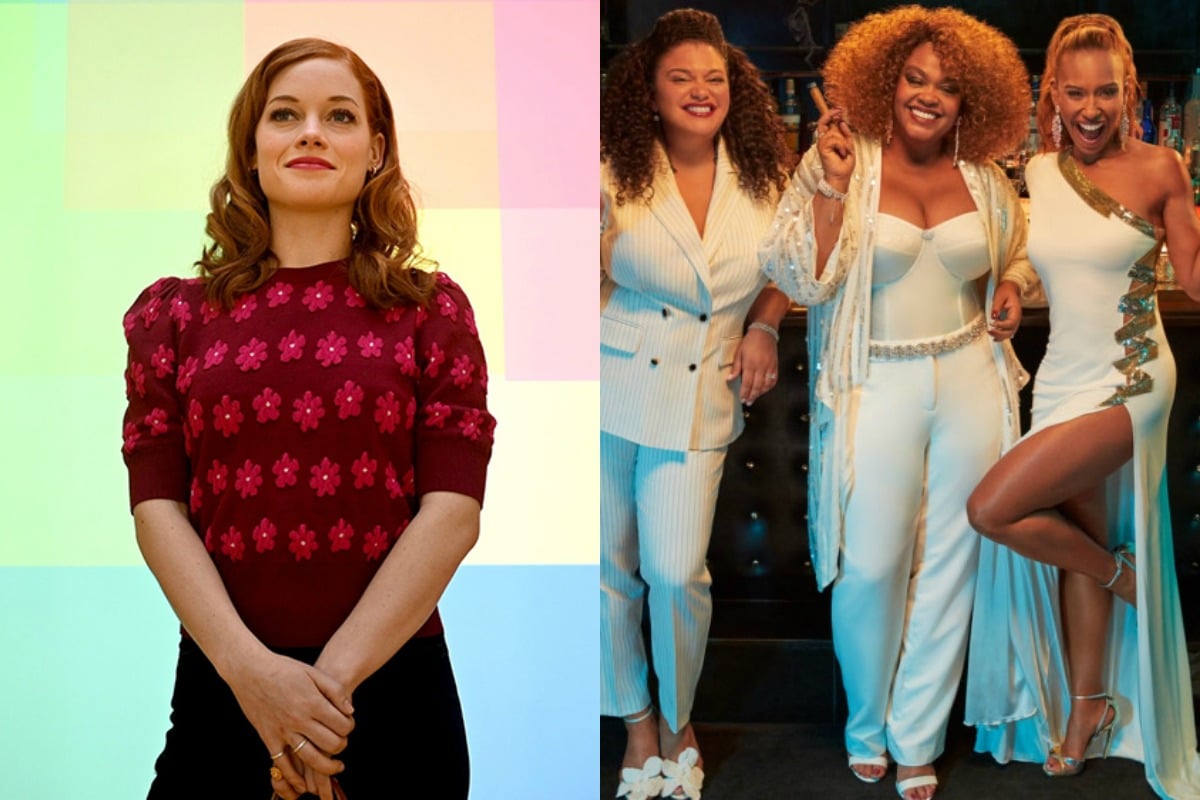 Summer is coming to an end, meaning we no longer have to feel guilty about spending our weekends hauled up in bed binge-watching TV shows.

Yep, now is the perfect season to lock yourself down for a month-long streaming session.

And Stan has us sorted, with a bunch of brand new TV shows and movies about to drop in the next few weeks.

Whether you’re a fan of rom-coms, true crime series or reality TV, Stan has something for all of us to obsess over.

Here is every new TV show and movie coming to Stan in March 2020.

If you were a fan of Glee, then get stuck into the new musical-comedy series, Zoey's Extraordinary Playlist. Jane Levy plays computer coder Zoey Clarke, who after an unusual event suddenly starts to hear the innermost wants, thoughts and desires of the people around her through popular songs. At first,  Zoey understandably questions her own sanity but soon realises this unwanted musical curse is actually a pretty incredible gift.

Bob Odenkirk is back in season five of Better Call Saul. If you haven't seen it, the comic crime drama follows the story of small-time lawyer James "Jimmy" McGill and a series of extraordinary, and often tragic, events that break his spirit and lead him to create his dodgy scam artist alter-ego, Saul Goodman.

On the topic of dark comedies, Black Monday follows the story of Maurice “Mo” Monroe, played by Don Cheadle, as he and a group of outsiders take on the blueblood, old boys’ club of Wall Street. The series is centered around October 19, 1987, aka Black Monday, the worst stock market crash in Wall Street history. To this day, no one knows who caused the crash – until now.

Throughout the two seasons, the stakes begin to rise and so do the body counts.

Double episodes will be released weekly.

RuPaul's Drag Race: Untucked is also returning for Season 12, giving us an all-access pass to the backstage drama.

If you're in the mood for a comedy, First Wives Club, based on the smash-hit movie of the same name, follows three previously estranged best friends who reunite to help each other through divorce, an unsatisfying marriage and a cheating spouse.

If you're on the hunt for a gripping documentary look no further. The Kingmaker follows the life of Imelda Marcos, the former First Lady of the Philippines, and her efforts to exert control over the country through support for President Rodrigo Duterte and the candidacy of her son Ferdinand “Bongbong” Marcos.

The documentary features the voices of political dissidents who give damning testimony against the Marcos family.

Also for documentary fans, The Trade is back for a four-part second season. The docuseries follows Central Americans on their journey to the United States as well as others who are heading back home after being deported. The Trade shines a light on migrants' struggle for survival and the smugglers and traffickers who take advantage of their vulnerabilities every step of the way.

The true crime series follows the controversial story of former lieutenant, Clint Lorance, who's serving a 19-year sentence for murder at the United States Penitentiary, Leavenworth. When deployed in Afghanistan in July 2012, Lorance ordered fire on three local men riding a motorcycle, killing two of them and outraging his platoon.

Throughout the series, Oscar-winning filmmaker, Steven Soderbergh, gives us a firsthand account of a soldier navigating the U.S. Army’s legal system and the emotional debate that ignites when Lorance tries to overturn his conviction.

In the second season of the crime series, Hidden, DCI Cadi John (played by Sian Reese-Williams) and DS Owen Vaughan (played by Sion Alun Davies) are called into action when they receive an anonymous tip-off that leads to the discovery of a decaying corpse. The two detectives race against the clock to uncover the identity of the murderer but things take a turn when they tackle the dangerous mountains of Blaenau Ffestiniog to find the answer.

The fourth season of 60 Days In will be landing on Stan in March. For those who haven't seen it, the series gives participants the chance to be incarcerated as undercover prisoners for 60 days to help investigate the issues plaguing Etowah County Detention Centre in Alabama. In season four, participants face the biggest challenge of their lives as they attempt to rid the jail of contraband and corruption.

Starring Charlotte Riley and David Suchet, the drama series centres around the British newspaper industry. The show gives us a look into the main character's lives as they attempt to balance work, leisure time and the never-ending pressure of the 24-hour global news cycle.

Other continuing series in March

The dark psychological thriller follows the story of an industrial worker, Trevor Reznik who suffers from insomnia and hasn't slept in a year. When Reznik unintentionally causes an on-the-job accident that horribly injures a coworker, he begins to doubt his own sanity and descends into paranoia.

In the hilarious comedy, a dictator by the name of Aladeen travels to New York to address the United Nations Security Council. But his plans go awry when a hitman hired by his uncle, Tamir, kidnaps him.

If you're after an action movie, The Italian Job is a remake of the hit 1969 British film of the same name. The plot follows a crew of thieves who plan to steal gold from a former associate who double-crossed them.

Starring Leonardo DiCaprio and Kate Winslet, Revolutionary Road is a romantic drama about an ideal couple, Frank and April, who live with their two children in the suburbs of Connecticut. But when the pair start facing problems in their marriage, April decides to move to Paris.

In the hit rom-com, lifelong friends Emma, played by Natalie Portman, and Adam, played by Ashton Kutcher, decide to take their relationship to the next level by having sex. The pair decide to make a pact to keep things purely physical, with no jealousy, no expectations and no strings attached. But that doesn't last long.

The film follows the love story of Prince Seretse Khama who is about to return to Bechuanaland and become king, after studying abroad in London. But the Prince ends up falling in love with Ruth Williams, a white woman from south London, which causes problems amongst his family and the British government.