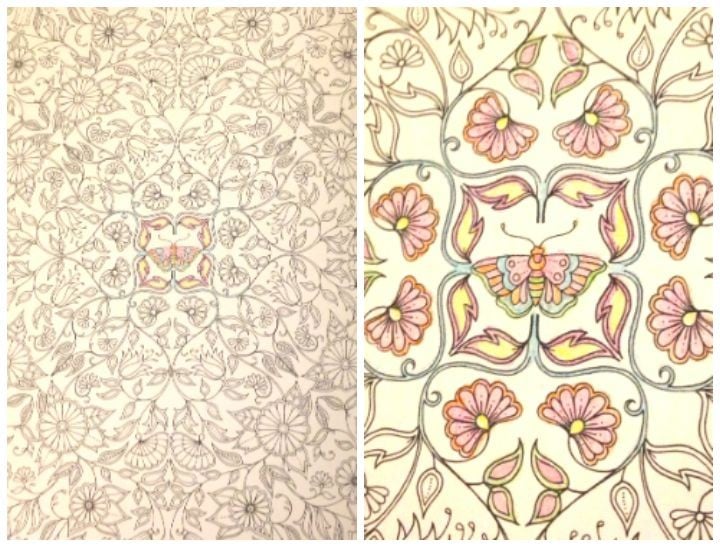 Finally, there’s a de-stressing technique that is actually fun and colourful, and it’s taking the world by storm: colouring books for adults.

Your favourite childhood pastime has now become the hottest health and wellbeing trend.

Case in point? Earlier this year, the top-selling books on Amazon were not complex literary novels, but Johanna Basford’s two colouring books for adults: Secret Garden and Enchanted Forest.

And apparently, colouring in comes with a multitude of health benefits. Dr Suzy Green, clinical and coaching psychologist, and the founder of The Positivity Institute, believes that the activity can help reduce stress, while simultaneously promoting wellbeing and calm.

I decided to give it a go.

As much as I love colouring in with my toddler daughter, I found that her colouring books were a bit too… easy for my well-honed, grown-ass woman skills.

I purchased Secret Garden, by Johanna Basford, as I thought it had the most interesting and detailed illustrations out of all the books. I chatted to Alec, an employee, and asked him what sort of person purchased adult colouring books.

When he paused, I asked, “Are they people just like me?” Alec agreed, and said that it was mostly women in their 30s and 40s, often mothers, who were interested in adult colouring books. Hey, even Zooey Deschanel, is a fan of these books, posting a link about the book on her Facebook page.

With all of these endorsements, I took to my Secret Garden colouring book with much excitement. I coloured this bestselling book over the period of a week, and slowly grew to enjoy the process.

Initially, it was really frustrating, because the illustrations are so finely drawn that I felt like I was going blind trying to colour within the lines. The colouring pages are full of teeny tiny leaves, flowers and bugs, and sometimes I wished that I had a magnifying glass to help me out. I was also using crummy pencils, which only produced faint colours.

I switched to using bright markers instead, and on pages with larger illustrations. That’s when I found the process more relaxing and enjoyable. It was a soothing, methodical and colourful way to spend time in the car, as my toddler daughter slept.

The book and markers in my bag were a physical reminder that I needed to relax and have some time to myself.

Dr Green agrees that colouring in is great for our mental state.

“When you’re colouring in,” says Dr Green, “and wanting to create a beautiful outcome, then you have to bring a focused attention and mindfulness to stay within the lines.”

Another benefit is that it involves an immersion in colours and drawings, as well as experiencing “emotion contagion”.

“Colouring in can definitely be used to develop the appreciation of beauty and excellence, in terms of staying within the lines,” Dr Green enthuses.

When I told Dr Green that I enjoyed colouring in with my daughter, she said that I was experiencing “emotion contagion” – that is, I was sharing the positive emotions that my daughter experiences when she is colouring.

An added bonus was that I was simply spending time with her, and sharing an experience.

For me, the best thing about using an adult colouring book was that it reminded me how much I love colour and painting. As a result, I was inspired to spend some time painting canvases this week, which was a lot more relaxing and enjoyable.

Psychologist Gloria Martinez Ayala told the Huffington Post that colouring can reignite positive memories from childhood. She explains that colouring “takes us back to our childhood, a period in which we most certainly had a lot less stress”.

Colouring may also help us to train our memories in general. A 2009 study found that participants remembered 29 per cent more names which were read aloud from a list, if they were listening while colouring at the same time, compared to a group who were not colouring while hearing the list.

If you’re looking for a new way to relax, while also enjoying stunning illustrations, definitely give an adult colouring book a go. And who knows, it may open up doors to other creative ventures, too.

A version of this post originally appeared on The Glow.

Have you tried an adult colouring book? Or do you have some other stress-relief tips to share?

Easy ways to make your home resemble a magazine shoot (without killing the planet).

The sneaky toxins you use every day (and how to avoid them).

The simple, realistic changes that make a huge difference to your health.

How to improve your life in 60 seconds. Yes, we’re serious.

Oh this is such an awesome idea! I love colouring with my 3 year old, didn't think about this as being a valid "stress relief". I just saw they have the books on sale at Eckersleys....and the pens too. Great advice on looking at the pens as opposed to pencils too

I was suffering from extreme anxiety the other night (I'm OS, my aunty is sick and I'm not sure what is happening, plus have a tendency towards anxiety anyway) and in the restaurant, they had paper place mars and crayons on each table. I found drawing pictures really helped my anxiety calm right down! And I wasn't the only adult with the same idea!! When I get home, I'm going to buy some colouring books and textas for sure!!