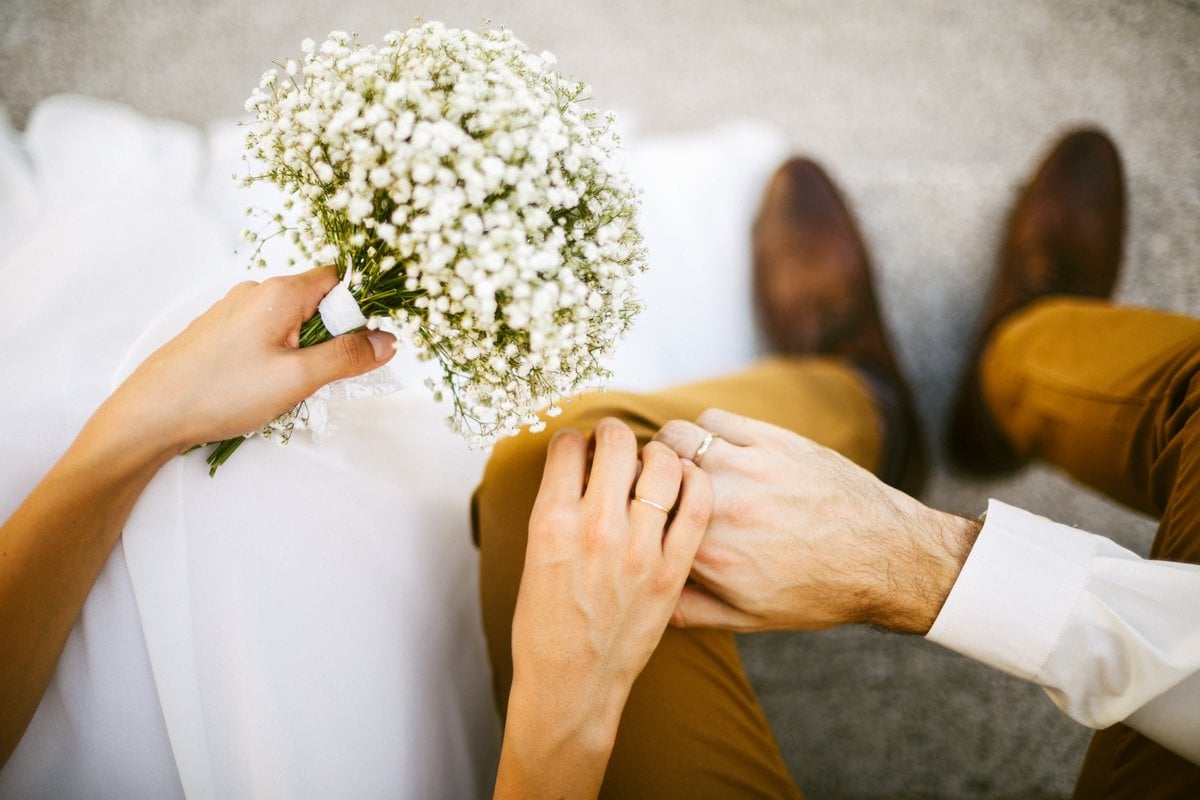 "What’s going on here?" Gramma Karen found me sitting in my mother’s Ford van in the passenger seat, the door open in a failed attempt at combating the summer heat.

Tears fell from my eyes, and embarrassment burned my face. "I just wanted to make sure Merrick has something to eat that he likes, and I don’t know why it’s such a big deal."

"Ah, so that’s what the fight was about," Gramma took a drag on her cigarette and exhaled a cloud of smoke that smelled like summer days at the cabin. "Do you want to fix this and get married tomorrow?"

I knew I didn’t want to, but I didn’t trust myself.

Watch: When I knew our relationship was over. Post continues below.

In the year and a half I’d been engaged, no one asked me if I wanted to get married. I felt my stomach clench. My brain screamed, "No! No, I don’t! I want to travel the world and figure out what I actually want to do with my life. I want to write! I want to live in a crappy studio apartment that’s walking distance to a cafe where a barista knows my coffee order. I want to make my own decisions, and I want to be free."

Then, the part of my brain that has been repeatedly duped by societal expectations chimed in and reminded me that I’d dated this man for five years, so getting married was the next step.

What else did I think I was going to do?

Getting married meant I was valuable as a daughter and a woman; being single was definitely not the next life-move expected of me.

If I walked away now, I’d disappoint my family, friends, and everyone who knew me. Besides, it’s not like I could make it on my own. (I’m not even kidding, I actually believed that!)

The shoulds won, and I nodded. Instead of disappointing my family and friends, I disappointed myself.

Gramma brought my fiancé outside and talked us through the situation. I’d gone against his mother’s wishes. I ordered a burger for my younger brother at the rehearsal dinner instead of forcing him to eat the barbecue chicken or spinach lasagna she’d provided on the menu. I asked her about it in advance, and she’d refused, saying he could just eat what was provided.

The kid was 12, a picky eater, and acting as my bridesman in the wedding. Besides, it’s a burger... couldn’t we just let the kid eat the burger?

When my mother-in-law-to-be discovered that I’d purchased and paid for the burger anyway, she called me out.

Rather than support me, my fiancé sided with his mother. I believe the words "ungrateful brat" were used to describe me.

"If you’re married, you two have to be a team — no more siding with your mother. You’re on your wife’s side always." Gramma’s advice was solid, and my fiancé nodded. We returned to the rehearsal dinner.

Later that night, in the bridal suite with my Maid of Honour, thunder rumbled outside, matching the turmoil within me.

"What if I’m too young? What if I’m supposed to be single instead? I don’t think I can get married tomorrow."

Trajectory instead of self-discovery.

Once you’re living near the ocean in an apartment with a man, two cats, and a new living room set, it’s easy to make the leap to married life.

There’s probably some truth to that about life generally. It’s easy to get swept up in the flow of life without stopping to decide if the direction you’re heading is one you really want. I suspect it’s even more difficult to change direction when you aren’t sure who you are.

So, when my boyfriend of several years woke me up at midnight to propose with a very modern ring, I said yes.

I ignored the thought that if he didn’t know that I was more of an art déco vintage sort of woman that perhaps we shouldn’t get married. (Yes, I know it’s just a ring, however, my love for all things vintage comes through if someone is paying attention to my taste in clothing, hats, literature, and music. We should all marry someone who sees us.)

Through the next year and a half, I spent a significant amount of effort quieting that voice.

The problem with trying to quiet your inner voice, the one that really knows who you are even if your conscious mind doesn’t quite yet, is that it doesn’t work, at least not in any real way.

You can go through the motions and, to the outside world, it might look as if you’re making choices that are true to you. You may look happy and fulfilled, but inside, you’ll be dying a little bit each day.

Living in a box formed by expectations makes you a big fat liar. When you can no longer see over the walls, when you’ve lied to yourself for years, you won’t even remember you have a truth.

The next day I sipped mimosas while a stylist piled my curls atop my head. I posed for photos while getting dressed, and I asked my mother to attach the pearl-studded veil we’d made together.

When she looked at me with tears in her eyes, I knew that if I continued to squeeze myself into the box of expectations; I was doing the right thing.

Listen to Mamamia Out Loud, Mamamia’s podcast with what women are talking about this week. Post continues after podcast.

I’m not saying that my mother pressured me into marrying my ex-husband; I can’t remember a time either of my parents said anything affirming my choice to get married or against it. But, the message I got from watching the adult women I knew, as well as from the media, was that a woman’s worth was determined by whether or not someone wanted to marry her.

A woman’s life was complete when she became a wife and mother. It didn’t occur to me that I had another choice. I’d never seen someone make another choice.

In the elevator, on the way to the ceremony, a little girl told me I looked like a princess.

Her mother told her I was getting married and that she would someday too. I wanted to lean down and whisper to that girl that she didn’t have to, that she could do anything else, that she could fly instead of remain tethered.

But I smiled instead. Still trying to convince myself I was excited.

By the time I walked down the aisle, I was an expert at abandoning myself.

My flower girl and her mother glided down the aisle in front of me. My tiny niece was the only child in attendance at our wedding because my mother-in-law didn’t think children belonged at weddings.

Weddings were formal events for adults to enjoy. Any place where people were drinking, dancing, and carrying on was no place for tiny feet.

Every wedding I’ve been to since has been chock full of children thanks to the way my giant family reproduces.

Every time the DJ plays the chicken dance and tiny humans twirl away from their parents to wiggle around the dance floor, I’m reminded of the joy that was absent from my first wedding.

It’s a reminder to make decisions that are true to who I am and what I think is important, rather than acquiescing to the preference of those who are simply more vocal.

Gramma Karen led our ceremony that day, careful to honour the wishes my fiancé and I expressed to keep God out of the ceremony.

I married a man who was a staunch atheist, from a family with similar beliefs that they’d declare loudly every chance they got.

My family was Catholic and while I certainly didn’t subscribe to the strict rules of that particular dogma, I did and have always believed in a great spiritual power that unites us all.

But when my mother-in-law and husband-to-be decided they wanted all mention of God left out of the ceremony, I agreed because I wanted to keep the peace. I wanted to be worthy of love and pride, and if a man wanted me, I thought I was.

I spent so much time ignoring my inner voice that trusting it would have felt like a mistake. So, I abandoned myself on the little issues and the big ones until the voice inside me gave up.

It’s not that I didn’t love him; I just neglected to love myself first.

It wouldn’t be true to say that I never loved my ex-husband. The day I accepted his proposal and the day I married him, I felt love, at least as far as I knew.

I stood in front of my family in a chapel and said yes, and then I went to a reception that felt more like someone else’s party than my own (because it was). I spent the next six years trying desperately to figure out how to be happy in the life I’d chosen.

The problem was that I didn’t really know myself at all, and the parts of myself I knew — the parts that would bubble up and beg for freedom, for more, for something different from what I was raised to want — I didn’t like.

Those parts of me were scary, so I ignored them as much as I could. I tried to do the right thing. When I couldn’t stand the pressure of cramming myself into that box anymore, I begged for change because I was changing.

But, by then, my husband didn’t want change. He wanted me to be the woman he married.

But, that woman never actually existed. She was just a shell of a person trying to do the right thing. She didn’t know that doing the right thing means disappointing others so that you never disappoint yourself.

Maria Chapman is a writer, coach, educator, and disability advocate living in Connecticut with her husband, five children, and aging rescue dog. She blew up a 13-year career in education to chase a dream. You can subscribe to her publication Lies We Tell Ourselves  here where she examines the stories women believe that hold them back (and how they can move forward). You can follow her on Instagram, Facebook and  Twitter more of her writing can be found here.