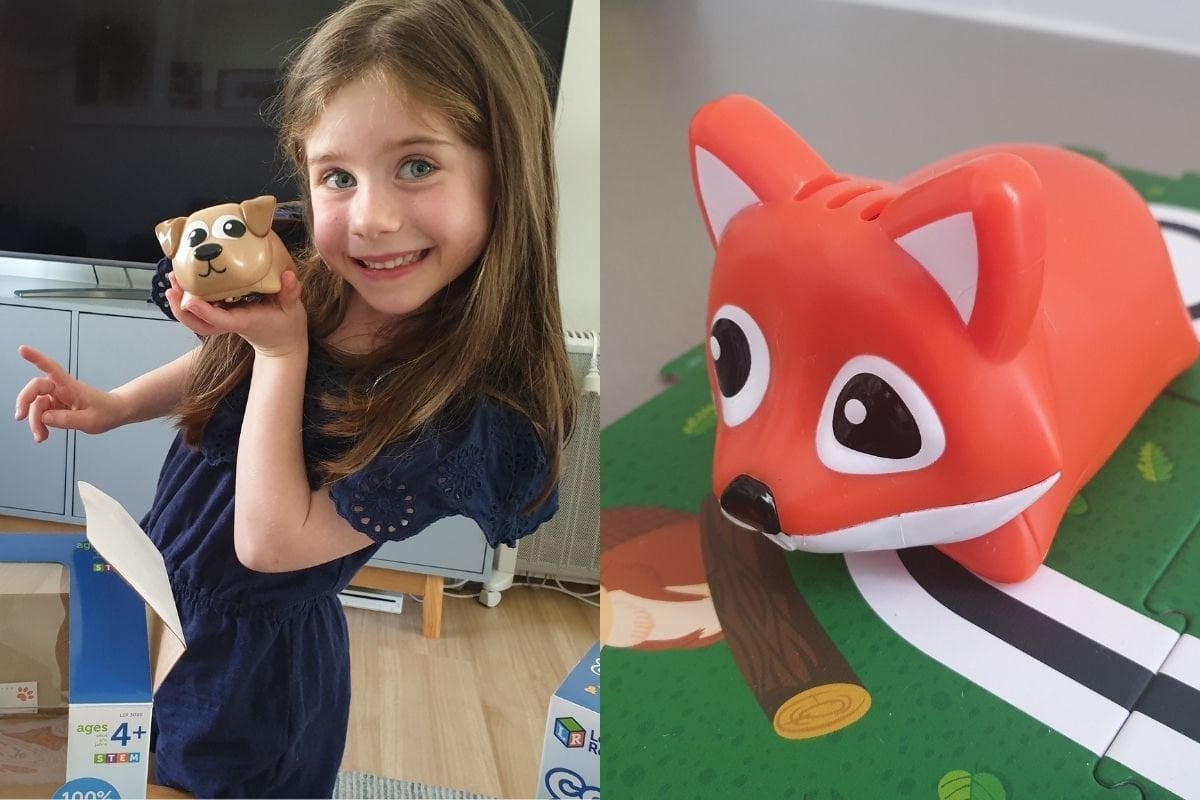 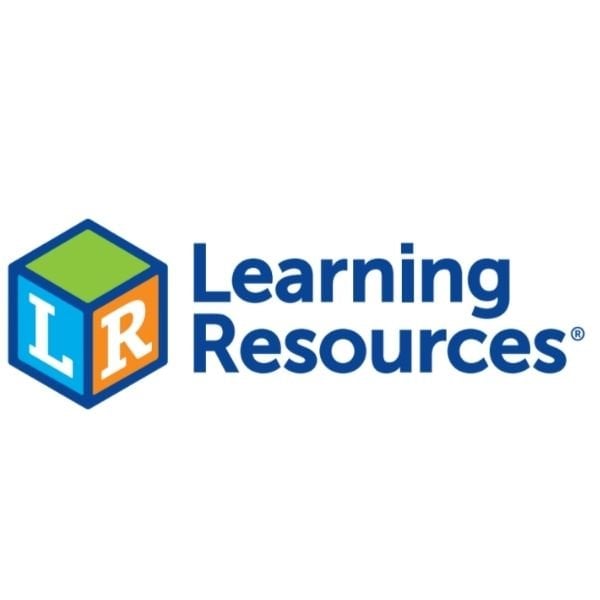 Thanks to our brand partner, Learning Resources

Look, I’ve seen movies where hackers write in seemingly endless ones and zeros in order to bring down bank vaults and I enjoyed The Matrix trilogy, but that’s pretty much my exposure to coding.

To me, coding looks like another language I’m not sure I’ll ever decipher. But it's one my daughter will in the years to come, with coding now compulsory in primary schools.

What I didn't know was that you can start even earlier than that. As young as four, according to Learning Resources, an award-winning brand with some pretty darn fun coding robots (including 'coding critters') that introduce kids to coding and STEM learning (Science, Technology, Engineering and Mathematics) through play.

When these robots arrived on my doorstep, it was smack bang in the middle of school holidays, and by this stage we’d done all the crafting one can handle so we ripped open the packaging with glee.

To my five-year-old daughter’s delight, she pulled out a little creature by the name of Ranger, a little dog on tiny wheels who, along with his little dog sidekick Zip, were promising to show us how to learn coding.

I say us, because this was going to be as much of a learning curve for me as it was Miss 5. 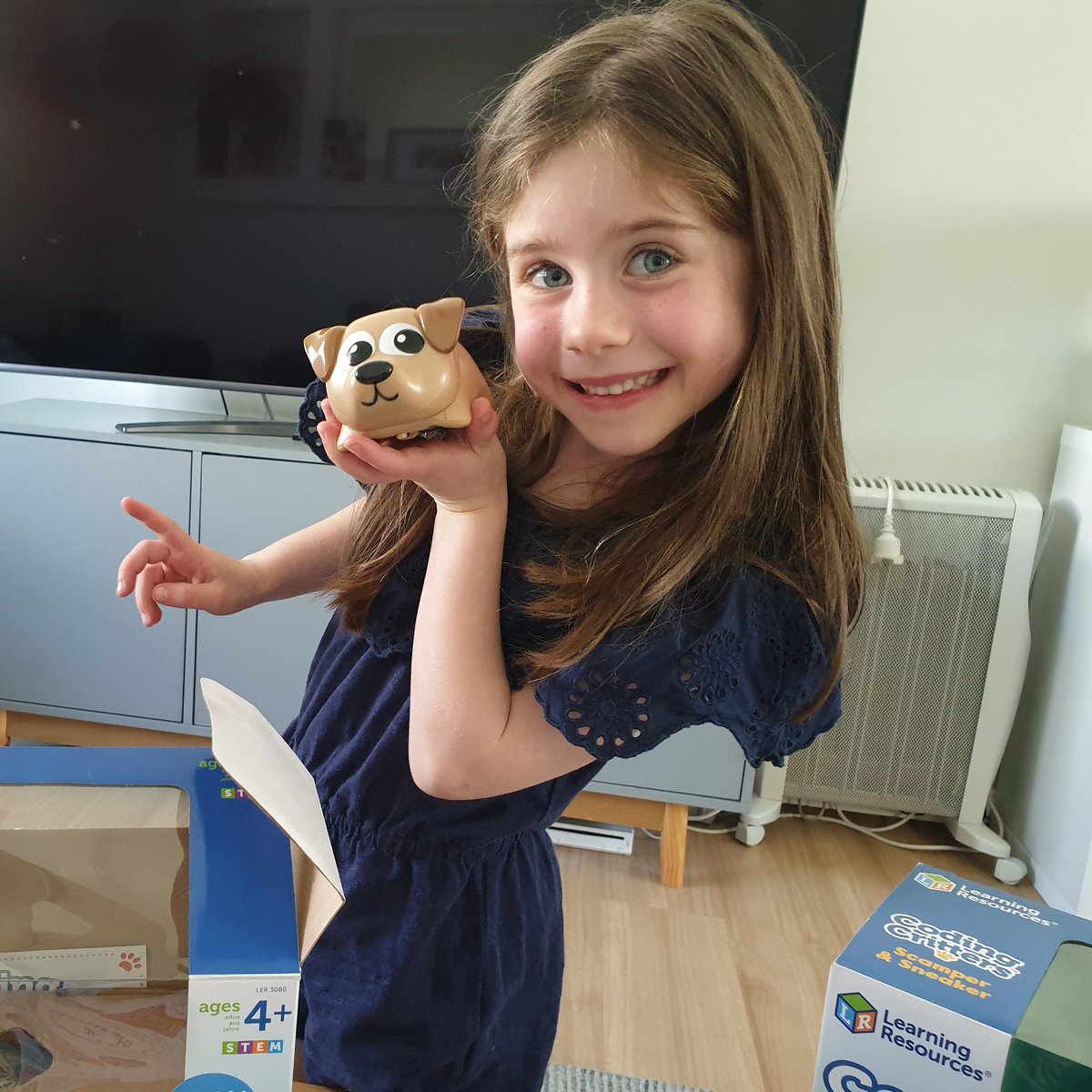 My daughter and Ranger. Image: Supplied.

In the box alongside Ranger and Zip, there was a slide, a seesaw, a doghouse, a ball and a bone, and little paw-shaped cards that had commands drawn on them: forward, left, right and reverse.

The idea is that you lay the cards out in the order of commands you want to give Ranger so that he follows the predetermined path. A little book comes with it so your coding follows a story where Ranger can play hide and seek, fetch a ball or catch Zip as he takes a trip down the slide.

Now, let me be clear, this is not on-screen coding. You are not inputting #%^{[[j001101010)%^ like Angelina Jolie, circa-Hackers style. This is basic coding, laying the groundwork for the way your brain needs to think in order to do bigger things down the track.

After popping in the batteries and turning Ranger on, we endeavoured to make him move forward three steps. We laid out the three green paws and then coordinated that with the 'move forward' command, which is pressing the 'forward' arrow on his back three times and then the 'go' button. Sure enough, Ranger emerged from his doghouse and approached his favourite toy - his big green ball.

Well, Miss 5 and I now consider ourselves basically coding geniuses so we high-fived at our success and moved on to page two of the story. 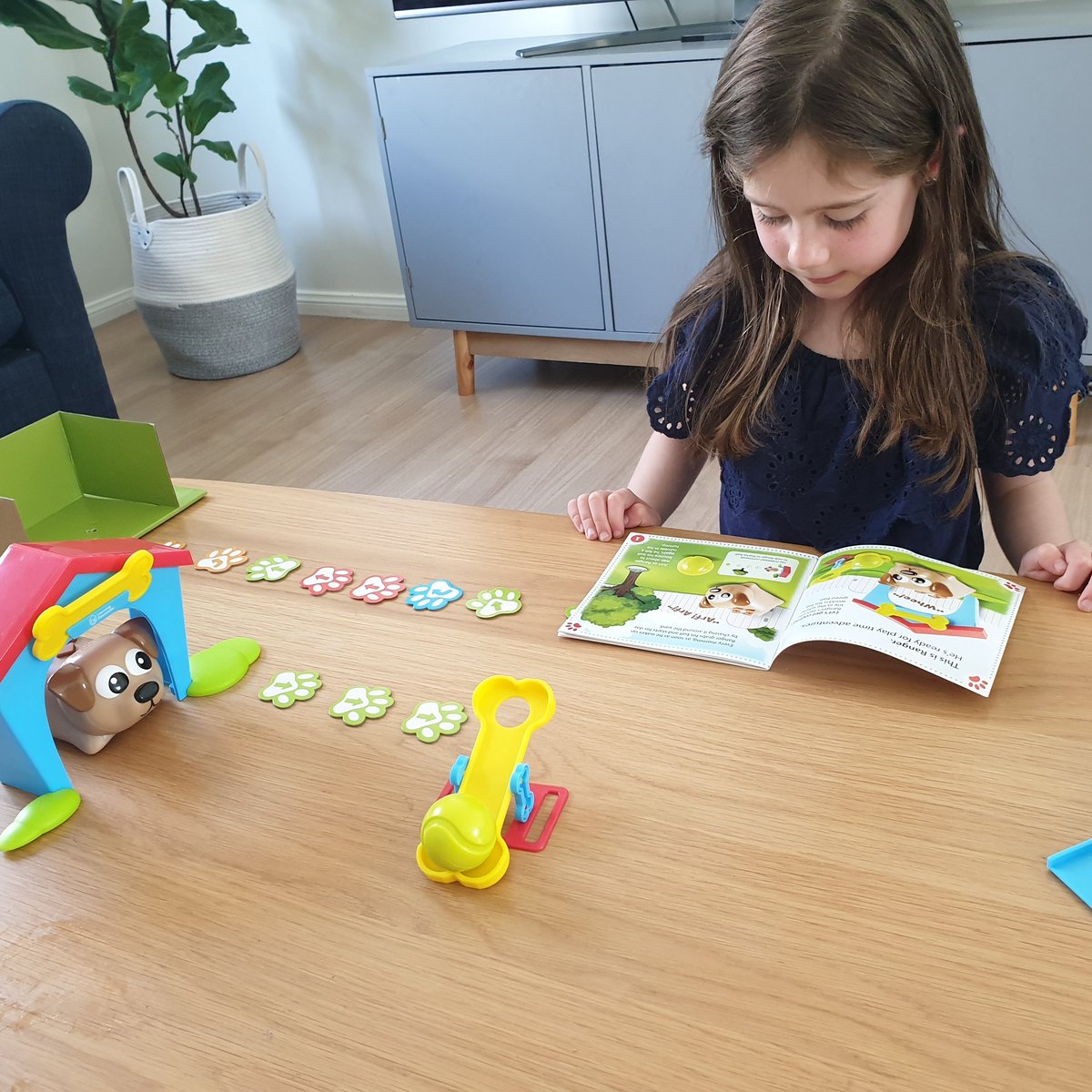 Miss 5 and her new mate Ranger. Image: Supplied. This time, Ranger needed to collect his bone and deliver it to his little mate Zip. One forward step to retrieve the bone and one right turn to meet Zip and we are there. YES!!

After following a few more of the pages, Miss 5 decided she wanted to freestyle code and it was then I saw her future laid out before her - completing a Masters in Computer Science and basically running some major tech company and I’m totally not getting ahead of myself.

From there she worked out how many steps forward were needed to make it from one end of the hallway to the other and then turn into her bedroom. We also realised that Ranger has a 'play' function where he can dance, take a nap or stop for a snack. The dancing option led to some boogying in the kitchen for the whole family - including the dog.

Next we opened up Botley 2.0, the Coding Robot. Botley 2.0 is a screen-free robot designed to help kids learn to code the same way Ranger and Zip do, but using a remote and with an extended range of commands. 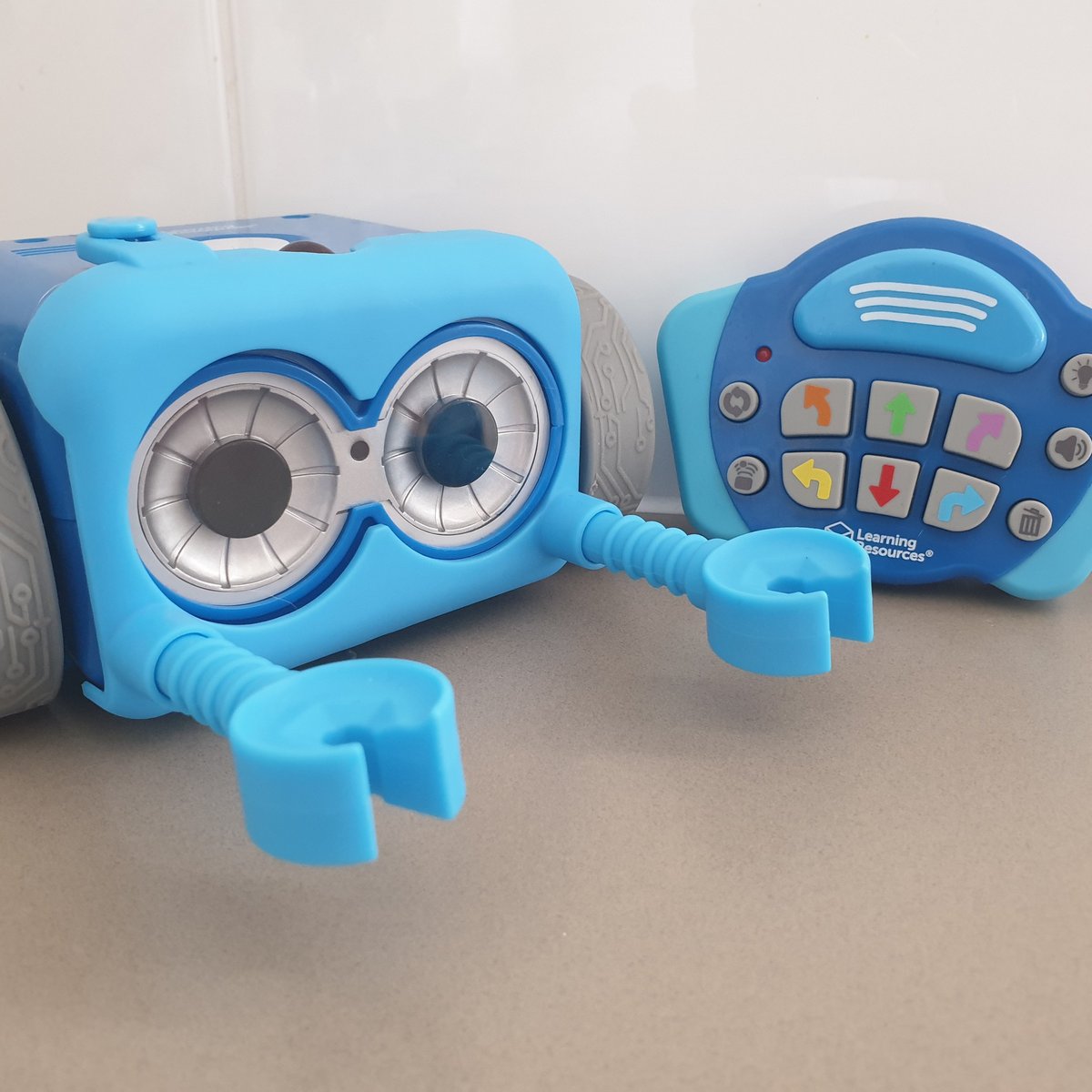 Meet Botley 2.0.  Image: Supplied. Botley doesn't just go forwards, backwards, left and right - he has six different directions including slight left and slight right. He plays tunes and puts on an impressive light show too. You just have to tell him what to do in what order.

This guy allows you to code up to 150 steps, so he can basically traverse the house and turn himself into a ghost before he switches on his lights when it gets dark.

Miss 5 was very impressed, not just with the fun of teaching him how to move and sing but also because he comes with another set of eyes and arms so she could change his colour from orange to blue. It’s the little things, parents, am I right?

She also really enjoyed the fact that if you put things in his path he makes this super cute ‘Huh?’ noise until you clear it for him.

The final coding robot we tried out was a 'Go-Pet' called Scrambles the Fox. 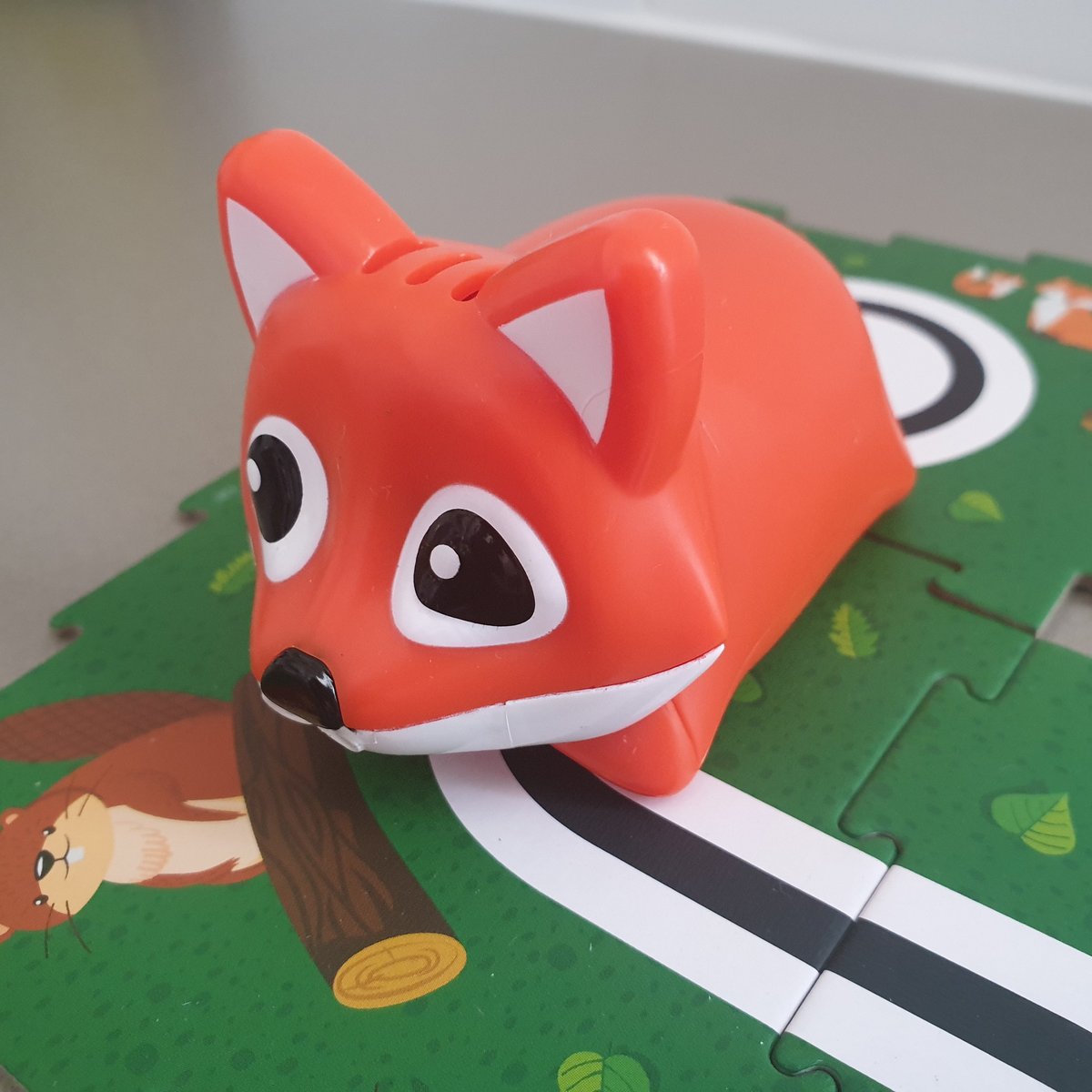 Hey, Scrambles. Image: Supplied. Scrambles can be coded to follow black line paths you create by mixing and matching the path puzzle pieces into a map.

He can turn around at points and do the return journey too.

Scrambles also comes with his own storybook so you can learn to code along with the storytelling.

The idea is that with these simple steps, we’re teaching our kids the building blocks for the STEM subjects they are being encouraged to learn at school, which may lead them into a stack of different career paths down the line.

Experts predict these will make up 75 per cent of future jobs. So, maybe your Miss or Master 5 will be an engineer, an environmental conservationist or fashion designer. They could end up a food science technician or agricultural scientist.

The reality is, STEM isn’t just for the smart kids or for boys. If every kid gets the basics taught well from the start then anyone can go on to enjoy these exciting opportunities.

Basics like counting, ordinal numbers, sequential thought and computational thinking. Throw in a dash of problem solving and we’re setting our kids up for great things.

Learning Resources' coding robots are available at your local Target.

We want to help your kids love learning. That’s why we create toys that spark understanding, turn "I think I can" to "I know I can" and help kids feel like everything is possible. For 30 years, Learning Resources toys have empowered kids all over the world to build critical skills - and get ready to take on the world.