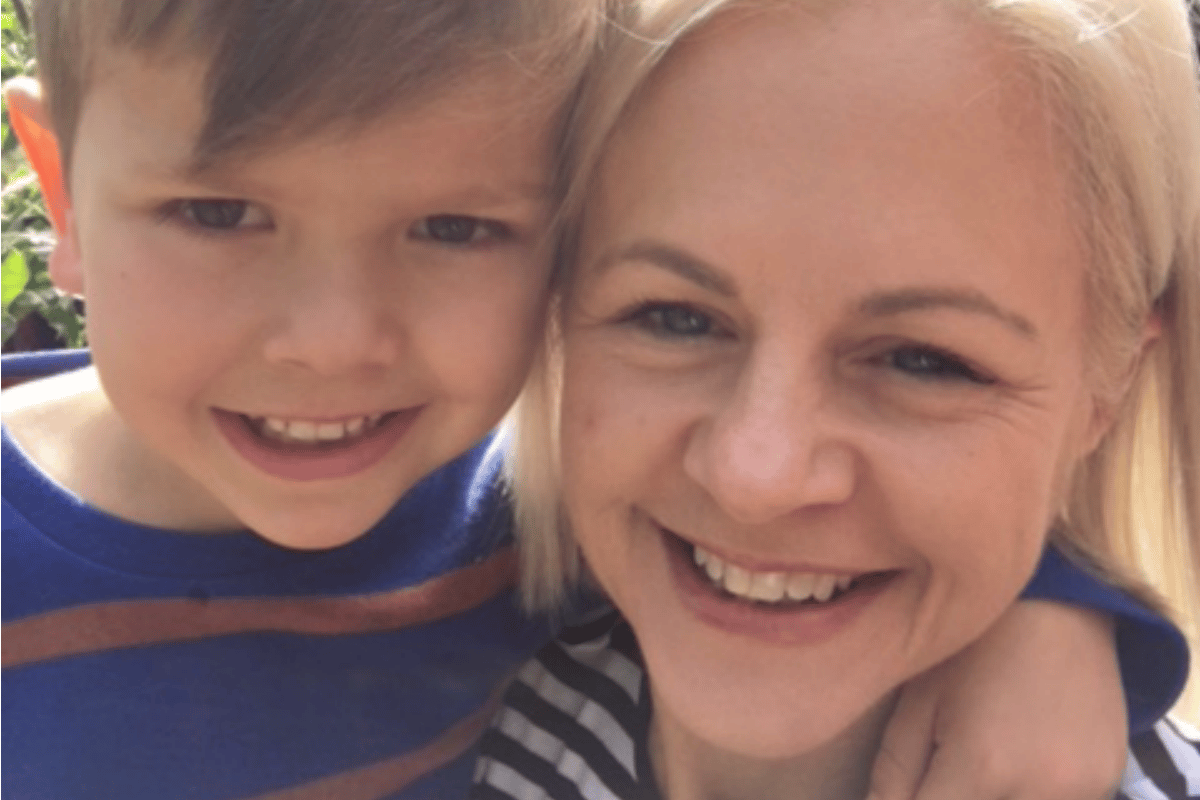 It was my son Charlie’s sixth birthday party and there were 20-plus mini Ninjas in our backyard. Loud and free they were screaming, jumping and laughing –  the sound like balm to the soul, and a gentle reminder that innocence is not always lost.

There were tears of course. The untimely, unfortunate demise of a balloon animal made by the ninja party entertainer who we hired because, like I said, there were 20 of them and we knew we would need reinforcements.

Nearing the end, we’d just sung Happy Birthday and I was preoccupied by how I was going to cut up the ninja cake while 15 of the 20 kids were shrieking orders at me. The bossy little things can barely use their own cutlery but here they were shouting advice on how I was to cut the cake. Sheesh.

On This Glorious Mess, we discuss the correct etiquette for kids’ parties. Post continues below.

In the background I could hear the coaxing and coercing of boys telling Charlie to kiss the little girl beside him. You know the tradition: if you touch the bottom of the cake with your knife you must kiss the nearest person.

My generation spent our childhood singing to songs about kissing in trees so my initial thought was that it was funny. Cute. But Charlie was standing right beside me, my child, whose body nestles right into the curve of my own – and because he is me, my bat signal went off and I sensed he felt uncomfortable.

I didn’t want to have a disproportionate reaction to a ‘nothing’ situation, but in that tiny pocket of time the thought crossed my mind that this was a moment I was probably required to parent my way through.

I turned to Charlie on my right and whispered to him that he didn’t have to do anything, and I turned to the match-makers on my left and handed them both a giant piece of ninja cake and told them whoever ate the fastest could have a second piece.

My little boy is only six and suddenly I’m dealing with the beginnings of consent, and I do not know how this bit of parenting is meant to go.

Party over, the thought lingered on, but I didn’t give it too much energy. I put my head back in the sandpit – he’s six, not sixteen after all.

That is, until a week later, when SBS aired its series The Hunting.

It was compelling to watch.  As a parent to a small person who knows nothing of social media, it would be easy to pretend it’s not something I have to worry about it. It’s not our current reality but the unrelenting evolution of technology means it will most definitely be our future one.

My experience of parenting so far has been many things. Tiring, messy, humbling, terrifying, frustrating, chaotic and buckets of fun. But it has recently dawned on me that it hasn’t yet really been complex and complicated. The consequences of poor parenting decisions (and there have been many) haven’t really surfaced and nothing dire has happened.

At least not yet.

Reflecting on Charlie’s party and watching The Hunting, I realised I had so much more to learn, to figure out and navigate though.  How can we be certain that we are doing the right thing? Do the “experts” even agree on what this is, and should I be studying child psychology because what if my mothering instincts aren’t enough? Even if we do our best, it might not ever be enough. What then?

This is the kind of stuff that keeps me awake at night.

The program explores the subtle and not so subtle pressures that young people face at school and online, but what is even more troubling to watch was the parents - the behaviour they modelled and the influence it had on their children.  It’s a cautionary tale, a confronting truth and worth pointing out that this series was based on true events.

It’s a privilege to be a parent and to raise a good human is important and meaningful work, but it is also hard, and it feels like this infinite task where the goal posts change, and the stakes are high.  It is all we can do other than teach our children about kindness and respect and know that this is the one bit of parenting we have to get right.

There’s no bloody chapter on any of this in What to expect when you're expecting.

In the show's final 10 minutes there is a classroom scene that is powerful and flawlessly summarises the disconnect between the genders and the issues surrounding sexual violence. The boys are asked what they do to avoid sexual violence, and judging by their reactions it was a question they had never considered; they were genuinely perplexed.

When the girls were asked the same question, their reaction was in direct contrast.  The responses (carry our keys in our hand, don’t go out alone, don’t wear certain types of clothes) came effortlessly and steadily because it is a lived experience.

I know it’s a big leap to bridge the gap between six-year-olds kissing at a birthday party to worrying about consent. But from the time Charlie was born to where we are now, it’s been but a blink of the eye so when I blink again, he’ll be 12, then 16.

Today he is a little boy who sleeps with a rabbit called Pink Cherry, so it is difficult to imagine having a conversation with him about online sexual violence and consent. The obligatory “birds and bees” lesson will extend into much darker terrain it seems.

It makes me feel a combination of sadness and of fear. It makes me want to press pause and it reminds me that I only have a limited time before things get real.

When I woke up the morning of Charlie’s birthday party, I knew it would be a day of happiness and delight. What I didn’t expect was that a bunch of tiny ninjas would offer up a lesson and give me pause.

This post originally appeared on the blog Champagne Days. It has been republished with full permission.

On her blog Champagne Days, Tracey Montgomery shares the confessions and chronicles of her life where madness and motherhood are not mutually exclusive. In between scraping scrambled eggs off the floor and peanut butter off the couch, she runs her own recruitment agency.

The only thing that you may have missed, thinking about your son being pressured into kissing the nearest girl against his wishes, is that the girl may not have consented either.

"My little boy is only six and suddenly I’m dealing with the beginnings of consent, and I do not know how this bit of parenting is meant to go.

Party over, the thought lingered on, but I didn’t give it too much energy. I put my head back in the sandpit – he’s six, not sixteen after all."

To be honest, I'm surprised the author hadn't given any prior thought to educating her son about consent and bodily autonomy. Kids should be taught at an early age about boundaries, about appropriate touch and about it being OK to say no. It's certainly not something you should be waiting until adolescence to start talking about.

My own son is only 6 too and yet this question has already cropped up with girls and boys both trying to kiss him. He doesn't like it and we've had to teach him how to set boundaries with others, such as: You need to ask first," and my body, my choice. I don't want him to go along with anything someone else wants him to do, in any circumstances and he has the right to say no.

And we need to teach kids to listen to that 'no' as well. One of my four year old nephew's mates kept grabbing him and bear hugging him. Poor little nephew was freezing up, and clearly saying "stop, I don't like that", but the other kid just wasn't listening. He would chase Nephew, thinking it was a game. It would have been the perfect time for Mum to step in and say "he said he doesn't like it, so it's time to stop now".