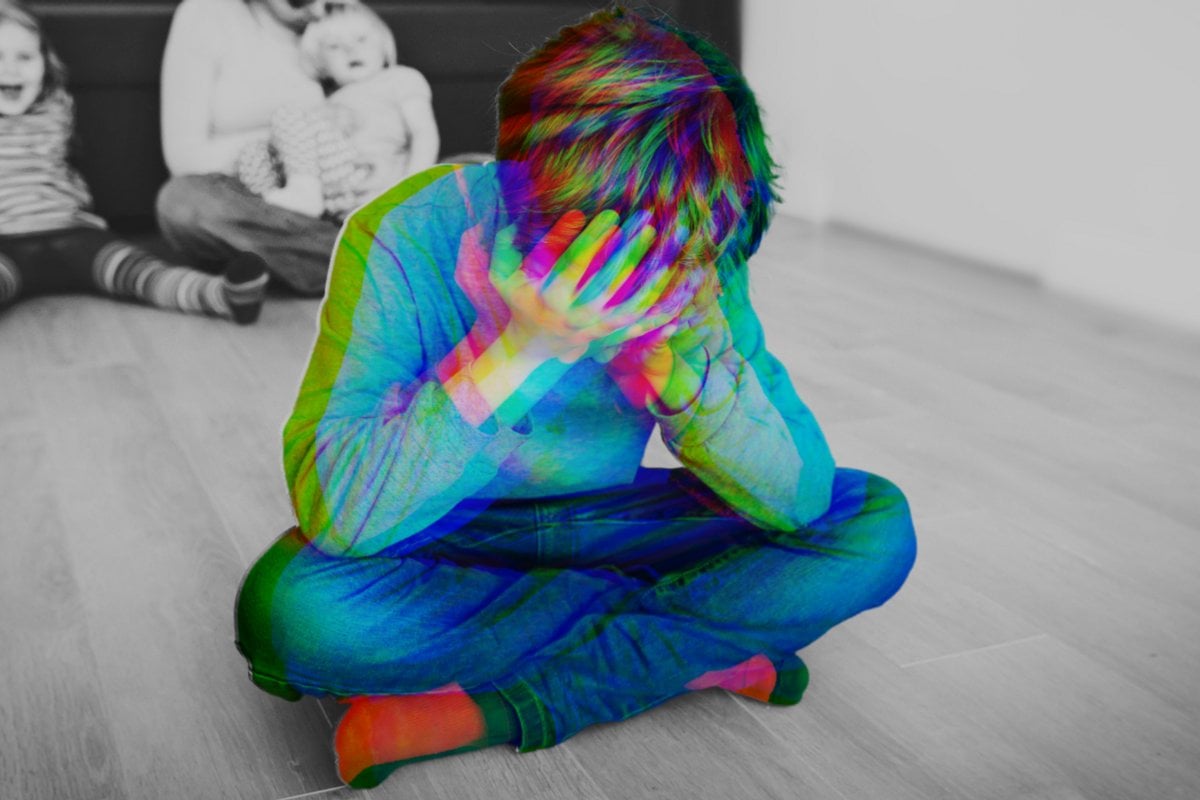 On World Autism Awareness day, I’ve had the sudden realisation that this day is for my son.

While he has been in my life for four years, his diagnosis has been with us for less than one.

This is how it feels to be an ‘other’ mother – a mother navigating the quiet, messy reality that is raising an almost-but-not-quite neurotypical child.

My heart beats faster. My throat feels full. I consciously lift the corners of my mouth, widen my eyes, and take a quick breath.

I’m out with my four-year-old. He’s tired, he has the ‘wrong’ pants on, he’s hungry and I just realised we don’t have his dummy on us. I’m not sure which of us is feeling more freaked out.

This is life with a child who is not neurotypical.

Constant quiet panic. Shameful resentment. Smiling through waves of suppressed tears. Envious glances at other parents with their straightforward, ‘by the book’ kids.

It isn’t like what people imagine, or see from the outside – it’s quieter, sadder, messier, far more complex and just plain different.

The ongoing 'as a mother' debate has a whole other dimension not considered by most of us who weigh into it.

We think about motherhood as binary – you are or you aren’t. But the shades of grey are so much more complex than that.

I have one of both, and the experience of parenting with each child could not be more different.

My Jack, four, is classified as a neuroatypical child.

When he was three, after three years of wondering why I was so terrible at this whole motherhood thing, he was diagnosed with sensory challenges, and ‘high-functioning’ autism.

The diagnosis was a shock, and strangely, a relief – my worst fears (having a child who is not ‘normal’) combined with a secret sense of relief (it’s not me – it’s him).

Life with Jack is a constant challenge.

But because life is not Hollywood, it’s a challenge in subtle, pressing, brain-draining ways – thanks to his anxious tendencies, he’s always within a few feet of me.

He’s still reliant on his dummy and he’s aggressive in social situations because he perceives an attempted greeting or hug as an attack.

But most people in our lives don’t actually know about his diagnosis. This makes him, in their eyes, shy, grumpy, non-compliant and just plain difficult.

How much do you need to pay attention to kids' developmental milestones? We find out on This Glorious Mess: Little Kids. Post continues below.

What sort of child frowns and growls at you when you pass them a shovel in the sandpit? A child who can’t handle the feel of sand on his skin and who is wary of strangers because he can’t predict exactly what they’re going to do.

To many children on the spectrum, the unpredictable nature of human behaviour is a source of constant concern.

Enter Charlie, 2. Neurotypical, with a dash of cheer and more than a sprinkle of charm.

Parenting him is fun. It’s light. It’s uncomplicated. He does the things the books say he’ll do, exactly when they say he’ll do them. His tantrums last all of three minutes.

He smiles and says hello to strangers. He has an appropriate amount of attachment to me. He’s mischievous, funny and strong-willed. He’s not exactly relaxing to be around, but he’s doing all the things the other kids are doing.

The buzz of worry that accompanies my every move with Jack just disappears when I’m with Charlie.

And without that buzz, you can appreciate the delicious comfort of your flat white as you sit together in a café. You can slide out of defence mode and glance at a newspaper and actually read a headline while sticky little hands thumb through a book beside you.

You have the mental bandwidth to look up and notice the barista smile at you and you smile back. It’s so… straightforward.

I’d always wondered why the ‘as a mother’ debate barely registered with me, and I recently realised why.

Because ‘as the mother’ of Jack, I worry, I cry, I comfort, I argue, I negotiate and I deflate.

As the mother of Charlie, I play, I make muffins, I laugh, I chase, I explore and I live.

Parenting Charlie is like a sprint to the milk bar to buy an ice cream you know will be there. Parenting Jack is like running a marathon you know you’re never going to win.

These two experiences are not even a little bit the same. And only because I have one, can I feel the difference of the other.

So next time you see a four-year-old acting strangely in the sandpit, his mum shamefully shoving a dummy in his mouth while she drops her shoulders and takes a breath, do her a favour and catch her eye. Smile.

And look away so she can get on with the job of surviving that moment.

am2590 19 days ago
Reply
Upvote
1 upvotes
Thank you for your insight and honesty. The day is about raising awareness – this involves a range of perspectives, including how difficult parenting can be. It’s irresponsible to sugarcoat reality. The perspective of a parent who has lived with the diagnosis for less than a year and how difficult it has been for them is valid and valuable. Stories that reflect different experiences are equally valid.