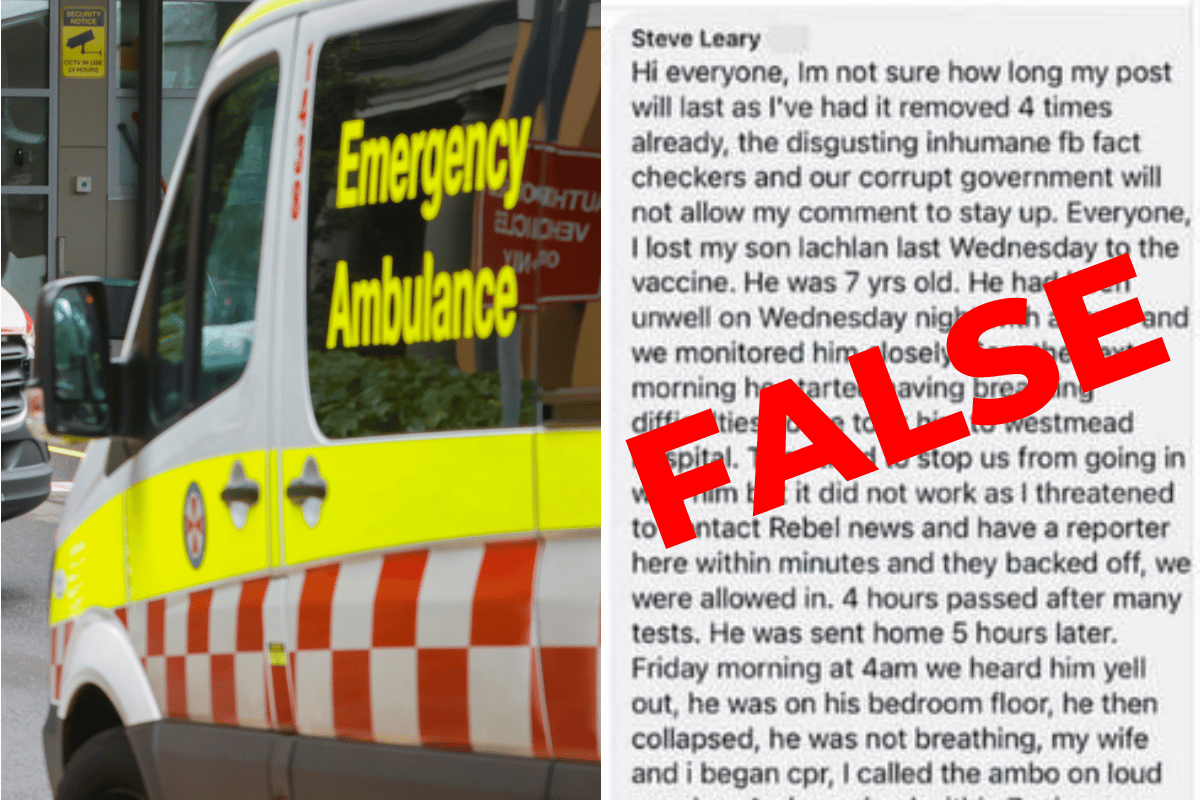 Earlier this month, a Sydney father shared his seven-year-old son died of a "massive heart attack" days after receiving his COVID-19 vaccine.

"Friday morning at 4am we heard him yell out, he was on his bedroom floor, he then collapsed, he was not breathing," the man wrote in a viral Facebook post under the name 'Steve Leary'.

His words were liked and shared by thousands. But according to experts, none of them were true.

In the now deleted post, Leary claimed his son, Lachlan, experienced a fever and breathing problems after receiving the vaccine and was taken to Westmead Hospital.

Five hours later, he was allegedly sent home where he collapsed the following morning.

"My wife and I began CPR, I called the ambo [sic] on loud speaker. Ambo arrived within seven mins [sic]. My son passed away in the ambulance. He had a massive heart attack," Leary wrote.

"The government has ruined my family, they have taken away our only son."

However, there is no record of a Lachlan Leary who died last week, 7News reports. NSW Health told the publication it "has not been able to locate any record of any such incident".

The Therapeutic Goods Administration also said it "has not received any adverse event reports involving the death of any children aged between 5 and 11 years".

The Children’s Hospital at Westmead also addressed the false claim on Facebook, writing, "There are many inaccurate posts currently circulating on social media. There is no record of any child having passed away following COVID vaccination at our hospital."

Leary's identity has also been thrown into question after news sites around the world ran the story alongside a picture of Steve Leary, a man from the United States who formerly served as mayor of the city of Winter Park in Florida.

Unfortunately, this isn't the only time false reports of COVID-19 vaccination-related deaths in children have circulated online in the past month.

Last week, NSW Chief Health Officer Kerry Chant's official Twitter account had to be shut down after it was used to fake posts claiming three Australian children had died as a result of the vaccine.

"Great result from the children's roll-out, only three deaths linked and 106 adverse reactions out of 377000 vaccines," the post, which appeared to be written by Chant, read.

"I would say that is a better result than expected."

"NSW Chief Health Officer Dr Kerry Chant did not author the tweet or the Instagram post attributed to her and the information contained in both of them is incorrect."

According to official data from the Therapeutic Goods Administration, only one death reported in a younger person has been linked to vaccination – a 34-year-old woman who died as a result of thrombosis with thrombocytopenia syndrome.

No children have died as a result of the vaccine. 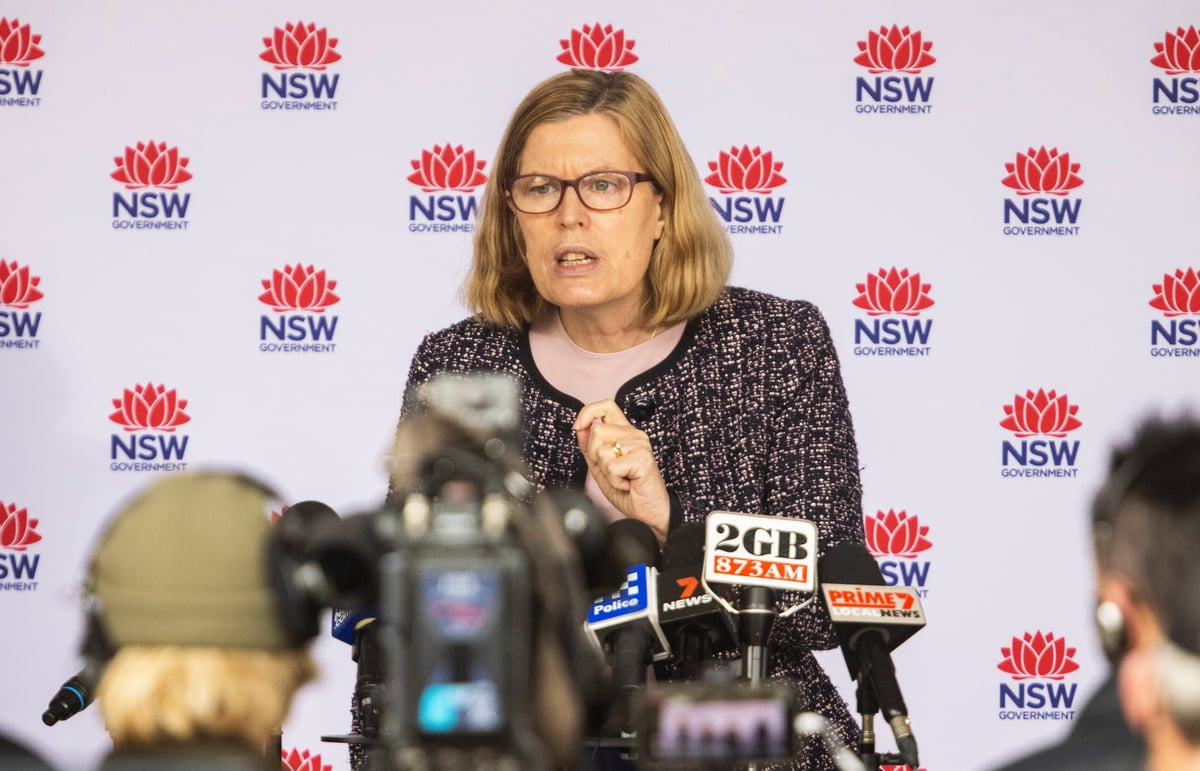 "To falsify such an event shows a complete lack of insight into the consequences of such thoughtless actions," he told Mamamia.

And this frustration is shared by others in the medical community, said Dr Kieran Kennedy, doctor and mental health advocate.

"As doctors it’s been incredibly difficult to see misinformation, false reports and fear mongering gain so much traction across recent years, and when it involves false reports of deaths, it stings particularly as there’s often a sense of someone’s passing being ‘weaponised’ to drive a false agenda and fear," he told Mammaia.

These stories can also be incredibly alarming for parents, particularly after vaccines have recently been made available for 5-11 year olds.

"They potentially create alarm for parents who are in the midst of vaccinating their children, and merely feed into the uncertainty that some parents face with respect to vaccinating or not," said Dr Dunlop.

"Parents are increasingly emotionally vulnerable, and falsifying such tragic events simply plays into the hands of the anti-vax movement."

Dr Kennedy has experienced just how anxious these reports can make parents firsthand.

"I’ve had direct experience working in vaccination clinics across the past year where it’s clear false information online has created significant anxiety for people and parents."

"It’s so understandable why false stories surrounding COVID-19 vaccination causes so much fear - this is something we’ve never had to confront before, that there’s been a lot of uncertainty around and where we’ve had to lean into trusting our scientists and health experts like never before.

"It’s for these reasons too that false reports and fear mongering gain so much attention - our minds really are hard wired right now to soak up information (even if it’s clearly false), and looking out for our safety and that of our family's will of course always be something that really draws us in."

As misinformation and fear-mongering continues to find its way onto our social media feeds, both doctors remind us to stick to reliable sources of information.

"Listen to the very measured, conservative and expert panel of clinicians who have been tasked by the government to keep our community safe with vaccination recommendations. Those experts have determined that it is safe to vaccinate. Unless you are one of those experts, you are in no position to scientifically question their recommendations," said Dr Dunlop.

Dr Kennedy would also like to remind people, "it’s never an over-ask to book an appointment with your GP if you’re seeing things online about the pandemic or vaccines that are causing you query and concern. If you’re worried and asking yourself questions, go to the source - your actual doctor, not doctor google or that random person sharing a misinformed article online".

Parents can also rest assured knowing the vaccine is a safe way to protect your child against COVID-19.

"It’s so key that our kids get vaccinated as well, and parents should be really reassured that the vaccines have been thoroughly trialled and researched to ensure they’re efficacious and safe. While small, the risks of being infected with COVID-19 whilst unvaccinated still far outweighs any risks from the vaccine, so it’s about making an informed decision to protect your children, your family and your community. Vaccination is absolutely the way to go."