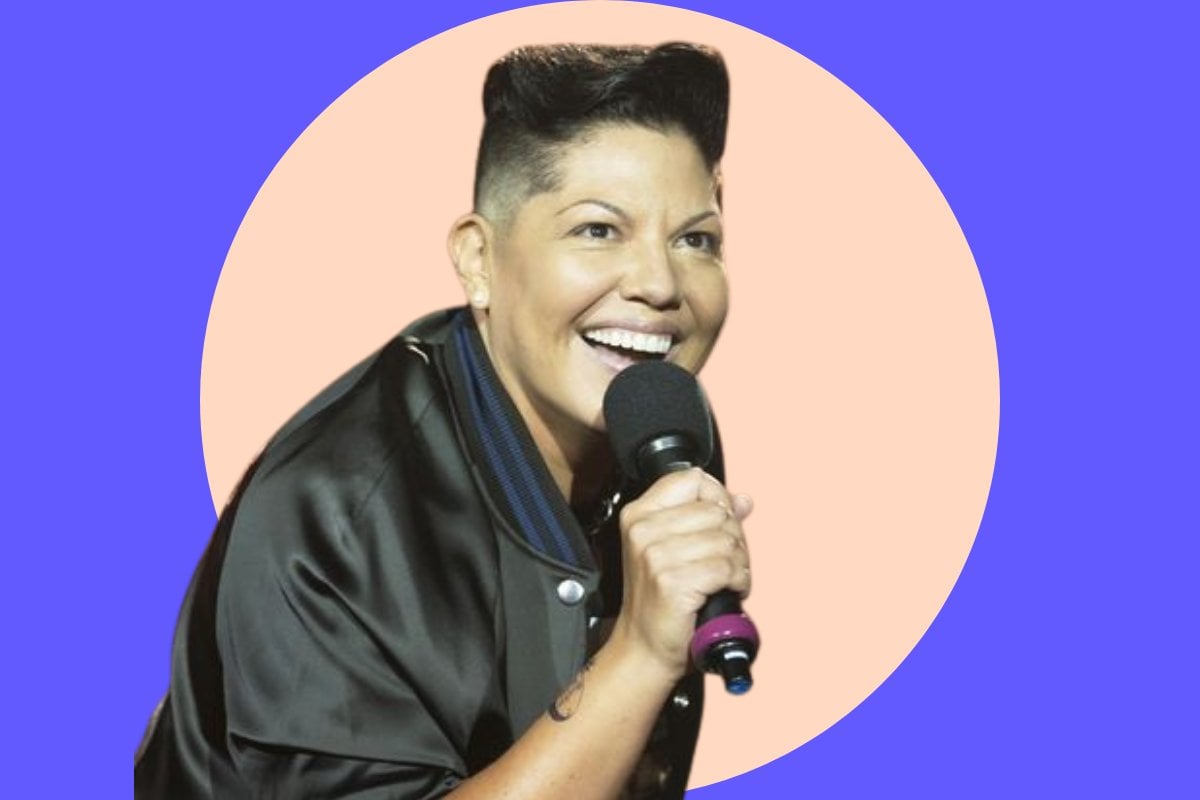 They were just one of a few new characters introduced in the Sex and the City reboot, And Just Like That.

At first we didn't pay a huge amount of attention to them as we were distracted by Brady having loud 'ride me like a cowboy' sex while his parents ate ice cream and chia seeds mere metres away.

But soon Che Diaz and their 'woke moment button' infiltrated our combined consciousness. We couldn't escape them. They were everywhere. And they were always vaping weed.

Over the course of a few episodes, they quickly became one of the most polarising TV characters of all time. While it was a great step forward to see a non-binary character join the cast of a show that once exclusively told the stories of very specific straight white women, this character didn't seem to land with the audience.

While Che Diaz (yes they will forever be referred to by their full name) was busy pressing both their woke moment button and Miranda Rambo's button, memes and think pieces were flooding the internet.

In some cultures “Hey, It’s Che Diaz” is an informal greeting, while in others it’s a direct threat.

Ah Thursday, time to watch my favourite show How I Met Your Che Diaz 🥰😍

someone fucking help me! Che Diaz is standing outside my window and wont stop pressing their "Woke Moment!" button. It's been 10 hours!!!

Unsurprisingly, people hated the woke moment button. It haunted their dreams. They were confused by the 'comedy concert' that didn't seem to be... funny.

The 'Rambo' thing made us cringe deep down within our souls.

All of this had hardcore fans asking: are we supposed to love or hate Che Diaz?

But I've been asking myself another, possibly far more important, question and that is... Is Che Diaz the new Big?

See, I have a theory.

I think Che Diaz and their woke moment button were brought in not to become our collective sleep paralysis demon but to replace Big and his Big-like energy.

I've come to this conclusion because I've noticed some similarities between the two characters, their storylines and how they interact with the other characters.

Those four similarities are as follows.

Ok, both Big and Che Diaz have some serious BDE (that's Big D**k Energy to those who missed that particular moment in pop culture history).

Like Big, Che Diaz commands attention. They're both tall in stature and have undeniable charisma. They're both alphas, who are used to getting what they want.

No one can deny that Che Diaz and Sara Ramirez, the actor who plays them, are smokin' hot. They've just got... something.

Same with Big. It didn't always make sense but millions of women (up until recently) found that man very attractive.

Twenty years ago, Big was the 90s equivalent of the guy who texts you 'u up' at 3am after you haven't heard from them in four months.

For years, he moved freely in and out of Carrie's life, with very little thought about what she was up to in the periods in between. And what Carrie was doing in those periods was being... obsessed with Big.

Similarly, Miranda quickly became obsessed with Che Diaz after watching their 'comedy concert', while Miranda was just someone on their periphery. A curiosity.

Thirdly, the way Miranda is obsessing over Che Diaz, and acting like a giggly teenager with a crush, is exactly how Carrie acted with Big for the first few years of their relationship.

It's jarring to watch now, but this is what we watched for ALMOST SIX SEASONS.

4. They both have an oral fixation. 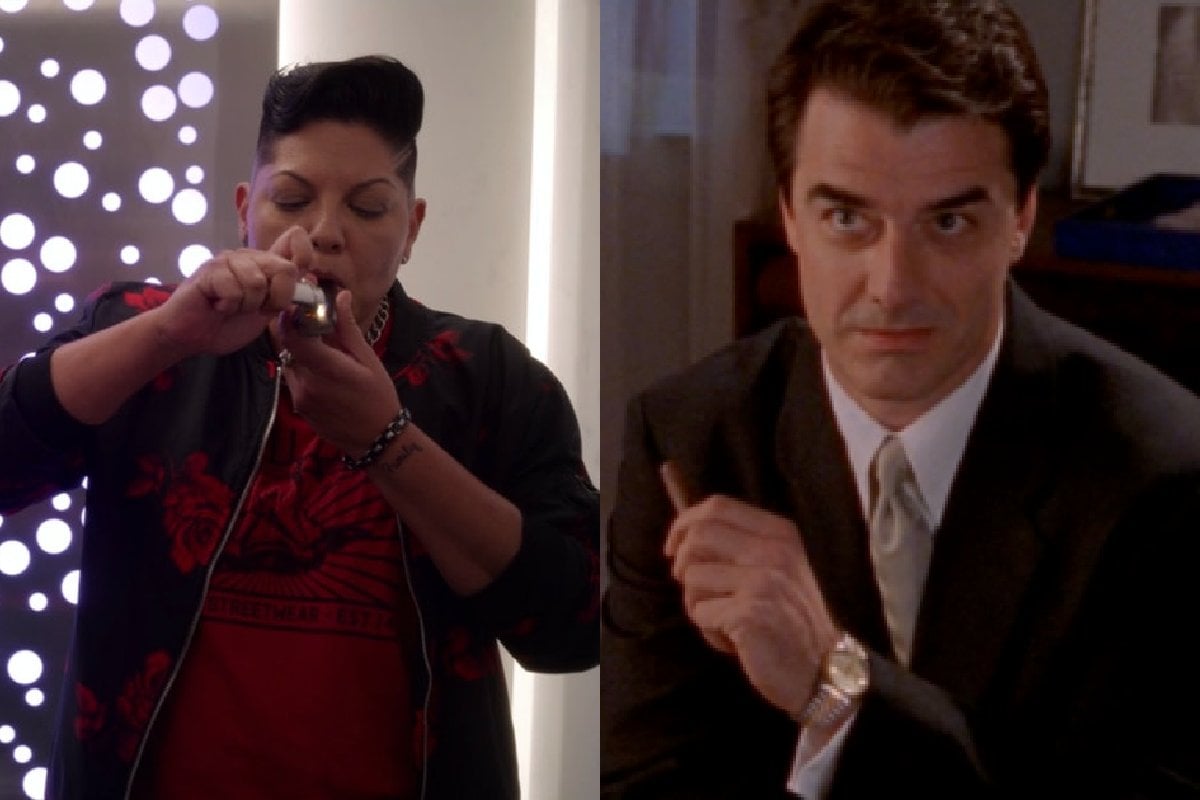 For my fourth and final point, I would like to present a very important observation...

Throughout the original series, Big would just materialise out of nowhere, cigar in hand, and Carrie would become obsessed with him. Che Diaz disappeared for months after The Great Kitchen Sexual Awakening and then turned up at the fundraising night, vape in hand.

Is this a clue as to the link between the two characters or have I too been smoking a lot of weed?

In conclusion, I believe that Che Diaz may be more of a fixture in the reboot than we originally thought.

I think we could watch history repeating itself. Maybe, like with Carrie and Big, we're going to watch Miranda obsess and chase someone who is never fully available to her. Which, I would like to add, would be the complete opposite of what she experienced with Steve.

And maybe Carrie - and all of us - will learn some lessons from watching this from the sidelines?

Reply
Upvote
3 upvotes
That's a pretty depressing thesis, if you think about the implications that means for the character of Miranda. Once an insightful independent, educated woman, she's regressed into an idiotic scatterbrained individual who can't think or reason because of her latest romantic obsession. Her morals have gone out the window (remember how upset she was when her partner cheated on her?) in the woke name of "self-discovery". Getting older is meant to be about getting wiser. She's essentially done the opposite, and is behaving like someone with the life experience and maturity of a (very insecure) twenty-something.
Resources
Very Peri
Skin
News
General
Opinion
True Crime
Politics
Sport
Explainer
Entertainment
Celebrity
Reality TV
Movies
TV
Books
Rogue
Royal
Lifestyle
Beauty
Fashion
Weddings
Home
Wellness
Health
Fitness
Travel
Food
Family
Before The Bump
Pregnancy
Baby
Kids
Teens
School
Parent Opinion
Work & Money
Money
Finance
Career
Lady Startup