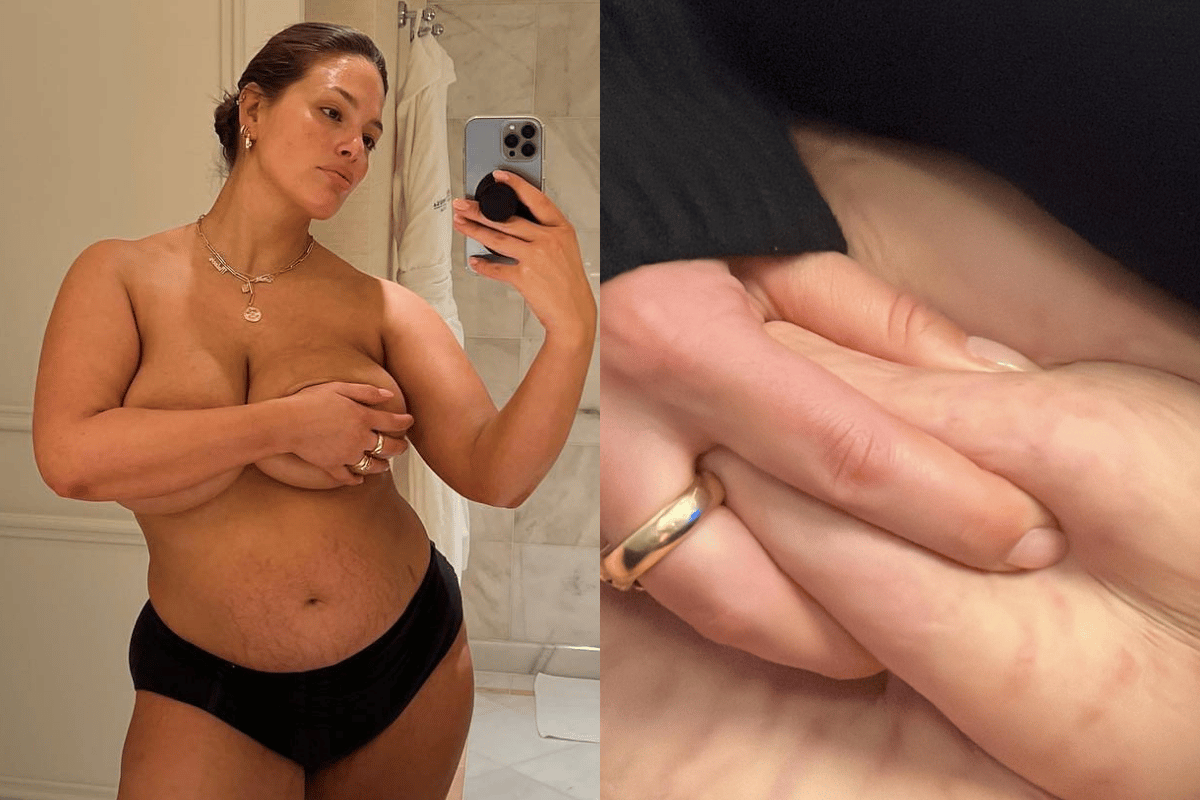 This post deals with postpartum depression and could be triggering for some readers.

New mums often experience complex feelings about their postpartum bodies, which is why Ashley Graham is being celebrated this week for thanking her tummy in a series of unfiltered photos on Instagram.

The model mum of three-month-old twins Malachi and Roman, and two-year-old Isaac, wrote in a short post to her 17.7 million followers, "Hi, new tummy. We've been through a lot. Thank you."

The comments from her celebrity friends and fans applauded her unfiltered and honest approach to her postpartum journey.

"Thank you for this because I'm two months postpartum and seeing how beautiful you look is really empowering for those of us struggling with the way we look," one woman wrote in the comments.

"Thank you for posting the real you. This makes people going through this feel like they are not alone," another wrote.

In January 2020, Ashley spoke about the "BS" expectations of postpartum motherhood.

"Everybody told me if you breastfeed, the weight falls off," Ashley said in an interview with Parents. "Well, that was BS. And I'm still working on like 20 pounds.

"When I say working on, I just kind of look at it every day like, 'Hello, new body,'" she corrected herself. "And that's just kind of how I go on with it."

She also opened up about another unexpected side effect of postpartum - hair loss.

"I think it was like around four months, my whole hairline fell out," Ashley shared.

"And that was more traumatic than even birth because I was like, 'My hair's falling out in clumps - what am I doing?' Then I realised it's actually a thing," she said.

Postpartum recovery is hugely varied from mum to mum.

From experiencing severe hair loss, to dealing with postpartum depression, here's what five other celebrities have shared about the reality of postpartum recovery.

Six weeks after the birth of her second child, Kylie Jenner opened up about her postpartum recovery.

"I just want to say to my postpartum mums that postpartum has not been easy," Jenner shared on her Instagram Stories.

"It’s very hard. This experience for me, personally, has been a little harder than with my daughter," she continued.

Kylie added that she didn't want to get back to life as normal without sharing that she's been struggling.

"I didn’t want to just get back to life without saying that, because I think we can look on the internet, and for other mums going through it right now, we can go on the internet and it might look a lot easier for other people, but it hasn’t been easy for me.

In a 2017 Glamour UK essay, model Chrissy Teigen shared that she experienced severe postpartum depression after the birth of her daughter Luna in 2016.

"Most days were spent on the exact same spot on the couch and rarely would I muster up the energy to make it upstairs for bed," she wrote.

"John would sleep on the couch with me, sometimes four nights in a row. I started keeping robes and comfy clothes in the pantry so I wouldn't have to go upstairs when John went to work. There was a lot of spontaneous crying."

Later, in an interview with Refinery29, Teigen shared that she struggled to see the other side of her dark period.

"When I was in the midst of everything, I could never imagine myself on the other side of it. Now, I’m able to look at September, October, November, December, and shake my head at how dark and crazy of a period it was.

"Unfortunately, you can only really do that when you’re out of it. There’s no other way to explain it. And there’s no better feeling than being out of it.

"Of course, you have your good and bad days. I just had a bad day a couple days ago. But the bad days do not outweigh the good days anymore. Just when you think it’s really, really bad, it’s going to get better."

Talking to Vanity Fair in 2016, Adele spoke about experiencing postpartum depression after she had her son in 2012.

"I didn't talk to anyone about it. I was very reluctant," she said.

It was only when she opened up to a friend that she felt a weight off her shoulders.

"One day I said to a friend, 'I f**king hate this' and she just burst into tears and said, 'I f**king hate this too.' And it was done. It lifted. My knowledge of postpartum - or postnatal, as we call it in England - is that you don't want to be with your child; you're worried you might hurt your child; you're worried you weren't doing a good job. But I was obsessed with my child. I felt very inadequate; I felt like I'd made the worst decision of my life," she said.

"It can come in many different forms. Eventually I just said, 'I'm going to give myself an afternoon a week, just to do whatever the f**k I want without my baby.' A friend of mine said, 'Really? Don't you feel bad?' I said, 'I do, but not as bad as I'd feel if I didn't do it.'

"Four of my friends felt the same way I did, and everyone was too embarrassed to talk about it; they thought everyone would think they were a bad mum, and it's not the case. It makes you a better mum if you give yourself a better time."

After a traumatic birth in 2017 with her first daughter Olympia, Serena Williams had a long and arduous postpartum recovery that tested the tennis players in ways she could never imagine.

After being left bedridden for six weeks post-birth, Serena said her negative attitude reminded her of how she sometimes felt on the court.

"Sometimes I get really down and feel like, 'Man, I can’t do this,'" she told Vogue at the time.

"It’s that same negative attitude I have on the court sometimes. I guess that’s just who I am.

"No one talks about the low moments - the pressure you feel, the incredible letdown every time you hear the baby cry. I’ve broken down I don’t know how many times. Or I’ll get angry about the crying, then sad about being angry, and then guilty, like, 'Why do I feel so sad when I have a beautiful baby?' The emotions are insane."

After the birth of her third child, Alanis Morissette shared that she has experienced postpartum depression with every child, each instance worse than the previous.

In October 2019, Morissette shared a personal essay on her website about postpartum depression, writing, "I have been here before. I know there is another side. And the other side is greater than my PPD-riddled-temporarily-adjusted-brain could have ever imagined: as a mum, as an artist, as a wife, as a friend, as a collaborator, as a leader, as a boss, as an activist. I saw how things got richer after I came through it the last two times... I knew better, so I set it up to win as much as I could beforehand. Support. Food. Friends. Sun. Bio-identical hormones and SSRIs at the ready... but for all this preparation, PPD is still a sneaky monkey with a machete - working its way through my psyche and body and days and thoughts and bloodwork levels."

She concluded: "Wouldn't it be cool if we treated all postpartum mums and families with this awareness and honour. Even if the treadmill of the quickening of our culture didn’t change pace that there might be a life raft of empathy toward the feminine life-givers who bear it all and give more than words can even begin to touch on. We’re not alone."

This story was originally published on Mamamia on March 19, 2022, and updated with new information on April 27, 2022.