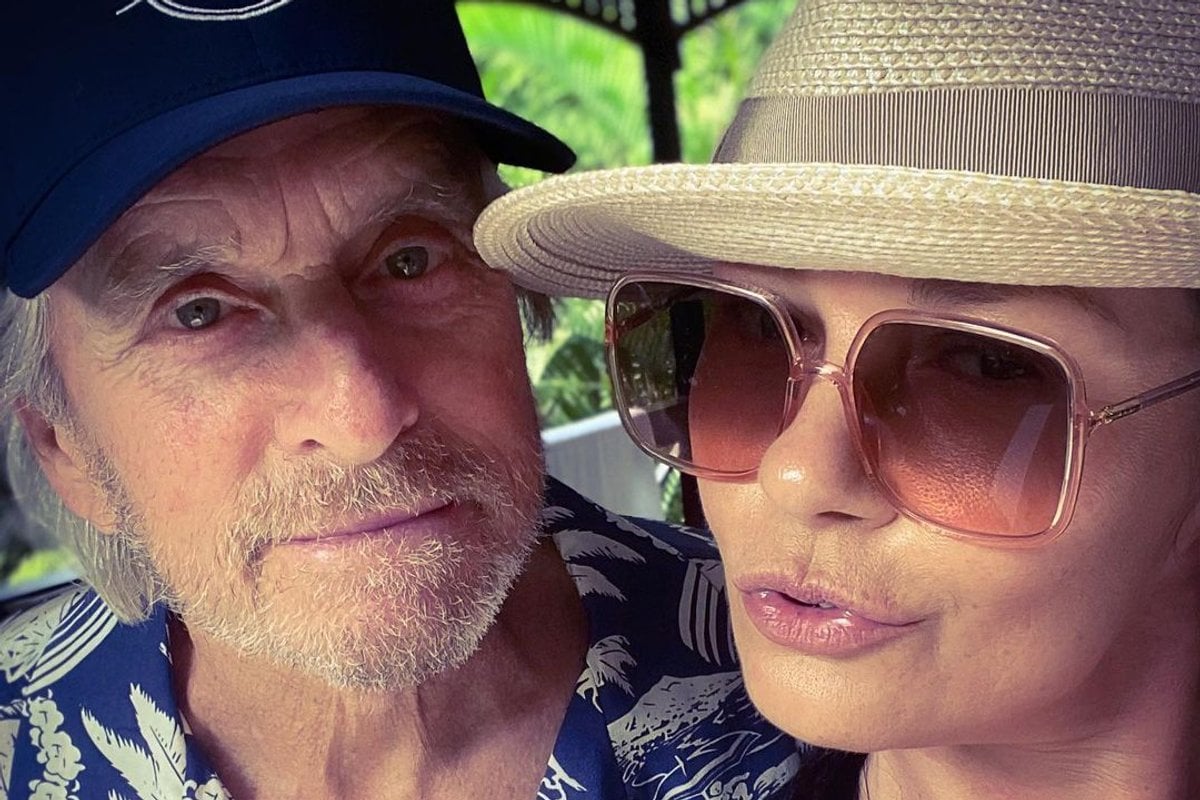 Catherine Zeta-Jones and Michael Douglas are one of Hollywood's rare success stories. They have been married for 20 years and share two children.

The two respective actors were attending the Deauville Film Festival; Douglas was promoting his film A Perfect Murder, while Zeta-Jones was promoting her movie The Mask of Zorro. They were introduced by mutual friends, Antonio Banderas and Melanie Griffith.

Meeting my husband for the first time at the Deauville Film Festival. Can’t remember what he was talking about😂

"I looked at her, and I said, 'Catherine, I’m going to be the father of your children,'" Douglas told The Hollywood Reporter in 2019.

Two years later, he was.

After meeting on November 18, 2000, Douglas and Zeta-Jone's friendship quickly grew.

"Nine months later, I'm still having long conversations with him on the phone, having great dinner dates, constantly wondering, 'Why are we not together?'" Zeta-Jones told Larry King in a 2001 television interview.

But before they took the next step, many people had questions about their 25-year age gap.

"Historically, older men and younger women have been together," Zeta-Jones said.

"When my mother was telling me about men and telling me the facts of life, she never actually put an age bracket on it. And it's so funny, because Michael and my parents are the same age. So, my parents, whenever they see us together, never even question that there was a 25-year age difference."

Then, on New Year's Eve in 1999, when they were both down with the flu in Aspen, Colorado, Douglas proposed with an antique 10-carat Fred Leighton diamond ring that was estimated to be worth $1 million USD. 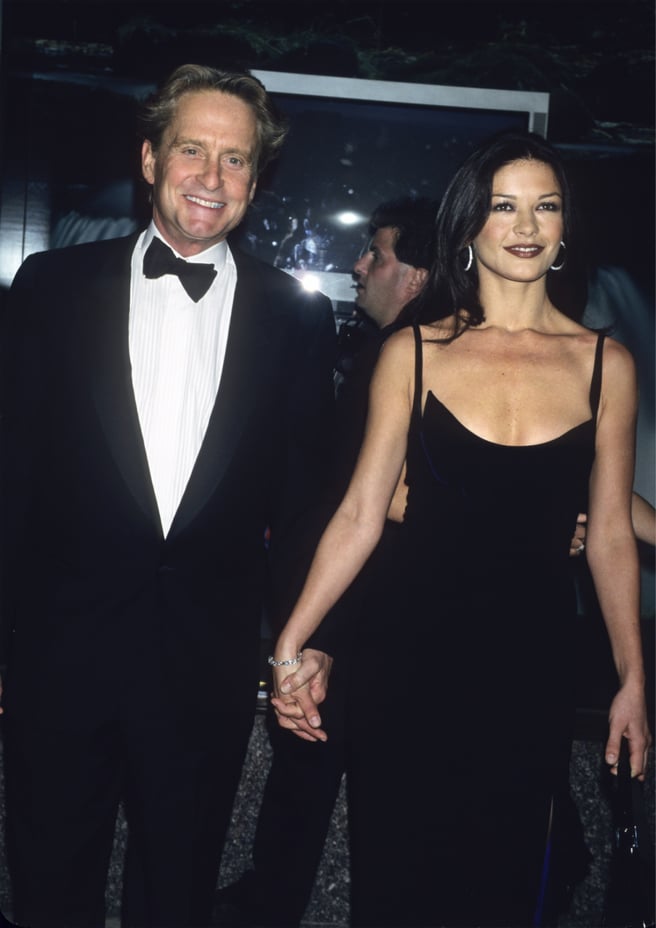 At the same time, tabloids got wind that Zeta-Jones was pregnant with their first child.

"We obviously were hoping to hang onto this information a little longer than expected but, yep, Catherine's expecting," Douglas announced to People. "Both of us couldn't be happier."

The following year in August 2000, their first child, Dylan Michael was born. This was Zeta Jone's first child, and it was Douglas' second. His son Cameron, who was born in 1978, is from his first marriage to Diandra Luker.

A few months later, on November 18, 2000, the couple married at the Plaza Hotel in New York.

Instead of going on a honeymoon, the couple opted for a staycation in their apartment with their four-month-old son.

"It doesn't get any better than this; 2000 is not going to be a year that's forgotten," Douglas told Reuters a month after the wedding. 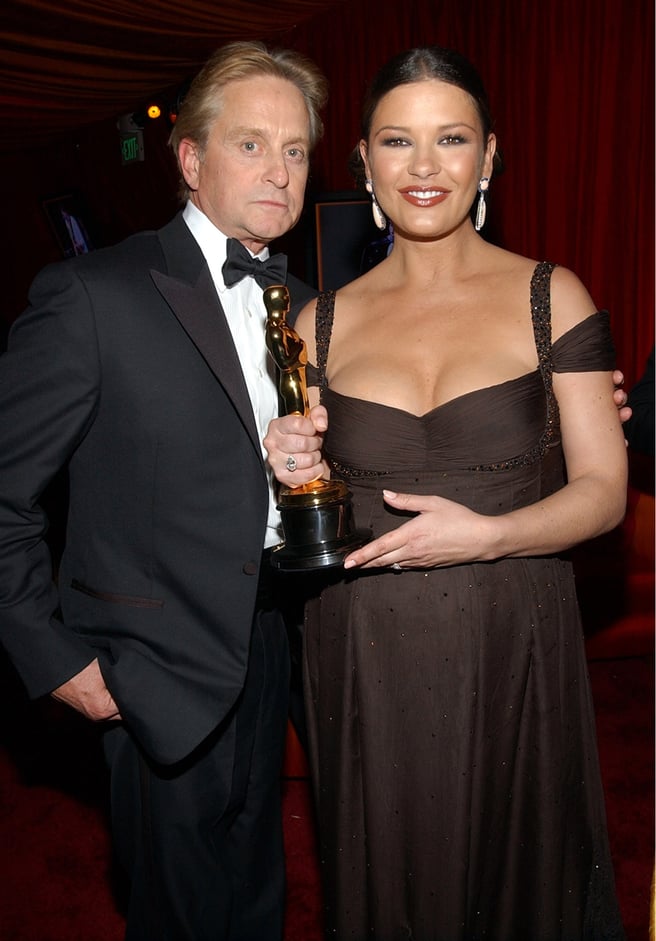 Pregnant with their second child in March 2003. Image: Getty.

For the next six years, the family of four lived in the tropical paradise of Bermuda in their three-acre English-style compound.

"There's real solace in returning to this tiny island where I have so many relatives, probably 70, in one place. To me, Bermuda is a real family spot." Douglas told Architectural Digest in 2002.

"We were looking for a country place, when suddenly I said, 'Wait a minute. By plane, Bermuda’s just 90 minutes from New York—less time than it takes to get to the Hamptons,'" recalled Douglas. 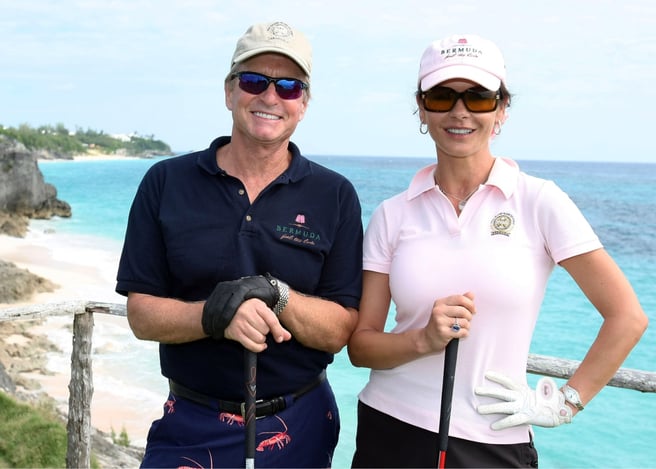 By 2009, the family were living back in the United States in Bedford, New York. And although this made things easier for Zeta-Jones and Douglas, living in the spotlight, surrounded by paparazzi took a real toll on the kids.

"I hated it," Carys told Town and Country. "I used to get really upset. They would jump on the subway and sit right in front of me. I was, like, six. I was confused."

In August 2010, following many months of oral discomfort, Douglas was diagnosed with stage four throat cancer. Although this cancer is usually terminal, shortly after his diagnosis, Douglas underwent eight weeks of intensive chemotherapy. Because of it, he lost 20kg and became incredibly weak.

"That's a rough ride. That can really take it out of you. Plus the amount of chemo I was getting, it zaps all the good stuff too. It made me very weak," he told The Guardian.

If that period wasn't stressful enough, at the same time as the cancer diagnosis, Douglas' firstborn, Cameron, was arrested and charged with possession of heroin and distribution of methamphetamines and cocaine. He served seven years.

And although the public shamed Douglas as a terrible father, he said that prison would be the best thing for him.

"He was going to be dead or somebody was gonna kill him. I think he has a chance to start a new life, and he knows that," he shared. 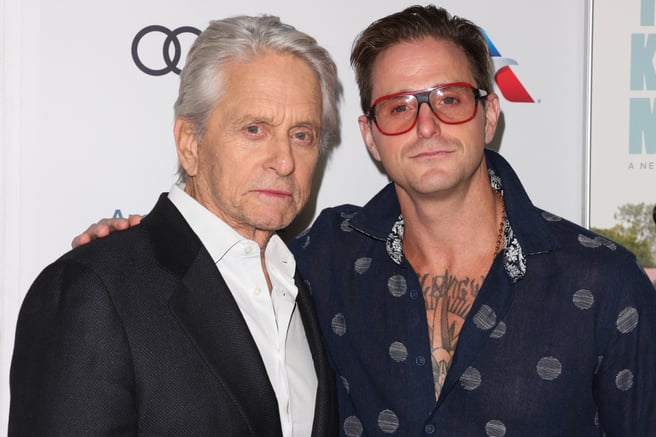 Michael Douglas and his son Cameron in 2018. Image: Getty.

In January 2011, less than a year after his son's sentencing, Douglas was declared cancer-free. But things continued to prove difficult.

"After dealing with the stress of the past year, Catherine made the decision to check into a mental health facility for a brief stay to treat her bipolar II disorder," her publicist said in a public statement.

Speaking about her condition, Zeta-Jones told the UK Telegraph, "[Bipolar] is something I have been dealing with for a long time".

"When you get sideswiped like that [Douglas’ cancer] it’s an obvious trigger for your balance to be a little bit off – not sleeping, worry, stress. It’s a classic trigger."

In April 2013, Zeta-Jones scheduled a second round of treatment to stay on top of the disorder. Only a few months later, it was announced that she and Douglas had quietly separated.

But after one year apart, the two reconciled in 2014.

Nowadays, the couple focus on their communication and their children.

"Both Michael and I have a very open relationship. When you have kids that didn't ask to be born into a world where it's scrutinised or looked into, you've got to be open and honest and share things that, probably, people at the drugstore wouldn't share over the counter," Zeta-Jones told W Magazine.

In 2018, when Douglas was accused of sexual misconduct by a former employee - which he immediately shut down as false - his wife stood by his side.

Speaking to Entertainment Tonight, Zeta-Jones clarified where both she and her husband stand on the issue of sexual harassment in the workplace.

“My reaction was that as two people who have been in this business – him longer than me — was that we support Me Too and the movement more than anybody, anybody – me as a woman, him as a man,” she said.

“There was no other way than to be preemptive in a story that had to be watched. He did a statement, he did it. I think it’s very clear the way that he stands. I cannot elaborate on something that’s so very personal to him.”

Douglas is now 76, Zeta-Jones is 51, and their children are 20 and 17. Both Carys and Dylan want to enter the entertainment industry like their parents.

"Michael and I would be the first to say, 'Maybe we should think about being a lawyer or something else.' But they really got it and what I love about it so much is that they get it. They love the craft."

Zeta-Jones also shared that both kids have been interested in acting for many years now, so it's no surprise that's the career they want to pursue.

"They’ve been to summer camps since they were seven years old and we’ve seen every production they’ve ever been in and Dylan actually at college has done two student films and acting is a real passion," she told the publication.

Plus, with two successful actor parents and grandparents, they know what it will take to make it.

"So there’s always going to be something that you have to prove probably more than others, not necessarily you have a foot in the door," she said.

In November 2020, Zeta-Jones and Douglas celebrated their 20th wedding anniversary.

This week, Zeta-Jones shared the secrets to their successful marriage.

"First of all, we have a lot of fun together," she told WSJ Magazine. "My husband is 25 years older than me; that's not a secret... The constant is love and respect. We've never, ever lost our sense of humour, and we enjoy each other's company."

She added: "My husband and I spend a lot of time together because, unlike so many couples, we've never had a nine to five job where it's consistent. We're either on or we're off. I'm really working 16 hours a day, or I'm not. He's doing the same, or not. So we've had in our relationship huge amounts of time where we've been just us."