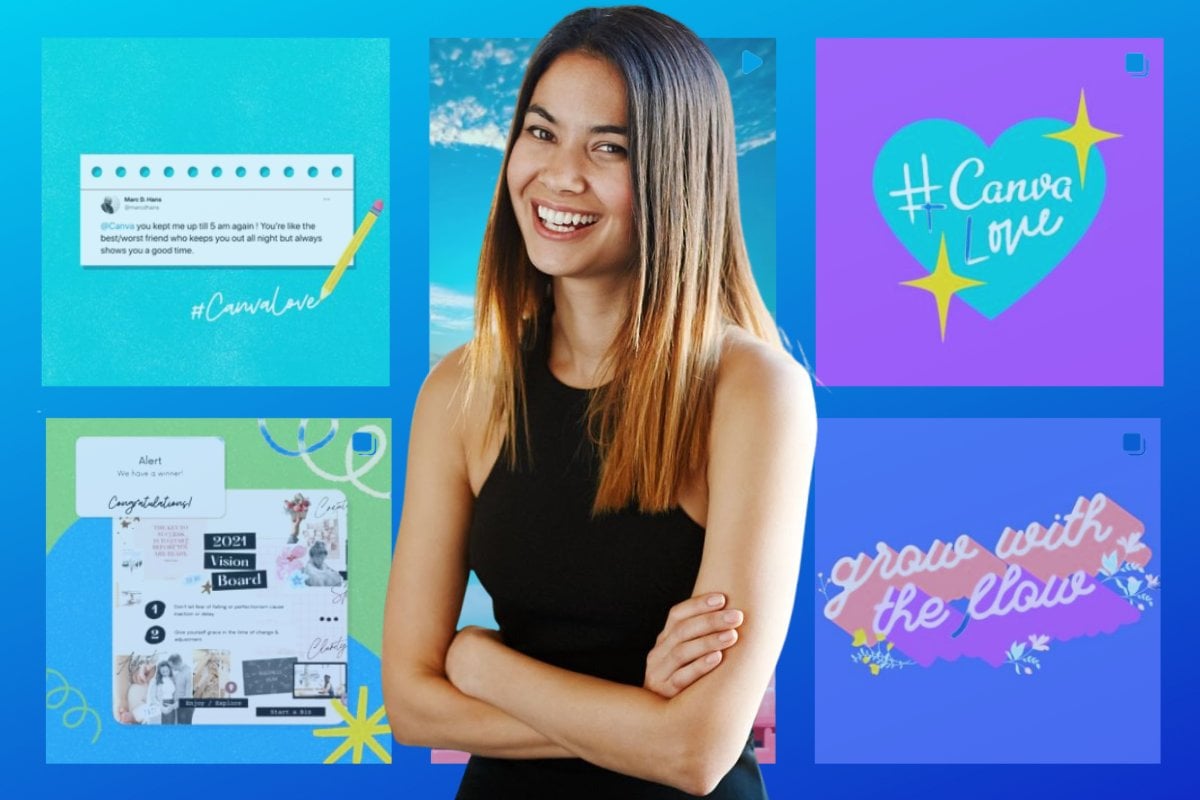 It's difficult to put into words the dizzying heights of success that Canva co-founder and CEO Melanie Perkins has reached.

So let's put it into numbers instead: Canva is only 10 years old and is already worth 55 billion dollars. That supersedes most of the biggest firms here in Australia, including Telstra.

According to the Financial Review, Canva is clocking in at close to one billion dollars in pure revenue annually. They have 60 million active users monthly, with five million subscribers to their premium platform Canva Pro. They have 2,500 employees across 17 countries, and by the end of this year that number will be closer to 4,000.

The Australian has just listed Perkins, who is only 34 years old, as part of the Top 10 richest people in the country along with her husband, co-founder and COO Cliff Obrecht. That makes her the second richest woman in Australia.

The couple are worth 15.89 billion dollars.

Those are some pretty impressive numbers.

But perhaps most impressive is the cost of Perkins's engagement ring: $30.

Listen to Melanie Perkins on Lady Startup Stories below. Post continues after.

Despite their wealth, both Perkins and Obrecht believe in giving back. Together with their third investor and CPO Cameron Adams, they are committed to giving away most of their money to charity.

They've signed Warren Buffett's and Bill Gates's The Giving Pledge, which is a promise "by the world's wealthiest individuals and families to dedicate the majority of their wealth to charitable causes."

For Perkins, creating Canva has never been about money. She had the idea for the design platform back in 2007 when she was teaching students how to use traditional design tools and software and saw how difficult and expensive the software was to use.

Initially, she and Obrecht focused on school yearbook design, calling their product "Fusion Books". They operated out of Perkins's mother's living room and would print the books out on a massive printer.

After getting investor Bill Tai on board after a meeting with him in Silicon Valley, she also sparked interest from the co-founder of Google Maps, Lars Rasmussen. Rasmussen brought Adams into the team.

The group set about developing Canva and gathering investors and finally launched in 2013. Perkins admits the intervening years were difficult.

"The first time I went to Silicon Valley, my brother was actually studying over there. So I slept in his living room, on the floor, and was just going to every single thing I possibly could," she told Mamamia's Lady Startup Stories podcast.

A few years ago I wrote a post about some of the lessons we've learned on Canva's journey, I called it Part 1, but never quite got to Part 2! If there's anything you'd like to know more about, let me know and I'll try to include the questions in Part 2!👇https://t.co/RNnrzcVwTT

Despite the numerous rejections, Perkins forged on and slowly the investors started backing the product. They spent a year after launching in 2013 to really enhance the design tool. "It does move really fast, but at the same time we took time on the things that needed to take time," she said.

Being an entrepreneur is challenging, especially when there are investors who have put in thousands of dollars into your company. Yet it wasn't the investors who pushed Perkins - it was her own self.

"I have to say, I'm very hard on myself," she said. "I have much higher standards of myself than anyone else could possibly have of me. I think even in the Fusion days, there was equal amounts of pressure then than is now. I would be surprised if people could have a higher standard."

Perkins maintains a hands-on approach to the product, even now. Each year the platform becomes more and more user-friendly, ultimately making anyone and everyone a designer.

"We are well on the way to being one of the most valuable companies in the world. We want every single person on the planet to use Canva," Perkins has told her staff.

According to the Financial Review, she is described as "intense", "grounded", and "complicated". Many call her a "visionary". Given how successful the business is after a mere 10 years, "visionary" is certainly an apt description.

Looking back on it all, Perkins doesn't hold any regrets. "Every mistake is a really helpful learning. Maybe I would have been a little less hard on myself. Maybe the first pitch would not have been quite so embarrassing. But I think if you changed any one of these things, you wouldn't have had a very important learning."

And for all the budding dreamers out there, Perkins's advice is simple. "I think it's really important to think about the future you want," she said. "And then take that first tiny, little step. Don't be afraid to take that step. It's so critical to just get started."