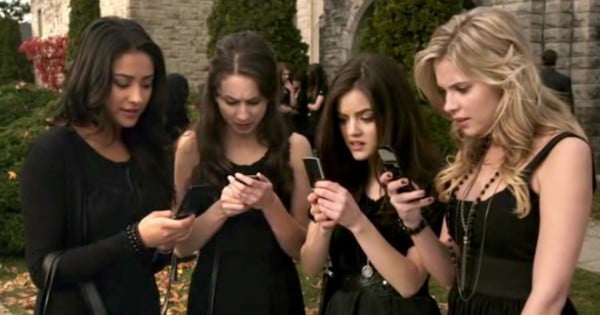 Hey Zuckerberg – thanks for the Facebook memories. No really, thanks so much for bringing me a daily cringe-worthy slideshow of all my humiliating thoughts and feelings from the last ten years.

Since Facebook introduced the On This Day feature last year, I’ve been living in a virtual This Is Your Life nightmare on repeat.

It’s been like a show ride of embarrassing moments that I can’t stop and I can’t get off and honestly, sometimes, I don’t know whether I want to stop it and get off? Which is a really confusing. (See what you’ve done to me, Zuckers?)

I joined Facebook in 2006 when no one knew that this whole social networking thing was going to take off. And we weren't yet curating our perfect social media personas.

Which means everything we posted was real – like natural eyebrows and no duck face real.

So now that Facey is serving me up some fresh memories every day, I get to look back and cringe at my mid-twenties late night existential questions and my late twenties attempts at trying to Eat, Pray, Love myself from my lounge room.

Did I really need to know that the 25-year-old me announced at 2am one morning – ‘My head hurts, but my heart hurts more’?

And thanks to Facebook memories, I can’t forget that stage in my late 20’s where I thought plastering my Facebook wall with inspirational quotes was bringing me that much closer to Oprah status.

I was sure that reminding all my Facebook friends to ‘don’t cry because it’s over, smile because it happened’ and ‘throw kindness around like confetti’ was really bloody helpful and poignant.

I was making a positive impact on their lives – one inspirational meme at a time. In reality, they were probably rolling their eyes and blocking me from their newsfeed.

And then there’s all the public declarations that I never lived up to. All the ‘2009 is my year, amazing things are going to happen – stay tuned!’ – and then nothing much happened. Awkies.

Yes, I know what you’re thinking – why didn’t I just turn the bloody feature off?

Partly because I’m a human, maybe a bit of a masochist and this was morbid curiosity at its best.

And, partly because during one of my many trips down memory lane – I discovered you can delete those little memory fuckers! Bye drunken status updates, see ya later inspirational quotes!

So every day when I received that ‘You have memories to look back on today’ notification, I smugly headed over to Facebook, index finger primed for deleting. Day by day I began to delete every little Facebook memory that made me shudder. Every double-chinned, shiny-faced photo. Every questionable status update.

But lately I’ve been thinking – maybe it’s not so bad having access to a database of my most embarrassing moments. And if I’m deleting all my Facebook memories, am I deleting some of the most authentic parts of myself?

Of course, we have no problem deleting the creepy messages we find in our Facebook 'other' folder. Post continues after video.


All of those posts, as cringe-worthy as they are, were just the younger versions of myself navigating the world, both on and offline – in a really candid, early social media era way.

I still thank the social media gods every day that Facebook and its mates didn't exist in my high school and uni days (no one needed to see the results my love affair with Passion Pop) but I think I need to be a little kinder to the younger me and maybe even take a few cues from her from time to time.

Because whose heart hasn't hurt more than their head at some point in their life?

After all, younger me had no idea that this social media thing was going to stick, in the same way she had no idea she was flashing everyone her butt crack in those hipster jeans.

So Zuckerberg, I’m calling a truce – for now.

Is there a way to block everyone else's memories too? My feed seems to be full of them, and honestly, they weren't that exciting the first time around...

I don't think you can block them. I think the only thing you can do is go to the top right hand corner of the post where the drop down arrow is and it should say I don't want to see this post, or something like that.