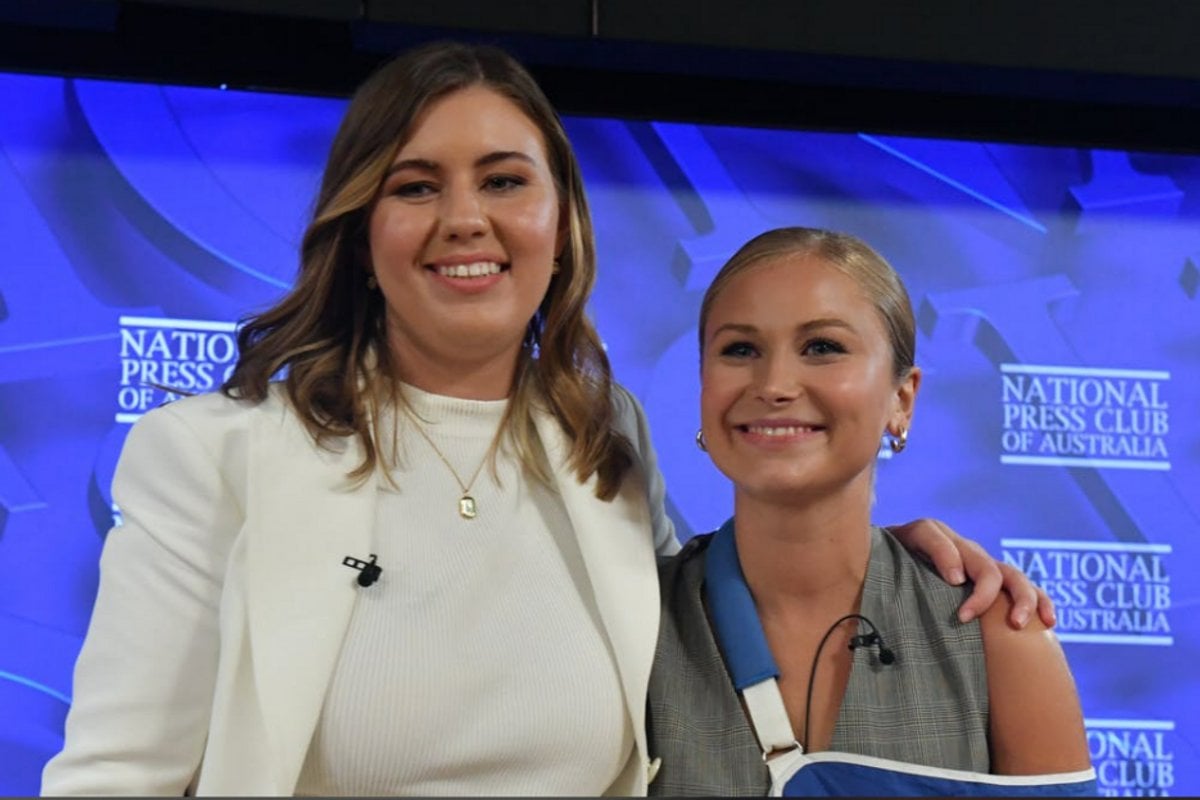 As an historian of the Australian women’s movement, the past two years have been extraordinary to witness.

Not only are we living through a once-in-a-century pandemic, which has had profoundly gendered effects, we have also experienced a feminist insurgency that has placed the issue of women’s safety, and men’s abuses of power, at the centre of our national conversation.

While many activists, journalists and advocates contributed to this insurgency, it exploded largely thanks to two young women: 2021 Australian of the Year Grace Tame and former parliamentary staffer Brittany Higgins.

Both just 26, both survivors of sexual assault, both abused by men – and institutions – they ought to have been able to trust. Both rejected the expectation they should be shamed into silence about their experiences. In doing so, they have helped to rewrite enduring cultural scripts about sexual abuse and sexual assault.

Their joint address at the National Press Club today was a valedictory speech, a way to mark their extraordinary year in the public eye. But it was also a call to action, a warning against complacency in an election year.

Both made it very clear that, while hearing the voices of survivors of abuse and assault is important, it is not enough. As Higgins noted, the ways we discuss abuse are far too passive,

as if sexual violence falls out of the sky. As if it is perpetrated by no-one.

Of yesterday’s formal parliamentary apology to victims of alleged sexual harassment, assault and bullying, Higgins was grateful, but sceptical:

They are still only words. Actions are what matter.

Tame and Higgins both made passionate pleas for structural change, for measurable action to prevent sexual abuse and assault.

Tame called for government to take abuse seriously: to advance consistent national legislative change on sexual offences, and to spend more on preventive education to curb Australia’s alarmingly high rates of abuse and assault. She calculated the government spends 11 cents per student per year on prevention education, because

we currently have a government that is primarily concerned with short-sighted, votes-based funding, not with long-term, needs-based funding.

To those of us used to government by spin, obfuscation and photo ops in high-vis vests, Tame and Higgins’ moral clarity and bluntness are exhilarating.

Both vehemently ruled out the possibility of political careers and, indeed, the journalists asking them about their political aspirations seem to misread their social and political role.

They are advocates and activists, who use their public platform to articulate complex issues in clear, direct ways. Tame, in particular, clearly has no intention of playing by anyone else’s rules, as her memorable side-eye to the prime minister at The Lodge demonstrated.

Their speeches also confirmed that their actions had rattled the Morrison government, whose response to them has been ham-fisted at every turn.

Tame revealed that in August 2021 a representative of a government-funded organisation (which she declined to name) had asked for her “word” that she would not say anything about the prime minister on the evening before the 2022 Australian of the Year awards.

“You are an influential person. He will have a fear,” she was told. She speculated he had “a fear he might lose his position, or, more to the point, his power”. The prime minister’s office later said it had no knowledge of such a call to Tame and the person who made it should apologise.

Tame also reminded us the Department of Prime Minister and Cabinet conducted a review of the selection process for Australian of the Year not long after she won the award.

This was an attempt at intimidation, as Tame notes, but it also spoke to the government’s dislike of her fearless critique.

Higgins was consistently treated by many in the Morrison government as a political problem to be managed. In the wake of her allegations, the prime minister commissioned not one, not two, but four reviews, all the while dragging his heels on a formal response to Kate Jenkins’s landmark [email protected] report.

Higgins reminded us that implementing [email protected], especially the proposed “positive duty” on employers to provide a safe workplace, would have

impacted every single working woman in the country. And we just kind of let that moment slide by without thinking.

Tame and Higgins dissected the government’s performance on gender over the past year.

Tame called out Christian Porter’s reliance on a blind trust to fund his unsuccessful defamation case against the ABC. Higgins eviscerated the government’s National Plan to End Violence Against Women and Children for its “vague and lofty” aims, its lack of targets and clear plans. She noted the shocking statistics on domestic violence that

you’ve heard […] rattled off at white-ribbon breakfasts […] They should spur us to do whatever it takes. But instead they’ve become a sort of throat-clearing exercise that we all just kind of tolerate.

Policy action on abuse and assault has been a litmus test for the Morrison government’s views on women. According to Higgins and Tame, it is a test the government has failed at every turn.

In the 1970s, feminist activists told personal stories in public because of their belief that “the personal is political”. Yet victims of sexual assault or abuse typically remained anonymous, because of the shame that was attached to these crimes.

More recently, advocates like Rosie Batty, and now young women including Grace Tame and Brittany Higgins, have personalised these difficult issues, making them harder for politicians to ignore. The #MeToo and #LetHerSpeak movements have centred on survivors and focused on hearing their stories. As Tame said in her NPC address:

How beautiful is freedom of speech? I haven’t always had it.

One of the problems with a movement based on storytelling in public spaces is the brutal toll it exacts on survivors.

Tame noted she had spent the past year being “revictimised, commodified, objectified, sensationalised, legitimised [and] gaslit”.

As Tarana Burke has pointed out, survivors “shouldn’t have to perform our pain over and over again for the sake of your awareness”.

There are other problems with placing too much emphasis on individuals like Tame or Higgins: two young white women can hardly represent all assault survivors, as Shakira Hussein and others have pointed out.

And we must be careful not to confuse justice for individuals with broader structural changes to protect all people from abuse and harassment.

But by speaking truth to power, Higgins and Tame have reinvigorated feminism for a new generation of young women.

Back in the 1990s, older feminists worried young women were not taking up the feminist mantle. No-one is saying that now. Teenage girls know Grace Tame’s name, and they admire her courage and her strength.

As Jess Hill and others have noted, the public face of Australian feminism in the 2010s was dominated by “corporate feminism”: seemingly preoccupied with getting more women on boards rather than raising the wages of low-paid female workers in aged care or childcare, for example.

Sexual harassment is still, shockingly, endemic across Australia, and too many people have experienced sexual abuse and assault.

By highlighting this problem – which at its core is about the gendered abuse of power – Tame and Higgins have mobilised a broad constituency of Australian women.

They inspired thousands to march for justice and others to run for political office. Maybe they will play a decisive role in this year’s federal election.

As Tame reminded us:

[our leaders] may either be constructive or destructive. But every single one of them is arguably replaceable.

Reply
Upvote
Well done ladies make some noise use your voice . These men need to RESPECT . Sexual harassment in work places is not on .  Rape assaulting women its disgusting . Put all these men through boot camp
L
laura__palmer 4 months ago