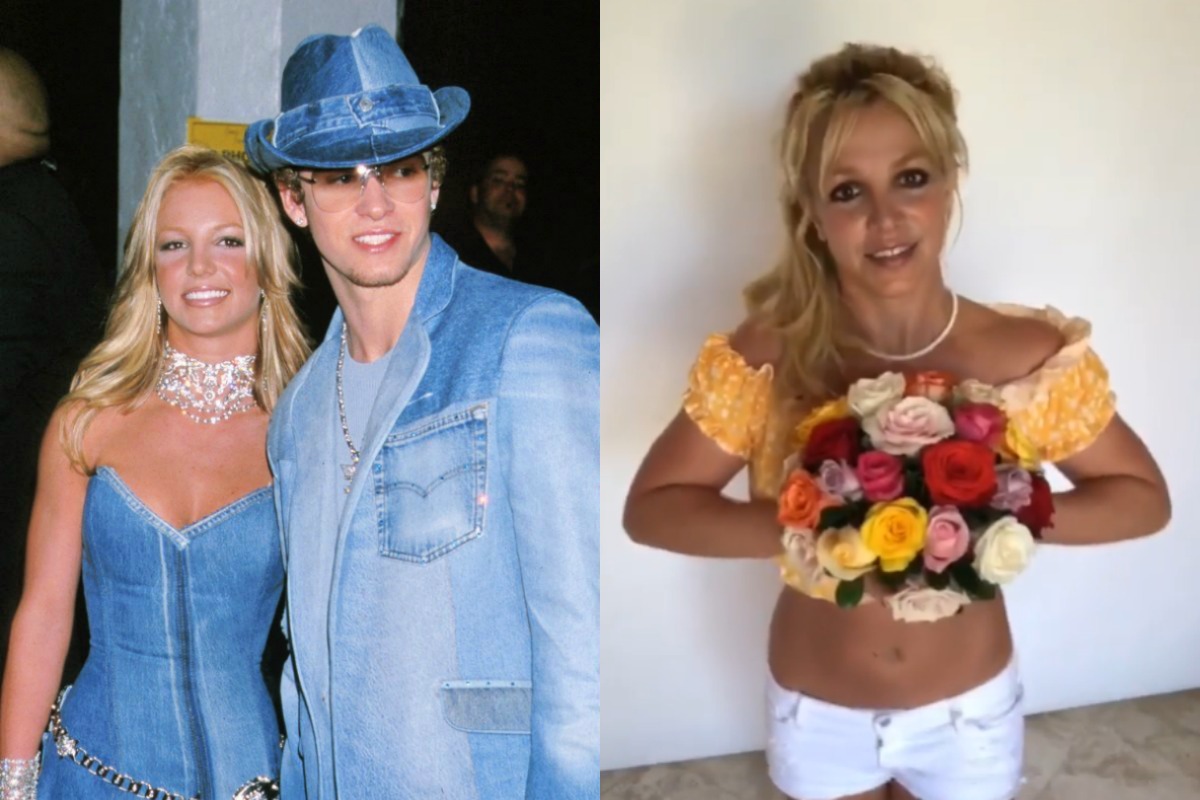 When Britney Spears and Justin Timberlake ended their three-year relationship in 2002, it took the world by surprise.

They were the undisputed King and Queen of pop music who seemed like the perfect match. She, America’s singing sweetheart; he, the frontman of the popular boy band NSYNC.

But behind their individual successes and their iconic double-denim red carpet look that’s cemented in pop culture history, their relationship wasn’t so picture perfect.

WATCH: Here are a bunch of famous people we absolutely forgot dated! Post continues after video.

Eighteen years on, Britney and Justin have reconnected on Instagram. Reconnected is a very loose term to describe what’s happened here.

In April this year, the ‘Baby One More Time’ singer shared a video of herself doing a TikTok dance to her ex’s 2018 song ‘Filthy’.

“This is my version of Snapchat or TikTok or whatever the cool thing you’re supposed to do these days. As you can see I’m not really dancing folks …… I’m just very bored,” Britney, now 38, captioned the video.

In 24 hours, the post was viewed by three million people, including said ex, Justin Timberlake. The 39-year-old even went as far as to comment a bunch of emojis on the post.

Almost nothing sums up the strangeness of 2020 better than the sight of Britney Spears dancing to a Justin Timberlake song in a crop top and low-rise shorts on Instagram, and Justin commenting on it with praise hand emojis.

It also made us nostalgic for the story (and photos) of their relationship, so keep scrolling for a deep dive into the pop star power couple’s romantic rollercoaster relationship.

Britney and Justin met when they were kids in the late 80s. Both starred in The Mickey Mouse Club variety TV show alongside other celebrities including Christina Aguilera, Keri Russell, Ryan Gosling and fellow NSYNC member JC Chasez.

The childhood friends didn't start dating until 1998. Britney was booked as the support act on an NSYNC tour that lasted 18 months, during which time she and Justin started dating.

The double denim moment that made pop culture history.

In the years they dated, both Britney and Justin achieved major career success.

Britney became the best-selling teenage artist of all time with her albums ...Baby One More Time in 1999 and Oops, I Did It Again in 2000. Justin had further hits as the lead vocalist of NSYNC.

Then, in 2001, the couple wore the most famous double denim outfit of all time to the 2001 American Music Awards. The outfit - her sweetheart-neckline denim dress and low-slung belt, and his full denim suit and matching denim fedora hat - has been recreated thousands of times at Halloween and fancy dress parties. Even Katy Perry paid homage to the look at the 2014 MTV VMAs.

Britney and Justin's shock breakup and that revenge song.

Justin and Britney's 2002 breakup was a shock, mostly because the general consensus was they'd get married and have child star prodigy children.

Just before Britney's big screen debut in the vastly underrated film Crossroads (in this writer's opinion), their relationship ended abruptly. There have always been rumours Britney had an affair with choreographer Wade Robson, but neither have ever spoken about it publicly.

What came next was a series of revenge songs neither Justin nor Britney said were revenge songs, but 100 per cent were.

Later that year, Justin released the moody ballad 'Cry Me a River', with such lyrics as:

You don't have to say, what you did
I already know, I found out from him
Now there's just no chance
With you and me
There'll never be
Don't it make you sad about it?

Two years later, Britney replied with her own alleged revenge song 'Everytime' in 2004.

The song had a sadder tone to Justin's, with lyrics referring to her still needing someone and a disturbing film clip.

And in 2006, Justin's song 'What Goes Around … Comes Around' was also allegedly about Britney.

It was... a lot. The song's video was a spectacle starring Scarlett Johansson. And get a load of these lyrics.

Now girl, I remember everything that you claimed
You said that you were moving on now
And maybe I should do the same
Funny thing about that is
I was ready to give you my name
Thought it was me and you, babe
And now, it's all just a shame
And I guess I was wrong

After their breakup, Britney's success continued until her highly-publicised 2007 breakdown. In 2003, she kissed Madonna in the infamous VMAs performance. In 2004, Britney decided to marry Jason Alexander, one of her childhood friends. The couple got hitched at The Little White Wedding Chapel in Las Vegas. Just 55 hours later, Britney got their nuptials annulled.

In 2004, after her relationship with Jason ended, Britney started dating Kevin Federline, who was one of her backup dancers. They got engaged within two months and then married within the year. Their relationship was chronicled in the reality show Britney & Kevin: Chaotic. The couple had two children together and divorced two years later.

“I was going through so much artificial stuff with my kids and Kevin at the time. He’d just left me and I was devastated,” she told MTV in an interview for the 2008 documentary For the Record.

“People thought that it was me going crazy and stuff like that, but people shave their heads all the time. I was going through a lot, but it was just kind of like me going through a little bit of rebellion, or feeling free, or shedding stuff that had happened, you know?”

Britney eventually lost custody of her children and was hospitalised in a psychiatric ward, where she was held for observation. A judge awarded her father control of Britney's personal and financial affairs. The conservatorship is still in place today.

Britney went on to make a career comeback, going back on tour and taking up a successful Las Vegas residency.

But earlier this month, the 38-year-old found herself back in the headlines again when the "Free Britney" movement resurfaced online. For over a decade, fans have speculated that Britney's lack of control over her finances and personal life is leading to another mental health breakdown.

The singer responded by sharing a message to her 25 million Instagram followers.

"This is Me being happy ….. this is Me being authentic and as real as it gets !!!!! I want to inspire people to do the same and just be themselves without pleasing others ….. that’s the key to happiness  !!!!!!" she wrote on Instagram earlier this month.

Since then, Britney has continued to raise concern amongst her legions of fans on social media.

Earlier this month, a TikTok video of Britney walking in and out of frame, posing in a crop top and low-rise shorts, went viral. She claimed the video was to show off her new flowers, though they were only viewable for a few seconds.

Fans also believed her yellow top was a signifier of her distress, as someone had previously commented: “If you need help wear yellow in your next video.” Sure enough, Britney did just that - although it is unclear if this is a mere coincidence.

In the caption of the now-viral video, Britney wrote: “HOLY HOLY CRAP !!!!!! My florist surprised me today by making the flower arrangement all different colors  ….. I was so excited I threw on my favorite yellow shirt and just had to SHARE.”

As for Justin, he found success as a solo artist not long after his breakup with Britney. He also had his own infamous performance - #nipplegate with Janet Jackson at the 2004 Superbowl.

In 2007, he met actress Jessica Biel. Their relationship hasn't been without controversy, with reports of breakups, affairs and reconciliation surfacing every few years.

They got married in 2012 and had their son, Silas, three years later.

Over the weekend, it was reported that the couple secretly welcomed their second child together.

According to the Daily Mail, the 38-year-old actress gave birth to a baby boy and is currently staying in Big Sky, Montana with the rest of the family and Jessica's mother.

However, neither Jessica nor Justin have officially confirmed the news.

The publication also notes that Jessica has not been photographed in public since March and her most recent Instagram photo from her birthday shows her wearing loose clothes. It's believed she would have been about four months pregnant at the time.

Celebrating my birthday in style... and by that I mean, in pajamas. I made Justin PROMISE not to sing Happy Birthday to me, so he improvised. Sorry you can’t hear it, but I’m still laughing ????. Thank you, you wonderful human, for really listening to me, and for throwing my kinda party. And thank YOU ALL for the birthday wishes. Feeling the love.

The reported birth of the couple comes eight months after Timberlake was in the middle of an alleged cheating scandal (which he has vehemently denied) with his Palmer co-star Alisha Wainwright.

In images published by The Sun, Justin was seen on a balcony bar in New Orleans as he laughed with his colleague, seemingly engaged in a flirtatious manner. The publication stated he was not wearing his wedding ring.

Timberlake responded to the rumours in a statement on Instagram.

"I stay away from gossip as much as I can, but for my family, I feel it is important to address recent rumours that are hurting the people I love," he wrote.

"A few weeks ago I displayed a strong lapse in judgment — but let me be clear — nothing happened between me and my costar.

"I drank way too much that night and I regret my behaviour.

"I should have known better."

He continued: "This is not the example I want to set for my son.

“I apologise to my amazing wife and family for putting them through such an embarrassing situation, and I am focused on being the best husband and father I can be.

"This was not that. I am incredibly proud to be working on Palmer.

"Looking forward to continuing to make this movie and excited for people to see it."

Do you remember when Britney and Justin broke up? Let's reminisce together in the comments below.

'There have always been rumours Britney had an affair with choreographer Wade Robson, but neither have ever spoken about it publicly.'

No, but everybody else has confirmed it. Which makes the slimeball Robson a cad as well as a bald-faced liar. His time will come. Soon.