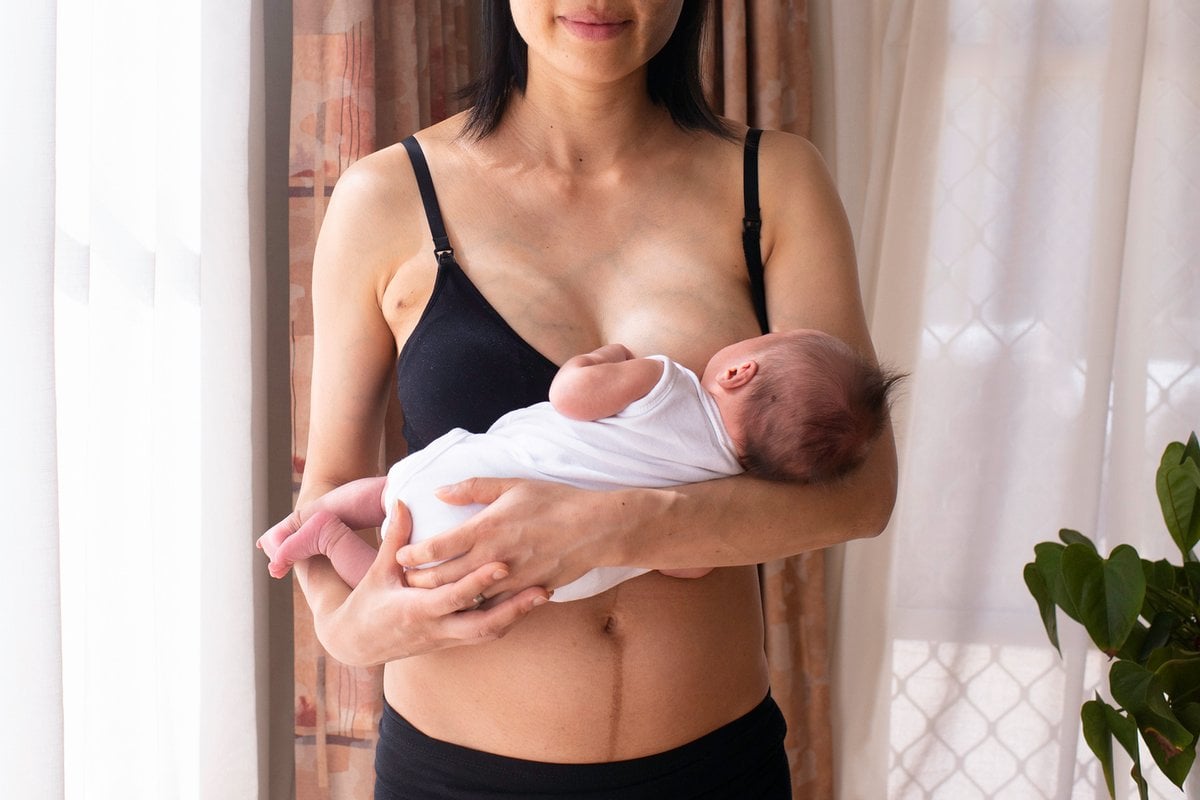 "She latched, but the pain was excruciating – like razor blades every time. I had blisters and bleeding.

"By day 10 she completely refused my breast and would scream at the sight of it. I pumped breastmilk for nine months. The rejection was traumatic.

"No one ever talks to me or asks how I feel about it. It’s an extremely lonely journey and breastfeeding mums will never understand the grief."

Breastfeeding a baby is a very individual experience.

For some women, when it doesn’t work out, they switch to formula with a feeling of relief and never look back.

For others, it’s much harder to give up on the idea of breastfeeding. They struggle on through the pain, and when they finally accept that they can’t continue, they’re left with a sense of grief.

No matter how many times people reassure them that “fed is best”, the sadness remains.

When Mamamia asked women to share their experiences, they came in a rush.

“My babe had an undiagnosed tongue tie for her first few weeks, and despite constantly feeding, she was dropping weight. I was advised to switch her to bottles, which I did, but it resulted in complete breast refusal by four months. She is happy and healthy, but even though she is nearly 18 months old, the grief of not being able to ‘properly’ breastfeed her still feels so raw.”

“Cracked bleeding nipples, mastitis, pumping around the clock to produce 10mls and two admissions to hospital for post-surgery blood clots. After three overwhelming weeks of guilt, shame and exhaustion I could not sustain, while simultaneously supporting my elder daughter with home learning, I knew I would have to call it a day. My baby began putting on weight, and I was getting (some) sleep as I wasn’t pumping. The intensity of grief and shame was all-encompassing and contributed to my anxiety. Thankfully, I had a very supportive psychologist.”

“Breastfeeding didn’t work out. I still feel I need to justify it and give excuses. My daughter was born two months early, and I had a major postpartum haemorrhage and required a blood transfusion. I’ve had counselling, including EMDR (the one Prince Harry had for PTSD), and definitely feel better about it, but still feel like a failure. My daughter is now nine months old and thriving. However, the trauma of not breastfeeding still feels very close to the surface, and it doesn’t take much to feel like I’m being judged or that I’m a bad mother.”

Brisbane clinical psychologist Amanda Donnet sees a lot of women who are struggling to deal with not being able to breastfeed their baby when they wanted to. She says she’d never tell a mother that it doesn’t matter how she feeds her baby.

“People say that to women all the time,” she tells Mamamia. “But saying to a woman who has really struggled with breastfeeding that how she is feeding her baby doesn’t matter, although it has all the best intention in the world to be reassuring, it can feel dismissive and invalidating.”

For women who wanted to breastfeed, it can be “really difficult” to accept that they can’t.

Donnet says research done by Professor Amy Brown in the UK shows that people’s response to breastfeeding not going according to plan can vary markedly. At one end of the spectrum, it can meet the criteria for post-traumatic stress disorder.

“This can actually be a full-blown, not just grief response, but a traumatic experience for women,” she explains. “It’s a pretty broad spectrum.”

“It’s really helping women to anchor into why breastfeeding matters and seeing how they can actually meet all of those goals even if that doesn’t come from milk. It’s often less about the breastmilk and more about how they wanted to be as a mother.”

Women might say they wanted to breastfeed because of the “unique connection” that it gives them with their baby.

“It’s actually reminding them that even without breastfeeding in the picture, the relationship that they have with their baby will always be an incredibly unique relationship.”

Donnet says research has shown that breastfeeding is “protective” of women’s mental health – but only when it’s going well.

“So women who are breastfeeding their babies tend to have lower rates of postnatal depression,” she explains. “But there’s a big caveat. Breastfeeding difficulties are incredibly predictive of poor mental health outcomes for women.”

She says breastfeeding difficulties need to be figured out, one way or another.

Otherwise, women can end up “triple feeding” – feeding their baby at the breast, expressing breastmilk and giving that to their baby, and giving them formula as well – on a longterm basis, which is just exhausting.

For women who are experiencing breastfeeding grief, Donnet says it’s important for them to be able to talk to someone who understands.

“It’s about finding a safe space,” she explains.

But she says we can all help by not using the word “best” when talking about feeding babies, such as “breast is best”, because that suggests there’s a right and a wrong.

“There is no one true path. There is no right way. What we need to do is build trust in women’s ability to know what is the solution that is going to work for them in their unique family.”

Donnet believes we need to take away the pressure on parents to be perfect. She says babies don’t need parents to be at their best at everything all of the time.

“It’s allowing ourselves to just be imperfect and good enough.”