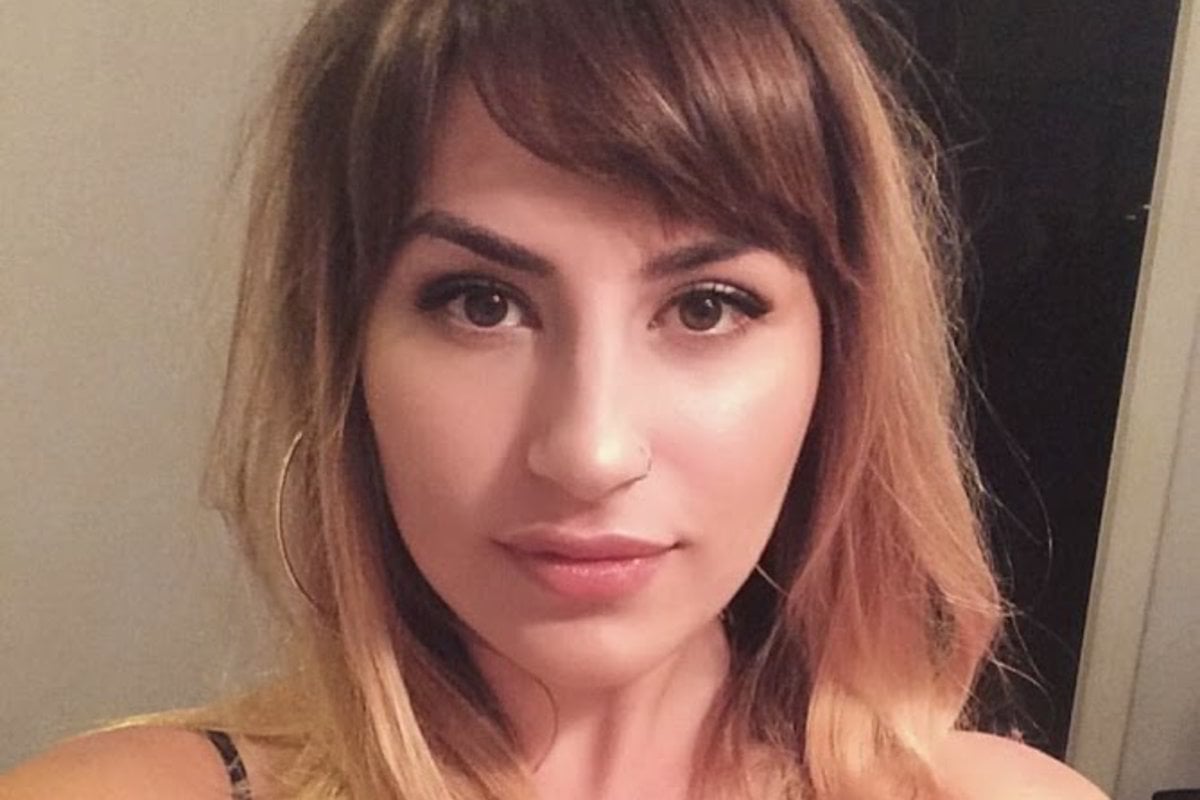 Trying out new trends and treatments was all part of a day's work during my role as a writer for a women's magazine in London. PR executives for beauty clinics would often take me out for fancy lunches, pitching a new product or service I had to review.

As I became more established in my career, the offers got increasingly extravagant until, one day, I got offered lip fillers and Botox.

Only a few days prior had I discussed the rise of lip fillers with a friend of mine which had piqued my interest. Kylie Jenner was all the rage, and her lips did look amazing, if not a little OTT.

The following week I went for my lip injections requesting something more natural-looking and, wow, was I impressed.

In the clinic, the practitioner also found areas of my face that he could administer Botox to, for a more 'refreshed' appearance. I went for that too.

When I got over the feeling of my new lips appearing obvious, I settled into the look and became obsessed with maintaining it.

My self-image morphed into the new me. When my lips deflated, I felt like I needed more filler to feel like myself.

I never let them get back to their normal state for the next three years. I would count down the weeks until my regular clinic allowed me to get them done again, and if I couldn't wait any longer, I went somewhere else.

There was always another clinic willing to offer free treatment in exchange for coverage of any sort, whether a review of their new skincare line or laser facial. If I needed my filler done too, they'd be happy to include it. It wasn't a big deal. 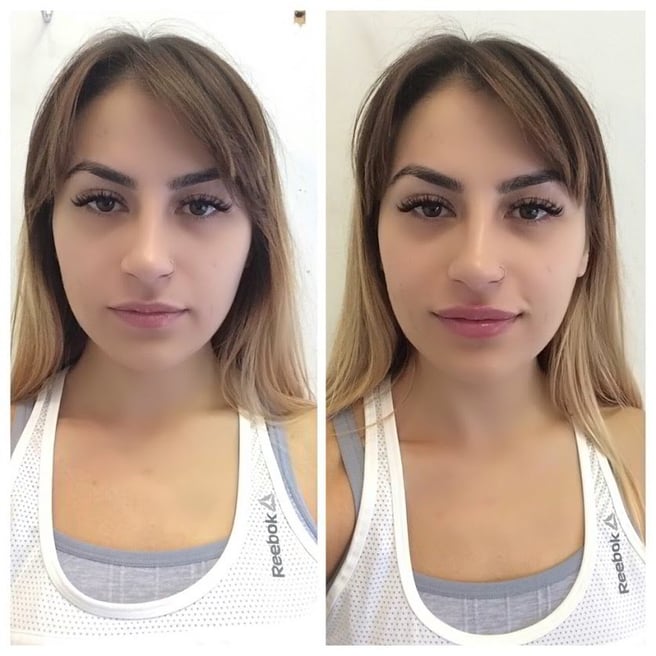 Before and after lip filler. Image: Supplied

I understand how lucky I was to have all this at my fingertips, and there was much, much more to the role as well: free holidays, high-end hairdressing, discounts and free clothes from the best stores on the High Street, and even cosmetic surgery.

I had it all for about five years. It was the ultimate dream for a 20-something woman - but minus a decent salary. I had no complaints, though, as everything I wanted at the time, I could get for free.

While I understand how women with more disposable incomes can factor the cost of fillers into their budgets, I personally couldn't justify it on a casual reporter's salary with London rent to pay.

I relied on clinic freebies to maintain my now unshakeable habit, and it was becoming worrying. Would I compromise my integrity as a journalist for a top-up?

Luckily, while in London I didn't have to. I was an established name in beauty journalism known by PR companies across the city, with clout as unshakeable as my filler habit.

When I moved to Australia, I ended up paying for filler and it conflicted with the way I saw myself. I really couldn't afford it - or at least, I didn't want to be factoring expensive fillers into my budget. It felt frivolous and silly. I was in such a haze of obsession and habit, though, that I couldn't imagine not going for regular filler or accepting myself in the mirror without it - even though I knew I was perfectly happy with my lips before I ever got it done.

A few months after I paid for that filler treatment in Sydney, four years after first getting hooked, I met my other half on a farm in Bundaberg.

We were both UK travellers embarking on farm work for our second working holiday visa. He's a simple kind of guy who is against fillers and Botox.

I personally didn't like his black and white, negative opinion because I enjoyed my treatments and felt I should be allowed to get them done.

Andrew wasn't about to change his mind, though, so on a visit home, I snuck back to my favourite clinic for free lip filler and Botox away from his judgement.

Profoundly, the effect this had on me was minor compared to before. It didn't give me a massive rush of joy and satisfaction like it had in the past.

It was soon after that when I realised I was over my habit; I was over the mental reliance, the hit of endorphins and boosted self-confidence that filler once gave me. It just didn't do it for me anymore.

While I liked the look of my fillers this time around, I didn't necessarily prefer it to my natural lips. Something within me had shifted. I guess I just thought I was good enough as I was. It's not that I stopped having have days of low self-esteem, it's just, now I made myself feel better with some self-care, eating well, exercise, putting a bit of makeup on or doing my hair.

I didn't need to modify the fundamentals of my appearance to feel good again. 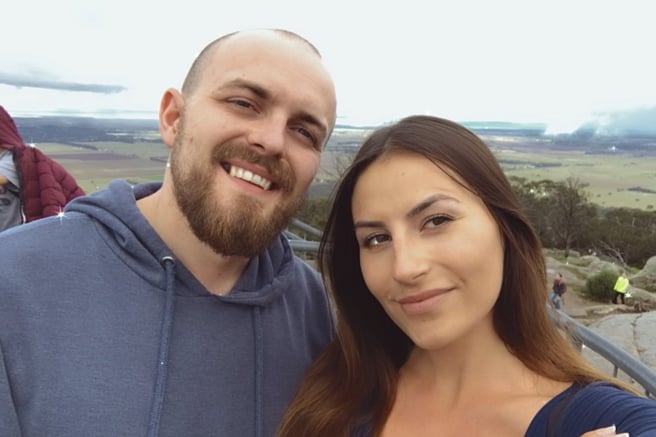 When I met Andrew, we started going camping in the bush for long weekends no matter the weather, no showers in sight. This meant waking up gross and sweaty or freezing cold, dealing with greasy hair, washing with baby wipes, and wearing layers of hiking clothes 24/7.

It was not a good look and certainly not one that matched my previous glamorous appearance. I even wore makeup during our farm work. However, I slowly stopped wearing makeup all the time and started to accept myself as pretty enough without it.

The rewards involved more than just seeing real, raw, beautiful Australia, waking up with wallabies joining us for breakfast at the campsite, exploring local waterfalls and hiking trails, and mentally unwinding in nature. I had to adapt my idea of self to allow this new lifestyle.

Looking a certain way became less important to my worth as a human. This now comes from some other, more permanent place within me.

It was my spoils as a beauty writer that provided me with unlimited lip filler throughout my mid-twenties: inspiring, feeding and maintaining my habit. In the end, it was several factors that put me off.

I lost the stature of my heady heights as a women's lifestyle journalist - no one knew who I was in Australia. I also fell in love with a simpler kind of life, which was a catalyst for a shift in my self-esteem.

I will always respect a woman's choice to alter her appearance. And I confess I retain a fondness for the practitioner's chair; just not the unrelenting pull of it.