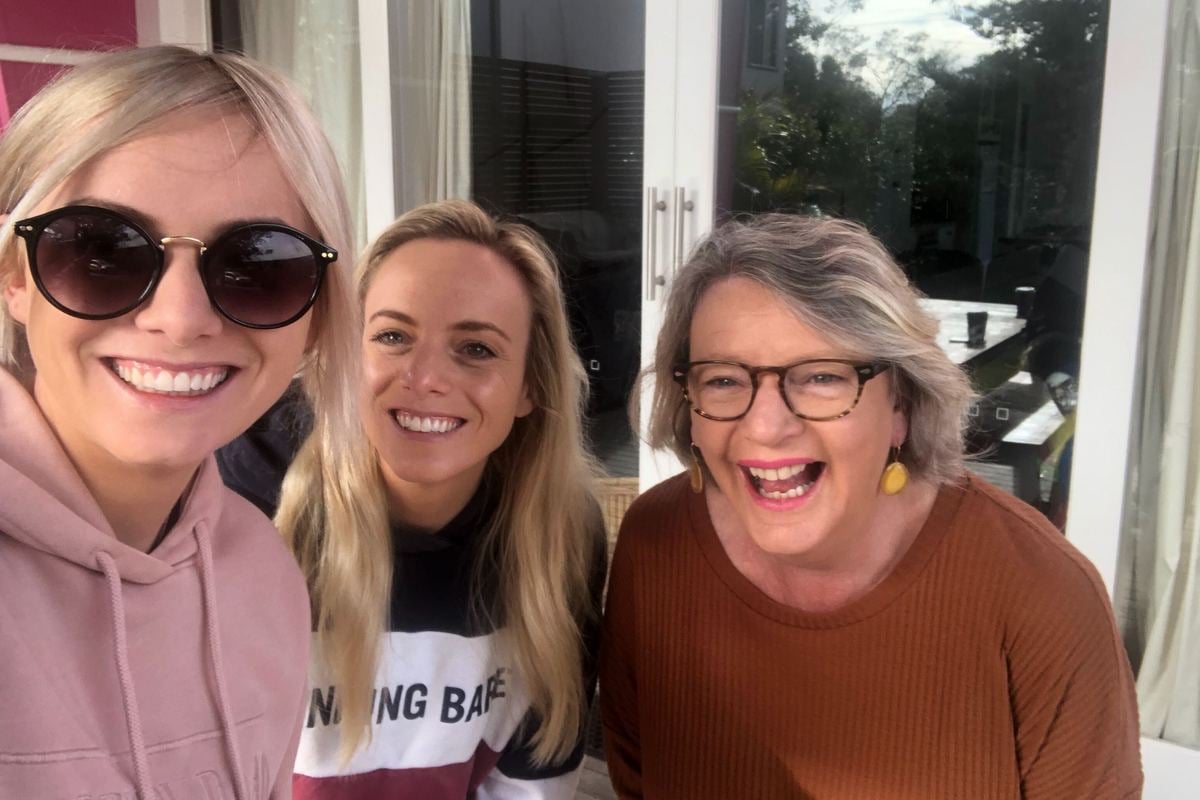 Thanks to our brand partner, Stayz and Tourism Australia

It’s strange, and someone should look into it.

For our family, the year started unlike any other. We were in Narooma, on the kind of family holiday that doesn’t happen as much anymore because we’ve grown into adults with partners and jobs and tickets to music festivals.

We’d been looking forward to swimming and walking and seeing the penguins on Montague Island. In our minds, we were there for an idyllic Australian summer holiday, putting aside Dad’s weird conversation starters and Mum’s appalling selfies that always end up being 80 per cent thumb.

But on the morning of New Year’s Eve, we woke up to a black sky with fires raging in the distance, only made eerier by the sudden absence of electricity and mobile phone service. We spent the next two days trapped in Narooma, cooking on the gas barbecue and lining up to buy what was left on the supermarket shelves. No electricity meant no petrol, and the surrounding area was severely affected, so even once there was a ‘way out’, we were told not to leave. We wouldn’t make it to the next operational petrol station.

For many of the hundreds of thousands of people affected by the fires last summer, these experiences were unprecedented. Fear, uncertainty and utter devastation spread through tiny towns all the way to the major cities, and stories of the toll of the fires on animals, livelihoods and homes made it around the world.

While families like ours went back to our homes, and the smoke in the city eased, places like Narooma had a hard road of recovery ahead of them. We’ll go back with empty eskies, we told ourselves. We’ll visit for Easter, for the June long weekend, for road trips throughout the year. We’ll build them back up.

Then the global pandemic hit.

In the weeks leading up to Easter, we were firmly told any travel was banned. We were to stay at home for the health and safety of the country. A sacrifice for every single one of us, yes, but a wound on top of a wound for those communities affected by the bushfires.

In late June and early July, restrictions in New South Wales started to ease. For many of us, the energy that galvanised us to donate to bushfire relief and tweet about our eskies has gone. But there’s a part of each and every one of us who still wants to help in a world torn apart by COVID-19.

Now, we are not nurses.

We are not doctors.

We’re not firefighters or paramedics or teachers or business owners or part of that special group of people with fancy CVs that Scott Morrison put together to rebuild the economy.

But we do have one skill. We’re very, very good at going on holiday. Relatedly, we are good at spending money, and also relaxing.

So one weekend in June, we looked at each other and said, "today, our country needs us". We put on our capes and committed to an act of service we hope our grandchildren will be proud of.

It was time to go on a holiday.

We took the #RoadTripPledge. You might've seen it on your social feeds - it's a campaign launched by Stayz in partnership with Tourism Australia designed to remind us of the rich experiences regional Australia has to offer. By taking the pledge, we're committed to exploring these towns and putting money back into the communities that need it most.

So, we packed Jessie’s tiny car with the essentials: snacks, wine, books, warm clothes and a Mum, and we got on the road.

We listened to podcasts and talked and admired how green the South Coast has become in just a few months. While we’ve all been indoors, the land has been reviving itself. Driving through, it feels like a different country to what it did in January.

After just under three hours, we arrived in Culburra. We stayed in a beautiful, big, pink house booked on Stayz, with lots of heaters and a kitchen that Mum still hasn’t stopped talking about. We spent the first night curled up on the lounge with wine and chocolate, talking about the weeks and months that have passed. 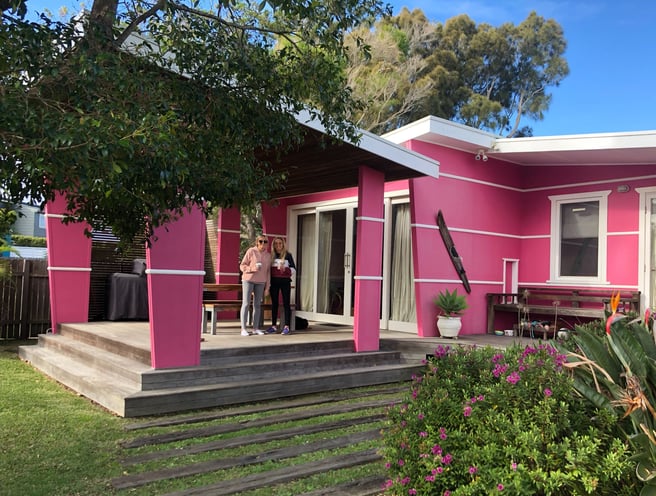 No, really. The house was legit pink. Image: Supplied.

The rest of the weekend was spent walking along the beach, laying in the bath with a book, napping on the lounge, eating burgers that we dutifully bought from down the street in order to support local business, buying more coffee from a coffee van (again, we deserve an Order of Australia medal for our commitment to stimulating the economy), and watching whatever movie was on television.

We're being asked to 'Holiday Here This Year' as part of Australia's national bushfire recovery effort, and honestly, that's just one of a million reasons to go on a local trip. 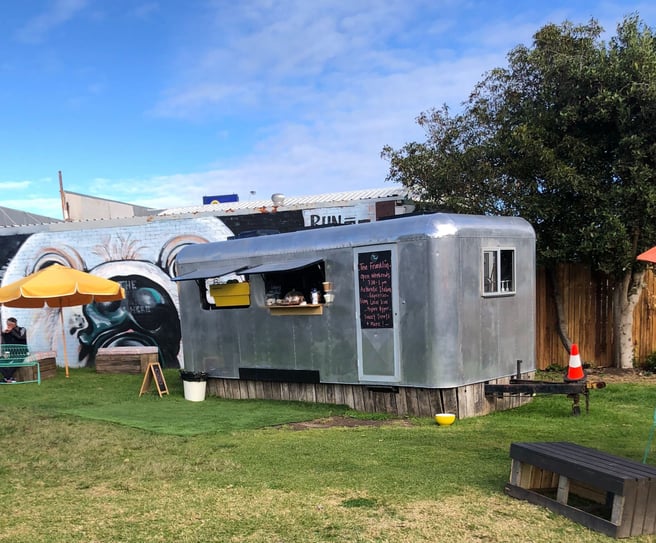 IT'S A COFFEE VAN. MUST STIMULATE LOCAL ECONOMY. Image: Supplied.

We realised that if Australia was a person, she's had a pretty rough year. She probably had a whole diary full of New Year's resolutions. Goals she set. A mood board with "live, laugh, love" written on it. In March, she was sure the worst of 2020 was behind her. It had to be. And then she was hit by a global pandemic, the kind that only comes around once every hundred years. And then it was followed by a recession. She's stressed and she's isolated and she's scared.

She needs a holiday.

She needs to be reminded of what's in her backyard. Of the small things she might have otherwise taken for granted. Of the people that make us great, and the beaches unlike anywhere else in the world. And she needs to spend it with the people she chooses. Not the idiots she's been locked up with for months. 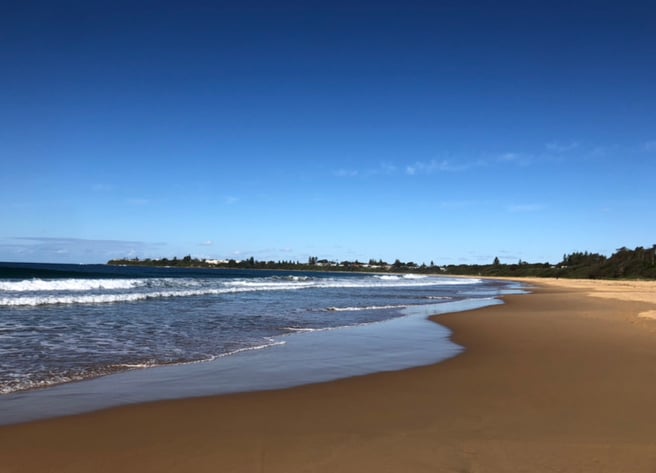 Australia needs to spend a week (at least) on the beach. And not look at their phone. Image: Supplied.

Not every Australian can take a holiday right now. Some are still under Stay at Home orders, or have compromised health and can't take any chances. Others can't afford it, and might not be able to for some time.

But all of us - no matter our circumstances - have never deserved one more.

This is the kind of year we need a break from. ﻿﻿

Make your #RoadTripPledge to holiday here this year and help us regenerate regional Australian towns.