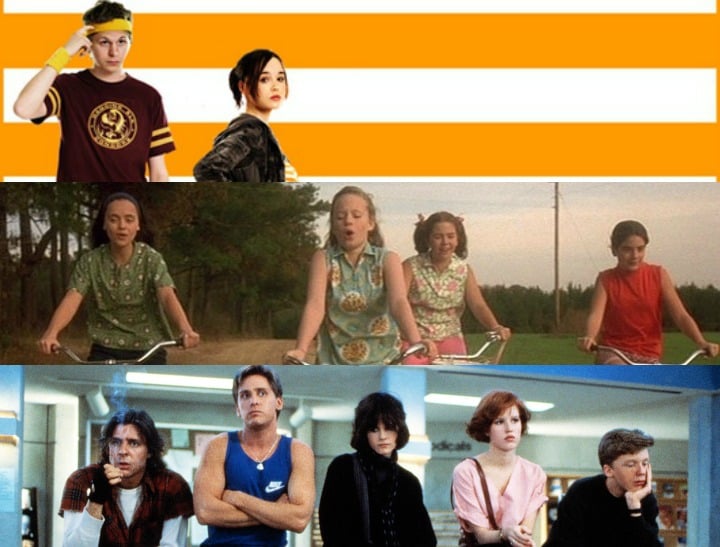 Because they never get old (even though we do).

Whether it’s desperation to fit into the cool clique or struggling against your parents’ rules — the reason that we love coming-of-age films is because they’re so damn relatable. Even if we have never found a dead body with our friends or owned a magical pair of jeans, we understand the emotions and can put ourselves in their shoes (or pants).

We felt it when Juno decided her child’s fate and we fist-pumped when Ferris stuck it to his principal. We all know how much growing up sucks and the trials and tribulations it brings with it.

So if you haven’t caught up on these cinematic gems now is the time.

No excuses. Consider it a self-imposed detention…

“Anyone can cook aloo gobi, but who can bend a ball like Beckham?”

Sometimes girls just wanna play football, dammit. This movie made us love Keira Knightley (and Jonathan Rhys Meyers) and taught us that you gotta fight for your right to…play soccer.  We cheered for Jess when she finally convinced her conservative Indian family that she should be free to do her thing, and we cheered even more when she made out with her stud muffin coach.

When home-schooled Cady Heron moves from Africa and starts at an American high school, she’s got a lot to learn about cafeteria tribes and buttering muffins. After accidentally infiltrating the cool girl group — The Plastics — she’s pushed to sabotage them by outsider Janise Ian and the “too-gay-to-function” Damien. She quickly finds out that popularity isn’t all it’s cracked up to be  and real friendship will always win out (consistent coming-of-age lessons). Oh and that ALL girls should do maths.

“Life moves pretty fast. If you don’t stop and look around once in a while, you could miss it.”

The ultimate movie for when you feel like chucking a sickie. Ferris, his girlfriend Sloane and BFF Cameron ditch school for the day and took a tour of Chicago. Along the way, Cameron learned to stand up to his domineering father and Ferris repaired his strained relationship with his sister while taking down the evil school principal.

“I might even lose my virginity to him. I don’t know when it will happen. You know, maybe in five minutes, or tonight, or six months from now, or maybe on the night of our wedding. But the really amazing thing is, it is nobody’s goddamn business.”

High-schooler Olive Penderghast tells her badgering best friend Rhiannon a little fib about losing her virginity (which subsequently gets around the whole school thanks to gossip hound and religious freak Marriane). When lie begins to take on a life of it’s own, Olive starts to learn that truth is always to best policy. It’s smart, witty and hilarious and taught us that even if you don’t care about what others think you should always care for yourself.

“I never had friends later on like the ones I had when I was twelve. Jesus does anyone?”

This classic coming of age film based on the Stephen King novella “The Body” tells the story of four young boys who set out to find a missing body and become local heroes in the process. In the end the kids find out that growing up sucks, life isn’t fair and everything won’t always be ok. Welcome to adulthood. Also: River Phoenix RIP.

“Money and women. The reasons for make most mistakes in life. Looks like you’ve mixed up both.”

Jamal Malik is and 18-year-old orphan from the slums of Mumbai on the verge of winning 20-million rupees on India’s “Who Wants To Be A Millionaire?” with each flashback chapter of his story revealing how he knows the answer to each question. The whole of India is watching and rooting for him to win the money (and the girl) and by the end of the film we all were too.

5. Perks of Being a Wallflower.

“We accept the love we think we deserve.”

Charlie is a socially awkward “wallflower” who is befriended by free-spirited Sam and her stepbrother Patrick. While they show Charlie the joys of first love, music and friendship the movie (and the book it is based on) poignantly deals with issues of depression, homophobia, suicide and sexual abuse. And Emma Watson. Enough said.

“Fuck, this hurts so much.”
“Yeah, I know. But that is life. If nothing else, that’s life, you know. It’s real. Sometimes it fucking hurts. But it’s sort of all we have.”

Instead of a the usual teenage coming-of-age flick Garden State is more about older characters finally growing up and getting their shit together. It features the classic tale of boy gets headaches, boy’s mum dies, boy heads home for funeral, boy meets girl at the doctor, boy and girl go on quest for dead mum’s necklace, boy and girl shout at rock formations, boy and girl make out in the rain to excellent soundtrack.

“That ain’t no Etch-A-Sketch. This is one doodle that can’t be un-did, Homeskillet.”

Sixteen-year-old Juno MacGuff finds out she’s pregnant after losing her virginity to friend and longtime admirer Paulie Bleeker. Juno is forced to face a series of very adult decisions and ultimately chooses to give the baby up for adoption. After she finds the seemingly perfect couple, complications arise when the prospective father comes on to her. The story is fiercely funny and touching, ultimately showing us that one decision can have a lifetime consequences– good and bad.

“All women have a garden, and a garden needs a big hose to water it… or a small hose… as long as it works.”

It had a timeless sex education lesson and an all-star cast. The narrative follows four best friends who recount a summer they shared together back when they had only two goals: saving enough money to buy a tree house and avoiding the Wormer brothers. Chrissy, Roberta, Sam, and Teeny taught us everything about hitting puberty, female empowerment and…er… “watering flowers”.

“We’re all pretty bizarre. Some of us are just better at hiding it, that’s all.”

Who knew a movie about a bunch of kids in detention would give us all the feels? In the course of one morning, kids from different high school cliques, learn that they’re not so different after all. This was Molly Ringwald and John Hughes at their finest. And that final scene when Judd Nelson raises his fist to  “Don’t You (Forget About Me)”? Unforgettable.

A definitive ranking of the 12 greatest dance movies of all time.

Five reasons why this noughties teen movie should win an Oscar. Seriously.

Slum dog Millionaire is a close second, but VisionQuest skeaks on the level of a young man's concept of his environment and his struggles with his emotions, hormones, challenges, fears, etc.

Watch that old movie and if you were an athlete (particularly a wrestler) then you will know what I mean.

All the other so-called "coming of age" movies are moreover clap trap and satire of what we hold sacred in the memories of our youth! They are fun to watch and laugh at, but when we go to bed... before we fall asleep... we have a visionquest about our past and the things we could have done... but did not!