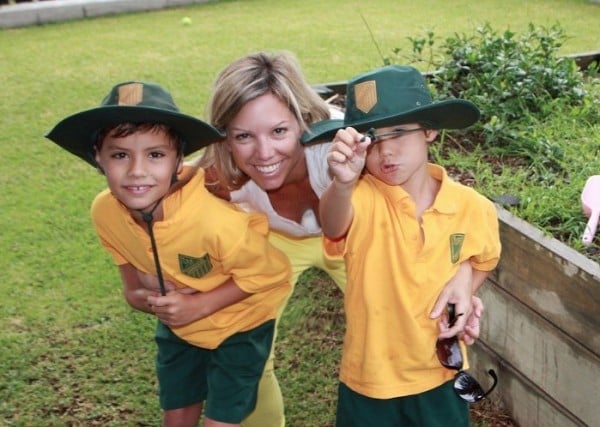 I’ve been dreading the day my kids no longer believed in Santa. I knew it was there in the future, but I imagined it was further off.

Then just two weeks ago, my son came home from school and the words that every parent hopes won’t be said for ‘just one more Christmas’ came spewing forth.

“Santa’s not real. George told me.”

It’s the ramp-up to the most exciting time of year. The next few weeks are to be filled with promises of joy and awe of lists to write out, of Santa photos to be taken, of anticipation and wonder and here he was just eight-years-old and that carpet of magic had been swept from under him.

I tried to bluster my way through convincing him, but I am sure it was a second rate job as he simply looked disappointed.

One of the biggest events on our calendar was the next day. The local community carols.

Do you go to carols? Did you used to when you were young?

When I was a kid, Christmas carols meant burnt fingers from wax dripping onto them. It meant mum laying out Jatz and cheese squares on a plate and covering it in cling film to take to the local park. It meant a bag of salt and vinegar chips as a special treat. It meant drinking Tang with your friends on a rug under the stars near the see-saw while your parents drank cask wine out of plastic flutes with the neighbours over on the park benches.

It was one of the dads dressed in a Santa suit driving in to give the kids a present on his Ute. He always knew our names and we never put two and two together why.

It was a once-a-year community occasion that we all looked forward to with glee.

These days our community carols are on a much bigger scale. If you aren’t there by 6:00pm, you won’t possibly get a spot near the front. The candles are battery powered (and $5 each), the plates of nibbles involve at least three types of dip, olives and several different types of bread and we are the ones drinking the wine, still on a park bench, still out of plastic flutes, but bottled rather than cask.

The one thing that’s still the same is the dad dressed as Santa on the back of a Ute.

Despite his new found knowledge, my son was looking forward to the Christmas carols. We packed the picnic rug and the glow sticks and off we set.

Through Hark the Herald Angels the local children ran and played; as Silent Night rang through the night they held their battery-operated candles high. They danced to Jingle Bell Rock and kicked a soccer ball as they sung the words to Rudolf the Red nosed Reindeer. Neighbours laughed and shared chicken wings and passed around pita bread to dip in hummus. Champagne was opened and everywhere you turned, people were wishing each other Merry Christmas.

And then the moment came.

Here Comes Santa Claus was the song that drew their attention. A man in a bright red suit on the back of a Ute came rolling across the park.

My son idled up me and leaned into me rather than joining the rush of children to the front.

Don’t you want to go see Santa? I asked him.

“He’s not Santa he said he’s just some guy in a red suit.”

As he pressed against me in that eight-year-old boy way of giving his mum affection in front of his mates I saw his interest sparked by the man in question hoisting a large red sack out of his Ute.

He decided to go up anyway.

Santa was there chatting to the gathered group of excited kids asking them questions and handing them a gift. My son was jostled into line glancing about wondering whether at eight he was really too old to lining up for a gift from a man in a big red suit.

When it was his turn the great man bent over him and said something to him I couldn’t catch - I was at the back of a large throng of kids. My son answered speaking to the ground, as children tend to do. Then something unusual happened. Santa stopped and knelt before him. He put one white-gloved finger on my son’s chin and spoke to him. My son’s eyes left the ground and shot straight to Santa, his mouth open.

He took his gift and ran off with his friends occasionally turning back to shoot a look at Santa.

When the night ended, we walked home with the sounds of Christmas ringing in our ears. I asked my son what Santa had said, expecting him to tell me that it wasn’t really Santa. But instead he looked at me with tired eyes and said:

“Mama, he really was Santa. George was wrong.”

“What makes you say that?” I asked.

A night of carols, the pleasure of shared food and the closeness of our community had given me back Christmas.

I still haven’t found out which of the local dads was in the Santa suit. It doesn’t matter really, around here, in our community we all know each other’s names but this man will never know just how fortuitous it was that he used Jasper’s at that very moment.

What age did you stop believing in Santa?