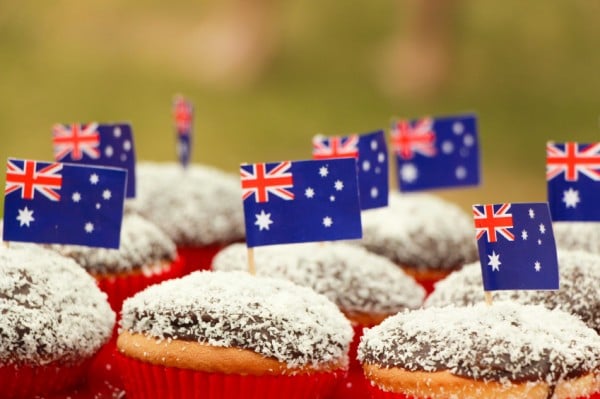 Whether your kids are first generation Aussies, soon-to-be-citizens or descended from Ned Kelly there is nothing prouder than an Aussie kid.

It’s time to celebrate just what makes it great to be a child of our nation.

1. The national anthem includes the words “Australians all let us meet Joyce, For she is young and free” and “Our land is dirt by sea”. And they will get to sing it once a week while baking their behinds on the searing asphalt of their school playground.

2. Coffee addiction starts at an early age with a babychino licked from a spoon while mum guzzles a latte.

3. Our national dish can be served on toast or to flavour an ice-cream (Vegemite gelato anyone?). It can even be added to spaghetti, casserole or couscous.

4. They will develop a taste for laksa and dhal before they are two. Takeaway night will more likely be Thai, Indian or Malaysian than junk from a fast food chain.

5. They learn psychological warfare in sport at an early age (AKA sledging). But importantly they will also learn that sledging has rules, that you can take the piss out of someone but never can you slag their their beliefs, family life, sexual orientation, race or religion. Hair colour though is fair game.

6. Our national game can be played in the backyard. The wicket is a garbage bin, chair or a couple of sticks and the rules can re-written as often as they like.

7. Hamburgers come with the lot: pineapple, beetroot and fried eggs. And chips come with chicken salt.

8. School excursions are to the beach. And inevitably it will be a stinker and some of the kids from kindy will jump on the year three’s sandcastles causing an outbreak of World War Three that’s easily resolved when the teachers bury the Year 3’s up to their necks.

9. They will get to visit Healthy Harold. A talking giraffe teaching kids about drugs in a dimly lit van. As Aussie as it gets.

10. A frozen poppa in their lunch box is a special treat. A juice box, a tetra packed rink, whatever you call it. Nothing beats it on a scoring February day.

12. They have access to an education system that ranks amongst the highest in the world. The Programme for International Student Assessment ranks our schools as sixth for reading, eighth for science and thirteenth for mathematics, on a worldwide scale of 56 countries.

13. The term playdate is still used (at times) with a touch of irony. We hope.

14. As a rite of passage they can ride their bikes to the local corner store and buy a banana paddle pop.

15. Our kids are experts at telling apart a funnel web from a redback. They learn early when mum and dad scoop ‘em from the pool.

16. Due to our 90% vaccination rates they have a small chance of catching diseases like measles or meningitis. (But we could do better.)

17. They will learn how to cheat at Marco Polo without being caught. “Fish out of water?” FREEZE.

18. They will grow up believing men and women are equal, a fair go is a national quality and freedom is the most important thing a country can have.

How are you celebrating Australia day?

“It’s the part of getting my kids ready to go back to school that I dread the most.”

“I lost my six-year old over the weekend. But I wasn’t worried.”