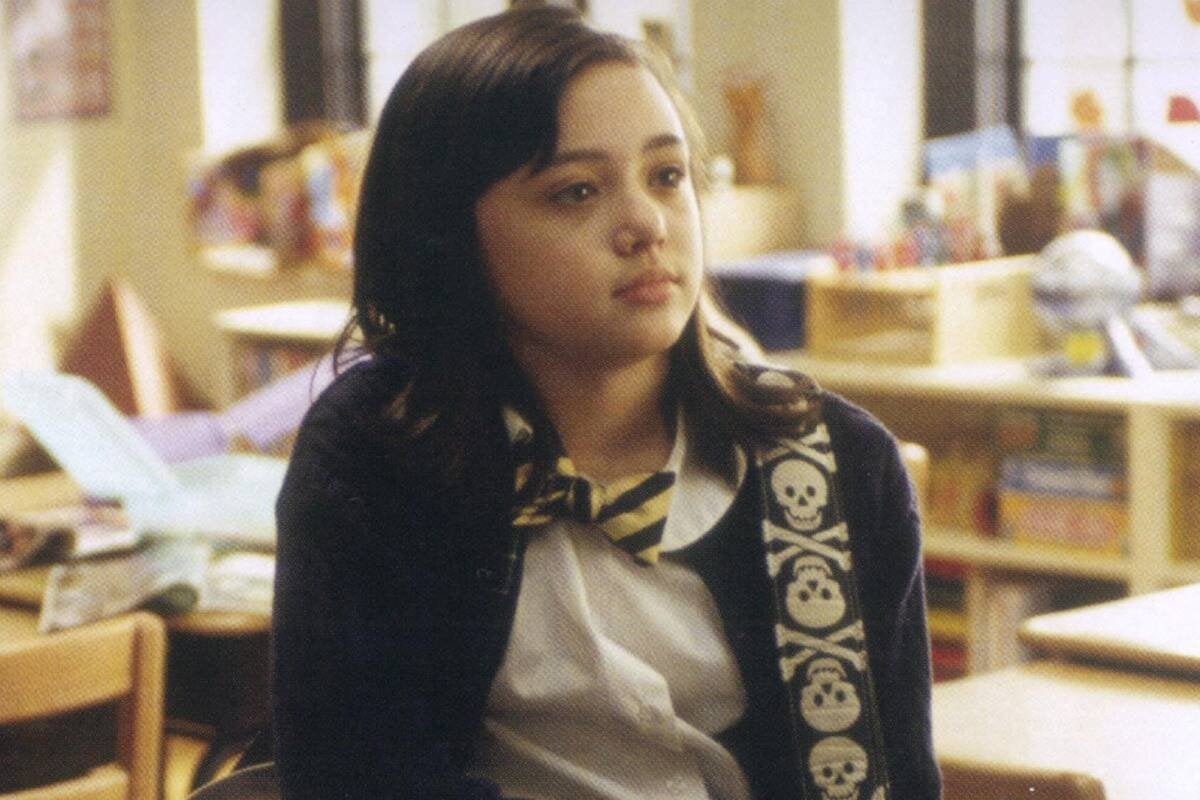 This post deals with mental illness, disordered eating, substance abuse, self harm, and childhood abuse and might be triggering for some readers.

In 2003, I was in a film called School of Rock. I played a character named Katie. Katie was 10 years old and played bass guitar and had about five lines that mostly consisted of one word each.

I got to meet some of my idols, attend the MTV Movie Awards hosted by America’s sweetheart Lindsay Lohan, and travel the world before I even got my first period. Then, after instantly fading back into obscurity, I fell into the classic child actor pattern. I’ve spent the last 16 years of my life trying to be anything but "that kid from that thing" even though the blunt reality is... no one even cares that much.

Let me preface this by saying that I am absolutely grateful for the experience as a whole. For those who reach out to me expressing the fact that School of Rock inspired them to pick up an instrument.

For the femmes who let me know that their first queer crush was on my character. (Does this make me a queer icon? If so, love that for me.) For all the opportunities that followed.

And especially for my cast mates, who I see as forever family. None of what lies ahead in these next paragraphs will ever diminish these factors.

However, I do have some very complicated feelings about School of Rock, so let’s dive into it, shall we?

From as early as I can remember, my parents told me I was "destined to be famous." My family praised me and gave me all the validation and attention in the world. They spoiled me. They called me perfect and beautiful. They kept a journal of all the adorable and charming things I would do and say. They would encourage me to sing and dance at family functions to entertain my relatives.

But at school, I was shy and weird, so I was bullied immensely and constantly felt like an outsider. In addition to all that, my parents were classic covert narcissists.

They were emotionally manipulative, sometimes physically abusive, and both struggled with disordered eating and body dysmorphia.

All of this gave me extreme imposter syndrome, crippling anxiety and body image issues from a super young age.

My parents put me in guitar lessons against my will when I was four. Music became my passion and my escape route. When I was nine, I was on a radio show called From the Top that showcased kids who played classical music. A few months later, a casting director reached out to my guitar teacher expressing interest in having me audition for Untitled Jack Black Project.

I didn’t know what any of this meant because I was 10 and all I really cared about was ice cream and having, I don’t know, one friend that wasn’t a blood relative.

Initially, I read for the band manager role (which eventually went to Miranda Cosgrove, hey sis) and played a few classical songs on guitar. For the callback they asked me to "rock out."

My mum bought me a kid-sized electric guitar, and I played a Lenny Kravitz song. I found out I’d booked it the next day. They told me that I’d be playing a character that they wrote specifically for me and that I’d be leaving in two days for New York to live in a hotel with my mum for four months.

The idea that Mike White, Jack Black and Richard Linklater saw something in me still blows my mind.

While on set, I met 14 kids who were all underdogs like me. We all fell in love with each other pretty much instantly, and our mums were a cast of their own (and honestly could have had a highly entertaining reality television show.)

When it came to filming, I was a walking panic attack. I would f**k up my lines, I would look into the camera and ruin takes. And when I looked into the lens what I saw was my entire family saying "Don’t f**k this up for us" and my bullies laughing at me and calling me fat.

All this to say that off-screen, it was fun as hell. I was 10 years old and rich. I got to see Heather Headley and Adam Pascal in the original Broadway cast of Aida. I got to eat room service every night. I got to live my Eloise fantasy. And then we wrapped.

I went home to Chicago, and because kids are assholes, I was bullied even more when I came back to school.

I’ll never forget one girl who came up to me and asked me to sign her lunch card and then tore it up and threw it in the trash in front of me. When we started the press tour, I was pulled out of school and got to be with my friends again.

Upon seeing myself on the big screen at the premiere, I judged myself for being the tallest person in the cast, for having bags under my eyes and weird teeth, for having a fat belly and no breasts.

I started obsessing over food and truly hating my body. My mum, despite having zero experience in the film industry, decided to take on the role of my manager.

She was not helpful whatsoever, always throwing in her two cents when it came to my diet and my body and my clothing. Filipino mums can be like that.

In the message boards (what a time 2003 was) men would sexualise me, commenting "the bassist is going to grow up to be hot" and "can’t wait 'til she’s 18." My mum would read the comment section for hours on end and relay all of the negative ones to me.

When I was in sixth grade, a strange man in a trench coat came to my school and came up to me and tried to take photos of me, and absolutely nothing was done about it.

Every time someone brought up the movie, I didn’t think of meeting the Olsen twins or being on Sharon Osbourne’s talk show.

I thought of my mum calling me a piggy for taking a third helping of pasta. I thought of my abusive alcoholic ex-boyfriend starting a rumour that Jack Black was my sugar daddy.

I thought of all the awful comments on the message boards, the bullying, and the shame of being sexualised as a 10-year-old.

From the age of 14, I used drugs, alcohol, sex, food, and self-harm to numb all of this pain. I’ve survived dozens of toxic relationships and three suicide attempts.

I’m not saying all of this is because I played bass in a movie when I was a kid, but because I spent over a decade terrified that I’d peaked at 10 years old.

Even recently, over half of the comments on my social media are from dudes who had a crush on the 10-year-old me (some of them are REALLY gross and I want to thank my friends who never hesitate to drag those goblins).

Sometimes the comments are people asking me why I stopped acting, which fills me with rage. Actors are worth so much more than their IMDb credits.

Today, I live in Los Angeles where I work for a skincare company. I still act and perform. I’ve travelled the country as a stand-up comedian and performed in several plays, web series, indie feature films, and bands.

I’ve been fortunate enough to be welcomed into Chicago’s theatre and comedy scenes.

I’ve competed on NBC’s Bring the Funny. And still, no credit or feat is as cool as the fact that I have been in recovery from alcoholism and addiction for two years (and frankly, it’s f*cking hard to maintain sobriety, but sometimes the idea of a TMZ headline reading "That one kid from School of Rock dead from overdose at 27" is all it takes to keep me from a relapse, sadly.)

I’m grateful that School of Rock happened. It’s a great film, and it was, to its core, a fun experience.

I’m grateful for the fans of the film who picked up an instrument because of us. And I’m even grateful for my mother for pushing me to keep acting after we wrapped, because acting truly is my passion.

To this day, I still get recognised randomly at airports and coffee shops. People ask me if I’m "the kid from School of Rock." For a long time, I used to say no and keep walking, but now that I’m in a better place emotionally, I humbly say yes. I no longer carry resentment for people who only know of me as "that kid from that thing."

I know deep within my bones that I’m so much more and that’s good enough for me.

This article originally appeared on Medium and has been republished with full permission. You can follow Rivkah Reyes on Instagram here: @rivkah.reyes.

Frankly, from her description of her family, I think she would have been pretty screwed up irrespective of what she'd done when she was or was not 10 - unless acting is one of those careers that such parents actively push their kids into (that and tennis, I suspect). So perhaps it's more correlative rather than causational.