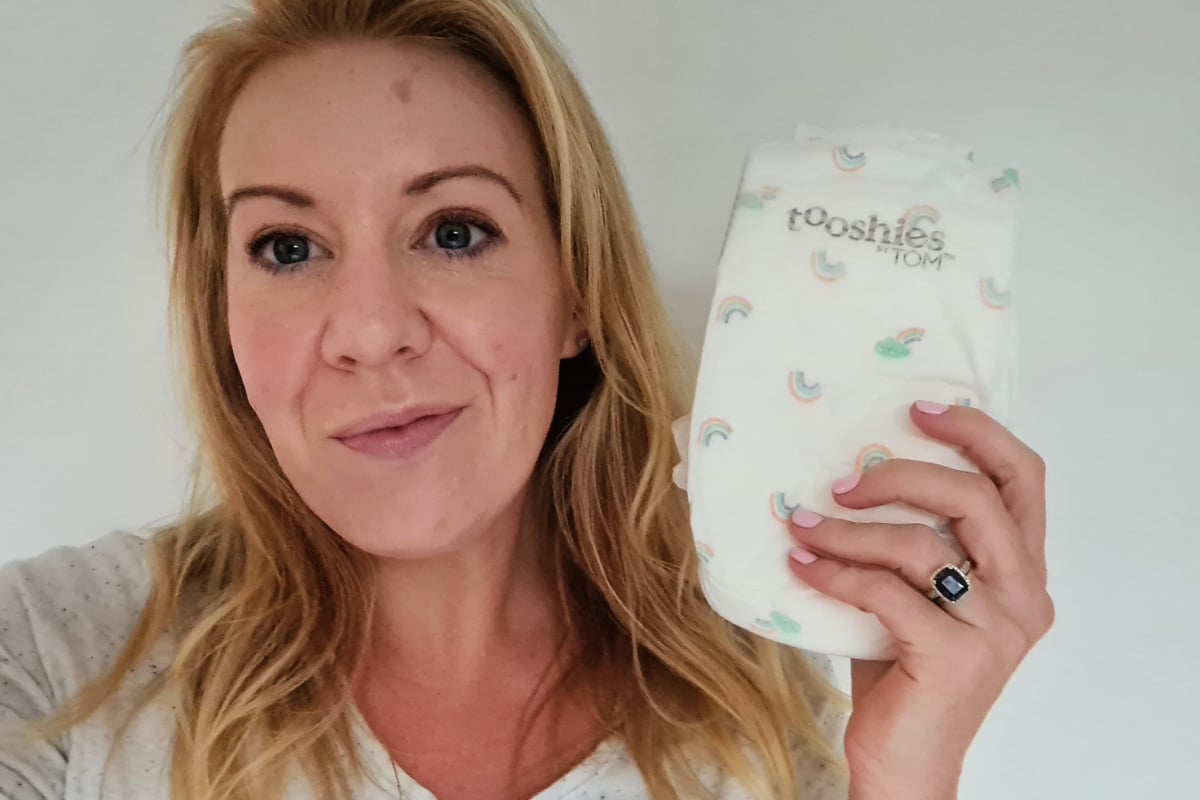 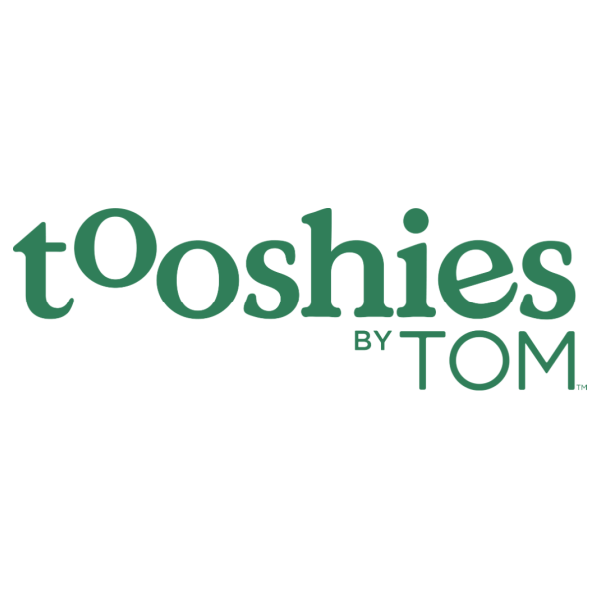 Thanks to our brand partner, Tooshies by TOM

It's a battle we've been fighting from the moment my daughter Georgie was born. For the last 13 months, we've fought - and actually lost - a nasty war against nappy rash.

We've eliminated foods, swapped and switched bath products, used the world's supply of hydrocortisone cream, completely cut out dairy and we're definitely on a first-name basis with our doctor.

And it's made absolutely no difference.

The only thing I hadn't changed, however, were Georgie's nappies. Silly really, isn't it? After all, she wears them for the best part of 24 hours a day. But I, like most mums really, believed that all nappies were created equally.

But that all changed when I was sent a pack of Tooshies by TOM's new organic bamboo nappies to test out. They promised to be more absorbent and softer than ever before, all while being better for the environment.

Yes, bamboo nappies. Organic bamboo is often touted as one of the most renewable crops in the world, and is said to generate more oxygen than other trees and plants. But it has other sustainability benefits too.

These nappies are designed by a group of Melbourne mums who were looking for ways to make disposable nappies we get during our supermarket shops a little more sustainable.

After all, your standard throwaway nappy takes a staggering 150 years to break down. Pretty grim considering 5.5 million of them will be used today.

But Tooshies by TOM are made from organic bamboo and have a biodegradable back sheet. 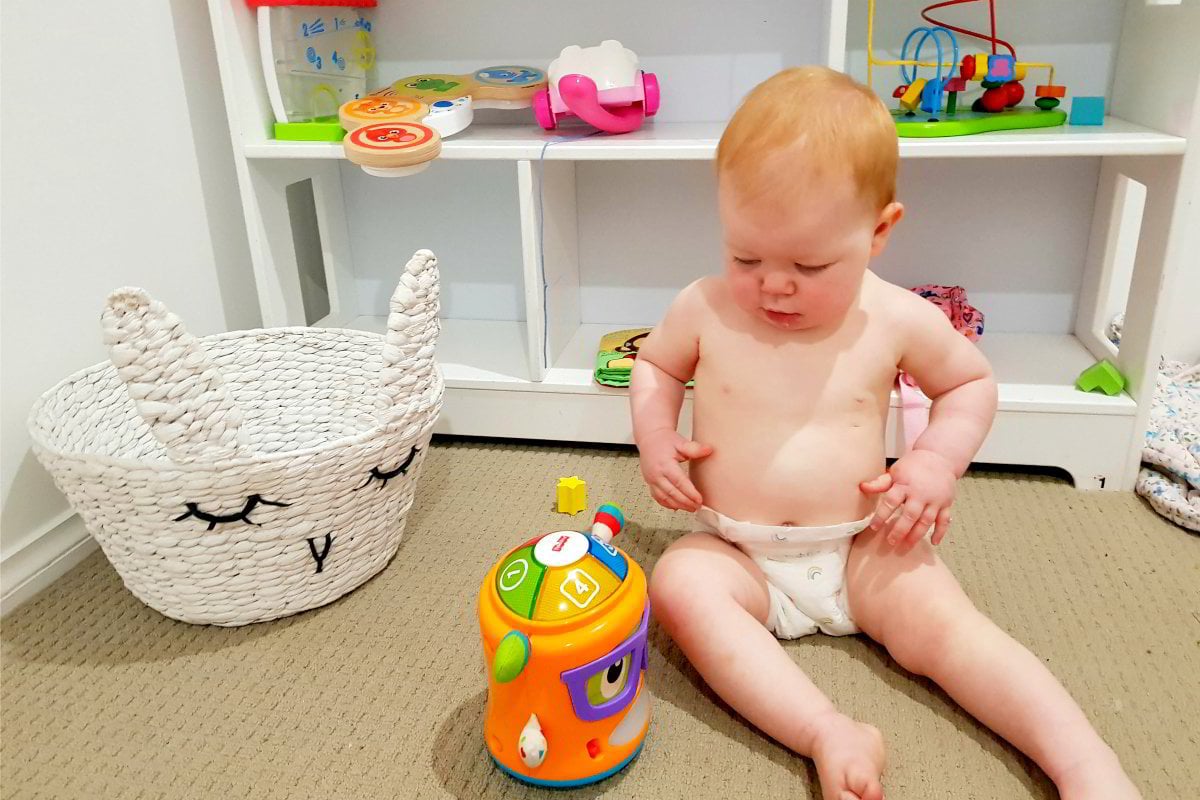 That means they're also incredibly lightweight. So lightweight, in fact, that when I opened my pack, my initial thoughts were, yes, they're very pretty with their cute designs, but they're definitely going to leak.

Being an eco nappy, it made me wonder whether it would be as good as other brands at containing leakages.

Yes, it says ultra-dry 12-hour leak-proof protection but come on, parents, we've been there. We know.

But my doubts were unfounded. We had no leakages or poo-splosions during the whole pack.

And, leaving the best until last, they did something we haven't managed for the past 13 months.

In three days of my daughter wearing Tooshies by TOM, her nappy rash cleared. I repeat, her bum was soft and cute and angel-like for the first time in forever and she was a happier baby. 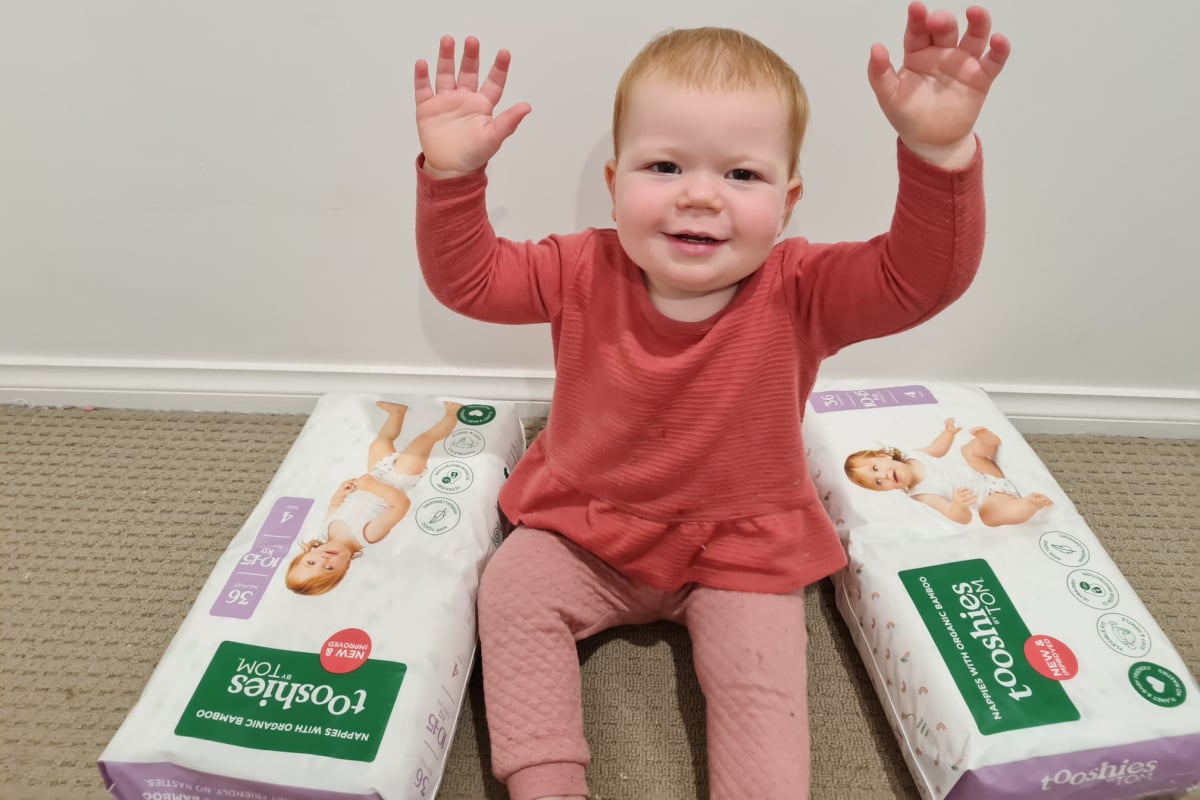 Not leaking yet? Nice one. Image: Amy Nelmes Bissett.

I'm not a doctor so I can't say for sure why this happened but here's a few scientific facts about Tooshies by TOM that might have helped beat the angry red. It's just our experience, so I can't speak for others, of course.

First up, bamboo nappies are more breathable, and incredibly absorbent, so that ensures it doesn't get too damp down there. That's just the nature of bamboo.

Secondly, Tooshies by TOM are naturally insulating and antimicrobial. And that means they naturally stop the growth of microorganisms. Or in less science speak, it keeps our baby's bums free of nasties during wearing.

So, after road-testing Tooshies by TOM, I can say that they definitely gets mine and Georgie's mark of approval.

A disposable that's not only good for the planet but performs perfectly for our babies. For us, it was a game-changer in helping with nappy rash - I won't go back to standard disposables.

Tooshies by TOM are available in Coles, Woolworths, Chemist Warehouse and via subscriptions online from thetomco.com. Every purchase of Tooshies by TOM supports their impact partner, The Babes Project, supporting women experiencing crisis pregnancy in Australia.

Have you used Tooshies by TOM? Let us know below.

Australian owned and designed by a team of mums, every purchase supports The Babes Project, supporting women who experience crisis pregnancy in Australia.