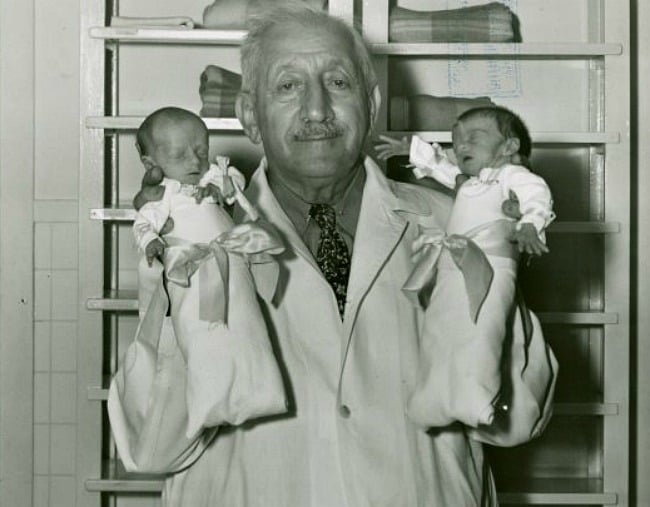 New York’s Coney Island is world famous as a place of sideshows and carnival revelry, but this Brooklyn attraction also played a bizarre role in the birth of a now-vital piece of medical technology.

For among the sword swallowers and bearded ladies that lined the boardwalk in the early 1900s, lay a particularly unique exhibit: hundreds of premature babies encased in small glass cribs.

For a fee of 25c, punters could gawp at row upon row of these tiny, fragile infants, as they struggled through their first weeks of life. At the entrance, a sign read, “All the World Loves a Baby”.

It was a freakshow attraction, yes. But this “child hatchery”, as its founder Dr Martin Couney called it, is believed to be responsible for saving the lives of as many as 7500 premature babies over its four-decade run and is credited as one of the first examples of a modern neonatal intensive care unit.

Couney was – and remains – an enigmatic figure. Born in Prussia in 1869, he emigrated to the United States and opened the exhibit at Coney Island’s Luna Park in 1903 using incubators imported from France.

Couney purported to be protégé of Pierre-Constant Budin, the French doctor who pioneered the technology in the late 1800s, but according to The Smithsonian, no evidence has been found to support this, nor is there any record of Couney’s claimed medical credentials.

Yet for reasons unknown, this layman took it upon himself to show the invention to the world, to prove its life-saving potential to the then-reluctant medical establishment.

At a time when the fate of premature babies in the States seemed resigned, Couney offered their families possibility. Many of the infants had been rejected by maternity wards, but at Coney Island a team of experienced (and qualified!) physicians, nurses and wet nurses cared for them around the clock, at no charge.

The early incubators used by Couney's team were made of steel and glass, and according to BBC, used a pipe of hot water running beneath the bed to keep the baby warm. This pipe was supplied by a water boiler on the outside, and the temperature was carefully regulated by a thermostat. Filtered air was pumped into the incubator and extracted via a fan through a small chimney-like device on top.

According to The Smithsonian, this came at a cost of US$15 per baby, per day, which is equivalent to more than US$400 today. At the time, it was the best care available for preemies in the United States, and among the best in the world.

Among those to benefit was Lucille Horn. Before she died in 2017, at the age of 96, the New York woman told NPR's StoryCorps how she was saved by Couney's team after being born weighing less than a kilogram.

“I couldn’t live on my own, I was too weak to survive... You just died because you didn’t belong in the world,” Horn said.

It was her father, who'd seen Couney's exhibit while on his honeymoon, who took her to Coney Island for treatment.

“The doctor said there’s not a chance in hell that she’ll live, but [my father] said, ‘But she’s alive now,’ and he hailed a cab and took me to Dr. Couney’s exhibit, and that’s where I stayed for about six months.”

Couney's exhibit later went on display at the adjacent Dreamland and in Atlantic City, as well as World's Fair in Chicago in 1933 and New York in 1939. By then, American hospitals were beginning to embrace the the technology and Couney was known nationwide as "the incubator doctor".

But not all were supportive.

Many within the medical community and children's charities saw him as little more than a showman and a charlatan, and made several failed attempts to shut his exhibit down. The New York Society for the Prevention of Cruelty to Children even repeatedly accused Couney of exploitation and endangerment, according to The Smithsonian.

Yet to thousands of American families, he was a medical pioneer, a miracle worker, a life-saver.

As another of the exhibit babies, Beth Allen, told the BBC, "Nobody else was offering to do anything to save me... Without Martin Couney I wouldn't have had a life."

His life story sounds like a movie waiting to be made. They really should.
I imagine that the bizarre arrangement of a baby exhibit on Coney Island was the means of funding it all, strange as it seems. Nowadays, it's something like $1,500-$2,200 a day per baby in NICU as best as I understand (depending on each baby's needs).

My son has something in common with Lucille. Born 95 years after her birth (in 1921) he arrived at 26 weeks (over 3 months early) weighing just 663gm (1 pound & 7 ounces), and had a 8.5-month long hospital stay. Props here to The Women's in Melbourne - the staff there are simply amazing! I wish they received more publicity, funding, and donations.

He came home on oxygen support. He no loner needs the oxygen, and he has a few expected development delays but getting lots of support, and is heading for his second birthday and is the happiest, most fun child you can imagine. And great sleeper - there's a silver lining for you.

So Martin Couney - thanks for your efforts so long ago!