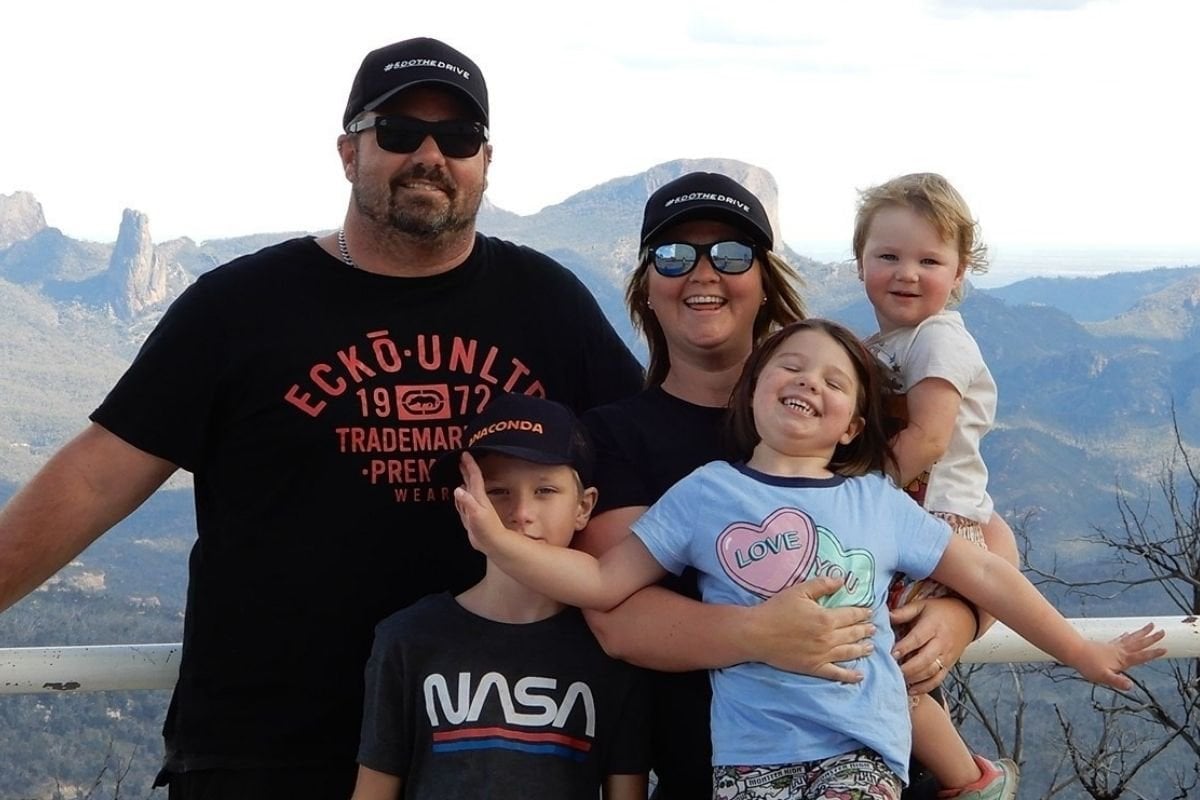 Elly Knaggs remembers the day she forgot who her children were completely.

"Why are these humans shrunk into miniature people?" she asked her husband, as she took refuge at the other end of the house, terrified.

"Are they yours? They're not mine! They must be yours," she told him as she peered into the living room at her children, then aged 11, six and three.

"I didn't even understand what a child was," the 35-year-old told Mamamia.

It had been five months of pain and confusion for the Knaggs family. Elly's children had watched their mum slip away into hallucination, delirium, strange aggressive outbursts and very nearly a coma.

Watch: Netflix's Brain On Fire is based on a true-story exploring the same condition. Post continues after video.

Elly had gone from being "fun mum", taking her family on the adventure of a lifetime around Australia in an RV, to someone who would sleep for 19 hours a day, scream uncontrollably and exhibit bizarre behaviour like trying to get her kids to gather blue bottles off the sand with their bare hands so she could "show them the anatomy of a jellyfish."

At first she was told she was suffering from an anxiety-induced 'pandemic breakdown.' It would take 10 doctors to find the truth.

Her autoimmune encephalitis diagnosis came just in time to save her life, but not soon enough to prevent her from permanent brain damage.

The day everything changed.

On April 1, 2020, Elly Knaggs woke up in Yamba where the family had set-up home for a few days in their RV after 18 months on the road, experiencing vertigo for the first time in her life.

She decided to take a nap, but when she woke up a new symptom had appeared.

"I woke to one of my husband’s favourite dishes, 'spicy soup'. When eating this dish I usually carry on like an idiot, grunting at how spicy he makes it and blowing my nose as the heat takes over. To my surprise, half way through the dish I realised I could not taste or smell the soup," she said.

Stroke was her first thought, followed very closely by COVID. Both were ruled out by the local doctor, who gave her a prescription for some vertigo medication.

At the chemist, things started getting weird. 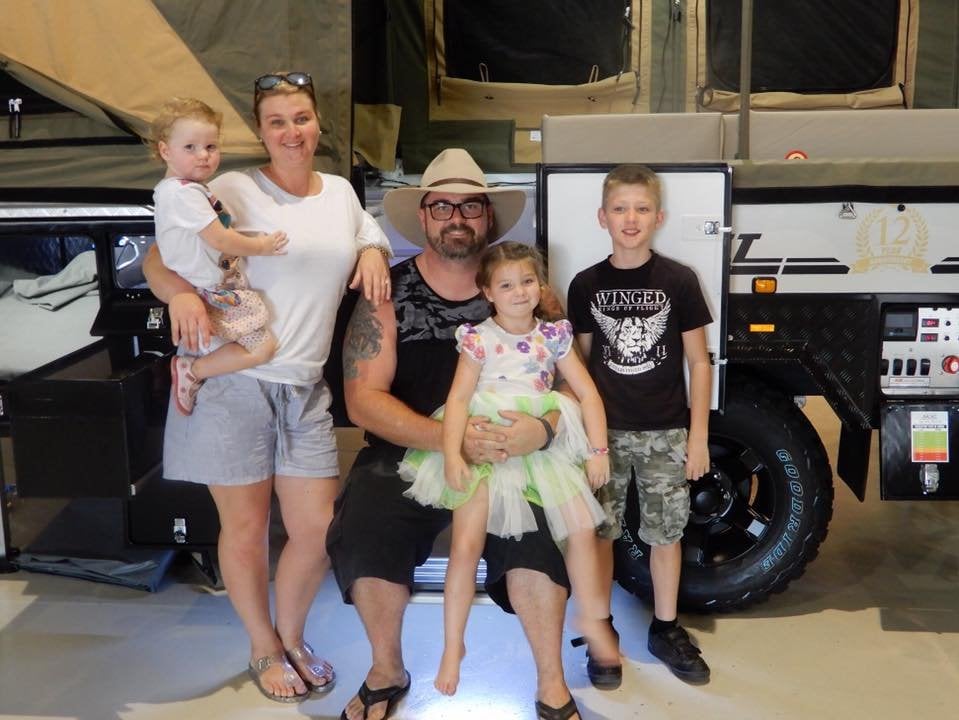 Elly and her family were on a trip of a lifetime. One day she woke up sick, and everything changed. Image: Supplied/5DoTheDrive.

"All I remember was the pharmacist coming up to me and saying, 'We do not tolerate behaviour like yours in this chemist. You need to leave'. And I remember thinking, what is he on about? What behaviour, I've just been standing here?'"

Apparently Elly had started swearing, spitting and acting aggressively inside the shop. She went straight to the hospital. Studying to become a nurse herself at the time, she knew something was very, very wrong.

There, she couldn't remember how to use her phone, let alone what her name or date of birth was. She had a blown pupil, drop foot, and she'd lost vision in her left eye. But alas, five hours after arriving she was discharged and told she was having a 'pandemic breakdown.'

"I spent five months fighting for my life."

It wasn't the last time Elly's symptoms would be dismissed.

"I just kept getting discharged," she told Mamamia. "Anxiety, depression, schizophrenia, bipolar, it was all labelled on me."

Eventually she was diagnosed with functional neurological disorder (FND), a problem with the functioning of the nervous system and how the brain and body sends or receives signals.

To Elly, that diagnosis made her feel like doctors didn't believe her and left her in a dark place.

"Nobody would listen, all hope had gone, and I wished that it would just take me... and I have never been suicidal in my life. I just wanted to die because I was in so much pain. My head felt like it was on fire. It felt like it was being suctioned. I had severe psychosis, it was such a dark, horrendous place to be in." 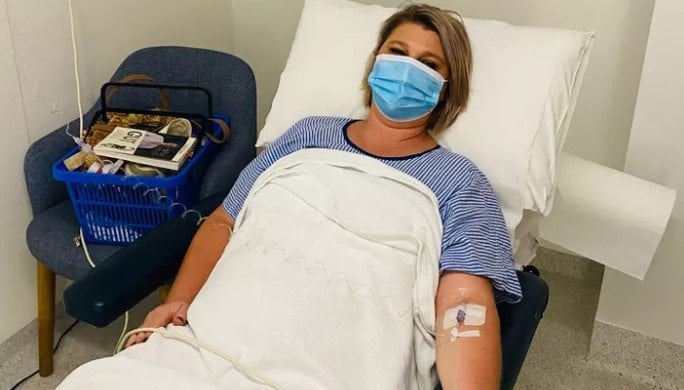 Elly went from travelling Australia with her family to being incredibly sick overnight. Image: GoFundMe.

The day Elly forgot who her kids were, five months in, was the scariest moment of all. That same day she had found herself paralysed on the couch for two hours, unable to respond to her husband as he talked to her.

In hindsight Elly now knows her body was slowly falling into a coma as her disease declined. She'd been so sick her two youngest kids couldn't even remember what life used to look like.

"Every picture they drew was of me in a hospital bed," she said.

Elly had agreed with her husband that she'd try one more doctor. One more before she checked herself into a psychiatric facility.

Finally, thankfully, that final doctor had a diagnosis: Elly had autoimmune encephalitis.

Even though her neurologist couldn't pinpoint how the Queenslander had developed it, Elly says she was "thrilled" to have a diagnosis and medication she was told would help it.

"The medication was difficult. For example, each day at 3pm I would scream the most horrendous things at my husband. I was convinced he believed I had gone mad and, in fact, didn’t believe I was actually sick. And each day my darling man would go and apologise to all that heard and knew of my erratic behavior," she said.

On a Tuesday morning, three weeks into treatment, Elly woke up feeling okay. It lasted the whole day.

"Days turned into weeks.... I had tears of joy as I began to gain my strength back. The brain fog had cleared, the delirium, dementia, confusion and vertigo had all gone. My cognitive abilities returned, and I managed to finally complete my nursing training and graduate," she said.

Elly is still not 100 per cent. Her doctor has warned it's the "hardest mountain you'll ever climb" trying to heal a brain injury completely.

"Right now, I cannot work in a high functioning job such as nursing due to the damage my brain has incurred," she shared. "So, I will put all things into perspective. Nursing is not my top priority yet. Getting well is."

Autoimmune encephalitis refers to a group of conditions that occur when the body's immune system mistakenly attacks healthy brain cells.

It's only been medically recognised for the past 13 years and Monash University estimates around 3500 Australians are living with the disease.

It generally occurs sporadically, in people with no family history of the condition. Causes range from a virus, bacteria, cancer or a tumour. In Elly's case, they simply don't know.

As Dr Mastura Monif, a Research Fellow for the Department of Neuroscience at Monash University explains, "People with autoimmune encephalitis (AE) are often misdiagnosed as suffering from a psychiatric illness, delirium or dementia. The condition can mimic many other diseases and hence there can be delays in diagnosis resulting in brain damage and a largely poor prognosis."

Monash is conducting a national clinical study into the disease in the hope of helping diagnosis and treatment options.

"If diagnosed early, and treated with steroids/immunotherapy, patients could be given back a potentially better prognosis,” said Dr Montif.

Currently, almost all patients with AE suffer long-term consequences from delays in diagnosis. Elly knows that all too well. She also knows it's not just the person with the diagnosis that suffers. 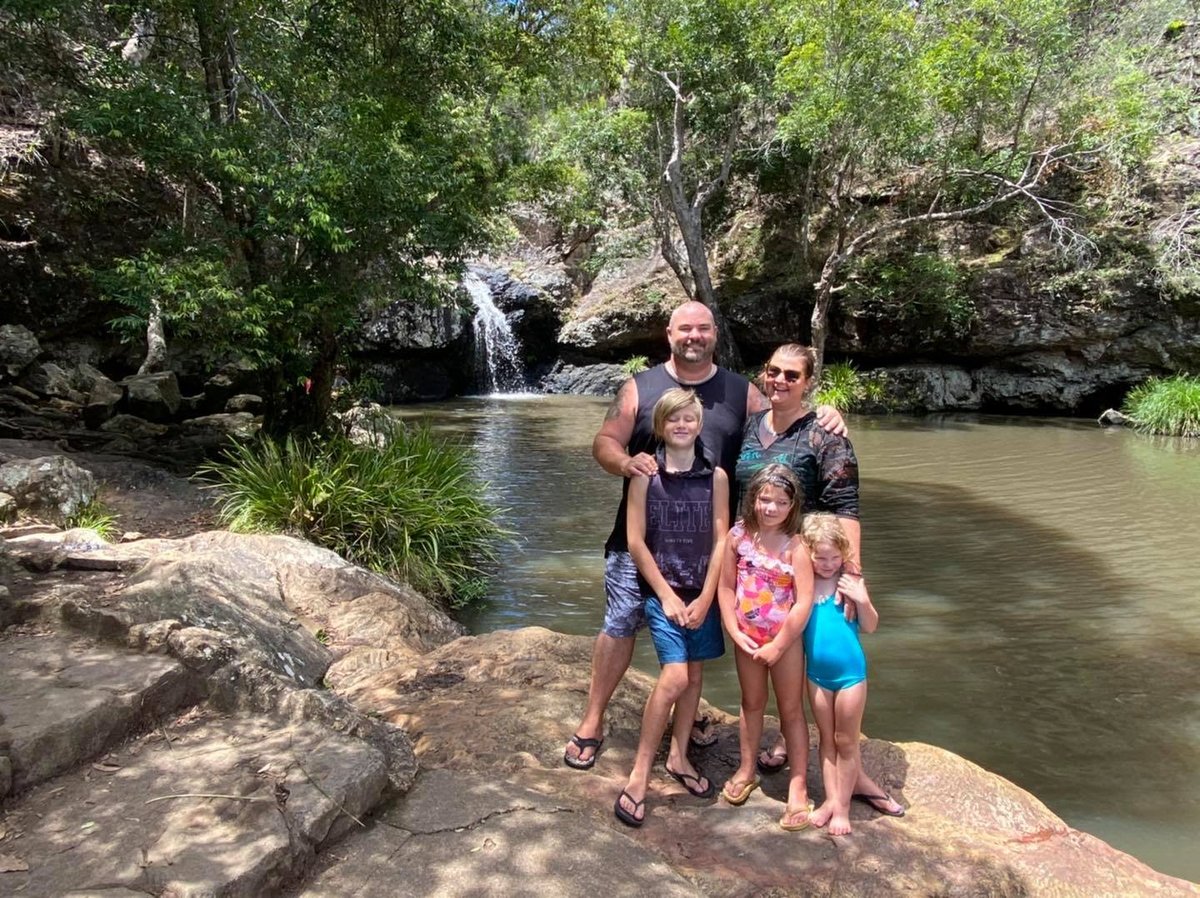 The entire Knaggs family has had to come to terms with Elly's diagnosis. Image: Supplied/5DoTheDrive.

"[My family] watched me fall apart over and over again. My husband who felt like he lost his wife. My children who felt they lost their mother. My mother who felt she lost her daughter."

One of the most tragic losses Elly has had to come to terms with is long-term memory loss. She can't remember the births of her children. Their first days of school. Family holidays - it's all wiped clean.

But she's come to terms with all of that now. She's focused on the future, and all of the new memories she's busting to make.

For more information on the Monash research, you can find that here.