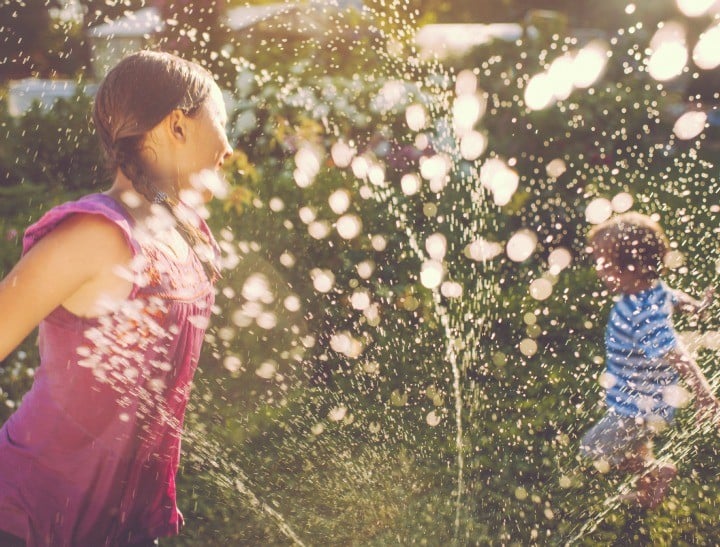 Thanks to our brand partner, Audiclean Swimmer's Ear

When you remember your childhood, you always remember the summers, don’t you? Those school holidays that seemed to stretch on forever. Long, lazy days, and evenings when it felt like the sun would never set. If you grew up in Australia, you probably remember these things…

● Running under the sprinkler. There were different types: the ones that went round and round, and the ones that made that t-t-t-t-t-t-ttttttttt noise as they went from side to side. Drip irrigation just isn’t quite the same.

● Drinking cordial. It was always more refreshing if it was bright green or bright red.

● Spiralling around on the Hills hoist. It was like having a roundabout in your backyard, and it wasn’t nearly as fragile as your mum seemed to think.

● The permanent face indentations of goggles and swimming caps.

● Remembering to restrict limbs and flesh to the cool water of sun soaked inflatable pools, lest you burn your skin on the blazing plastic edges.

● Getting badly sunburnt. Not just slightly pink, but so sunburnt that your skin would peel, sometimes in sheets.

● Getting sunburnt in a weird place, like the tops of your feet, except for a white V-shape where your thongs had been.

● Coming home from a beach holiday with an incredibly painful ear infection. Not quite the souvenir you would have chosen.

● The pools of water that collect in the butt of your speedos.

● Sticking to a bus seat or a vinyl car seat because you were sweaty.

● Winding down the car window in the hope of getting a bit of cool air blowing in your face. The car’s air conditioning just doesn’t cut it in the midst of an Aussie summer.

● Having a big group of kids on a trampoline. Little kids being sent flying when you got the timing of the bounce right. No sides or padding, of course.

● Burning yourself on a hot metal slippery dip, because no playgrounds ever had shadecloth.

● Hurting your bottom when someone got off the seesaw when you were up in the air.

● Going for a dink (or a double, depending on what state you lived in) on a friend’s bike. Helmets? They were only for serious cyclists, not kids.

● Opening the fridge door as if you were looking for something, but really just enjoying the cold air.

● Licking the last bit of a Paddle Pop in excitement, hoping the stick would reveal you had won a prize.

● Eating Neapolitan ice cream in a cone and wondering why they put vanilla in the tub when they could have just put in extra chocolate or strawberry.

● Eating ice. Or putting it down someone’s back.

● Burning your feet on the footpath or, even worse, on the bitumen.

● Running barefoot on the grass and stepping on bindi-eyes, or, if you were really unlucky, three-corner jacks.

● Sitting on the lap of a red-faced and sweaty Santa, who must have been sweltering under that red woolen suit.

● Gorging yourself on a heavy Christmas lunch of turkey with all the trimmings, even though Christmas was invariably a boiling hot day. Even if someone had put down a plate of prawns you probably wouldn’t have eaten them, because they looked weird.

● Getting splashed by that one kid who always had to do a bomb into the pool. Or, perhaps, being that kid.

● Obeying the warning to never go in the water for half an hour after eating, but not really understanding why. What was that all about?

● Getting buried in the sand at the beach. Or, even better, burying someone else – like your brother.

● Bringing home shells and sea sponges and all sorts of things from the beach, then finding later that something smelt
really, really bad.

● Waiting and waiting for your parents to get the photos from the holiday developed. Opening the envelope in excitement, only to find that you had your eyes closed in most of the photos.

What are your summer childhood memories?

The pain of a blue bottle sting!!

This is beautifully written and I can certainly relate to much of what you say. However I have seen a lot of these articles lately and it seems to me that the more frightening and challenging the world becomes, the more people seem to want to cling to the past. I am not sure this is entirely healthy. The past is another country, as my nan used to say. The world is changing and I think one of the most challenging things for Australians going forward will be finding ways to embrace that change (something I don't think we are especially good at). It is also important to remember that not everyone had a wonderful childhood in Australia. That is the danger of spending too much time looking back, there is a tendency to romanticise the past. Articles like this are important, but I think we need more articles celebrating what is good and beautiful about Australia (and the world) in 2015.