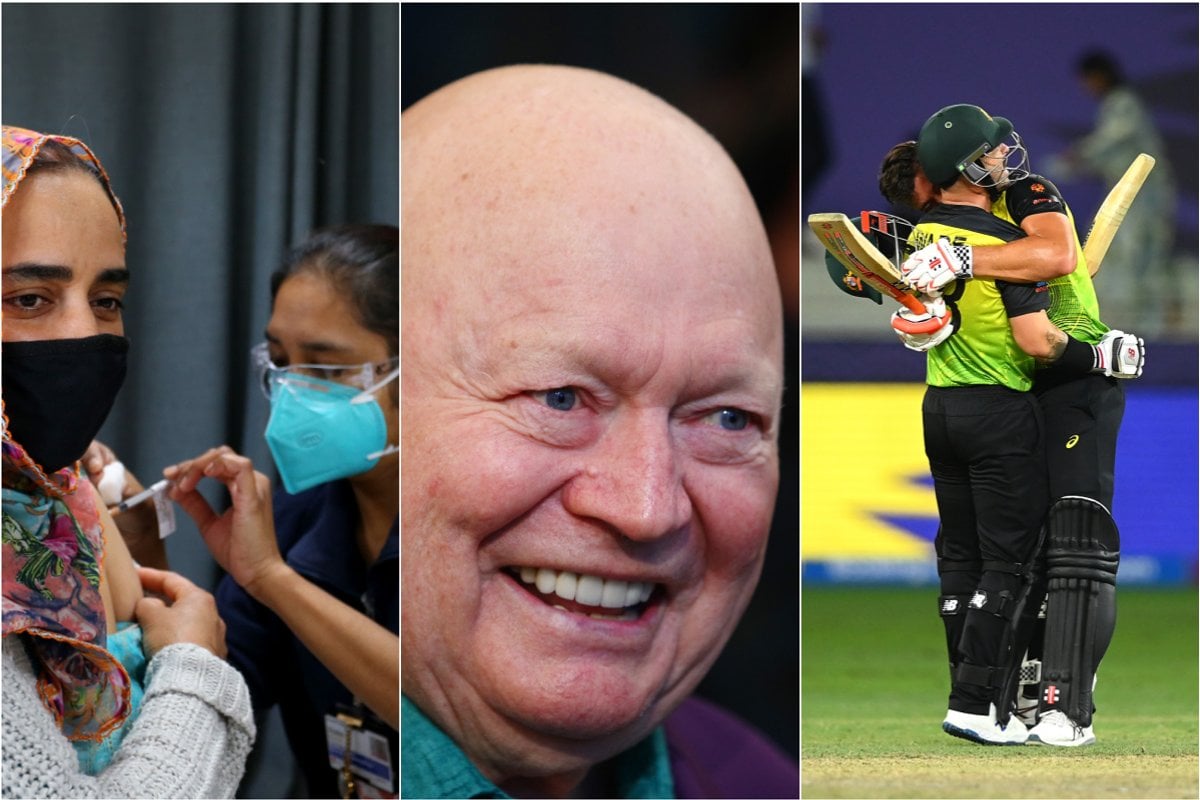 Medical experts have warned Australians not to let their guard down on COVID-19 despite rising vaccine rates and better than predicted case numbers.

As Australia on Thursday surpassed the 90 per cent first-dose vaccination rate for people 16 years and over, Medical Journal of Australia editor Nick Talley said hospital systems were coping well with eased virus restrictions.

"Most of the models predicted much worse case rates and hospitalisations were suspected to go higher and that hasn't happened because the vaccination rates have been so high," Professor Talley told Sky News on Thursday.

Australia has reached a lofty vaccine milestone in what the health minister has described as an “extraordinary” achievement. #7NEWS https://t.co/TPalQRRv1X

"We've hit a sweet spot at the moment, but we can't let our guard down, but things are good at this stage."

Professor Talley said the health system was not completely out of the woods, warning a surge in COVID-19 cases could lead to a rise in hospitalisations.

"In NSW, things are going reasonably well, but Victoria is more stressful," he said.

Health Minister Greg Hunt said the national first dose rate passed the 90 per cent mark on Thursday afternoon, a milestone he said was an "extraordinary achievement".

While most jurisdictions are easing COVID measures, parts of the Gold Coast could be subject to new restrictions.

An Uber driver on the Gold Coast who was infectious in the community for three days was one of two new COVID-19 cases reported in Queensland.

Meanwhile, there were 261 infections and one death in NSW, while 1313 cases and four fatalities were detected in Victoria.

The ACT, which is set to ease some of its last remaining COVID restrictions, registered nine cases on Thursday.

This post deal with sexual assault, and could be triggering for some readers.

NSW is likely days away from a historic reform to its sex laws, introducing a requirement that consent is communicated by words or actions.

Debate on the government's bill to reform the Crimes Act will begin in the upper house of NSW parliament on Friday after the lower house signed off on the law on Wednesday evening.

Saxon Mullins, the young woman whose traumatic experience was the catalyst for the years-long reform process, told AAP watching the debate unfold has been "almost indescribable".

"I'm just so pleased of course that this has gone through," she said.

"It's a bit overwhelming. In a way (I'm) shocked that it's finally ... close to done. It feels really nice to know that it had so much support in the parliament."

Ms Mullins' horrific sexual encounter in 2013 in a Kings Cross laneway, followed by two criminal trials and appeals that resulted in the accused walking free, prompted NSW Attorney-General Mark Speakman to order a review into the state's consent laws.

In May, he announced he would go a step further than the NSW Law Reform Commission recommended and introduce the "affirmative consent" model.

The bill has the general support of the government, Labor and the Greens, all but assuring its passage through the upper house.

However, the Greens will be proposing an amendment to narrow the bill's exception for people with mental health impairments, which it says could let people with conditions like anxiety off the hook.

Hundreds of family and friends will farewell entertainment legend Bert Newton at a state funeral in Melbourne on Friday, which will be broadcast live.

The man affectionately known as "Moonface" died aged 83 on October 30 at a private Melbourne clinic after his leg was amputated in May due to a life-threatening infection.

Friday's state funeral will be held at St Patrick's Cathedral in East Melbourne from 10am, for up to 500 guests.

While the public will not be able to attend due to COVID-safe requirements, the service will be streamed online and broadcast live on television networks Nine, Seven and Ten.

Melbourne-born Newton started in the radio business aged 12 and scaled the heights of Australian entertainment on stage and screen.

Several Melbourne theatres dimmed their lights for one minute at 7.30pm on Thursday to honour Newton's contribution to the industry.

A very subtle but touching nod to TV and theatre legend Bert Newton, lights dim for 1 minute at Melbourne’s major theatres. His state funeral will be broadcast live on ⁦@morningshowon7⁩ tomorrow at 10. pic.twitter.com/wmmSBoXwJ7

Newton is survived by Patti, his wife of more than 46 years, children Lauren and Matthew, and grandchildren.

NSW and QLD are in for another day of heavy rain and thunderstorms ahead of conditions predicted to ease over the weekend, as some parts receive more than a month's worth of rain in a matter of days.

The Bureau of Meteorology has warned sheep graziers around NSW the weather may be so bad that their stock might not survive the day.

Colder temperatures, showers, and gusty west to northwesterly winds are expected around the state on Friday, continuing a cold and wet week that has delivered intense rainfall and thunderstorms.

Eastern Australia is in the path of a low-pressure system, with Queensland and New South Wales being battered by heavy rain, hail and gale-force winds. #9Today pic.twitter.com/oYz20ZLPqf

On Thursday Dubbo was hit with 40mm, with most of it falling in just 30 minutes.

The heavy rain trapped an empty school bus and three 4WD between two fast-rising creeks near Narrabri on Wednesday afternoon, however the SES was "heartened" to see they called for assistance and did not try to drive through the floodwaters.

In Bingara, the SES ferried stranded holidaymakers out of a flooded caravan park

Tibooburra, near the NSW, South Australia and Queensland borders, was hit with a 104km/h wind gust shortly after midday on Thursday, which also brought an intense torrent that dumped 13mm of rain in 20 minutes.

Some world leaders and internet giants are expected to issue a global call to better protect children online during a Paris summit gathering of about 30 heads of state and government, the French president says.

"Protecting our children and teenagers online means taking them away from inappropriate or dangerous content, from violence, hatred and pornography," French President Emmanuel Macron tweeted.

He called on countries, organisations and companies to "make concrete commitments for 2022" on the occasion of the Paris Peace Forum.

The Elysee said about 450 participants are expected at the three-day summit, while 15,000 others will attend online.

The summit brings together world leaders, CEOs, NGOs and others to discuss global issues such as climate, the COVID-19 pandemic and the digital transition.

It will mark a "starting point" on taking concrete action including enforcing parental control on digital tools, protecting children from inappropriate content and preventing cyber-stalking, prostitution and child pornography, the official said.

- Australia sought to scrap a reference about limiting global warming to 1.5C from a key United Nations document about protecting world heritage sights.

- Four astronauts are on their to the International Space Station after a successful launch for the latest NASA-SpaceX mission.