It has been announced that a referendum is in the works to enact an Indigenous Voice to parliament.

And over the weekend, Prime Minister Anthony Albanese detailed the proposed question Aussies would be asked to vote on.

The question that could be put to Australians is: “Do you support an alteration to the constitution that establishes an Aboriginal and Torres Strait Islander Voice?”

The current constitution does not even mention Indigenous Australians. Support for enacting the Indigenous Voice to parliament is currently strong (65 per cent say they would vote ‘yes’ according to an Australia Institute survey).

Albanese said details about the Voice, such as its function and how it operated, would be worked out following consultation. He said it would only act as an advisory body and not as a third chamber of parliament.

The fundamental aim of the Voice is to make Aboriginal communities safer and close the gap between Indigenous and non-Indigenous Australians. While a timeline for the referendum has not been finalised, Labor reportedly prefers holding the vote next year. 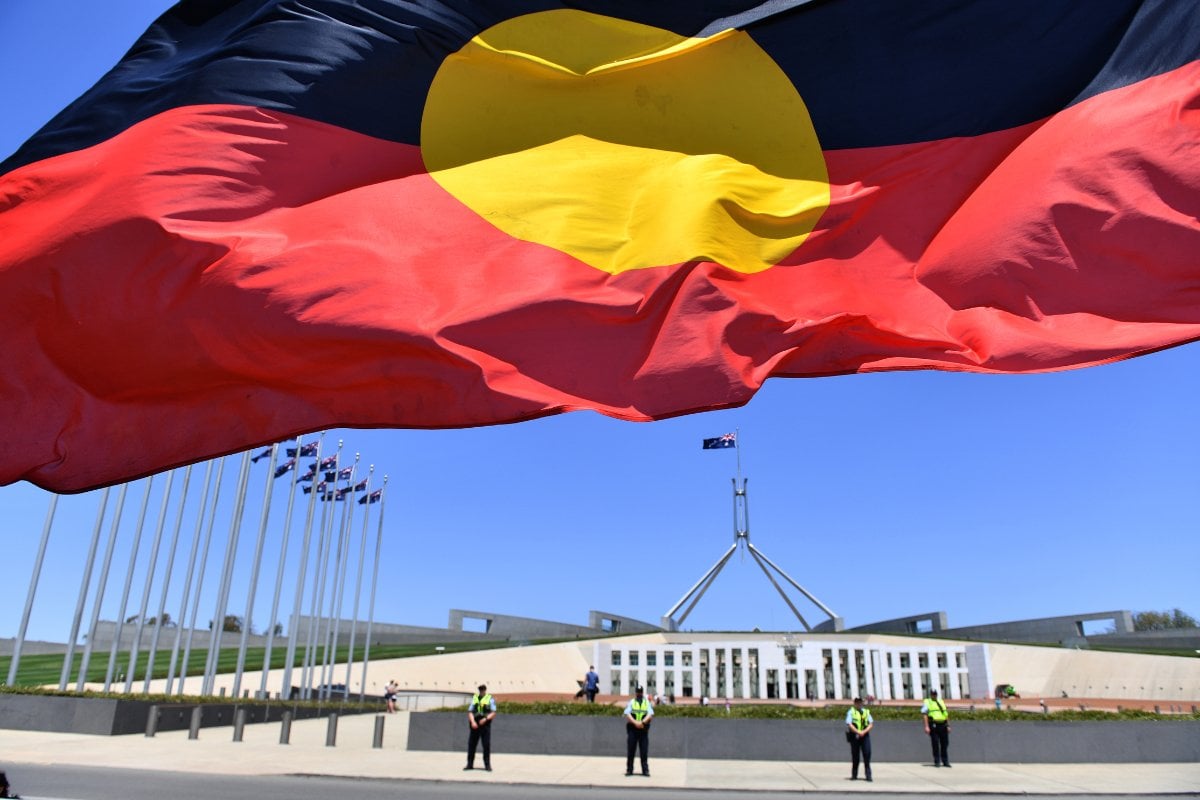 Burney noted there was an “overwhelming” sense of excitement in the Indigenous community for the Voice. While Burney said the process to enshrine a Voice in the constitution would not be rushed, now was the time to act.

“A Voice to the parliament means that Aboriginal and Torres Strait Islanders will be consulted and heard on policies that affect them, practical outcomes that will make a real difference to people’s lives.”

Burney said previous work about the Voice by Aboriginal leaders would not be jettisoned and would be part of the government’s consideration.

First Nations Country Liberal Party senator Jacinta Nampijinpa Price has branded the bill “virtue signalling” and called for more practical action. “This bill is an unnecessary distraction from the important work that needs to be done that we as a coalition have invested heavily in,” she said.

As for Greens First Nations spokeswoman Lidia Thorpe, she welcomed the referendum and wanted all elements of the Uluru Statement to be enacted.

However, she called on the government to implement a treaty with Indigenous people and to follow through on all recommendations from the royal commission into deaths in custody.

The trial of former Melbourne principal Malka Leifer has been delayed.

The 55-year-old is accused of sexual offences that allegedly happened while she was the principal of the Adass Israel School in Melbourne's eastern suburbs. She has pleaded not guilty to the charges and is due to stand trial in the County Court.

The planned five-week trial before Judge Mark Gamble was expected to start on Wednesday but has instead been postponed to August 22. Pre-trial arguments before Judge Gamble continue.

The real reason for Will Smith’s new apology video.

Beyoncé’s highly anticipated seventh studio album Renaissance has been released into the wild and it’s already broken some pretty impressive records. But with the album's release comes a new wave of controversy.

Plus, following the Kylie Jenner double private plane backlash, a list of the worst private jet CO2 emissions from celebrities in 2022 has been released with Taylor Swift topping the list and then defending herself in a statement. But there’s a stronger power at play here that will let all these celebrities off the hook.

And Will Smith has released a new apology video in regards to slapping Chris Rock at this year’s Oscars. In the video, he once again apologises to Chris Rock, who has since given an under-the-radar response, but now we need to talk about the mechanics behind the video and why he really chose to post it.

Get The Spill in your ears now!

Aussie swimmer Emma McKeon makes history, and all the news you need to know this morning.

Welcome to your live news feed for Monday August 1.

It's the start of a new week (and a new month) so let's jump right in and get you up to speed with biggest news stories you need to know this morning.

"There's so many great athletes before me that kind of lit the fire in me when I was a young girl watching them on TV," McKeon told Sunrise.

"When I was watching the swimming that's what I was seeing. I was seeing these great achievements, I was seeing so much emotion from them behind it, showing how much work they had put into it. That's really what lit the fire in me and got me to where I am now."

Swimming superstar Emma McKeon has etched her name into the history books after winning her 11th Commonwealth Games gold medal.

There was also a gold rush for our Aussie cyclists during a dramatic day at the velodrome that saw an English rider fly into the crowd. pic.twitter.com/kqaKSUL81U

Australia is currently topping the medal charts at Birmingham, after winning 52 medals, including 22 gold.

Prime Minister Anthony Albanese has announced the proposed referendum question to enshrine an Indigenous Voice to parliament at the Garma Festival in northeast Arnhem Land.

The question that could be put to Australians is: "Do you support an alteration to the constitution that establishes an Aboriginal and Torres Strait Islander Voice?"

The details of the Voice, its function and how it operates will then be worked out following consultation, Albanese says.

Today at the Garma Festival I am outlining how the Government will bring our commitment to the Uluru Statement from the Heart to life. pic.twitter.com/1sUi7AnjY7

"One of the things I'm trying to avoid - as occurred at the end of the last century when a referendum wasn't successful - is people looking for all of the detail and saying well, if you disagree... with one out of the 50 (clauses) but 49 are OK, vote no," he told the ABC's Insiders program yesterday.

"We're not doing that. We're appealing to the goodwill of the Australian people... That's why I am optimistic that Australians will embrace this simple concept that where issues affect Aboriginal and Torres Strait Islander people, they're consulted."

Albanese recommended adding three sentences to the constitution: A body to be called the Aboriginal and Torres Strait Islander Voice; the Voice may make representations to parliament and the executive government on Indigenous matters; and the parliament shall have the power to make laws on the Voice's composition, functions, powers and procedures.

Five capital cities have experienced a decline in housing values in July, as prices drop at their fastest pace since the global financial crisis.

Sydney experienced the biggest monthly drop in prices with a 2.2 per cent decline.

Prices fell 1.5 per cent in Melbourne and Hobart, 1.1 per cent in Canberra and 0.8 per cent in Brisbane, marking the first time the Queensland capital has gone into the red in two years. Perth, Adelaide and Darwin bucked the trend, recording monthly growth rates of between 0.2 and 0.5 per cent.

CoreLogic research director Tim Lawless said the rate of decline in property prices was comparable to that at the start of the global financial crisis in 2008, while Sydney was seeing the sharpest drop in prices in nearly 40 years.

He also said house price growth was already slowing before recent interest rate rises, but markets had weakened sharply since the first rate hike in May.

"Due to record high levels of debt, indebted households are more sensitive to higher interest rates, as well as the additional downside impact from very high inflation on balance sheets and sentiment."

Economists expect the Reserve Bank of Australia to lift interest rates by 50 basis points to 1.85 per cent this month after annual inflation came in at 6.1 per cent in the June quarter, the fastest yearly increase in more than 20 years.

US President Joe Biden has tested positive for COVID-19 again in what the White House doctor described as a "rebound" case, seen in a small percentage of patients who take a type of antiviral drug.

Biden, 79, who emerged from COVID-19 isolation on Wednesday after testing positive on July 21, will return to strict isolation and cancel planned trips to his home in Wilmington and a work trip in Michigan, the White House said.

Biden tweeted about his positive case, saying it can happen to a "small minority of folks." He later posted a video on Twitter where he said he was "feeling fine" and "everything's good".

This happens with a small minority of folks.

I’ve got no symptoms but I am going to isolate for the safety of everyone around me.

I’m still at work, and will be back on the road soon.

Biden's positive test is believed to be a "rebound" experienced by some COVID-19 patients who take the anti-viral drug Paxlovid, according to White House physician Kevin O'Connor.

The forced isolation came as the White House was hoping to celebrate some recent legislative victories to help boost Biden's slumping poll ratings.

5. Princess Charlotte appears in a rare video with Prince William.

Princess Charlotte has made a rare video appearance with her father Prince William to wish England's football team good luck in the Euro 2022 women's final.

In the video, shared by the Duke and Duchess of Cambridge on Instagram, William says the pair "both want to wish the Lionesses the best of luck for tonight".

"You've done amazingly well in the competition and we're rooting for you all the way," he continues.

Seven-year-old Charlotte then chimes in, adding "Good luck, I hope you win. Bye!"

A good luck message for the #Lionesses in the #WEURO2022 final from FA President Prince William and Princess Charlotte.
Vides via @KensingtonRoyal pic.twitter.com/443FjKsdWb

The team have since made history, winning their first major women's tournament by beating Germany 2-1.

And that's it, you're all up to speed. We'll be back to bring you more of the top stories throughout the day.

Who are the people who decide interest rates go up?

There's been a lot of headlines lately centreing around rising interest rates and the ways our country is attempting to handle inflation.

Have you ever wondered who the people making those decisions that affect so many Australians are?

In today's episode, we take a look at the members of the board of The Reserve Bank of Australia. We'll tell you who they are, and how they got there.