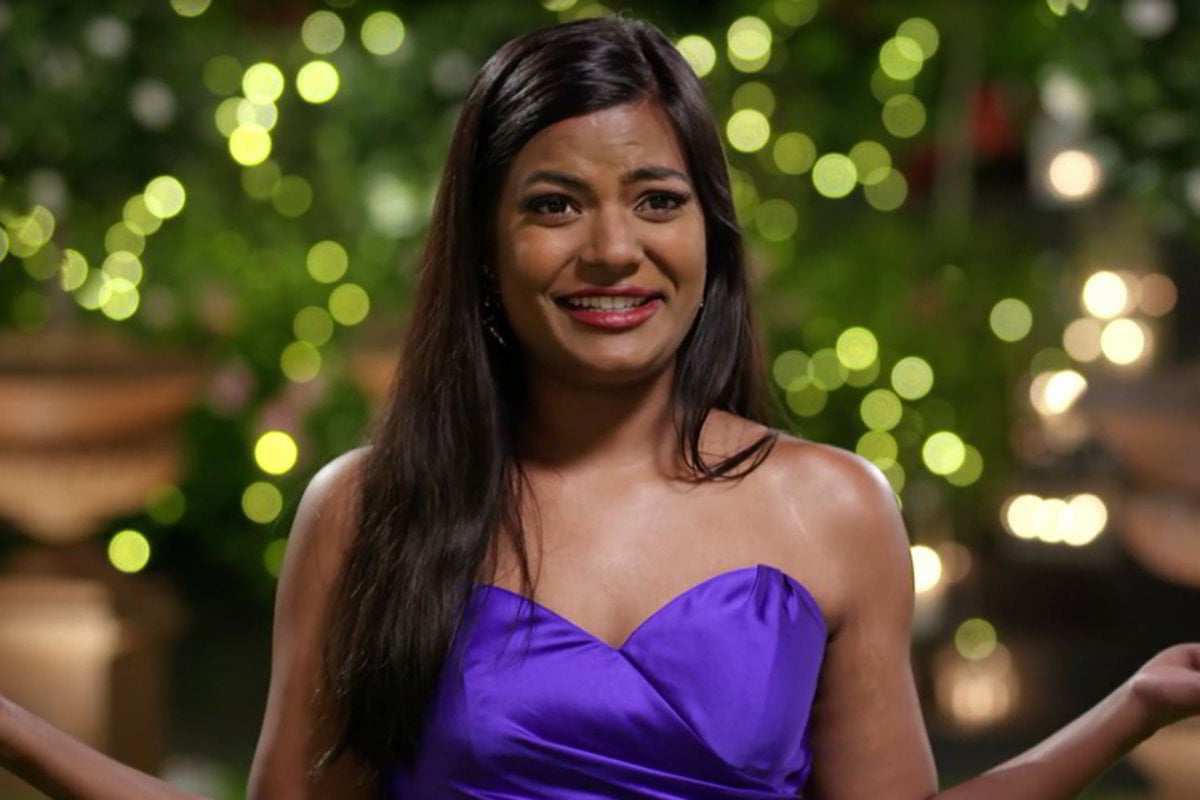 Areeba had every intention of stirring the pot when she entered The Bachelor mansion.

She's the type of person who's not afraid to say what everyone else is thinking. She's also not scared to stand up for herself.

From the very first cocktail party, the 25-year-old became a key player in this season's drama. She interrupted Zoe-Clare's chat with Locky and was just as confused as the rest of us when that drama climaxed with Zoe-Clare accusing her of discriminating against her hair colour.

WATCH: Zoe-Clare's bizarre meltdown on The Bachelor. Post continues below.

"I had no idea interrupting that one chat would lead to all of that. No one mentioned anything about the colour of her hair that day. I don't know what happened," she told Mamamia after her eviction on Wednesday night.

"Especially to someone like me as well. Like, come on, man. You just don't do that. It was wrong on so many levels."

While Areeba was surprised that moment was such a big storyline, she was more astonished at how quickly she was labelled a 'villain'.

"I wouldn't look at myself as a villain. I wouldn't. If being outspoken and saying how you feel makes you the villain, then that's fine, I'll take that," she said.

Despite the harsh criticism the home loan officer received both in the house and online, she's standing by everything she said and did on the show.

"For me it wasn't like I was trying to be the villain. There are so many articles like 'she wants to be the villain'. No, this is who I am, what you see is pretty much me. It was a little too much but at the end of the day it's a reality TV show and there's always going to be stuff added in," she explained.

"But pretty much it is me and I'm going to own up to it and say yeah I get it all."

The thing Areeba can't look past is how differently she was treated to the other 'villains' on the show.

Areeba owns what she did in the house. She interrupted chats. She had a public falling out with one of her friends. And was quick to bite back whenever she was attacked.

Looking back, her 'crimes' seem minimal in a mansion where women were calling each other b*itchs and sl*ts and making derogatory comments about each other's appearance.

"I know what I said. To me, I was actually having a lot of fun and the things I said were really sarcastic and just a lot of fun. But there are girls in the house that actually said a lot of bad things, they name-called people," Areeba explained.

"How is no one talking about that?" she asked.

"I'm actually really shocked. If I did what some of the girls are doing in the house right now, and I'm going to say this with no regrets, if I did anything like that, and there's one girl in particular, if I was that girl and I said those things, I would be hated so much.

Areeba didn't want to name names, but anyone who's watched the season could figure out who she's referring to.

Laura, who was the season's self-appointed commentator, was quick to call the other women "b*tches", and to comment on their appearance. During one cocktail party she said having a conversation with Juliette was like being on an "overseas phone call".

Roxi said the "b*tch was a sl*t" after Kaitlyn kissed Locky at the cocktail party. She then called her "Gold Coast trash" and yelled about her "fake tits, lips, and hair".

LISTEN: We need to have a word about the sl*t-shaming on The Bachelor. Post continues below.

Areeba doesn't know why she was treated so differently to the other women in the mansion, but it's something she's been thinking about a lot while she's been watching it all play out on TV and on social media.

Areeba has now left the mansion and the show, and in a few days the news cycle will move on from her. She will become another person we passionately commented about for a few brief weeks.

But maybe this time we'll look back and think about why Areeba's experience was so different from Roxi's, Laura's and that of the other big personalities in the house.

Why do some people get a stronger reaction from us while others get a free pass? Is it just the power of reality TV editing or is there something deeper going on here that we need to examine further?

The Bachelor continues tonight at 7:30pm on Channel Ten.