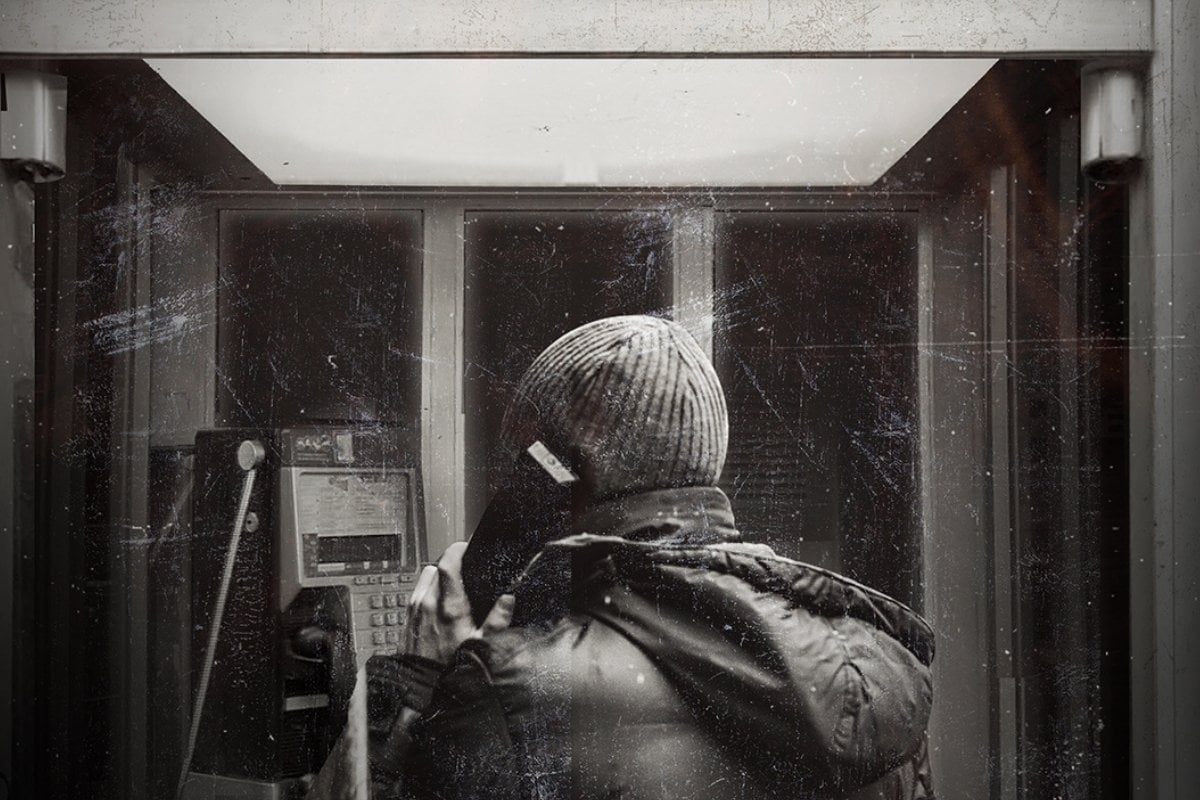 "Attention amateurs, professionals, criminals, blue collar, white collar. You have wronged people. It is to people you must apologise... Get your misdeeds off your chest! Call Apology."

So read the posters plastered across New York City in 1980.

It was the beginning of a bold social experiment created by local artist Allan Bridge using what was then new technology: the answering machine.

Thousands of people availed themselves of the opportunity to confess their transgressions, anonymously and without repercussions. 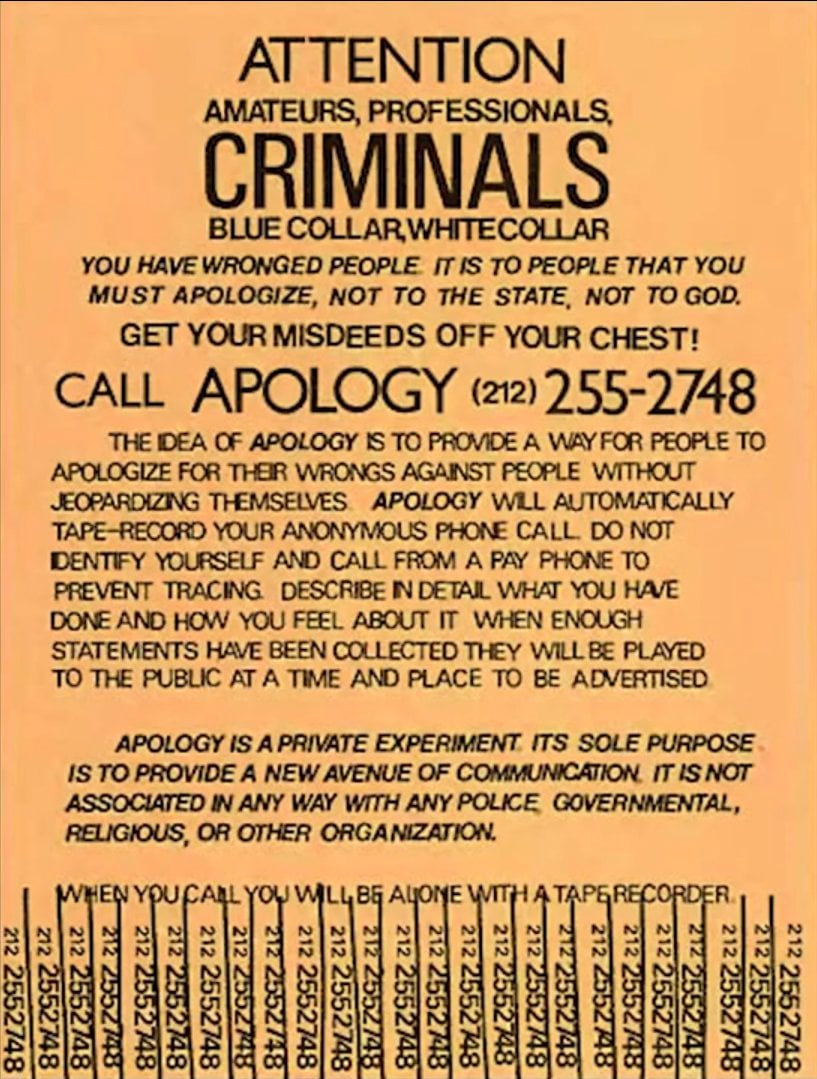 In 1983, Allan started playing select calls on the telephone confessional's outgoing message, meaning all who dialled the number could hear and respond to them. It turned the 'apology line' into a sort of rudimentary forum, allowing a dialogue between callers.

Among them were adulterers. Petty thieves. Cheats, cons and gamblers. People who'd wronged friends or family. And murderers.

It was them who intrigued Allan most. At one point, he left a message of his own using the pseudonym Mr Apology. Addressing those "who've done bad things", he asked if they lived their life according to some sort of code, whether they felt they were making a positive contribution.

"It was a different kind of fear." Life with Mr Apology.

Lured to the line by Allan's question, the man who called himself Richie answered in a low, slow, monotonous voice. There was no code, he explained. He killed purely for pleasure.

"It's very difficult to describe. It's a real high. My body is alive, every piece of me I know exists at that moment is [alive] when I'm with somebody who's tied up, who's in great pain and who I have complete control over."

This man, who said he was a banker, claimed to prowl New York streets looking for young gay men to take back to his apartment where he'd torture them for several days and kill them. He said his victims were often drifters, homeless people, men whom the world wouldn't look for until long after they were gone. He claimed there had been more than two dozen of them — "and counting".

Richie called his crimes his "hobby", his "perversion"; an urge that swelled in him from time to time until he couldn't ignore it any longer.

As explored in the Wondery podcast, The Apology Line, this man got into Allan's head in a way that no other caller had.

The series, which is hosted by Allan's wife, Marissa Bridge, captures the story of his experiment, including how Richie lured Allan into back-and-forth discussions via apology line messages in which they debated ideas of morality, the line between ideation and action, and the biology of human evil.

Speaking to Mamamia's True Crime Conversations podcast, Marissa recalled how Richie even sent Allan lurid photographs of what appeared to be victims.

"We were never sure whether those photographs were staged, or actual real victims," Marissa said. "He sent drawings of very nasty things that he had done — very terrible drawings. But he never sent more conclusive proof. And Alan didn't want him to, because he didn't want Richie killing someone just to send proof."

Allan hoped their dialogue, his search for the humanity in this apparent monster, would distract Richie from finding his next victim.

But then came another confession via the line.

"Just for the record, his name was Mitchell," Richie said. "He was a hustler that I picked up at Port Authority on Friday night... He lasted until midday." 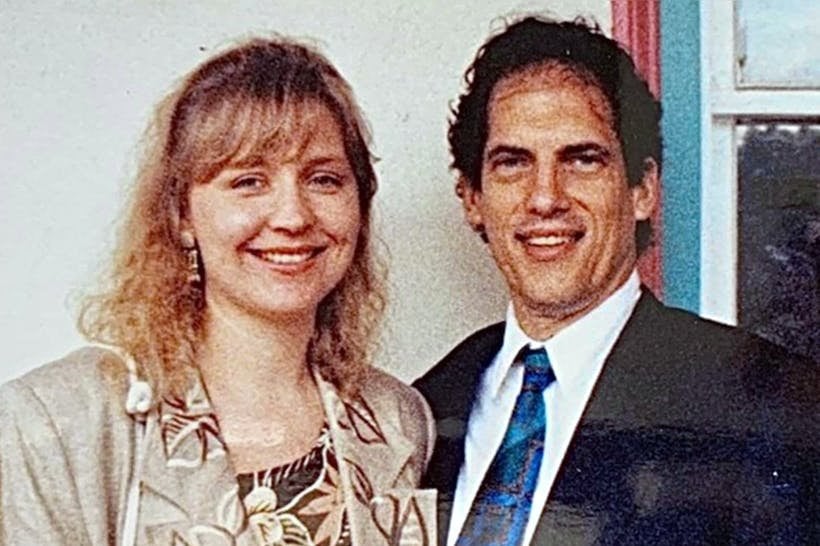 So invested was Allan that, against the detective's wishes, he used what information they'd gleaned to pursue Richie himself. He drove past what they believed to be his house and went to the Port Authority bus terminal in search of him.

Allan's involvement in the case frightened Marissa far more than the prospect of Richie harming them. She figured that was unlikely given how much Richie seemed to relish Allan's attention.

"What I was afraid of more was of Alan's psychological involvement and emotional involvement with Richie," she told Mamamia. "It was a different kind of fear. And it was a more real fear, in a sense, because Alan did go down the rabbit hole.

"He would read books about understanding the criminal mind and understanding the psychopath and all these really heavy books... He just got very emotionally involved. And it was really hard for him to come back from that."

Eventually, the calls from Richie stopped. And in 1995, after 15 years and thousands of calls, so did the apology line. In August that year, Allan was fatally struck by a jet ski while scuba diving in New York, and the project was put to rest.

It wasn't until years after Allan's death that Marissa learned the outcome of Ray Pierce's investigation into Richie.

That revelation marks the unsettling conclusion to The Apology Line podcast. We shan't be spoiling it here, except to say that, fittingly, it involves a confession. But this time, one given to police.

For Marissa, the power of confession, the release of it, is among the biggest lessons she learned from her late husband's project. But even more evident than that, she said, was just how similar we all are.

"I think that's the primary message of The Apology Line. And aside from that, it's: forgive people that have harmed you. And if you're the person that's done the harming, please, apologise."

To find out more about Marissa, Allan and The Apology Line, listen to True Crime Conversations below or via your favourite podcast app.