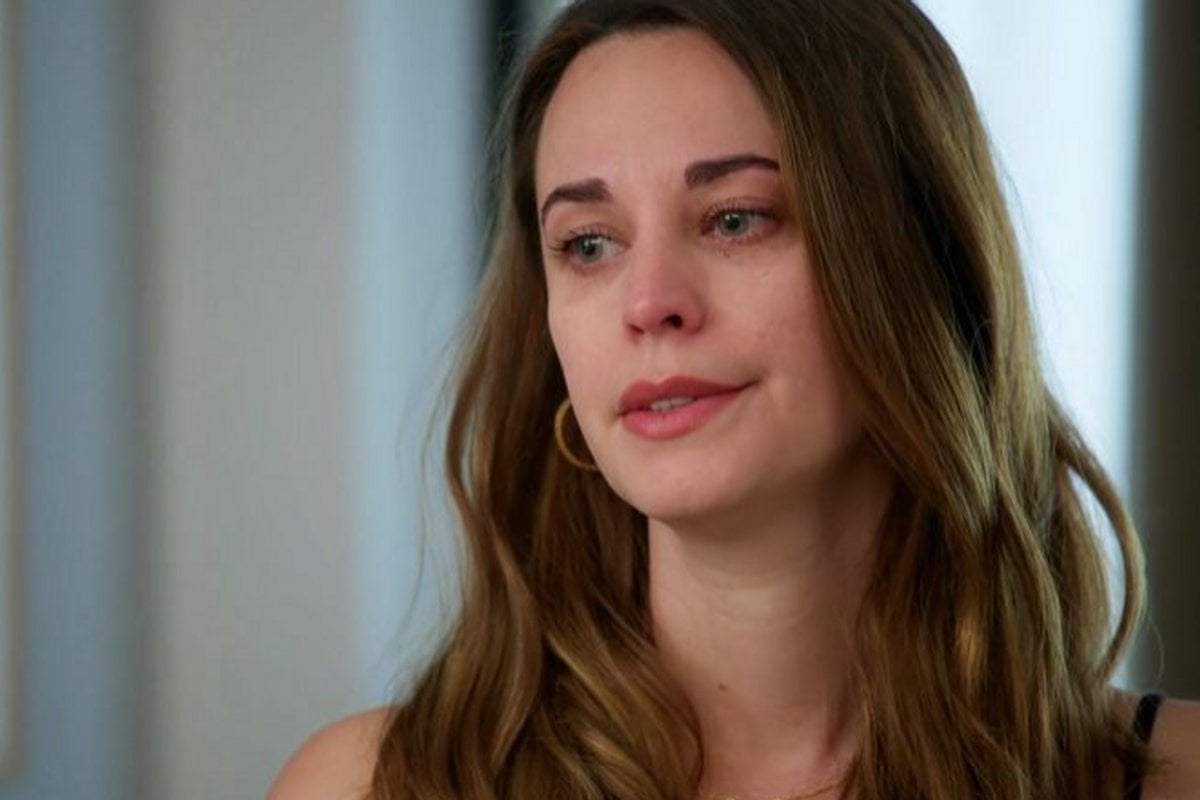 I promised myself that this year I wouldn't get sucked into Married At First Sight.

I made this promise because I'm bloody tired after dragging myself through the last two years of the pandemic. I have very little energy left and the mere thought of watching grown adults throwing glasses of wine at each other, sucked the last bit of life out of me.

Yes, it's ratings gold. It's a cleverly made TV show, and under all that manufactured drama, it holds up a mirror to society and probes our deepest fears and insecurities.

It also teaches us stuff. Like what gaslighting and coercive control looks like. And what not to say on national TV if you'd ever like to live in peace.

But it's also exhausting. And I'm very busy trying to explore all the seven types of rest and figure out why I constantly have hip pain now.

Watch the trailer for this season of Married At First Sight. Post continues below.

Then last night I relented and watched an episode.

And it broke my heart a little.

It tapped into a fear I never talk about, a fear a lot of women around my age are quietly dealing with. A fear I hope to never see played out on a reality TV show for cheap ratings ever again.

In case you missed it, last night's episode dug deeper into the relationship between Andrew, the Texan with a touch of the Donald Trumps, and Holly, the 36-year-old who desperately wants to have a baby.

As part of a confession week challenge, Andrew and Holly had to confess their biggest secret to each other.

Andrew went first and told Holly he's had at least 350 sexual partners and is quite good at sex as a result. Leaving aside the fact the first thing doesn't necessarily lead to the second, Andrew's confession was a bit of light fun.

He'd run the numbers to come up with the 350 figure, calculating that he had been single for seven years of his life, and had on average a new sexual partner each week of those seven years.

It was brilliant reality TV, guaranteed to generate countless headlines, recaps, and memes. The stuff MAFS has become famous for over its eight season run.

It was Holly's turn next, and she confessed to Andrew that she wants to have a baby as soon as possible. She's 36, her fertility isn't great, and she's worried that she's missed her chance to start a family.

It was a massive gear change.

But at first I wasn't concerned for Holly because 'experts' had matched her with Andrew. And Andrew is a 39-year-old man, who already has a child, and signed up to a reality TV show in order to find a wife.

I thought surely Holly's and Andrew's goals would align? Surely, during the prescreening process, they asked Andrew how he felt about having more children and what his timeline in regards to that would look like?

I thought, surely, they wouldn't match a 36-year-old woman who has told them she's running out of time to have a baby with a man who would be shocked to hear this news?

Surely, they wouldn't waste this woman's time when she's told them she's actively running out of time?

But that's exactly what happened.

While Andrew was at first supportive of Holly's admission, he later told her he felt it put too much pressure on him and he wasn't ready for that kind of conversation. And unlike Holly, Andrew has the gift of time.

By the end of the episode, Andrew had walked out of the experiment.

We don't know whether Andrew will return to the show but we do know one thing for sure - Holly was forced to admit her biggest fear on national TV and then have it come true.

Listen: The science behind why you're obsessed with MAFS. Post continues below.

Her fertility fears were used for ratings and to create buzz around a TV show. And while all this was happening, Holly had lost even more precious time.

Months of prescreening to get on the show. Weeks of filming. And god knows how much time to recover from the experience.

Claiming to match people who are compatible with each other, and then actually doing the complete opposite, is the oldest trick in the MAFS' book. And most of the time it makes for great TV.

For example, matching a man who has a foot phobia with a woman who will tell him about her missing toe nail.

But matching a woman who desperately wants to have a baby and is - in her own words - running out of time, with a man who is not even open to that conversation is particularly cruel.

And it's a storyline I hope we never see play out on reality TV again.

Reply
Upvote
I don't usually sign up for sites like this, but YES, this behaviour on MAFS is beyond disgusting.  Even worse the next week when Andrew blatantly starts gasslighting Holly calling her a "narrcistic".  Not hard to pick from his gloating about having 350 partners to a sincere Lady that this might actually be his clinical diagnosis?  Utter manipulation?
I note, as a surfer I am just as repelled by Cody using Northern Beaches culture to justify why he has previously never been attracted to anyone "Asian".
D
deb18 5 months ago

Reply
Upvote
I do not watch MAFS, just read the recaps here but the show this year has made me rethink this.  MAFS seems to be about matching vulnerable women with abusers and no-hopers who could never find a partner in the real world.  That's not entertainment and  it should not be marketed as such.  I won't be giving MAFS any more clicks by reading any more stories about it, even if they are pointing out the   issues with the show
News
General
Opinion
True Crime
Politics
Sport
Explainer
Entertainment
Celebrity
Reality TV
Movies
TV
Books
Rogue
Royal
Lifestyle
Beauty
Fashion
Weddings
Home
Wellness
Health
Fitness
Travel
Food
Family
Before The Bump
Pregnancy
Baby
Kids
Teens
School
Parent Opinion
Work & Money
Money
Finance
Career
Lady Startup
Relationships
Sex
Dating
Separation
Friendship
Family
Real Life
Couples