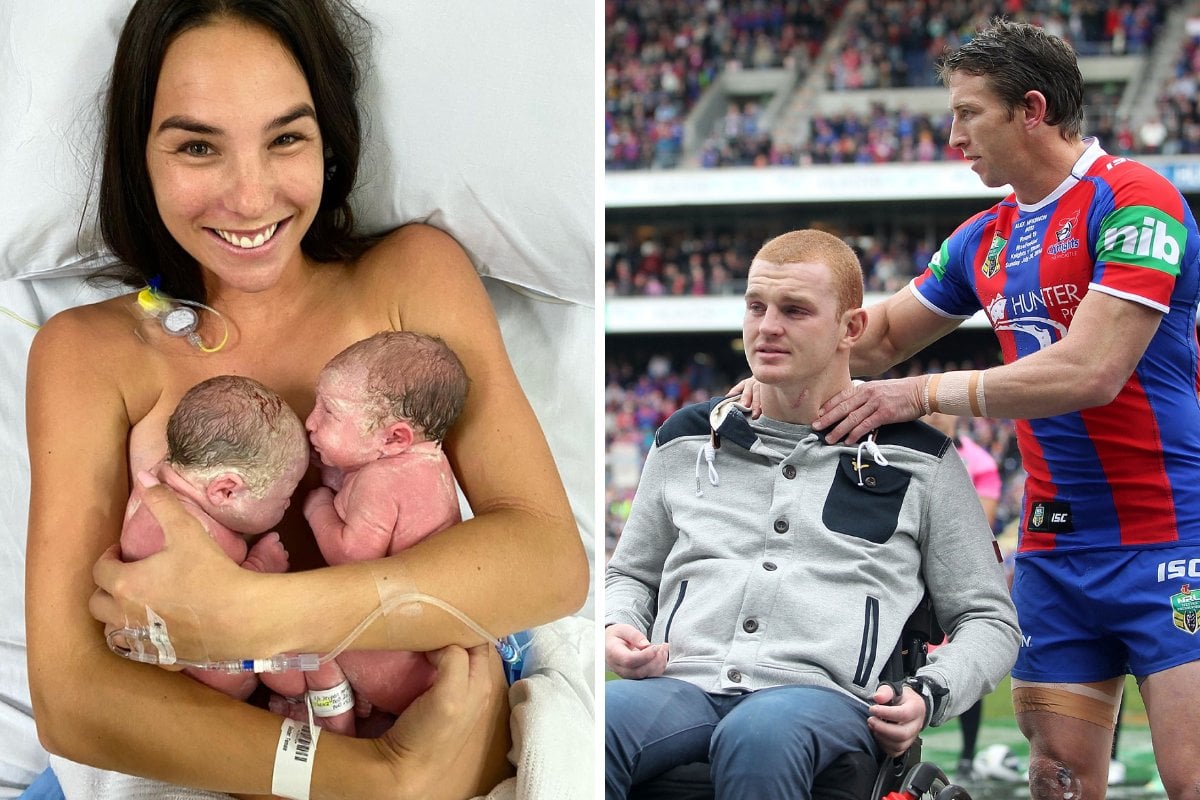 In front of a crowded stadium, alongside his Newcastle Knights teammates, Alex McKinnon was caught in a tackle that would change his life forever.

The angle and impact of the lifting tackle hit him with a spinal cord injury that would see him live out his days in a wheelchair as a quadriplegic.

Alex knew the second it happened that serious damage was done, but he was "too embarrassed" to tell his partner and his mother.

"I suppose it takes you back to being a man, you’re your identity is there: Strong, unfathomable, unwavering. I just felt that it was embarrassing that I was laying there unable to move. I just felt like a real failure," Alex shared on ABC's One Plus One in December last year.

Watch Alex McKinnon's interview on One Plus One, where he discusses the tackle that changed his life. Post continues after video.

Following days of unconsciousness and an impending diagnosis, Alex lost himself.

"I felt at that point when I was laying there that I wasn’t a human, I was more of an object. It’s something which I’d really struggled with post being injured," Alex told interviewer Stan Grant.

"It sounds really weird, but when people start to treat your injury and the effect that an injury like that can have on your life and how it consumes you, you start to identify yourself with that injury and not myself, Alex McKinnon," he said.

"So on that night, that was a really clear reflection, an image that I can still see to this day, of a female standing over me, pricking my body, trying to assess me, not talking to me. It was a really weird feeling."

Speaking to 60 Minutes in 2015, Alex said the player responsible for the tackle had reached out to him to apologise.

"He sent me a message maybe two months after the accident. I'm not angry. At the start I probably was. I know he'd be sorry," he said.

While Alex knew that he needed to "reinvent what it is to be a man" to feel like himself again, before that could happen, things got much, much darker.

Weeks into his recovery, days after his diagnosis, Alex McKinnon wanted to give up.

In his book, Unbroken, he recalls the moment he was hysterical in the hospital, screaming at his parents.

"'I’m f**king over this! I don’t want to be here,' I screamed. 'This is making me sick to my stomach. Why can’t I just die? Why can’t you just kill me? Why are you going to put me through this? How can you let me live like this? Is it just for yourself? I’m happy to die. I want this over. Why, why, why?'"

"I felt that my parents were being really selfish that my injury was really serious and I didn’t want to live a life in a wheelchair. That’s what my mind was fixated on. I couldn’t see what my life would be like."

He also had blurry vision when it came to his future with his girlfriend, Teigan. But it wasn't to do with what she thought of him, but what he thought of himself as a partner, lover and life-companion.

"I knew it wouldn’t break her. I thought it would break me," he told Stan Grant on the ABC.

In 2015, Alex wrote for the Gold Coast Bulletin:

"You think rugby league players are tough? Well, come and spend a day with my fiancee.

"A lot has changed in both our lives but that one thing remains: I don’t want to be with anybody else and neither does Teigan.

"Becoming engaged to Teigan is the greatest achievement of my life."

Teigan and Alex tied the knot in October 2017, with Alex's one wish for the big day that he would be standing at the altar, waiting for his bride.

With a nifty stand and support from his groomsmen, Alex's wish came true. He stood up, and said 'I do' to the love of his life.

Months after their nuptials, the couple announced they were expecting "Baby McKinnon". Alex and Teigan welcomed their baby girl, named Harriet, on their first wedding anniversary.

Since focussing on family life, and feeling more at peace with his disability, Alex says he's never cried more.

Comparing now to his rugby days, Alex admits that he felt emotionally "trapped and anxious" and that he was constantly "scared to make mistakes". But now, he focusses on the good and leans into every lesson life throws at him.

And the next challenge might be his biggest yet, as Alex and Teigan announced this week that they have just welcomed twin girls.

Named Audrey Jill and Violet John, these two "little precious girls" bring the McKinnon clan to a family of five and mark a whole new chapter in their lives.

And you can bet that Alex is only looking forward, and not bothering with questioning the past.

"It sounds crazy, but if you could say to me ‘would you take things back and go back to where you were’, I really wouldn’t. I’m really lucky with the position that I am in and how I feel about myself and my life."