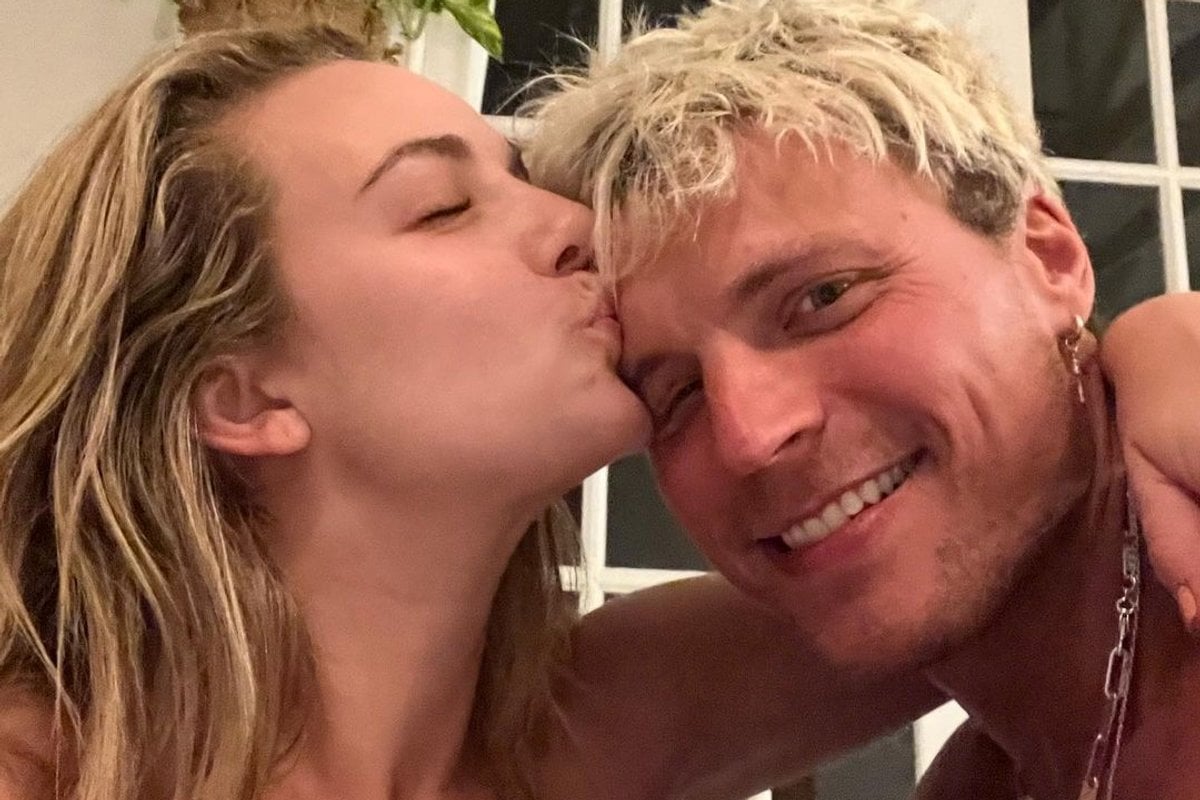 After a sneaky TikTok soft-launch earlier this week, Abbie Chatfield has made her relationship with The Bachelorette contestant Konrad Biel-Stephens Instagram official.

But after his departure from the house last week, the pair have been able to share their relationship publicly.

Watch a clip from Konrad and Brooke's single date... before things went downhill. Post continues below.

Abbie first debuted (aka soft-launched) her relationship with Konrad via TikTok a few days ago where she spoke to him off camera.

"There goes all my hope of being the victim," she said, to which he replied: "You wanted to be a victim?"

"I didn’t want to be the toxic one," she replied.

"Why does anyone have to be toxic?" he responded

Abbie then paused, laughing to the camera: "Oh, sweet boy."

She captioned the video: "The tragedy of dating a securely attached man," and the comments were filled with people speculating on her on Konrad's relationship.

On Wednesday afternoon, Abbie confirmed everyone's suspicions, writing: "Me: I’ll never talk about who I’m dating publicly. This mf: 🧍", alongside a number of pictures of Konrad.

Speaking to Mamamia after his exit, Konrad said he and Abbie met through a mutual friend and hit it off.

"It wasn't something that was planned. It was a totally, totally random occurrence where I was out to lunch with a friend who's a mutual friend of Abbie's and Abbie just happened to message my friend while we were having a few cocktails and said, 'Hey, come see me. I've just got a place in Byron, come down and have a drink'. So they were like, 'Can we go meet my friend?' Yeah, and so it went from there. It wasn't something that was planned. It was totally random, but she's an awesome chick hey, I was just so stoked I got to meet her."

He said that even though they could bond over their reality TV experiences; he reckons he and Abbie would have hit it off, regardless.

"She was so rad, I feel like if I hadn't been on the show, but I was still with my friend and we went to go have a drink, I feel like it probably would have eventuated in the same way just because I get along with her so well," he said.

"Yeah, I mean, it's funny to sort of share experiences with each other even though she had a totally different experience to me obviously, with all the bullying and stuff."

As for the leaked photos? He said headlines of production being "livid" with him over the photos were false, but "I'm going to deal with the consequences when they do arise" (which probably just means missing out on a $5k payment for breaching his contract).

"I'm in a really good headspace," he said at the time.

"I've processed it all. It's been a few months since it wrapped, and I'm super happy at the moment."