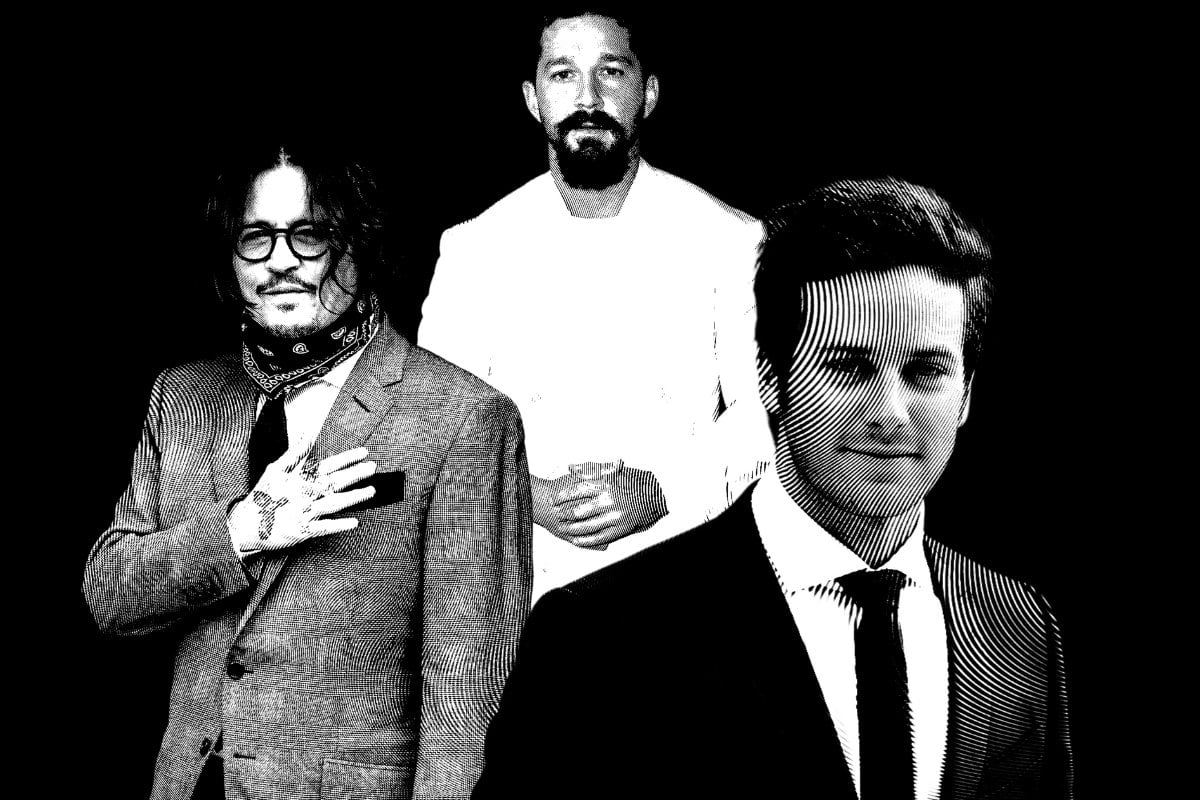 This post deals with sexual assault, rape and domestic violence and might be triggering for some readers.

Playing the bongos, nude, while smoking an enormous reefer.

Cheating on your wife with the most beautiful woman in the world.

Selecting your girlfriends from the pages of modelling agencies' "look books".

You can't read the names Matthew McConaughey, Brad Pitt and Leonardo DiCaprio without the above gossipy tidbits (in order) being mentioned right alongside their bold-faced names.

They used to be called "bad boys", the Hollywood stars whose refusal to 'settle down and play nice' was part of their allure.

They got up to the kind of thing celebrity publicists fretted on getting calls about, the kind of thing that made the covers of the supermarket magazines and cemented an actor's status as manly, desirable and just a little dangerous - the perfect mix for a pin-up.

Being pulled over for drag-racing your yellow Lamborghini while high on marijuana and Xanax.

Being pulled over in a no-stopping zone only to be found in the middle of a "lewd act" with a sex worker - an incident that will globally humiliate your famous girlfriend.

Being pulled over for erratic driving only to find that your glove box is stuffed with heroin, cocaine and a handgun.

Thank you Justin Bieber, Hugh Grant and Robert Downey Junior for going that little bit further (ahem) and setting up these perfect scenes for a redemption plot-line. A celebrity mugshot. Rehab, repentance and the "love of a good woman" has seen these men keep rising to mega-star status, and way above the arrests that once defined them.

Well, what's a Hollywood career without a little brush with the law? We all make mistakes, they're only human. Etcetera.

But then there are those, you know, passionate "ladies' men", who have a problem... drawing the line.

"I used to like to be a dominant lover," said Call Me By Your Name actor Armie Hammer, in an interview in 2017. "I liked the grabbing of the neck and the hair and all that..."

"I don’t want to touch a woman, I don’t want to hit a woman, but I’m getting pushed,” Shia LaBeouf rants in a 2015 video, minutes after the Transformers star leapt out of a car driven by his wife, Mia Goth, on a German highway. "If I’d have stayed there, I would have killed her.”

“Let’s burn Amber," mega-star Johnny Depp cheerfully texted his friend, movie star Paul Bettany in 2013, referring to his then-fiancée, Amber Heard. “Let’s drown her before we burn her!!! I will f**k her burnt corpse afterwards to make sure she is dead.”

Yep, right up against that line.

Listen to Mamamia Out Loud, where Mia, Holly and Jessie discuss the men who don't know how to have sex. Post continues after podcast.

Fast forward to 2021, and Armie Hammer is being accused by several women of abusive and controlling sexual behaviour. Of allegedly threatening his lover with death if she were to tell his wife about their affair. Of allegedly telling women that he 'owns them', and he gets to decide where they go, who they see, what they do. Of allegedly carving his initial - a tiny, bloody A - into his girlfriend's thigh. With a knife.

Shia LaBeouf has been charged with assault by his ex-girlfriend, FKA Twiggs, who alleges in her court documents that he tried to strangle her, slammed her into a car door, regularly left her bruised and dictated how often and how much she could touch him. Twiggs' case includes allegations from another of LaBeouf's exes, Karolyn Pho, who said that the actor also abused her, including, in one instance, head-butting her until she bled.

And Johnny Depp was unsuccessful in convincing London's High Court that he did not deserve the label "wife-beater" after a case that exposed a devastatingly long litany of drug and alcohol-fuelled crises, high-octane arguments and self harm, spanning a number of years and 14 alleged incidents of domestic abuse. Depp is appealing. Heard, the subject of the texts between Depp and his famous friend, says she intends to donate her $7 million divorce settlement to charity.

Yes, we used to call this breed of of celebrities 'bad boys'. Now we call them dangerous. And in the light of a post-#metoo Hollywood their shiny allure has worn through to transparent.

Picking through the mess of scandal around Armie Hammer, you'll find his Finsta - a fake Instagram account. Here you'll see a movie star (estimated to be worth about $16 million if you do not consider the dynastic inheritance from his fabulously-wealthy family) wild-eyed, whining about his divorce. Poor Armie, his ex-wife is making him take drug tests before she'll let him see his kids. Luckily, he knows how to get around them, because there's nothing better than drugs. Poor Armie, his ex-wife refuses to bring the kids to America, so he has to travel to the Caribbean islands where she lives. Luckily, he gets to have sex with his favourite local girlfriend while he's there. Look, here's a shot of her on her hands and knees. In lingerie.

Hammer's Finsta paints an unfiltered picture of a kind of warped middle-aged male fantasy-world, one where women are either adoring sex objects or whiney wives. The bros getting a kick out of Armie's "wild man" secret life must be enraged and perplexed that suddenly the women they've dated and discarded have their own voices, their own channels to express how they felt about being told - as Hammer's girlfriend allegedly was -  "I want to bite a piece of your skin off and eat it".

Hollywood's leading men were openly supportive of the #metoo revolution when it was exposing men they considered bona-fide crooks and rapists. But now, well, there's a whole new rulebook, and for some of the old-school 'bad boys', it's not looking good.

How infuriating for Armie that he's been removed from his new movie project. How terrible for Johnny that he's been booted off his latest family film. How upsetting for Shia that as soon as FKA Twiggs filed her allegations, other women immediately jumped to corroborate.

How irritating to all of them that in 2021, being a man who openly treats women as objects to collect and disrespect isn't that attractive any more.

Is it a hopeful sign for masculinity that the new-era heart-throbs aren't those bro guys, oozing machismo? Timothee Chalamet, with his slight androgeny, is the Internet's never-ending obsession. Harry Styles, who turned away from boy-band adulation to play with gender roles and make beautiful pop is moving into film. There's Tom Holland, a super hero Spiderman with humour and heart. John Boyega, the British Star Wars actor who was unafraid to call out racism, even if it came from Disney. Even the Hemsworth muscles come with a persona of doofus family man.

Perhaps it is hopeful. Perhaps we're entering a post-comeback era, where women don't want to watch men who remind them of their very worst experiences idolised on screen. Perhaps there are more diverse models of manhood being held up to the light.

Perhaps Armie, Shia and Johnny are among the last of the Hollywood 'wild men'.