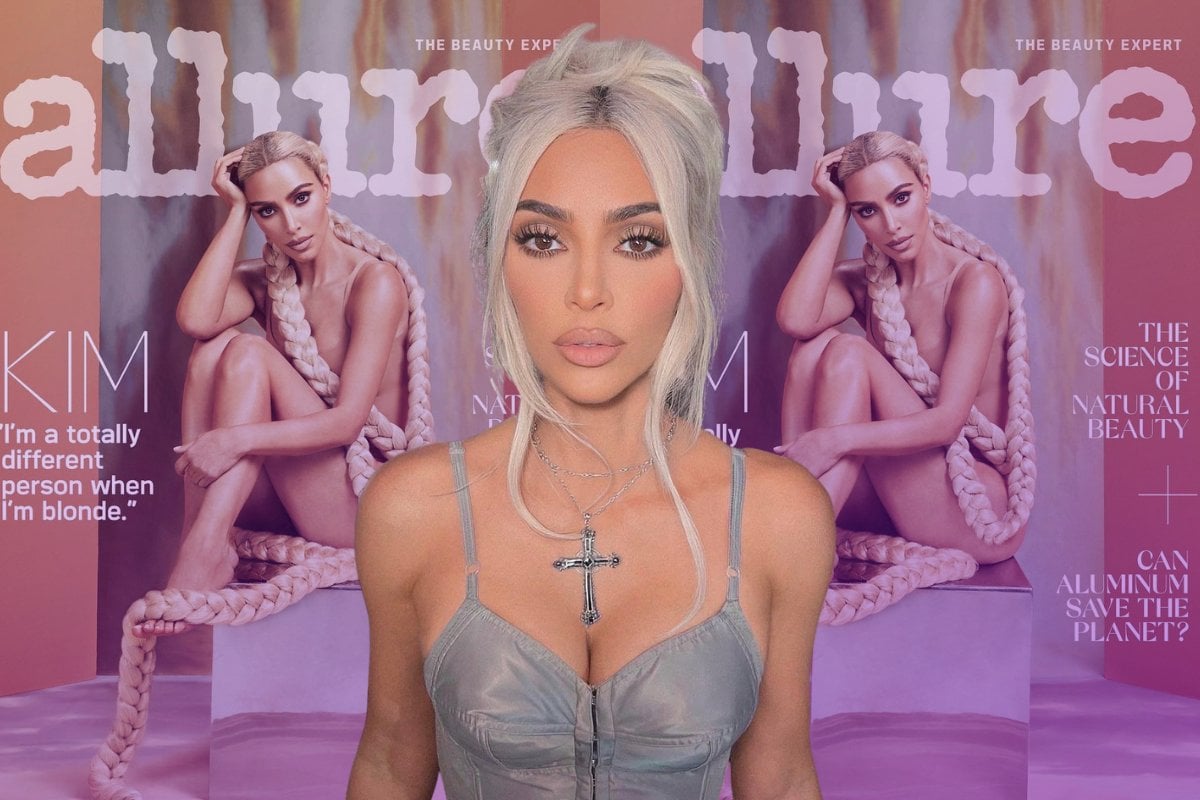 Listen to this story being read by Erin Docherty, here.

We may only be in July, but 2022 has already been a YEAR for our friend, Kim Kardashian.

Ugh! What a whirlwind! One very, very rich and famous whirlwind.

And to add to the ever-growing list of ✨ things✨, Kim is now the cover star of beauty magazine Allure's August 2022 issue.

In an accompanying interview, she discusses everything from her constant hair changes to her approach to ageing and never getting fillers.

And there's a lot to unpack. Like, so, so much.

Here are 12 things we learnt about Kim Kardashian.

She cares about her looks. A lot. Probably more than you.

In news that surprises absolutely no one, Kim told Allure that her appearance is something that is incredibly important to her. Which is incredibly on brand, really.

“I probably care more than 90 per cent of the people on this planet," she said.

"It’s not easy when you’re a mum and you’re exhausted at the end of the day or you’re in school," she shares. 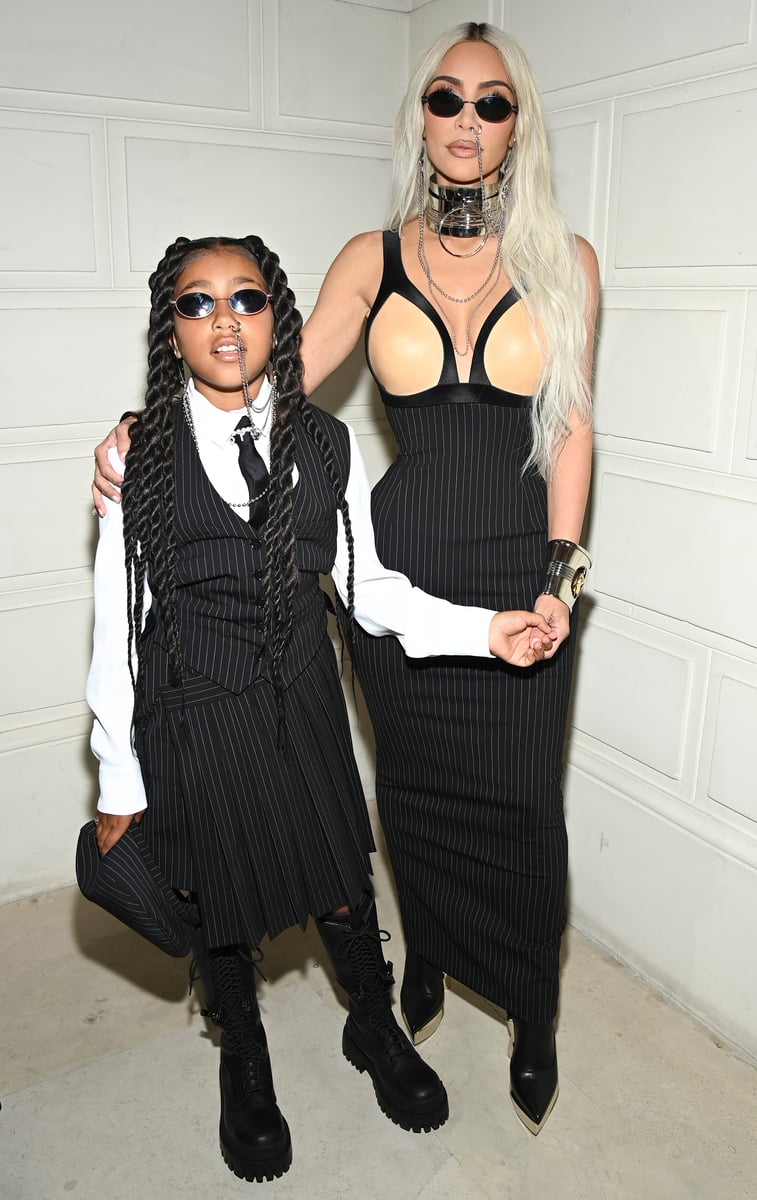 She's "at peace" with not being perfect.

When it comes to her appearance and ageing Kim, who is now 41, said she's finally come to terms with the fact that she doesn't have to be perfect. Kinda. Not really.

“I’m at peace with not being perfect and I wasn’t like that before,” said Kardashian.

"[Getting older] doesn’t mean that I won’t strive for perfection, but you get to a point where you’re like, ‘Okay, my health is more important than anything else.”

While she knows the ageing process is a natural part of life, she said this doesn't mean she's not going to try to do everything she can to look and feel as young as she can, for as long as she can.

“It’s hard to explain because I am at peace, but I would still do anything to look and feel youthful.”

It sounds confusing. Because it is.

Especially when you think about this quote from that recent interview The New York Times: “If you told me that I literally had to eat poop every single day and I would look younger, I might. I just might.”

But just in case you thought she was referring to a WHOLE bowl of poop in that NYT interview, she confirmed with Allure: “Maybe just a bite. I don’t think I can do a whole bowl.”

“That doesn’t mean that I don’t know the difference from that to an unhealthy level of feeling like I can’t age,” she told Allure.

“I’m 41. I always want to look appropriate. There does come a point when you’ve taken it too far — overfilled, too tight, too much cosmetic work. There’s nothing worse.”

She hates her hands.

Okay, weird flex - but if there's one thing Kim doesn't love about Kim, it's her hands.

“I hate my hands — they’re wrinkly and gross," she said.

She thinks her beauty standard is actually attainable.

Growing up in the 90s, Kim recalled the 'blonde', 'waif' look as the dominant beauty standard, and said she found herself looking up to celebrities such as Salma Hayek who "had darker hair and darker skin and more curves."

“If I’m doing it, it’s attainable. There are so many different beauty standards — whether it’s Gwen Stefani, Jennifer Lopez, Marilyn Monroe. When I was a teenager, [the look] was just blonde waifs," Kim explained.

“My mentality was never like, you see them on TV or in magazines and pick who you want to be,” she says. “It was always: Be yourself, find beauty in everything.”

It's a tough call from Kim - especially considering the backlash she received over touting her dramatic weight loss to fit into that dress...

She defends her controversial weight loss for the Marilyn Monroe dress.

In the interview, Kardashian spoke about the process of fitting into the famous dress that Marilyn Monroe wore to serenade President John F. Kennedy on his 45th birthday in 1962.

"It was a roller coaster of emotions," she told Allure.

"To even find the dress was a feat, and then to get them to allow me to wear the dress was another feat. You have [to wear] gloves and there are guards and you had to put down special paper. I think [the dresser] was shaking because if anything rips, if anything goes wrong, you know? This is Marilyn’s dress. And it absolutely did not fit."

With only a few months to go before the gala, Kim said she had a choice to lose weight, or find something else to wear.

Kim, who eats a plant-based diet, goes on to reveal that eating real meat caused her psoriasis to flare up.

"Psoriasis broke out over my body and I got psoriatic arthritis so I couldn’t really move my hands," she said.

"It was really painful, and I had to go to a rheumatologist who put me on a steroid. I was freaking out. I cut out the meat again, and it’s calmed down."

In response to the controversy surrounding her extreme weight loss, Kim compares it to an actor losing weight for a movie role.

“If I was starving and doing it really unhealthy, I would say that, of course, that’s not a good message. But I had a nutritionist, I had a trainer. I have never drunk more water in my life."

"I don’t see the criticism for other people when they lost weight for roles — they are [considered] geniuses for their craft."

"There are so many things out there that are so not accurate and not true."

She gets laser treatments after her kids go to bed.

Because, of course she does.

The mother-of-four, whom she shares with Kanye West (North, nine, Saint, six, Chicago, four, and Psalm, three), said she treats her skin to late night laser treatments once her kids are in bed.

"I do my beauty treatments usually late at night. After everyone’s in bed, I’m doing laser treatments."

Which is ultimately the perfect reminder that, no - you're not going to get skin like Kim just by using SKKN By Kim.

She has doctors. Dermatologists. Aestheticians. Access to fancy laser machines. All at her fingertips. Literally ANY time she wants.

Kim loves a hair change. From peroxide blonde to brunette and back again - she's a true chameleon. Like, how her hair is still growing on her head and not completely snapped off, we're not too sure.

But contrary to what we might think, according to Kim, her hair is as strong and healthy as ever.

For Kim, her endless switch-up between blonde and brunette hues is more than just a look. Changing the colour of her hair, she said, is all about a vibe shift. An alter ego.

"I have different energy when I’m blonde," she said. "I’m a totally different person."

"I’m sassier. I’m more confident as a blonde. As soon as I go back to brunette, I’m a boss."

The long, dagger-like nails popularised by the Kardashians have become iconic. But apparently Kim isn't really a fan of them - saying she just can't deal them anymore.

She said, "I’m also a totally different person when I have long, fake nails on. I have so much confidence — and I hate long nails!"

Not surprisingly, it makes it difficult to get... anything done. Especially a law degree.

"Every once in a while, I need that bitchy-boss energy. But when I have to write an essay, I’m like, ‘Get these nails off me!’ I can’t type.”

She has anti-wrinkle injections, but doesn't have filler.

When asked what kind of cosmetic treatments she's had done, Kim shares that she gets "a little bit" of anti-wrinkle injections in the space between her brows. “But I’ve chilled, actually," she said.

Apart from anti-wrinkle injections and laser treatments - that's it.

Nope, apparently not even eyelash extensions!

Anyone else shocked at that? No? Just us?

“No. I’ve never had eyelash extensions. I’ve never done anything. I have a drop of mascara on today."

She told the interviewer she needed anti-wrinkle injections.

Before we pile on Kim, we need to preface this by letting you know that interviewer, Danielle Pergament, did ask Kim what cosmetic changes she would make to her face.

Her response? Anti-wrinkle injections. And maybe some under-eye filler.

And apparently, it's not the first time Kim's been asked to assess someone's face. She told Allure it happens all the time.

“People write all the time to say, ‘I heard you’re a really good facial consultant. Can I send a photo? What should I do?’ I am super honest: ‘Okay, you should try this facial or this laser.’ So you can understand how I’d want to get in on that."

"I have notes of the best doctors, the best everything,” she said. "When this all goes to s**t, I’m going to start a consultancy firm."

She thinks of herself as an underdog.

But how? We hear you ask.

"Being on a reality show and that’s not respected," explained Kim. "Feeling like I need to work harder to show you guys that I’m not the person you think."

"I saw some stupid report today where it was like, 'Kim’s rejected to come to the Jubilee by the Queen.' I was in London with my boyfriend who’s filming a movie and we’re only here two days. But [the headline] is, 'Kim: Rejected!’ I think that’s also why I love doing the reality show — the chance to show people who I really am."

What did you think of the Kim Kardashian x Allure interview? Share your thoughts with us in the comment section below.

S
sistap74 a month ago

Reply
Upvote
4 upvotes
I call utter BS on everything she stated during this interview. She is a dangerous role model for women and the world. Her brand is all lies and gaslighting.
S
simple simon a month ago