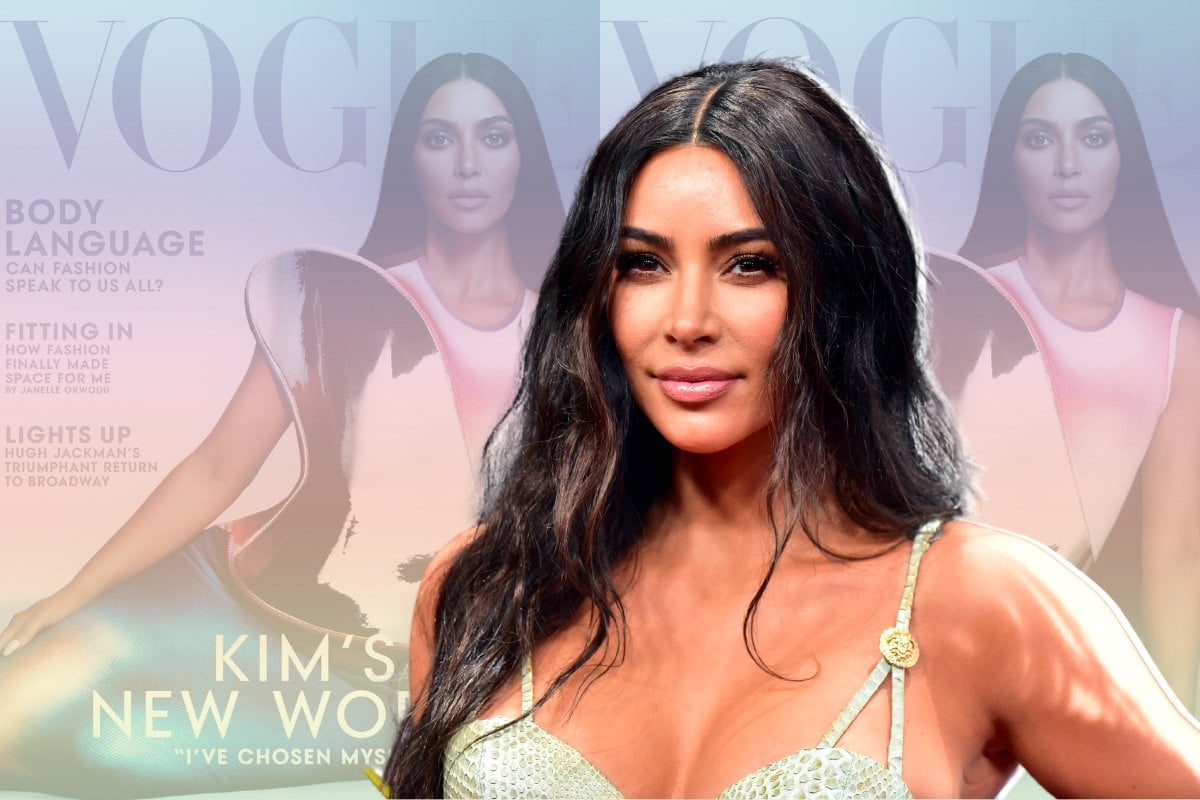 It's been a year of flux for Kim Kardashian.

In the past 12 months, she has filed for divorce from Kanye West, her partner since 2011. She's learned how to co-parent with him. She became a billionaire thanks to her shapewear company, Skims. She broke the internet (again) with that Met Gala outfit. She hosted SNL for the first time, where she met her (technically still unconfirmed) boyfriend Pete Davidson.

I don't imagine being one of the most famous people in the world affords you much quiet time, but it feels like the past year has been especially busy in the Kardashian orbit.

Kim is the cover star of American Vogue's March 2022 issue, and in an accompanying interview, she talks through the many changes in her life.

Here are the 9 biggest takeaways.

Why Kim filed for divorce from Kanye.

Kim said the reason for her divorce was that she learned to put herself first.

"For so long, I did what made other people happy," Kim explained.

"And I think in the last two years I decided, I'm going to make myself happy. And that feels really good. And even if that created changes and caused my divorce, I think it's important to be honest with yourself about what really makes you happy. I've chosen myself. I think it's okay to choose you." 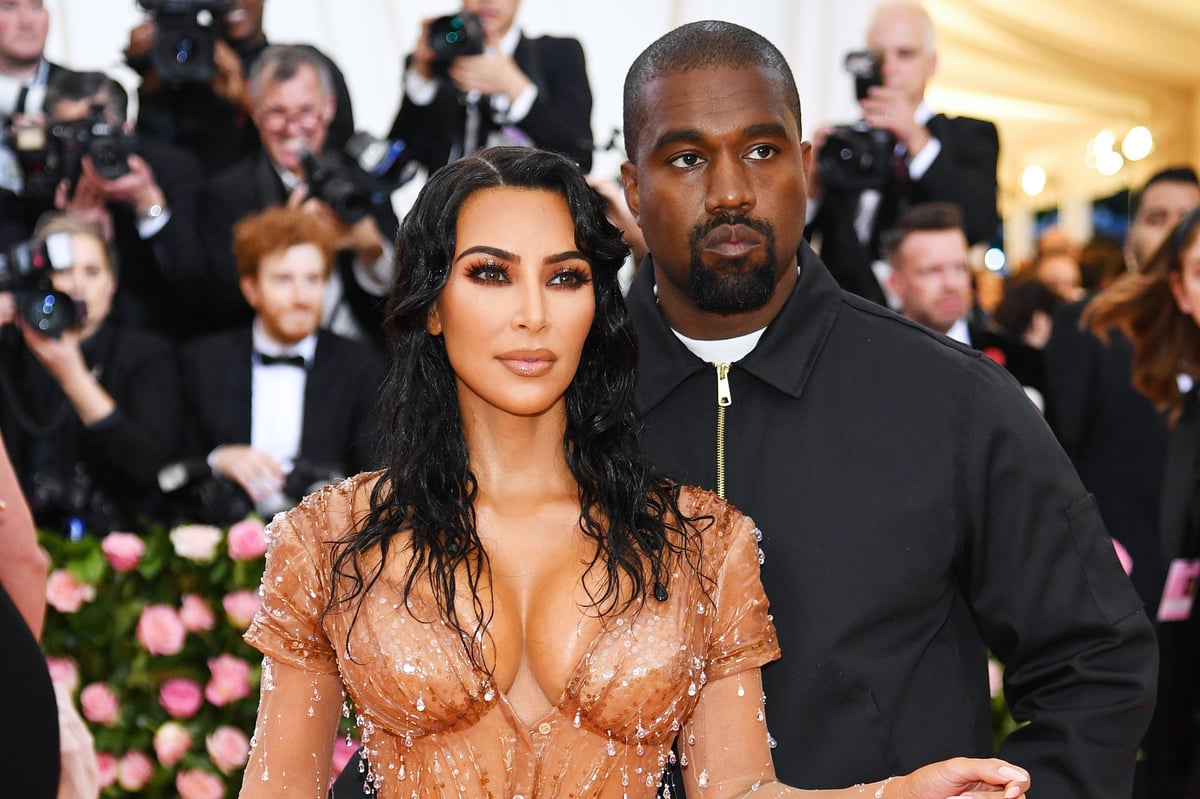 She told Vogue that no matter what; she thought it was important to champion the other parent around their children.

"You could be so hurt or angry at your ex, but I think in front of the kids, it always has to be 'Your dad's the best'. Make sure you are your co-parent's biggest cheerleader, no matter what you're personally going through."

Kim has mostly kept her public comments about Kanye to a minimum since filing for divorce a year ago, even when he hasn't. But when he asked his Instagram followers what to do about their eldest daughter, eight-year-old North being on TikTok against his will, Kim shared a public statement.

"Divorce is difficult enough on our children and Kanye's obsession with trying to control and manipulate our situation so negatively and publicly is only causing further pain for all," she wrote, reiterating her wish that "all matters regarding our children" remain private.

What Kim has planned for her 40s.

Kim, now 41, said she was putting her people pleasing ways behind her this decade.

"My 40s are about being Team Me. I'm going to eat well. I'm going to work out. I'm going to have more fun, spend more time with my kids and the people who make me happy. I'm going to put my phone down. Unfollow if I don't want to see something on Instagram. Khloé came up with the best phrase for that yesterday. She said, 'Post and ghost.'"

"When Kim and I each turned 40, we got all these text messages from our grandmother and our cousin and people over 40," Kourt explained. "They were like, You're going to have the best sex of your life. You're going to be in the best place in your life."

A subtle Pete Davidson reference, and throwing her phone into the ocean.

Kim didn't officially comment on her relationship with SNL comedian Pete Davidson, but she made an indirect reference to the tabloid-documented holiday they took to the Bahamas around the New Year.

"I was in the Bahamas, and the people I was with said, 'We're on f***ing vacation. We haven't been on vacation in a long time.' And then they threw their phones in the ocean," she said. "I was like, 'What? What? What? Am I allowed to do that?'"

Kim didn't follow suit (the turtles thank her), but she did change her phone number to alleviate the guilt she felt about not following one of her normal 'rules', about replying to messages quickly.

In 2018, Kim enrolled in a Law Office Study Program, a law school alternative which allows prospective lawyers to apprentice for four years under a seasoned attorney or judge to receive their degree.

As part of this, she must pass the First-Year Law Students’ Examination, known as the 'baby bar', before her General Bar exam, which has a very low 20.7 per cent pass rate.

"I remember Bob Shapiro [who worked with Kim's father as part of of O. J. Simpson's legal team] telling me, 'You're fucked'," she remembered.

But in December, on her fourth attempt, Kim passed.

She has a specific interest in prison reform, where issues like mandatory minimum sentences and the money-bail system disproportionately harm non-white communities.

"This work has taught me so much," she said. "Especially raising Black boys, who are going to be targeted so much more than their white friends."

Kim's relationship with her body.

Kim recalled growing up in the 90s, when the 'waif' was the dominant body type on runways and in media. Kim didn't see herself in beauty icons until the arrival of Salma Hayek and Jennifer Lopez in the mid-late 90s.

"Okay, there's other body shapes out there. There are other looks that people find beautiful," she remembered thinking. "My reference for prom was Salma Hayek. I went to the MAC counter and brought pictures of her. It was like, I finally have someone to look up to."

Decades later, Kim's body one of the most scrutinised in the world.

Her 'proudest moment' happened only recently.

"Probably my proudest moment in terms of my body recently was when I was on a billboard covering the whole side of a building with Kendall and Kylie, who are half my age, when we did a Skims underwear campaign together, and I could stand next to them and feel confident," she said.

The Kim Kardashian impact on beauty and pop culture.

In the Vogue profile, journalist Jen Wang told Kim about a figure she'd read somewhere that 30 per cent of women visiting a Beverly Hills' surgeon's office asked to look like her.

Of course, Kim and her sisters have plenty of influence on beauty and fashion trends. Your opinion on that depends on your opinion about them.

For self-preservation, Kim said she avoided thinking about that.

"I just try to live my life and be happy for people, and I think when you just live your life like that, you block it out. It's like a racehorse that puts on blinders so they can see clearly and straight. You've got to just be that racehorse, put on those blinders, and go. And if you start trying to see to the right or the left of you, you're going to trip up."

Kim's 2021 all black, silhouette Met Gala outfit is already legendary, but she said she initially had her doubts.

"I fought against it," she recalled. "I was like, I don't know how I could wear the mask. Why would I want to cover my face? But [Balenciaga creative director] Demna and the team were like, 'This is a costume gala. This is not a Vanity Fair party where everyone looks beautiful. There's a theme and you have to wear the mask. That is the look.'"

Demna told Vogue the mask was extremely important to the costume's concept.

After famously being 'made over' by Kanye at the beginning of their relationship, Kim has gone from a fashion outsider to a designer's favourite, and the creative director of her own brand, Skims.

Now without Kanye, she said she often wondered about the next step in her fashion journey.

"I always think, 'What will be next?" Because I always had Kanye, who knew exactly what the next fashion era would be for me. And there's something scary about being out there on your own, but also something so liberating.

"Who knows? I might just be in Skims and be so comfy and casual and wear no makeup, and that might be what I feel like representing to the world. Maybe it's just not that serious."

Reply
Upvote
1 upvotes
I don't understand why she isn't doing an actual law degree if this way is harder anyway?
C
cjm 3 months ago

Reply
Upvote
1 upvotes
@mamamia-user-405278599
Going to actual law school is a much larger time commitment. Doing it the way she has chosen is harder because she’s learning on the job rather than being taught all the information systematically, which makes it more difficult to pass the bar. But it also means she doesn’t have to invest the time in going to classes, doing assignments and exams that are required by the traditional pathway. She runs a million/billion dollar empire. She doesn’t have the time to spend 4 years in traditional law school.

Reply
Upvote
7 upvotes
I've never been a fan, but I think she might be growing on me. She has enormous wealth and could do whatever she wants in life, so the fact that she's doing a law degree and working on prison reform I think is pretty cool.
D
dp 3 months ago