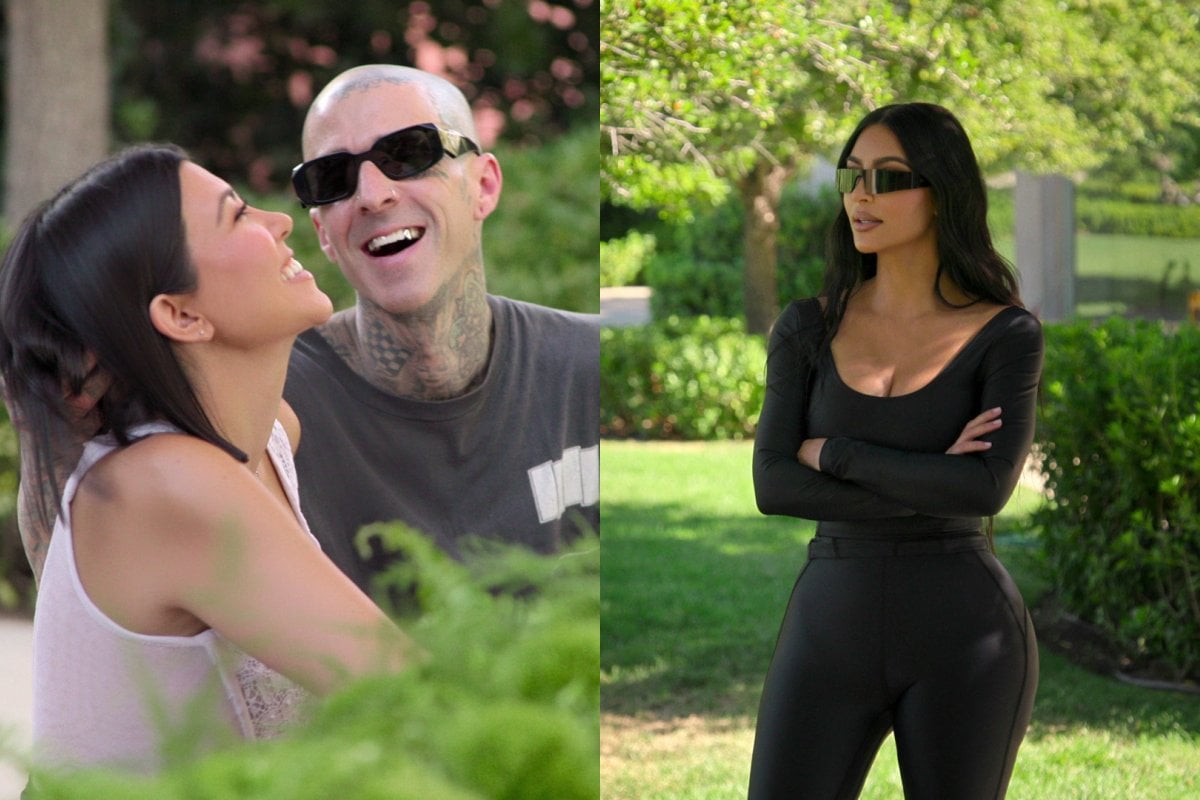 The Kardashians has just premiered on Disney+, bringing the most famous family in the world back to TV screens after a 10-month hiatus. Not that it made that much difference.

But more family drama beamed directly into our living rooms? You can always count me in.

Especially because this family is truly *ridiculous*.

Naturally, episode one of the new series raised plenty of questions. Some big, like why Tristan is still a thing, and some smaller, like... what's up with Kris' decorative choices?

Here are the questions we had throughout episode one:

Were the drone shots through their houses really necessary?

We know these people are obscenely rich, okay. We don't need to see their gigantic backyards to know it and renovations to prove it.

Does Kris really display a Teen Choice Award in her Kylie Cosmetics office? 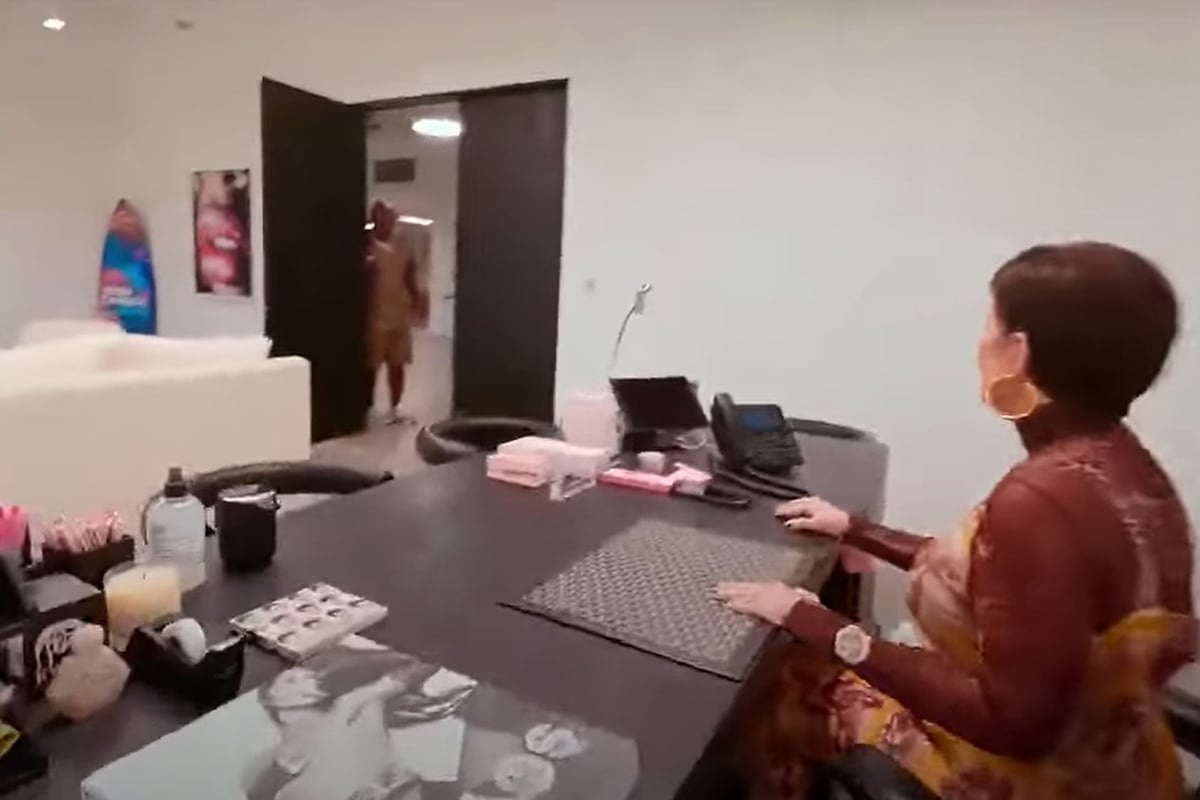 Is cleaning out a playroom really *that* good?

What colour would the slides and ball pit need to be in order for Kim to buy them?

Firstly, I adore the fact that Kim hired a pure-white slide and ball pit playground for a family barbeque. It's just so... Kardashian of her. 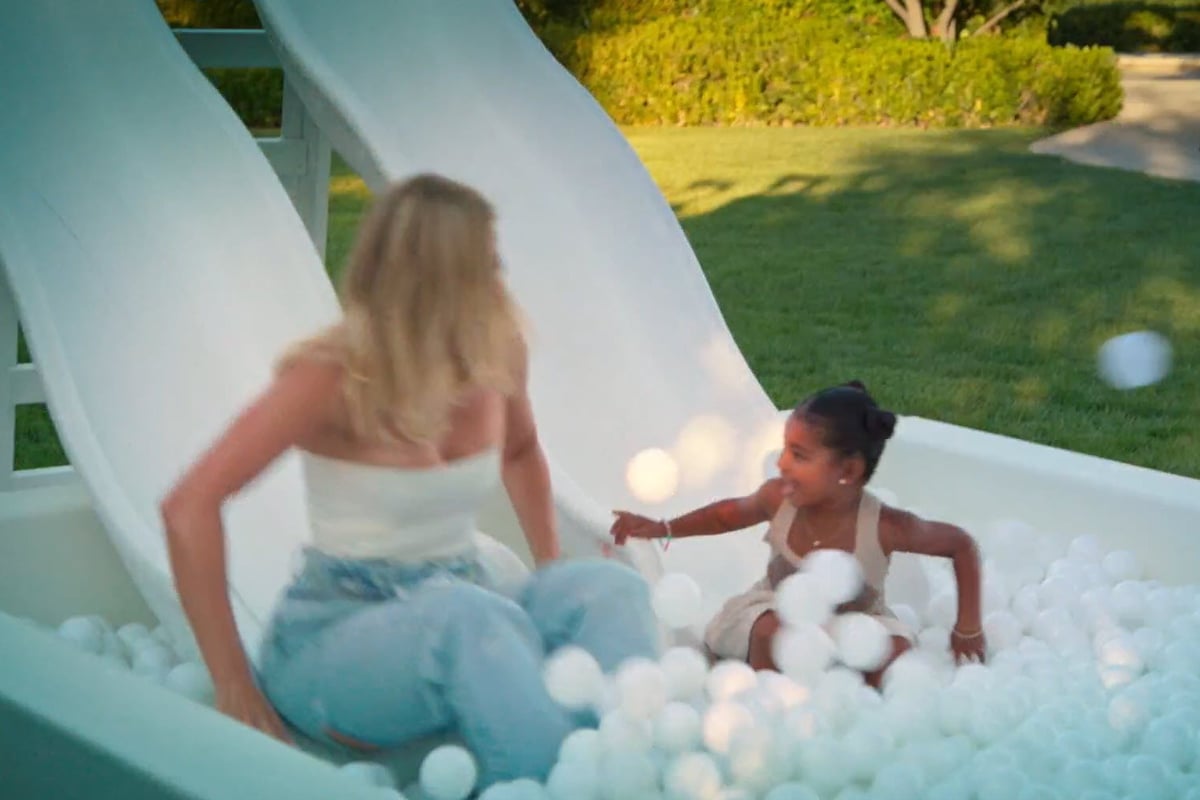 But... confusion set in when she said she'd buy it 'if it was a different colour'.

In the very same episode we are shown Kim's bedroom, which looks... bland.

Tristan appears within the first seven minutes and simply: why?

(Khloe later says she and Tristan are friendly, which is great considering they share daughter True. But that doesn't mean he needs to be at family BBQs, okay! How can they gossip about how he's trash when he's right there?! We want gossip!!!)

Also: Tristan's in therapy. A win.

Is this just the same as KUWTK?

You cannot add drone footage and transition shots and claim this is a brand new show, okay.

THIS IS THE EXACT SAME SHOW.

It is more like the earlier seasons, sure, where the focus was more on the sisters rather than their love lives. And it seems more... chill. Less feuding, more comaraderie. But those are the only differences, and they're not noticeable enough. 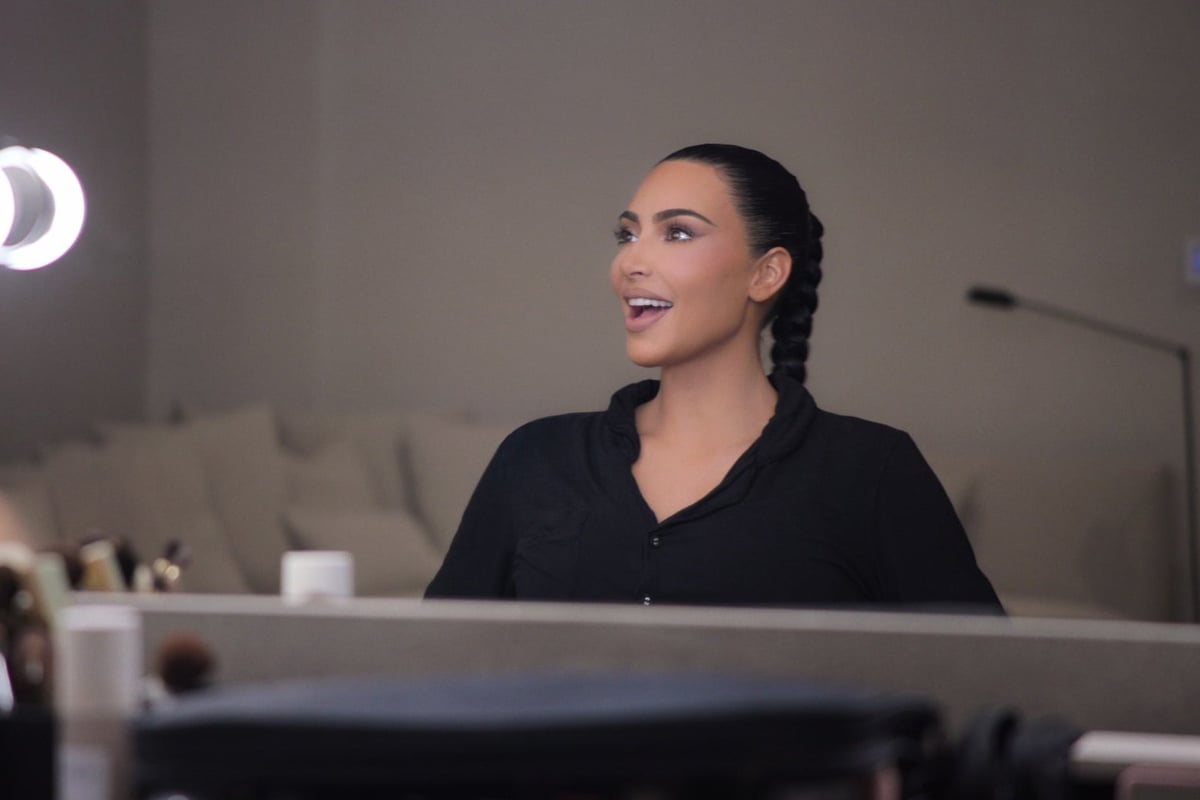 It's still a fly-on-the-wall look at the family as they go about their lives. There are still pieces to camera. Scott is still there.

One of the reasons the family gave when they announced they were changing up the series was to give us storylines closer to the time they happened IRL, but that hasn't really played out: the events of episode one took place around September 2021, so we're still watching with a seven-month lag.

I mean, they could've just told us they wanted more money. At least that sort of honesty would feel fresh!

How does Kendall get away with just... doing nothing?

We are (re)introduced to Kendall as she makes noises with a stick on some bowls in her backyard. It's called sound healing, and it's 100 per cent not real.

We have proof! Kendall bails on the family's BBQ because she was *cough cough* sick.

How is she allowed to do that? Does she have fewer contractual obligations than her sisters? Kim would have to be dying before Kris would allow her to take the day off... ON THEIR FIRST DAY BACK.

Kendall told everyone we'd see more of her in this series, and I don't want to call her a liar. But I feel like she's a liar.

Funnily enough, Kendall ALSO bailed on the series' fancy premiere red carpet event in early April too, because 'she was sick'. I told you sound healing doesn't work!

Are Khloe and Kourtney the funny ones? Is there an official ranking of Kardashians by how funny they are?

I'd personally go Khloe, Kourtney, Kim, Kylie, Kendall, but what do I know? 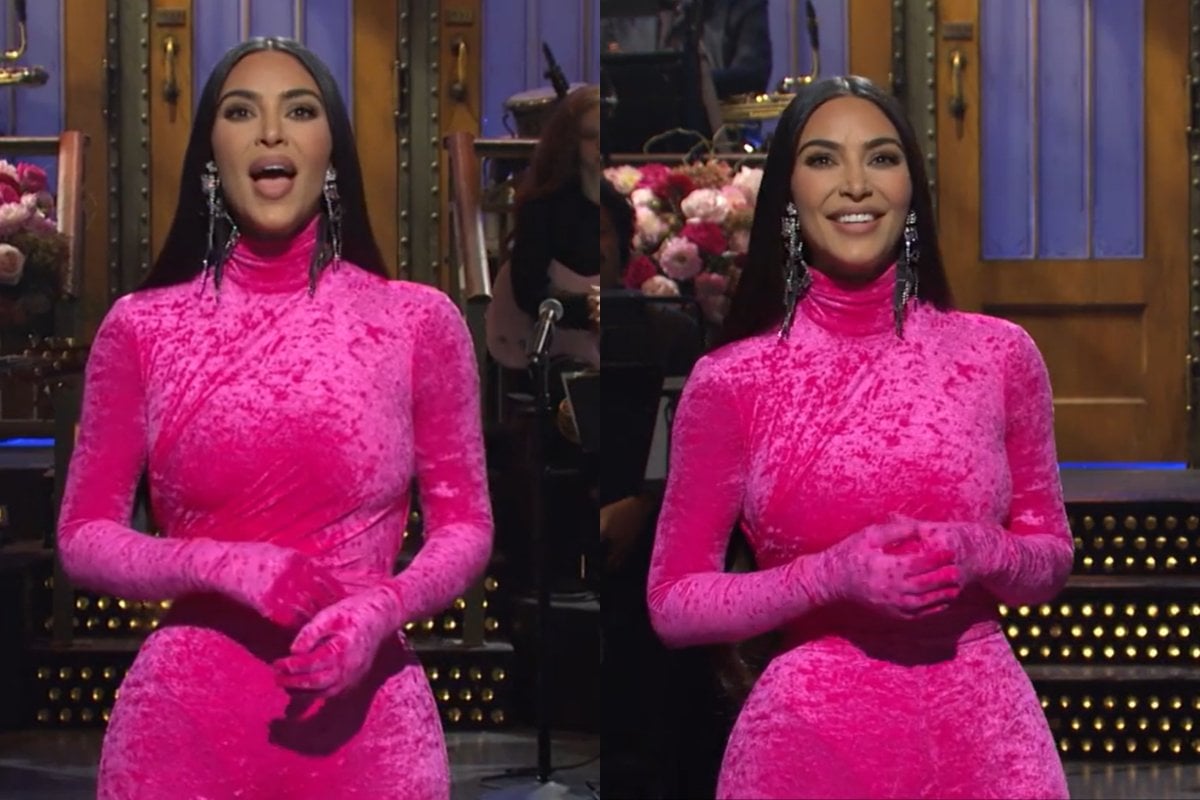 At least Kim's worrying about Saturday Night Live gifted us the greatest lines of the episode:

"I just can't embarrass us, you guys," she says.

"You've embarrassed us before, it's fine," Khloe responds, without missing a beat.

Did Scott manifest his new girlfriend?

Too much of this episode is dedicated to Scott's weird insistence on dating teenagers, but the show tries to make us think he's had a breakthrough and now wants to 'real, loving relationship' with an 'equal'. This means someone in their upper 20s, maybe, but definitely not their 30s.

But hey, he introduced a new relationship with 27-year-old Scottish model Rebecca Donaldson at The Kardashians premiere so perhaps his and Khloe's little pep talk worked.

Ugh, Kravis are so cute right? 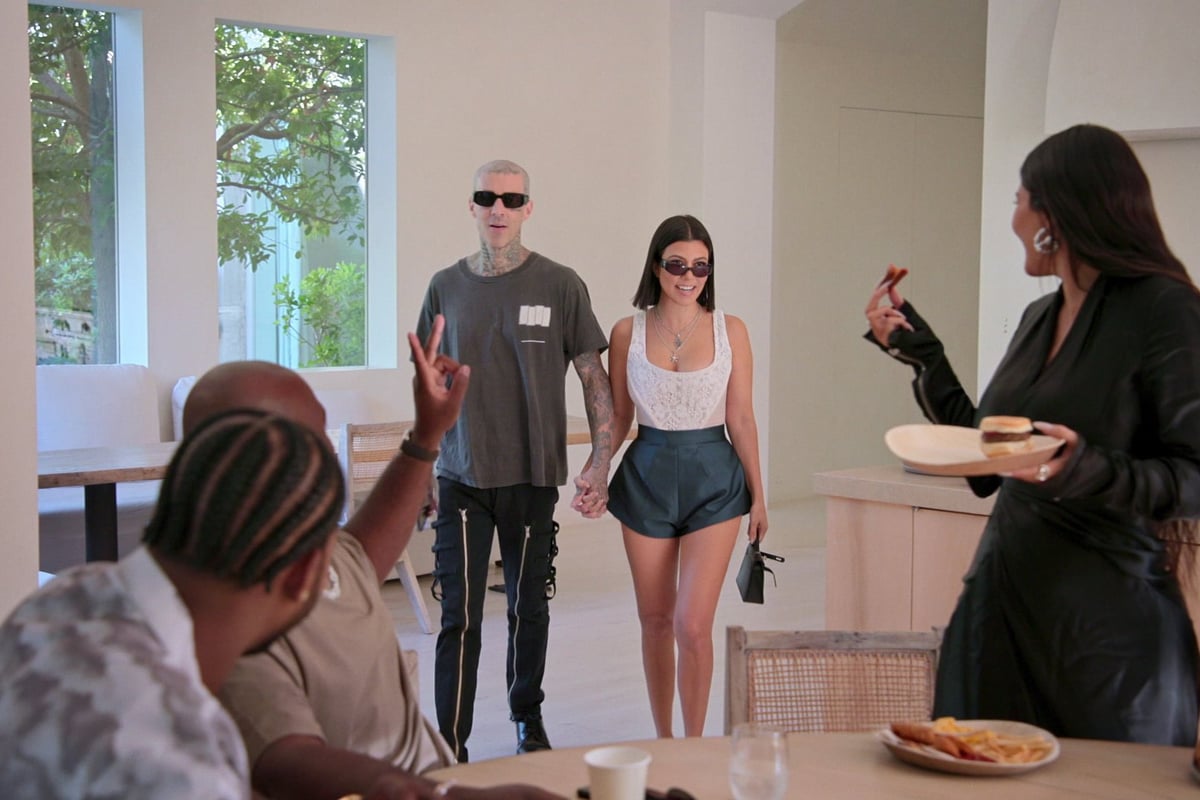 Watching Travis' 'drum battle' with Penelope was wholesome AF. Kourtney giggling while referring to Travis as the love of her life? Everyone admitting that they'd predicted their hook-up for years?

I hate how much I love it.

I'm not even that grossed out by the fact they can barely go two seconds without being attached at the face.

WHAT did that vagina conversation bring to the plate?

It is just... hysterical that they aired a conversation where Khloe talks about having a "bigger vagina than most" and requesting Kim alter a Skims product to accommodate.

I mean, we love a candid vagina discussion! But LORDY, I wasn't expecting that.

Also, the cameraperson who panned to the random men in the restaurant after hearing the word 'vagina' needs a raise.

Can you really claim you're a foodie if you order an iceberg lettuce salad?

(Also food is not 'good' or 'bad' and you shouldn't have to 'pray for forgiveness' after eating it, and HOW ARE WE STILL AIRING THIS KIND OF ATTITUDE ON TELEVISION?)

Ahhh, the Kardashians are back. Nature is healing.

Here's to a full season of this new show, which is absolutely, 100 per cent the same as their old show.

New episodes of The Kardashians drop Thursdays on Disney+.

Reply
Upvote
Kendall says later in the episode that she had covid which is why she couldn’t attend the bbq.
S
steph bh 4 months ago