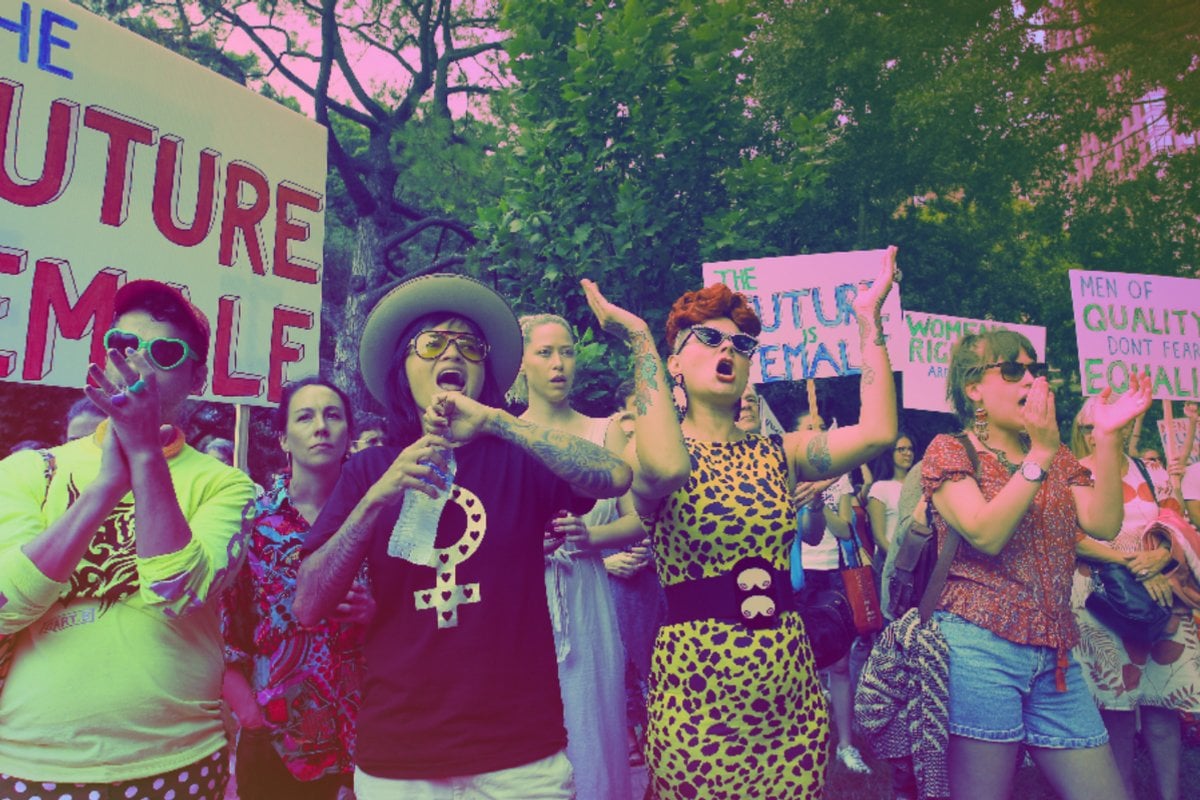 When thousands of women march on Parliament House tomorrow to demand immediate action to address sexism, misogyny, dangerous workplace cultures and lack of equality in politics, I will be with them.

One of my key motivations to enter politics was to stand up and call this behaviour out. Sadly, that has been missing in our federal Parliament for too long.

When I put my hand up to run in 2019, many in the community warned me of the misogynistic culture of politics. Having been an Olympian and a Barrister I am familiar with working in a male-dominated industry, and, having watched the sexist treatment of Julia Gillard and then Julie Bishop, I was more motivated than ever to bring change to Canberra.

I have learnt there is no satisfaction in sitting on the sidelines. If you want to change the status quo you need to act, and you need to be heard.

Watch the Mamamia team at the Women's March in Sydney. Post continues after video.

It’s now nearly two years since I was elected as the Member for Warringah. That’s enough time to learn what the culture is like in Parliament House – a workplace filled with toxic masculinity and not enough male or female leaders prepared to call out inappropriate behaviour.

If the Brittany Higgins and Attorney-General Christian Porter rape allegations are anything to go by, the Government is failing to act.

At one point during Question Time, as the allegations were compounding, Prime Minister Scott Morrison suggested the two major parties should run their own internal investigations into the treatment of staff “and then exchange notes”. Give me a break.

Under pressure from the Crossbench and the Opposition for an independent inquiry, the government agreed. There are now four ongoing separate inquiries since Brittany Higgins went public with her shocking allegations, but only one is truly independent and will make its findings public.

The allegations have also resurfaced deeply problematic exemptions in the law for Members of Parliament.

Under the Sex Discrimination Act, Members of Parliament, judges, and other statutory appointees are not clearly protected from, or liable for sexual harassment in their workplace.

This exemption was made public in the Australian Human Rights Commission’s ‘[email protected]’ report that was delivered to the Government a year ago – sitting on the Attorney-General’s desk - yet nothing was done about it.

Last week I wrote to both the Prime Minister and Attorney-General urging the Government to implement the proposed amendments. Their response? Nothing.

That is why tomorrow I am introducing a Private Member’s Bill Sex Discrimination Amendment (Prohibiting All Sexual Harassment) Bill to amend the Act and address sexual harassment in every workplace.

Let’s be real. The Australian public are sick of words. They want action.

One tangible and simple legislative action is to amend the Sex Discrimination Act.

The next step is to get more women elected into Parliament as Independents who are not content with ‘toeing the party line’; women who demand change when they witness bad behaviour.

Whether it is climate change, a National Integrity Commission or sexual harassment, Independents can openly offer solutions, critique the major parties, and change the national conversation.

In Warringah, a lot of people have been asking me whether the latest string of damning sexual allegations in federal Parliament will be a watershed moment.

My answer? It needs to be.

To the thousands of women marching tomorrow: it is time to be loud.

Zali Steggall MP will introduce Sex Discrimination Amendment (Prohibiting All Sexual Harassment) Bill to amend the Act and address sexual harassment in every workplace on Monday.

C
ceeshay a year ago

Reply
Upvote
1 upvotes
I’m am in my 70s I have experienced physical and sexual assault both in and out of the workplace. I am guilty of staying silent. I didn’t talk to my sons about the consent issues. I applaud the young ladies who were brave enough to call out their assaults.  I am astounded there is no HR in parliament. Why didn’t Julia Gilliard start the department and other women in senior roles ie Julie Bishop?
A
anonymous a year ago