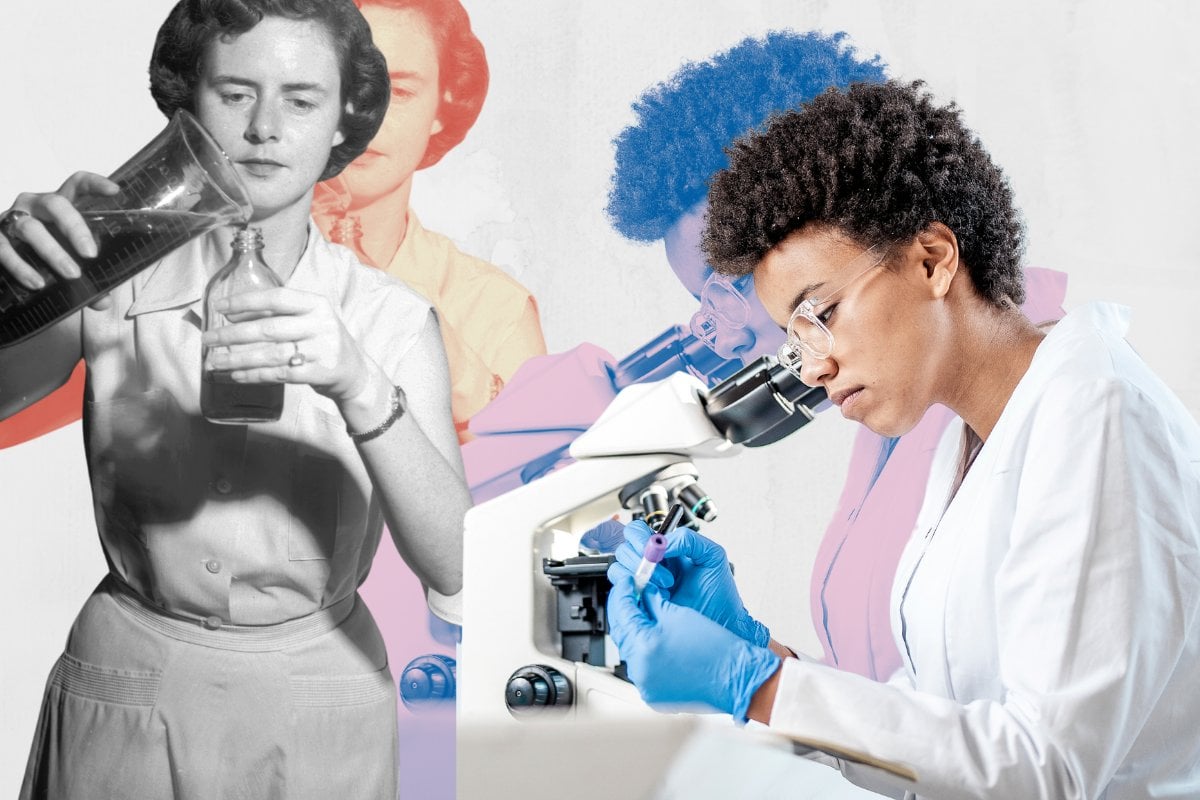 A new report conducted by Professional Scientists Australia has shed light on statistics that paint a frankly horrifying picture of inequality in science. And we need to talk about it. In fact, everyone should be talking about it.

These are women that have the potential to make life-changing and life-saving discoveries, whether that be in medicine, slowing global warming or protecting wildly important eco habitats. But it seems that they are being stunted in their ability to grow and change the world due to three major areas.

Female scientists received just 82.9 per cent of the remuneration received by their male counterparts. That’s a 17.1 per cent gender pay gap - well above the national average of 13.9 per cent. Beyond that, 27 per cent of female scientists had also not received a pay increase in the last year, meaning pay growth was also behind schedule for these workers.

For those who prefer to be shocked in dollars rather than percentages, this works out to around $21,000 less in the pockets of women doing exactly the same job as their male colleagues - who are getting pay rises on top of that and further increasing the gender pay gap.

Watch a video imagining if scientists were celebrities. Post continues after video.

40.9 per cent of female scientists have experience gender bias or have been discriminated on the basis of their sex in the workplace over the past three years. This could mean undermining their authority in meetings, stunting their professional development due to gender stereotyping and straight-up exclusion and bullying due to no other reason than them being a woman.

One in five women have experienced sexual harassment at least once in their scientific careers. This is a hideous statistic, and one that we hope to never see. But it’s real, and it’s happening, and people need to know about it.

Funnily enough, the combination of all three of these factors are pushing female scientists out of the industry. The same report from Professional Scientists Australia claims that one in five female scientists were planning on leaving the workforce and bailing on science altogether.

Exhausted, underpaid and about to quit, it seems Australia’s female scientists have had enough.

Side note: How difficult is it to find a job in the middle of a pandemic? The Quicky investigates. Post continues after podcast.

To find out the stories behind these statistics, Mamamia spoke to a handful of female scientists to give them the platform to discuss what needs to change for women in science. All of these remarkable women were recently awarded L'Oréal-UNESCO For Women in Science Australia & New Zealand Fellowships, an initiative that exclusively promotes women in science.

Marzi Barghamadi, an experimental scientist specialising in lithium battery research, notes that despite “more graduated women in STEM subjects than ever before”, it’s a completely different story when “talking about senior positions”. The industry is suffering with a bottom heavy distribution of women in the workforce, with men still holding the majority of management roles.

“This means a lack of female role models for younger generation. You can’t be what you can’t see. And of course, there are the same cliché list of challenges that women have been facing in the workplace for years, such as lower salary and a lack of flexibility.” 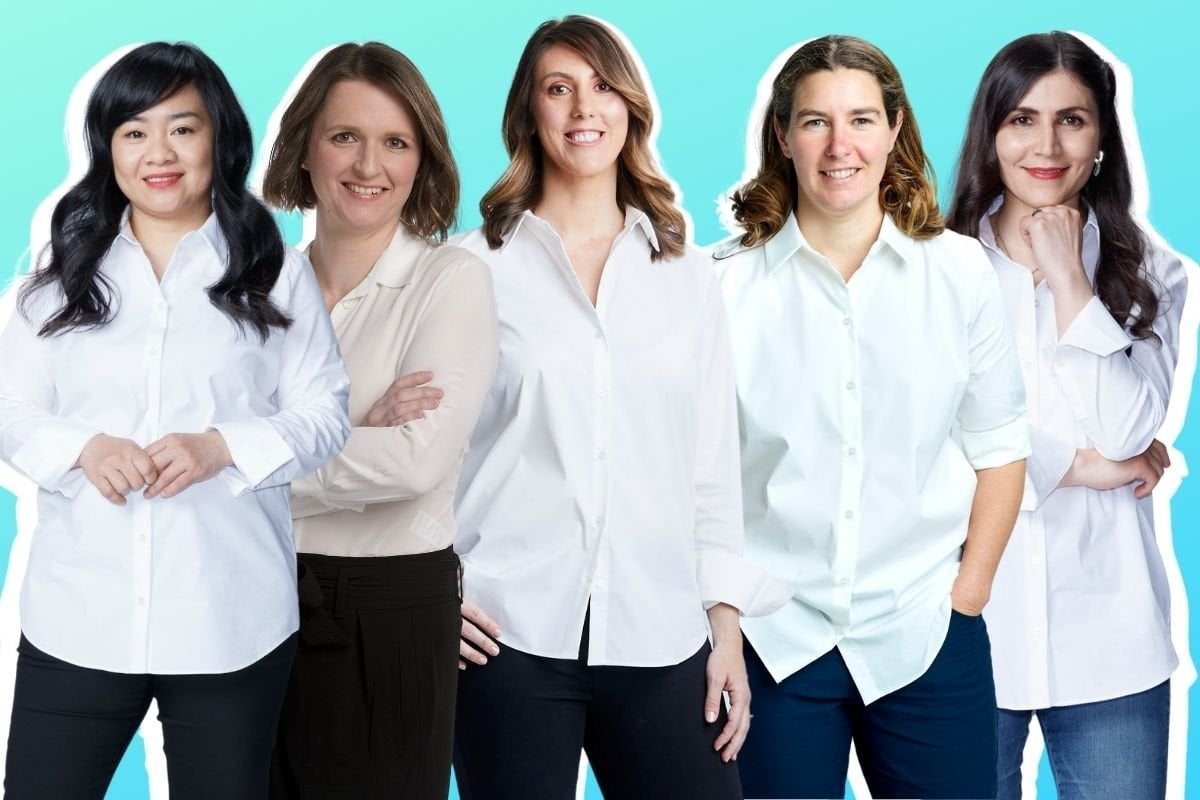 Dr Kate Nguyen, Dr Shari Gallop, Dr Emma Camp, Dr Adele Morrison and Dr Marzi Barghamadi. Image: Mamamia.  Dr Adele Morrison (a climate and fluid physicist) backs this theory up by saying: “While there were actually more women than men at my early career stage, only 17 per cent of senior Australian science researchers are women.” She attributes a large drop off in senior female scientists to the fact that women tend to leave the industry a decade after completing their PhDs to start their families.

While this is a common problem throughout most workplaces, it seems that the “boys club” mentality of some companies in the science sector are deterring women further from coming back to work.

And if they do return, then another hurdle for female progress in science is undoubtedly “the practicality and perception of motherhood,” says Coral Biologist Dr Emma Camp. Flexibility for parents is essential to them furthering their career, so if a whole industry isn’t receptive to that then growth is stunted dramatically.

“Research shows that gender inequality in science has not been self-correcting with time, as may have been hoped. A major challenge is to keep up the push for equality and not take our foot off the pedal.” Dr Shari Gallop.

And how we push for that equality is by opening up more opportunities for female scientists - and not just in a tokenistic way. Dr Kate Nguyen (a chemical and civil engineer) articulates what we all know to be true: That women can rise to any occasion, they just need a seat at the table to do so.

“The main challenge for women in science has never been their ability or enthusiasm, but the right support given to women, so they could have an equal opportunity in their professional activities. It is not about lowering the bar for women. If given the adequate environment, we, women can produce high-quality work.”

Host of The Quicky, Claire Murphy, spoke to Dr Kate Nguyen about the threat of bushfires for this coming summer, which you can listen to here. Post continues after podcast.

So, where’s the good news?

Luckily there are initiatives that are working hard to improve women’s experiences when working in science. The government has put a particular focus on getting more females into science, with grants and programs trying to facilitate women's careers built off STEM subjects. There was even an Advancing Women in STEM Strategy rolled out and headed up by federal science minister Karen Andrews.

However, one standout plan is the L'Oréal-UNESCO For Women in Science fellowship, identifying female Australian and Kiwi scientists that are making waves in their industry and giving them $25,000 each. That means they can allocate money towards new equipment, new fields of research and even hiring other women to work on ongoing projects.

Being a firm believer that science really can change the world, L’Oreal has also come up with a great initiative called ‘Girls in Science’, which encourages girls to get passionate about and stuck into science.

Hosting their 2020 Climate Change conference, TODAY host Ally Langdon claims that over her 10 years plus of working with and interviewing scientists and researchers, she found that she was predominantly talking to males.

“When I have come across a female in the field, I found that they’ve typically had to work twice as hard or be twice as smart to get to the place where they are.”

Much like the scientists we spoke to, she attributes the slow take up of STEM subjects at school, university and beyond for girls to a severe lack of female role models in that field. When young girls can’t see versions of themselves in roles, then they are significantly less likely to move into those spaces with confidence.

So, perhaps there is hope for equality in science. But it’s not something society can just sit back and ‘hope’ for. Strong advocacy, great initiatives and a constant breaking of barriers is what’s going to change the landscape and see girls right where they should be: In a position to change the world.