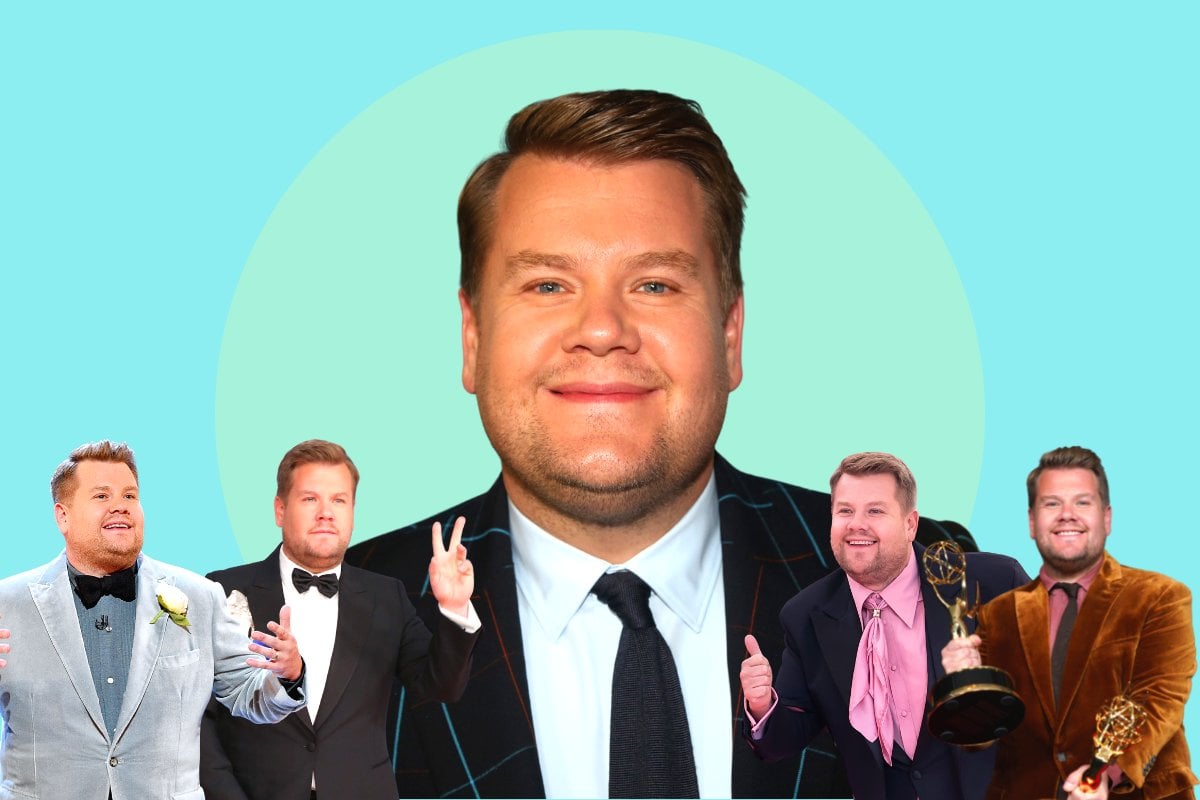 I was perusing Reddit recently, my go-to for questionable celebrity gossip and people asking 'am I the a***hole?' (always yes), when I came across a post that made me laugh out loud.

It was a screenshot from juicy goss Insta account Deuxmoi about the casting of the upcoming Wicked movie. Now, I bloody love Wicked - who doesn't? - so I was excited. The blind post suggested that lots of 'big names' were being considered for the role of the Wizard, but "not James Corden".

Among many of the comments, one person stated: "Angel of Music please keep James Corden out of this movie".

Watch: Lest we forget one of Corden's biggest roles was in... Cats. Post continues below video.

In 11 words, they surmised the thoughts and feelings of the entire sub, and many other vocal pop culture fans right across the internet.

Because James Corden is everywhere, and the people have noticed. He's in all the musicals. He's on stage at all the award shows. He's dancing in the streets of Los Angeles dressed as a mouse. And my main question is, quite simply, why?

Corden's career up until this point is actually quite spectacular, and with every new role he takes on, that simply becomes more true.

He began his career in theatre at 18, starred in British TV advertisements in the late 1990s and had small television roles throughout the early 2000s. He guest starred on the extremely popular Little Britain, and starred in British drama Fat Friends from 2000 until 2005.

But his 'big break' came with his own series, sitcom Gavin & Stacey, which he co-wrote and starred in from 2007 until 2010. For this, he won many awards including multiple BAFTAs, but he's even better remembered for the one he didn't win.

In 2008, Corden drew the ire of Brits - of which understatement is such a way of life it has its own Wikipedia page -  after moaning about Gavin & Stacey not being nominated for the 2008 best comedy BAFTA award. 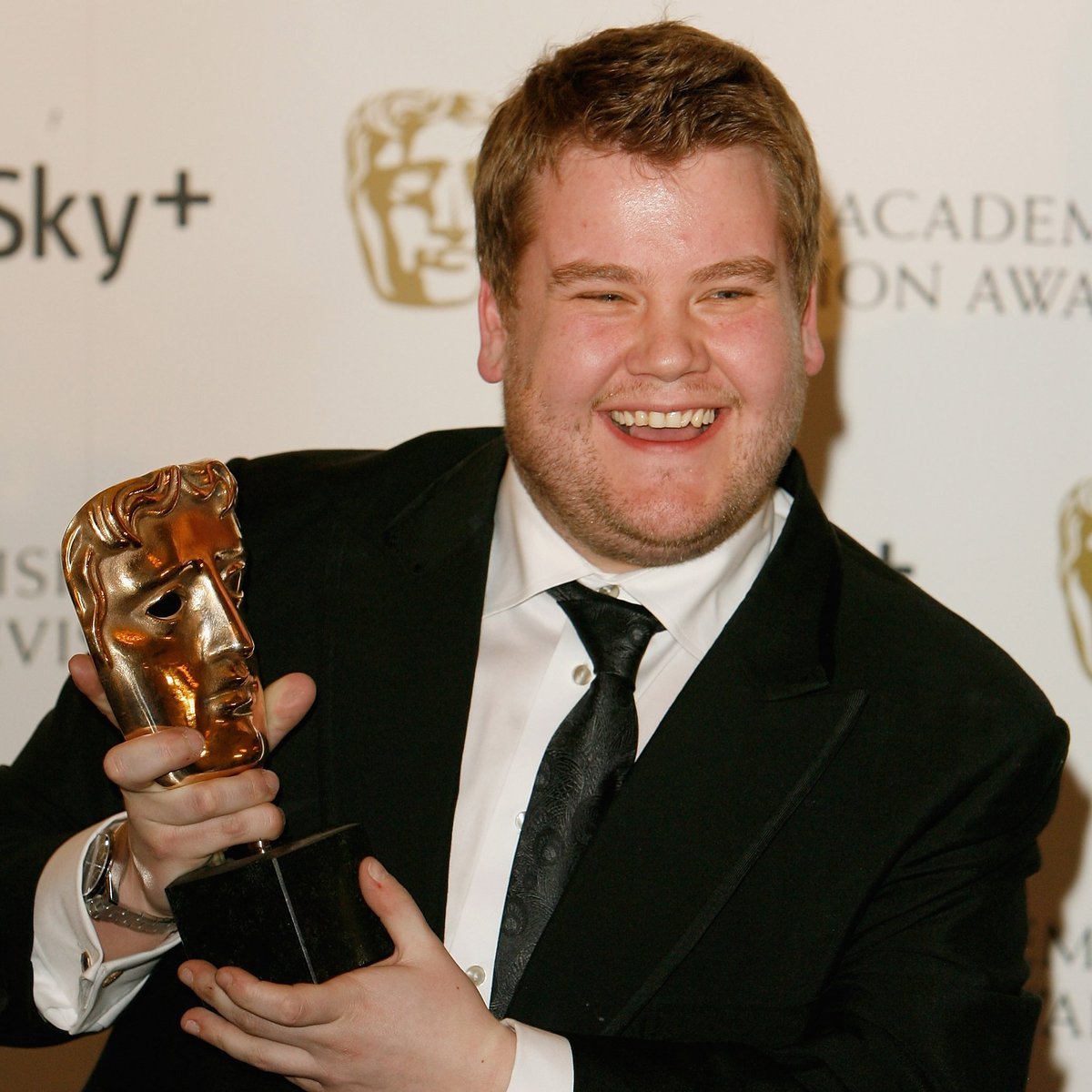 In a January 2020 interview, he admitted he began to "behave like a brat" earlier in his career, especially around this time.

"I started to behave like a brat that I just don't think I am," he told the New Yorker.

"It's so intoxicating, that first flush of fame. And I think it's even more intoxicating if you're not bred for it."

That makes sense. He's hardly the only person to let fame get to his head. But the interview's presumption that Corden had put that behaviour behind him was called into question a few months later, when Corden became the internet's new favourite enemy, after the 'cancellation' of Ellen DeGeneres.

There have been articles about Corden's perceived 'bad' attitude floating around from 2017, and in 2010 there was commentary about a very awkward, very public run in he had with Sir Patrick Stewart.

In 2019, Corden made an appearance on Reddit's AMA (Ask Me Anything) thread to promote a special edition of Carpool Karaoke, but it massively backfired.

Comments calling Corden names hijacked the thread. With more than 700 comments, Corden and his team were reportedly only able to answer about three fan questions before leaving the conversation.

One person claimed Corden had "allegedly showed up to a WGA [Writer's Guild Of America] union meeting for late night writers with an executive producer and none of the writing staff" and advocated less pay for new writers under their union-negotiated minimum wage.

Corden had previously denied this was the case. 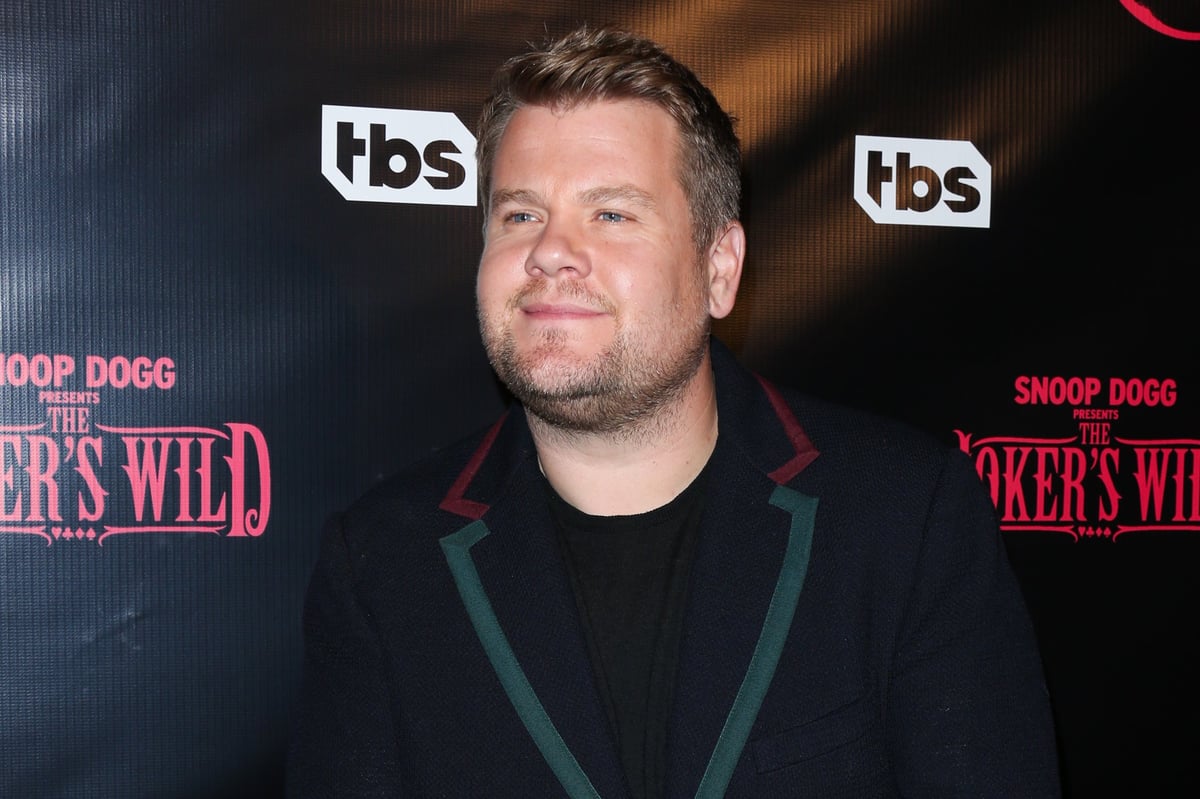 In October 2020, Vanity Fair published a profile on comedian Eric Andre in which he criticised cancel culture.

"Boohoo, Ellen was mean. Who gives a s***? I never thought she was nice! She seems like she’d be like, 'F***ing get me a coffee! Now!' Is that what cancel culture's devolved to? 'That guy's not nice!' James Corden is f***ed if that's the only criteria to get called out," he said.

Within days of the Andre interview, Deuxmoi (which, for the uninitiated, shares mostly anonymous messages about celebrities/pop culture, sent in by followers) had posted several stories alleging negative interactions with Corden.

Deuxmoi does not confirm statements, and they all came from anonymous Instagram users, but allegations included Corden being rude to wait, airline and restaurant staff. 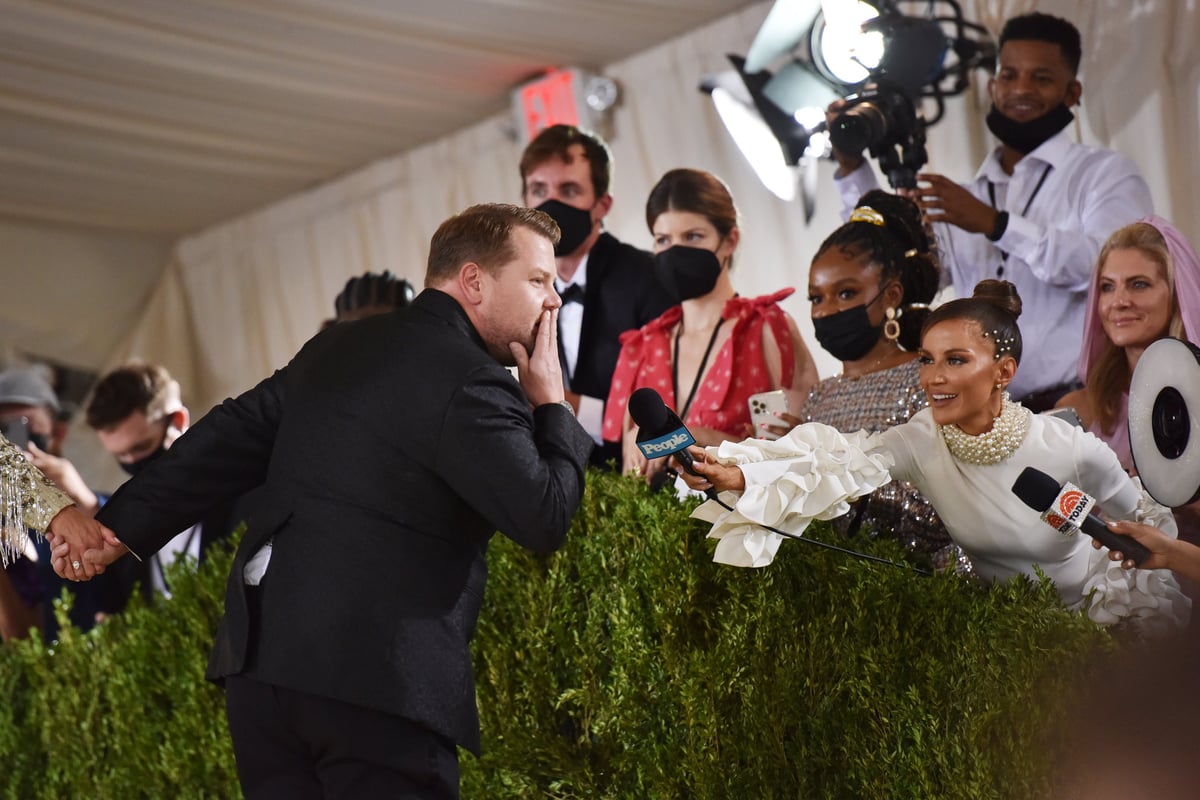 We should never tolerate rude behaviour, but Hollywood is hardly the place to look for a moral high ground.

It's an industry where secrets and abuse have been able to thrive for decades on end, so the fact that someone within the machine is maybe rude to the person serving them food is so unremarkable that it barely warrants an eyebrow raise outside the messy walls of Twitter and Reddit.

In that sense, the fact that Corden's career has faced no repercussion makes sense.

The more baffling angle appears when you look deeper at his filmography.

Among his roles are children's films The Emoji Movie and Peter Rabbit.

The Emoji Movie was an absolute critical bomb, and in one review of Peter Rabbit, a reviewer labelled Corden as "appallingly irritating". I haven't seen the film so I cannot comment on this, but it is not an isolated dig.

His three most recent non-animated roles are as Bustopher Jones in Cats, Barry Glickman in The Prom and James in Amazon's Cinderella remake.

A post shared by The Late Late Show (@latelateshow)

The Prom, a Netflix movie based on the 2018 Broadway musical of the same name, received mixed reviews, though they appeared glowing in comparison to Cats. The consensus was however, that this was in spite of Corden, rather than thanks to him.

He starred as Barry Gluckman, a camp, narcissistic Broadway actor. Corden is a straight man, so the decision to cast him as a gay character caused criticism. Some viewed his performance as perpetuating and capitalising on stereotypes of gay men.

Despite the negativity, Corden received a Golden Globes nomination for the performance. He was the only person in the cast, which also included Meryl Streep, to receive recognition.

Corden memes have popped up in my social media feeds since at least the late 2019-Cats era, and enjoyed a resurgence with his involvement in Cinderella. The idea to reinterpret the fairytale came from him, and he also produced the film. It has a 43 per cent rating with critics on Rotten Tomatoes.

The memes were taken to new heights after he and the cast staged a performance while drivers waited at a red light on the streets in LA to promote the movie.

James Corden must have some real dirt on some powerful people in Hollywood to keep getting cast in every goddamn movie. https://t.co/P13i9Fv4Nd

The year is 2021. You've just survived a global pandemic that has forever shaped the future of the human race. You drive home from your poorly paid job as you continue to question your existence. At the traffic lights James Corden is dressed as a mouse and dances at you. Why.

despite seeing that james corden dancing in a rat suit video posted hundreds of times today, i have not pressed play once, thus ensuring my entrance to heaven

No casting for Wicked has been announced, but even the possibility of a role for Corden had people concerned enough to flood Twitter.

James Corden is going to be in the Wicked movie? pic.twitter.com/z7CiloVObx

So why won't Hollywood give up on him?

Who does James Corden have dirt on that be gets cast in everything? How is he now in the Wicked film? pic.twitter.com/HMB3b1pYSD

There's certainly an element of oversaturation to blame for all the Corden hate, as well as bandwagoning. It's cool to slate Corden right now, which is clear by the thousands of likes on Tweets making fun of him.

And he has, of course, had plenty of genuine success.

Corden has been hosting his late night TV show since 2015. If I had to choose a Corden to watch, it would be this one. Here, his form of comedy - based on viral bits and his buddy relationships with major celebrities, especially the men of One Direction - results in continuously solid ratings.

From a business perspective, this must also be a very attractive asset to casting directors. Of course he's going to publicise his own work on his own show, which is a huge marketing win.

But while he clearly has audience appeal on The Late Late Show, that doesn't appear to crossover to film. The memes, the reviews, and the box office are proof of this.

The comedian, actor and late-night talk show host is one of the busiest people in Hollywood, but he definitely does not have the Midas touch.

So, as those in charge of casting continue to favour him, we're all still here wondering... why?

Reply
Upvote
3 upvotes
I think a big part of it is probably overexposure. The whole feeling of "ugh, him again?". He seems to be everywhere, but (to me, at least) doesn't necessarily have the talent to justify it. I mean, he's fine, I quite liked him in Doctor Who, and his Carpool Karaoke bits can be quite funny. But I can see why people would be annoyed by the gay stereotype in Prom. Something similar happened with Anne Hathaway a while back (and a lot of others too), one minute she was everywhere and everyone loved her, next thing people were sick to death of her. Also happened to Jennifer Lawrence, I think, although in those cases I don't think there were ever accusations of rudeness or treating people badly. Bit of the old Tall Poppy syndrome, I guess.
M
mamamia-user-482898552 a month ago

Reply
Upvote
@rush I don't think over-exposure and tall poppy syndrome are the same thing. Studios and publicists often pay for personalities to literally saturate media and press, to the point that they win an award or make box office ratings (etc).
That very contrived strategy also has a knock-on effect of everyone getting sick of said personality - moreso if they give off vibes of being fake or unlikeable despite the accolades - those personalities become quite polarising (see: the Kardashians). That's quite distinct from disliking someone solely for being successful. Many in the former camp are really only successful because they have a great publicist and marketing team, rather than extraordinary talent per se.

Reply
Upvote
2 upvotes
@rush We do seem to get a surge of WAG focused stories from time to time here which just seem so relentless it gets tiring and has the opposite effect - I'm not going to mention any names here it would be Judd rude.
M
mamamia-user-482898552 a month ago